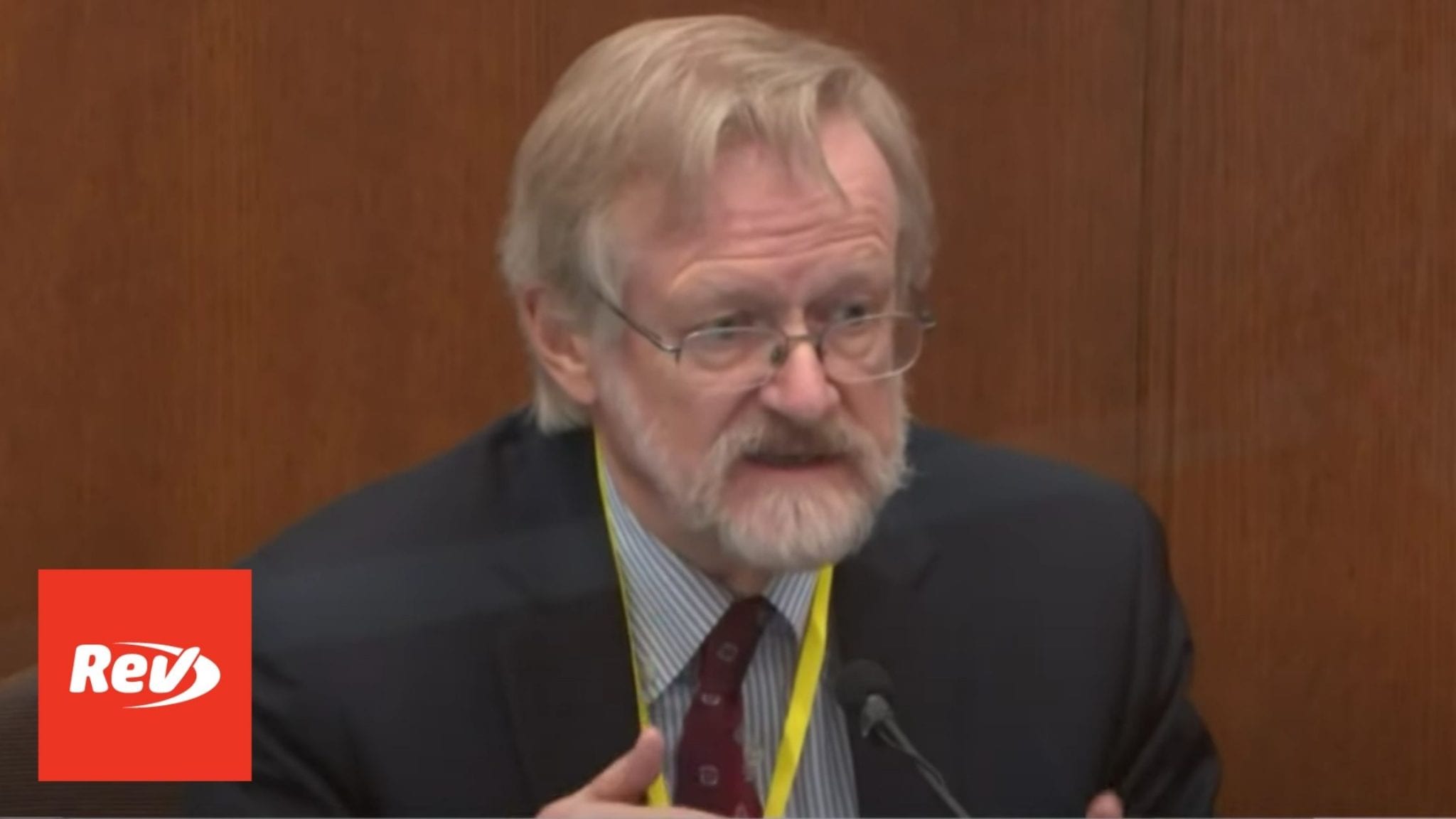 Pulmonology expert Dr. Martin Tobin testified during Derek Chauvin’s trial for the murder of George Floyd on April 8, 2021. Tobin explained the reasoning for Floyd’s “low level of oxygen.” Read the transcript of his testimony remarks here.

Prosecution: (00:51)
This represents a snapshot in time, as you told us. Did the officers’ positions change over time as they were there on the ground?

Prosecution: (01:14)
And was it something you factored into your analysis then?

Prosecution: (01:22)
Did you consider where Mr. Chauvin’s left knee was during the encounter?

Dr. Martin Tobin: (01:26)
Yes. Officer Chauvin’s left knee is virtually on the neck for the vast majority of the time.

Prosecution: (02:10)
Did you focus on the first five minutes and few seconds?

Dr. Martin Tobin: (02:13)
Yes. I focused on the first five minutes, three seconds, because that is up to the time that we see evidence of brain injury.

Prosecution: (02:28)
If Mr. Chauvin’s right knee was on his back from time to time, at other times, it was placed where in your observation?

Dr. Martin Tobin: (02:37)
It was placed on his arm and then rammed into Mr. Floyd’s left chest, so really whether you’re making a distinction of whether the knee is on the chest per se or whether it’s on the left arm and rammed in against the left chest, from the point of view of breathing, the effects are extremely similar.

Prosecution: (03:14)
I wanted to turn back to the notes that the number one here that written down for the reasons you told us for Floyd’s low oxygen, Mr. Floyd’s low oxygen. Handcuffs and the street. To talk about the first ones.

Prosecution: (03:39)
Could you first, Dr. Tobin, tell us how these various mechanisms, the four that you’ve discussed, handcuffs on the street, knee on the neck, prone position, knee on the neck, back, knee on the back, arm, and side. How do those mechanisms fall into your work of either respiratory physiology or clinical medicine?

Dr. Martin Tobin: (04:01)
They don’t have an awful lot to do with clinical medicine, but they are directly related to my work in physiology, so in understanding the forces that the body has to cope with. These are crucial in terms of the various forces that are involved in physiology.

Prosecution: (04:22)
Then turning to the first one in handcuffs and the street, the very first one. What is the fact of the handcuffs in the context of what happened to Mr. Floyd?

Prosecution: (05:57)
Mr. Floyd is pancaked between the pavement underneath him and then force on top of him.

Prosecution: (06:04)
ow, could you help us to explain how this mechanism, the handcuffs and the street, how does that explain the shallow breathing that you’ve described?

Dr. Martin Tobin: (06:12)
Yeah, so this gets back to how we breathe, and this is fairly simple. The way we breathe, we have two big muscles that help us with breathing. We have the diaphragm, and we have the rib cage muscles. The diaphragm does about 70% of what we need for breathing, and about 30% of it comes from the rib cage. And when the diaphragm contracts or the rib cage contract, they expand the chest. And when you expand the chest, then air flows in from outside, and it’s coming in. And that’s all that happens on inspiration.

Dr. Martin Tobin: (06:53)
But to expand the chest, there’s two crucial actions that have to happen, and we’ve referred to these by the terms pump handle and bucket handle. Bucket handle is simple. If you have a regular bucket that you carry water with and you lift up the handle of the bucket, the handle comes up like this. And so when you contract your diaphragm, you are performing a bucket handle movement on the rib cage. So you contract your diaphragm like that, and each time as you inspire, you can see it yourself. As you inspire, each of you there in the jury, you inspire, you see that your rib cage is going outwards like that. That’s a bucket handle movement.

Dr. Martin Tobin: (07:39)
The second movement that you have is called the pump handle, and this reflects to an old water pump that would be in the yard for pumping out water. And so you have the handle at the top of the pump, and you lift up the handle of the pump each time, and the water comes out the spout at the bottom, so you’re filling up, get your container of water. With that action, you’re lifting up here. This refers to the front to back movement of the chest wall, so with the pump handle, your chest goes out with each breath. And so you can do it yourself. As you take a deep breath, you can feel that, front to back, you’re expanding your chest. The front to back expansion of your chest is with your pump handle.

Prosecution: (09:00)
Doctor, in this case, were you able to observe whether Mr. Floyd’s breathing was impacted by the handcuffs and the placement on the street?

Dr. Martin Tobin: (09:11)
What I observed is, particularly, is in terms of the hands of the police and the handcuffs, particularly on the left side. They were forcing his left wrist up into his chest, forcing it in tight against his chest, forcing it high up. And you have to keep in mind that the opposite side of this is the street, so he was being squashed between the two sides. And so this meant that he couldn’t exert his pump handle because, I mean, the street totally blocked his pump handle. There was no way he could do any front to back movement. And again, the way they were pressing in on the back, there was absolutely no way that he could do any front to back movement.

Dr. Martin Tobin: (09:59)
Then, in addition, because of the knee that was rammed in against the left side of his chest … Sometimes the knee was down on the arm or in against the chest, so this would have the same effect. Basically on the left side of his lung, it was almost like a surgical pneumonectomy. It was almost to the effect as if a surgeon had gone in and removed the lung. Not quite, but along those lines. There was virtually very little opportunity for him to be able to get any air to move into the left side of his chest. So he was going to be totally dependent on what he’d be able to do with the right side.

Prosecution: (10:43)
Have you selected any footage from the body-worn cameras that you feel depicts Mr. Floyd’s struggles to breathe?

Prosecution: (10:51)
I’m going to show you what’s been marked as state’s exhibit 944. And first, would you describe what it is?

Prosecution: (11:05)
Dr. Tobin, the jurors aren’t seeing it yet. It’s just describing it for the record.

Dr. Martin Tobin: (11:15)
Yeah. Okay. That’s fine. What I’m seeing is that his left hand is being grabbed by the police officers, so that’s a handcuffed left hand and it’s being pushed into his chest, so he’s just not able to expand that. In addition you, what I’m seeing-

Dr. Martin Tobin: (12:01)
I mean, now you’re able to see here with the yellow arrow, you’re able to see that the officer is holding Mr. Floyd’s left hand. He’s holding it very firmly. There’s a very firm grasp on it. And then Mr. Floyd’s left hand is being pushed in against his chest. Also, we’re able to see just on the side that Officer Chauvin’s knee is coming in, and that’s compressing in against his side as well. The ability to expand his left side here is enormously impaired.

Dr. Martin Tobin: (12:39)
And also you’re seeing that the size of the chain between the two, the right side and the left side, is very short, so his whole left arm is also being pulled over, and so it’s preventing him also from expanding the right side. I’ve been focusing on the bucket handle and the pump handle on the left, but you can also see here that these are impaired, his ability to expand his chest. And of course, the key factor you must keep that isn’t kind of in a sense seen here in one sense is the street. The street is what is having a huge effect because he’s jammed down against the street. And so the street is playing a major role in preventing him from expanding his chest.