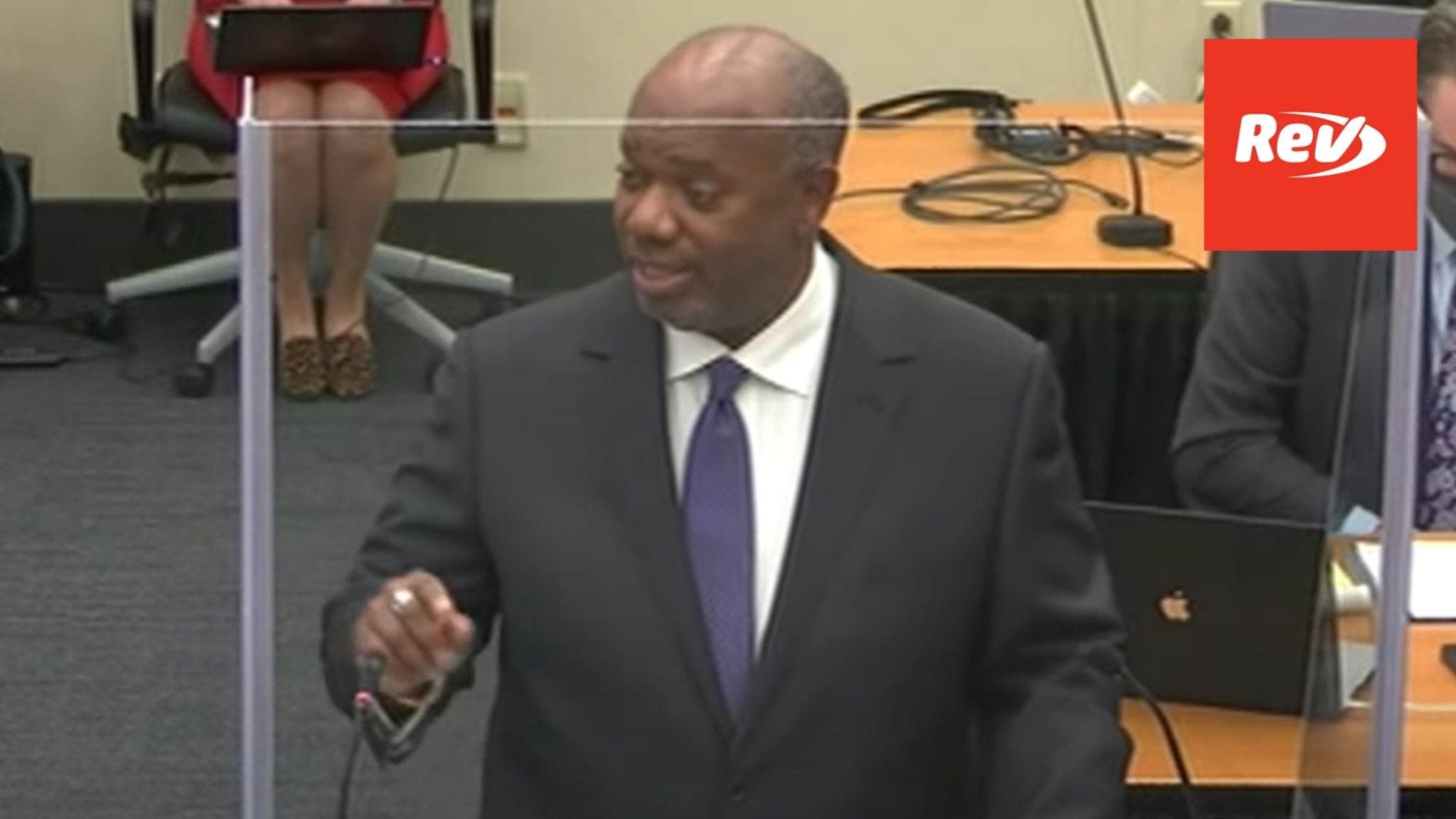 Prosecution attorney Jerry Blackwell gave his opening statement during Derek Chauvin’s trial for the murder of George Floyd on March 29, 2021. Read the transcript of the full statement remarks here.

Jerry Blackwell: (00:00)
May it please the court? Counsel. Ladies and gentlemen of the jury, good morning. My name is Jerry Blackwell, and I apologize for talking to you through this plexiglass, but it’s probably the least of the gifts that the pandemic has given us. You’re going to learn in this case a lot about what it means to be a public servant and to have the honor of wearing this badge.

Jerry Blackwell: (01:20)
But you’re also going to learn that the officers take an oath when they become police officers. They take an oath that I will enforce the law courteously and appropriately. And as you will learn as it applies to this case, never employing unnecessary force or violence. And not only that, I recognize the badge of my office as a symbol of public faith and I accept it as a public trust to be held so long as I am true to the ethics of police service.

Jerry Blackwell: (02:00)
Symbol of public faith, ethics to police service, sanctity of life, all of this matters tremendously to this case because you will learn that on May 25th of 2020, Mr. Derek Chauvin betrayed this badge when he used excessive and unreasonable force upon the body of Mr. George Floyd, that he put his knees upon his neck and his back grinding and crushing him until the very breath, no ladies and gentlemen, until the very life was squeezed out of him. You will learn that he was well aware that Mr. Floyd was unarmed, that Mr. Floyd had not threatened anyone, that Mr. Floyd was in handcuffs, he was completely in the control of the police, he was defenseless.

Jerry Blackwell: (03:00)
You will learn what happened in that nine minutes and 29 seconds, the most important numbers you will hear in this trial are 9:29, what happened in those nine minutes and 29 seconds when Mr. Derek Chauvin was applying this excessive force to the body of Mr. George Floyd. We have two objectives in this trial, ladies and gentlemen, the first objective is to give Mr. Chauvin a fair trial. Mr. Chauvin has the presumption of innocence. He is presumed to be innocent until proven guilty. We plan to prove to you beyond a reasonable doubt that Mr. Chauvin was anything other than innocent on May 25th of 2020.

Jerry Blackwell: (03:45)
And our second objective ladies and gentlemen, is to bring you the evidence which I’m trying to preview this morning. We are bringing this case, this prosecution against Mr. Chauvin for the excessive force that he applied onto the body of Mr. George Floyd for engaging in behavior that was eminently dangerous in the force that he applied without regard for its impact on the life of Mr. George Floyd.

Jerry Blackwell: (04:47)
He has one knee on his neck and the knee on his back is intermittently off and on, on his back as you will be able to see for yourself in the video footage. You will hear Mr. Floyd as he’s crying out. You hear him at some point, cry out for his mother when he’s being squeezed. He was very close to his mother, you will learn. You will hear him say, “Tell my kids I love them.” You will hear him say about his fear of dying, he says, “I’ll probably die this way. I’m through. I’m through. They’re going to kill me. They’re going to kill me, man.”

Jerry Blackwell: (06:15)
And once we have his final words, you’ll see that for roughly 53 seconds, he is completely silent and virtually motionless with just sporadic movements. You’re going to learn those sporadic movements matter greatly in this case, because what they reflect, Mr. Floyd was no longer breathing when he’s making these movements, you will learn about something in this case called an anoxic seizure. It is the body’s automatic reflex when breathing has stopped due to oxygen deprivation. We’ll be able to point out to you when you’ll see the involuntary movements from Mr. Floyd, that are part of an anoxic seizure.

Jerry Blackwell: (06:56)
Not only that you’re going to learn about something that’s called agonal breathing. When the heart has stopped, when blood is no longer coursing through the veins, you will hear the body gasp as an involuntary reflex. We’ll point out to you when Mr. Floyd is having the agonal breathing again, as a reflex, involuntary reflex to the oxygen deprivation. So we learned here that Mr. Floyd at some point is completely passed out. Mr. Chauvin continues on as he had, knee on the neck, knee on the back. You’ll see he does not let up and he does not get up for the remaining, as you can see three minutes and 51 seconds.

Jerry Blackwell: (07:41)
During this period of time, you will learn that Mr. Chauvin is told that they can’t even find the pulse of Mr. Floyd. You’ll learn he’s told that twice. They can’t even find the pulse. You will be able to see for yourself what he does in response. You will see that he does not let up and that he does not get up. Even when Mr. Floyd does not even have a pulse, it continues on, it continues on ladies and gentlemen, even after the ambulance arrives on the scene. The ambulance is there and you’ll be able to see for yourself what Mr. Chauvin is doing when the ambulance is there. You can compare. You’ll be able to compare how he looks in this photograph to how he looked in the first four minutes and 45 seconds.

Jerry Blackwell: (09:11)
And you will see it wasn’t until such time as they start, they want to move the lifeless body of George Floyd onto the gurney only then does Mr. Chauvin let up and get up and you’ll see him drag Mr. Floyd’s body and unceremoniously cast it onto the gurney. And that was for a total of four minutes and 44 seconds. You can see here that for the first four minutes and 45 seconds you’ll learn that Mr. Floyd was calling out crying for his life. And ladies and gentlemen, not just Mr. Floyd, you’re going to hear and see that there were any number of bystanders who were there, who were also calling out to let up and get up such that Mr. Floyd would be able to breath and to maintain and to sustain his life.

Jerry Blackwell: (10:02)
But then for the remaining four minutes and 44 seconds, Mr. Floyd was either unconscious, breathless or pulseless, and the compression, the squeezing, the grinding went on just the same for the total of nine minutes and 29 seconds. You’re going to learn in this case quite a lot about the Minneapolis Police Department’s use of force policy. What you’re going to see and learn a lot about is what is the standard for applying force against individuals, the use of force policy. You will learn the Minneapolis Police Department employee shall only use the amount of force that is objectively reasonable in light of the facts and circumstances. The force used shall be consistent with current Minneapolis Police Department training.

Jerry Blackwell: (10:59)
What you’ll learn ladies and gentlemen, is that the use of force must be evaluated from one moment to the next moment. From moment to moment, what may be reasonable in the first minute may not be reasonable in the second minute, the fourth minute or the ninth minute and 29 seconds, that it has to be evaluated from moment to moment. You’ll also learn that the Minneapolis police are precluded, not allowed to use any more force that is necessary to bring a person under their control. They can’t use any more restraint than is necessary.

Jerry Blackwell: (11:37)
You’re going to meet an expert, his name is Jody Steger. He’s a Los Angeles Police Department Sergeant, and a use of force expert. He’s going to tell you that the force that Mr. Chauvin was using was lethal force. It was force that was capable of killing a human or putting his or her life in danger. The evidence is going to show you that there was no cause in the first place to use lethal force against a man who was defenseless, who was handcuffed, who was not resisting, that there’s no cause to use that force in the first place. You’re going to hear from Minneapolis police Sergeant, David Pleger, who’s going to come and talk with you.

Jerry Blackwell: (12:24)
He was the officer on the scene. So he arrived at the scene after this took place. He is going to tell you that the force against Mr. Floyd should have ended as soon as they put him on the ground in the first place, meaning that the 9:29 should not have been even a one, much less than 9:29. And that went on for way too long, he will tell you in terms of the restraint on the ground and the manner of the restraint for Mr. Floyd. You’re also going to learn about another very important policy in Minneapolis Police Department that’s a core principle of policing. You will hear this phrase that police have to live by in terms of how it is they relate to the public, in your custody is in your care. In your custody is in your care.

Jerry Blackwell: (13:16)
Meaning that if you, as an officer have an individual, a subject that’s in your custody, it is your duty to care for that person. And you will learn that caring ladies and gentlemen is not a feeling. It’s a verb. It’s something you’re supposed to do to provide care for that person. You are going to hear from any number of police officers who will talk about this duty to provide care. Officer Nicole McKinsey, who was the Minneapolis Police Department medical support coordinator, you’ll hear from Sergeant Kerra Yang, the NPD crisis intervention coordinator. In your custody is in your care.

Jerry Blackwell: (13:56)
You’re going to learn that when Mr. Floyd was unconscious, that when he was breathless, when he did not have a pulse, that there was a duty to have administered care, to let up and get up, you will learn. You will listen to Minneapolis police commander, Katie Blackwell, no relation to my knowledge, but you will hear from Katie Blackwell and she’s going to tell you about the training that Mr. Chauvin received. You’re going to hear that he was a veteran on the Minneapolis Police Department for 19 years, had been trained in CPR multiple times at the time.

Jerry Blackwell: (14:38)
And you’ll be able to see for yourself that when Mr. Floyd was in distress, Mr. Chauvin wouldn’t help him, didn’t help him. But you’re also going to see that he stopped anybody else from being able to help him. You will learn that amongst the bystanders was a first responder, a member of the Minneapolis Fire Department who was trained in administering first aid and emergency care. She’s going to come and talk with you. Her name is Genevieve Hanson. She wanted to check his pulse. She wanted to check on Mr. Floyd’s wellbeing. She wanted him to let up and get up.

Jerry Blackwell: (15:17)
She did her best to intervene, to be able to act, to intercede on George Floyd’s behalf and you’ll be able to see for yourself when she approached Mr. Chauvin on top of George Floyd with both of his knees, reach for his mace in his belt and pointed in her direction.