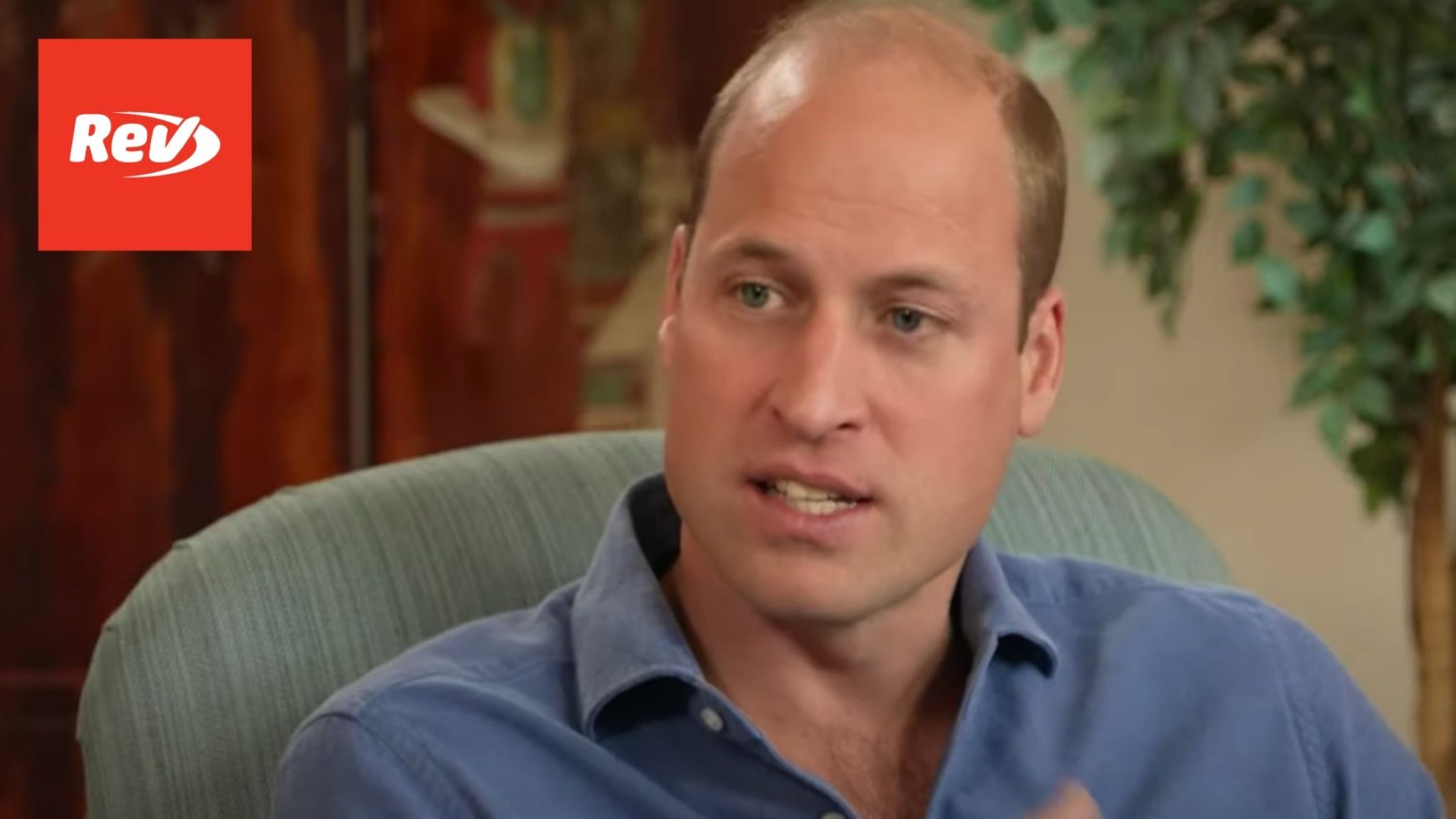 Prince William was interviewed on BCC on October 14, 2021. He said we need the “greatest brains and minds fixed on trying to repair this planet, not trying to find the next place to go and live.” Read the transcript of the interview here.

Prince William : (00:01)
It’s been in the back of my mind for quite a while, the whole climate change debate, environmental issues, growing pollution. So I’ve always felt very strongly about it and I’ve been watching very carefully what others have been doing. And for me, over the last few years, the urgency and the positivity, particularly the positivity around the debate has been missing. It’s been very negative. Understandably, it’s such a large issue that everyone feels completely overwhelmed by the facts, the scale of the problems and things like that.

Prince William : (00:30)
So we wanted to break it down and try and work out how could we add something that was going to create action, create positivity, create energy towards actually solving some of these problems? And I think for me, it formulates and cemented itself a bit in my mind in Namibia about three years ago. I love community conservation and Namibia have been some of the world leaders in community conservation.

Prince William : (00:53)
And for people who don’t know what that is, it’s effectively the locals, wherever you are in the world, taking an interest and management of the wildlife nature, the environmental assets around them. So they very much manage them. They protect them, they nurture them for their own prosperity. And for me that, I came away having met loads of good people there and I felt really inspired, really energized by what I’d seen. But then coming back to the UK and seeing the headlines around the world, and the media also like to concentrate sometimes on the negativity, and I felt you’re losing people every single time you have those headlines.

Prince William : (01:30)
We all get that there’s a really big urgent message. And I’m not saying we shouldn’t talk about the urgency or the big issues, but ultimately if we want to tackle this, if we want to get on the front foot we’ve got to bring people with us and people have got to feel like there’s hope, there’s a chance we can fix this. And that’s what the Earthshot Prize is about, is providing those solutions to some of the world’s biggest environmental problems.

Adam: (01:52)
And so is the dream that the award show calendar goes BAFTA’s, Oscars, Earthshot?

Prince William : (02:03)
Exactly. No, the idea is to make the Earthshot Prize the biggest global environment prize in history. And I think we’ve got time on our side. This is the right time to do this. We’ve got 10 years of critical time where we have to be making inroads and finding these solutions and inspiring people that we can fix these solutions. Because past 2030, things get rapidly worse very quickly.

Adam: (02:28)
And of course it’s called the Earthshot and as soon as you hear Earthshot, you think, “Oh, Moonshot and JFK.”

Prince William : (02:33)
Absolutely. So the original genesis of this is to try to capture the ingenuity and the problem solving and the ambition of the Moonshot. And so based on JFK’s idea to get a man on the moon all those years ago and all the technology and all the advancements that came out of trying to get a man on the moon, like solar panels, CAT scanners, all that sort of stuff, we are trying to galvanize and push solutions forwards.

Prince William : (03:01)
And I think for me particularly, the idea the space race is on at the moment, we’ve seen everyone trying to get space tourism going. It’s the idea that we need some of the world’s greatest brains and minds fixed on trying to repair this planet, not trying to find the next place to go and live. And I think that ultimately is what sold it for me, is that that really is quite crucial. We need to be focusing on this one rather than giving up and heading out into space to try and think of solutions for the future.

Prince William : (03:30)
Do you know what? I have absolutely no interest in going that high. I’m a pilot, but I’m helicopter pilot, so I stay reasonably close to the ground. I’ve been up to 65,000 feet once in a plane, and that was truly terrifying and that’s high enough.

Prince William : (03:43)
Not quite, but the sky’s black above you and you can see the curve of the earth. That’s close enough to space to me because you can come back down. It’s in the orbit so it’s okay.

Adam: (03:52)
Also, I dread to think what is the carbon footprint of a rocket going into space for 10 minutes?

Adam: (03:59)
And is the idea that basically you’re a technological optimist and actually in an ideal world, technology, politics and business can look after all of this stuff for us and you and I, as individuals, maybe actually might not need to change our lives that much?

Prince William : (04:13)
Absolutely, Adam. So that is the key, is it’s about inspiring and finding solutions that can be around us right now and hopefully in the future. Rather than just the debate, concentrating on what we need to give up, what we can’t do, which is very negative. And all of us, as much as we will try, even if all of us did a little bit here and there to change our ways, it still isn’t going to be enough. That’s the thing I think we have to get across, that this is a big challenge.

Prince William : (04:38)
This is a big task we’re about to take on, and I think we need heroes. We need those people who really have got vision, who’ve got ambition, energy to step up, come forwards and give us solutions. And it’s not just about technology, as you pointed out. The Earthshot Prize isn’t just about technology. There are plenty of technological solutions we can celebrate. But it’s about thinking different. It’s about thinking outside the box. It’s about doing stuff in a different way that makes us richer, healthier and happier in the future.

Adam: (05:04)
And you talked about future generations. We’re always then in this debate talking about what it means for our kids. I don’t have kids. You have kids. What do you say to your children about this?

Prince William : (05:53)
Now, I also believe that the younger generation are going to lead this and are going to dominate this. We can’t not. And wherever we go and speak to young people, they’re all very concerned about the environment. They love it, children love being outdoors. They love getting muddy. They love playing and then chasing and playing sport and all that stuff. And I think they have a truer appreciation of what we’re going to miss and what we’re letting down own than actually many of the adults. And that’s where a bit of the disconnects happening, is that those adults in positions of responsibility are not channeling their inner child to remind themselves, remember how much it meant to be outdoors and what … We’re robbing those future generations of that outdoor childhood.

Adam: (06:34)
Have your children got to the age where they’re starting to nag you about this? Because quite often that’s the way round it works.

Prince William : (06:39)
Yeah. So George at school recently has been doing litter picking, and I didn’t realize. But talking to him the other day, he was already showing that he was getting a bit confused and a bit annoyed by the fact that he went out litter picking one day and then the very next day they did the same route, same time, and pretty much all the same litter, they picked it up back again. And I think that for him, he was trying to understand how and where it all came from. He couldn’t understand. He was like, “Well, we cleaned this. Why has it not gone away?”

Prince William : (07:07)
And if we look at it like that, you start to realize if you go back to the childhood, wow, yeah, this is where we should be at. We’ve got to be asking ourselves these questions. Why is that okay for that litter to come straight back and 24 hours later?

Adam: (07:20)
But is he also then starting to ask questions about how he lives his life and the resources that he uses and what his impact on the planet is?

Prince William : (07:28)
Yeah. I think a definite sense of realization and understanding. So the education piece is really key. So, for instance, not overusing water, being careful with our resources, turning off light switches. Things like that, which was instilled in me growing up. These things we’re now having to extrapolate them bigger and bigger. So yes, he’s acutely aware, more so than the other two at the moment. Charlotte’s just a little bit young. She’s still not quite sure. And actually Louis just enjoys playing outside the whole time. So he lives outside. But I think it is slowly dawning on them that these things matter. But I think when you’re that young, you just want to have fun and enjoy it. And I feel bad, I don’t want to give them the burden of that worry.

Adam: (08:15)
And I suppose, going in the other direction, your dad has been worried about this stuff for a very long time. And actually people used to take the mickey out of him a little bit for it.

Prince William : (08:23)
Yeah, absolutely. I think it’s been a hard road for him. My grandfather started off helping out WWF a long time ago with its nature work and biodiversity. And I think that my father progressed that on and talked about climate change and lot more, very early on before anyone else thought it was a topic. So yes, he’s had a really rough ride on that and I think he’s been proven to have been well ahead of the curve well beyond his time in warning about some of these dangers.

Prince William : (08:54)
But it shouldn’t be that there’s a third generation now coming along having to ramp it up even more. And for me, it’ll be an absolute disaster if George is sat here talking to you or your successor, Adam, in another 30 years time, whatever, still saying the same thing, because by then we’ll be too late.