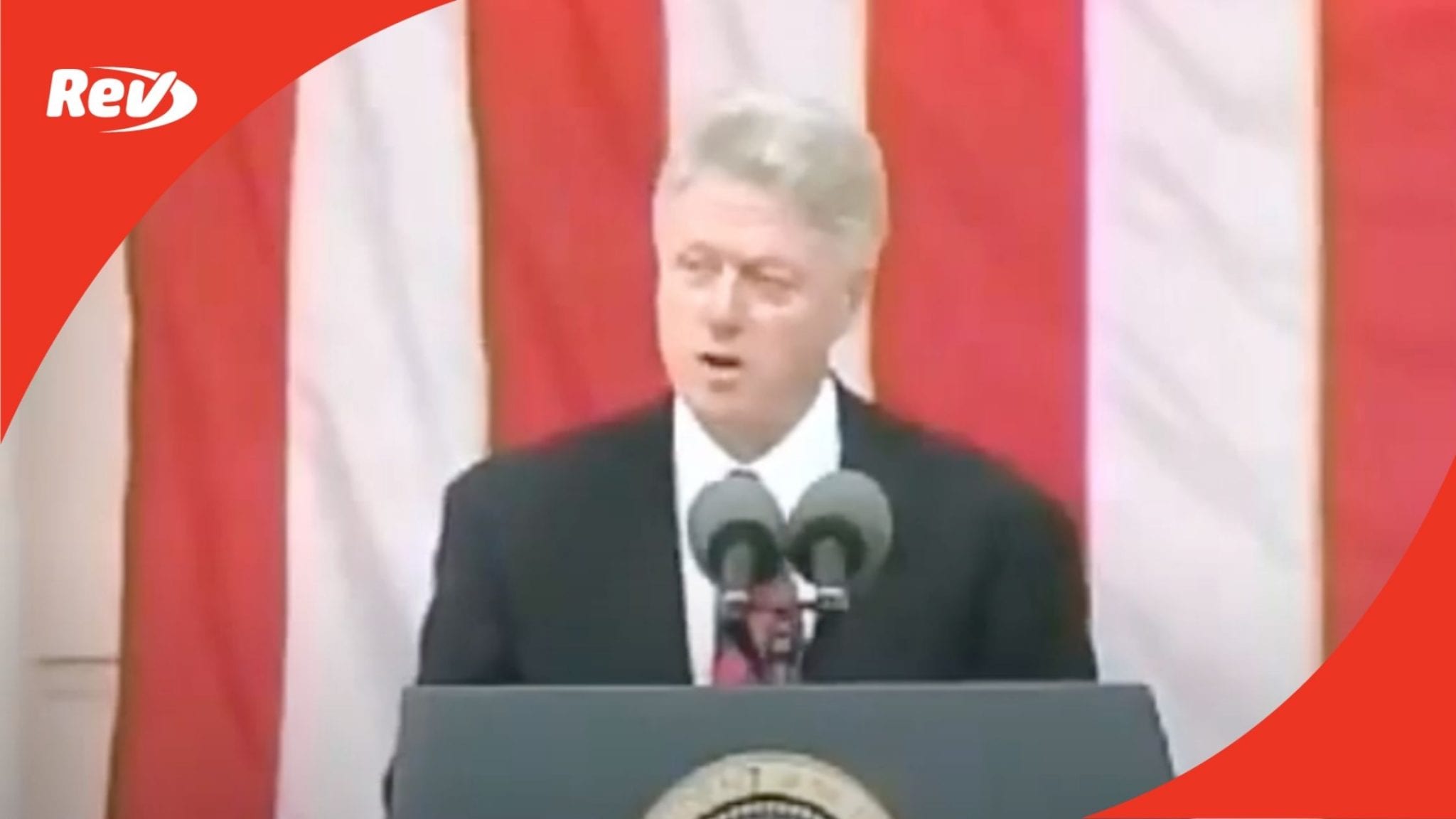 President Bill Clinton gave a Memorial Day speech at Arlington National Cemetery on May 29, 2000. Read the transcript of the speech here.

Bill Clinton: (00:03)
We are blessed again today, together again in this magnificent amphitheater in our national cemetery to remember our fallen heroes. We honor as well all the proud veterans who would’ve made the same sacrifice if God had but called his heroes home in a different order. As you entered the grounds this morning, you saw every gray stone decorated with an American flag. Indeed, this day of remembrance was first known as Decoration Day. Launched in 1868 by the Commander-in-Chief of the Grand Army of the Republic who designated this day for decorating the graves of comrades who died in defense of their country. Some still marked this holiday in the same way. On Thursday before Memorial Day this year and every year for more than 40 years now, the entire regiment of 1200 soldiers of the Third U.S. Infantry has honored America’s fallen heroes by placing American flags before every single one of the more than 260,000 gravestones here at Arlington, then remaining on patrol 24 hours a day all weekend long to make sure each flag remained standing.

Bill Clinton: (01:37)
All across our country in small towns and large cities veterans groups represented here today perform the same sacred ritual. I want to recognize and thank the members of the old guard and the veterans all across America for their patriotism, devotion, and commitment to honoring the original meaning of Memorial Day. I thank them very, very much. Arlington’s hallowed earth embraces the bodies of service men and women from every one of our nation’s wars. Every generation is born a share of the burden of defending the Republic and giving to each succeeding generation the chance for freedom. Presidents Kennedy and Taft are buried here. Generals Pershing and Bradley are buried here. Admirals Halsey and Rickover are buried here, as are John Foster Dulles and Oliver Wendell Holmes, George Marshall, and Audie Murphy. Three of the Marines we remember forever for raising our flag on Iwo Jima, they are buried here. And, of course, all the unknown unsung heroes of more than two centuries of fighting tyranny are buried here. This is sacred soil and the heart and the history of America.

Bill Clinton: (03:25)
Our hearts go out today especially to those are departed veterans left behind, the young women who had to cancel a wedding, young mothers who raised their children alone, mothers and fathers who faced perhaps life’s greatest heartbreak. To all the families who have placed a gold star in their window, I renew our nations enduring pledge. The United States will always honor and never forsake its fallen heroes, we will not abandon their families, and wherever it takes, as long as it takes, we will keep our commitment to seek the fullest possible accounting. This morning, we were honored to receive at the White House the sons and daughters and spouses of service men still missing an action. There is no more compelling way to understand how important our continuous efforts are to the hearts and minds of Americans than to hear it from family members themselves. And that is why I’m pleased to announce to you today that the United States and North Korea have agreed to resume the talks the first week of June in Kuala Lumpur in hopes of resuming recovery operations in North Korea this year.

Bill Clinton: (05:04)
As we prepare to observe the 50th anniversary of the beginning of the Korean War on June the 25th, we reaffirm our commitment to the more than 1.7 million Americans who served in Korea, the more than 36,000 who lost their lives there, and the more than 8,100 still missing. I also want to tell you today about the latest American soldier to come home. Just last week our team of specialists identified finally and official the remains of a soldier of the First Calvary Regiment of the Americal Division whose Huey helicopter was flying in the weeds at 25 feet over Laos in the summer of 1970 when it lost power and crashed. The young soldier died immediately. When others rushed to the scene to bring his body out, they were forced back by enemy fire. When they tried again a short time later, they were again forced back. But finally America returned to recover its own.

Bill Clinton: (06:11)
Years later, with the help of several governments, extensive interviews, excavations, and DNA testing, a positive identification was made, Army Specialist Four John E. Crowley of Williamson, New York forever 20 years old was laid to rest here in Arlington cemetery on Friday in a simple ceremony attended by his mother, brother, cousins, nieces, and nephews. For the life and service of Specialist Crowley, for the sacrifice of his family and every family that has suffered such loss, America is eternally grateful. We are also grateful for the many groups like Rolling Thunder who come to Washington to advocate for our POW MIA families. We hear you. We certainly hear Rolling Thunder when they’re here. We welcome you and we are honored to work with you. To preserve the peace, we must never forget the sacrifices that have paved the way to peace. Four years ago, Carmella LaSpada, a longtime advocate for families who have lost a loved one in conflict, asked a group of school children what Memorial Day means and the children said, “That’s the day the pool opens.”

Bill Clinton: (07:39)
Well, that’s not their fault that, that was their answer. We adults must do more to teach them. That’s why Carmella worked with Lieutenant Colonel Jeff Douglas and so many of you here today to launch a new national commitment to put Memorial back in Memorial Day. So today, for the third straight year, I ask all Americans in a profoundly symbolic and important act of national unity to pause wherever they are at 3:00 p.m. local time to observe a national moment of remembrance for America’s fallen heroes. At that time, the somber tones of Taps, our national requiem, will be played all across America and beyond, in the U.S. Capitol and the Vietnam Memorial, at Ellis island and the Liberty Bell, in VA, hospitals and national parks, on Voice of America, and Armed Forces Network, and in hundreds of places we Americans will be gathering today. When little boys and girls turn to their parents and whisper, “Mommy, Daddy, what’s happening?” a new generation of Americans will have a chance to hear about the defenders of freedom.

Bill Clinton: (09:05)
As we remember their sacrifice, as Secretary Cohen so eloquently pointed out, we must also resolve to fulfill the obligation the rest of us incurred with their sacrifice, to keep America free and strong. If those who fought and died for us could talk to us on this Memorial Day, they might well ask, “America, have you made our sacrifice matter?” At the dawn of a new century, Americans can answer that question with solemn pride. Today, we are fortunate to be the most powerful and prosperous nation on earth with the military respected around the world. We could say, “Yes, America has made your sacrifice matter.” America is at peace and the risk of war that would scar the lives of the whole generation has been vastly reduced. Yes, America has made your sacrifice matter. You fought for freedom in foreign lands knowing it would protect our freedom at home. Today, freedom advances all around the world, and for the first time in all human history, more than half the world’s people choose their own leaders.

Bill Clinton: (10:29)
Yes, America has made your sacrifice matter. You fought to conquer tyranny and bring unity to Europe where more than 100,000 American heroes are now buried. You gave your lives in places like Flanders Field in Normandy, but today Europe is more united, more free, more peaceful than any time in history. We had three new allies in NATO and many new partners across Europe’s old Cold War divide. Central Europe is free and flourishing. Soldiers from almost every European country, the most bitter former adversaries among them, now serve under a single command keeping the peace in Bosnia and Kosovo. Yes, America is making your sacrifice matter. We have more to do. Later today, I will leave for Europe to meet with our partners in the European Union in Portugal and to make the first visit of an American President to Berlin as the capital of a free and undivided Germany. We will continue our work with our European allies for peace and freedom to make their sacrifice matter.

Bill Clinton: (11:56)
I will visit Russia, the former adversary with whom we are trying so hard to build a new partnership and a safer world. Russia has just seen its first transition from one democratically elected government to another in 1000 years of history. For the first time an American President will speak to a democratically elected Russian parliament. As we support those changes, we will continue to push for greater and deeper ones to make their sacrifice matter. I will go to Ukraine, a large country with over 60 million people struggling to cast off the better legacy of communism, located in a strategic place that will determine much of the future of the 21st century to support those who favor freedom and prosperity and stability to make their sacrifice matter.

Bill Clinton: (13:02)
The world of today would not be recognized by those who lived at the beginning of the Cold War. Old adversaries had become allies. Dictatorships have become democracies. Europe is more peaceful and united. The communism we fought to contain has collapsed, reformed, or been discredited around the world. Heartened by our progress toward peace and prosperity, we will pursue the two remaining challenges in fulfilling the age old vision of a Europe peaceful, democratic, and undivided, bringing Southeastern Europe and the former states of the Soviet Union into the community of democracies. On this first Memorial Day of the 21st century, the eighth and last Memorial Day I have had the honor to address the people of this country in this place as President, I give thanks to all those who have stood their ground to defend freedom and democracy and human dignity, and especially to those and their families who made the ultimate sacrifice.

Bill Clinton: (14:26)
Americans never fought for empire, for territory, for dominance, but many, many Americans gave their lives for freedom. As we stand at the dawn of a new century they never saw but did so much to guarantee for us, far from fading into the past, their sacrifice is paving the way to our future. 30, 40, 50 years after our fallen veterans have gone, we can say glory, hallelujah. Your truth is marching on. May God bless you all and God bless America.