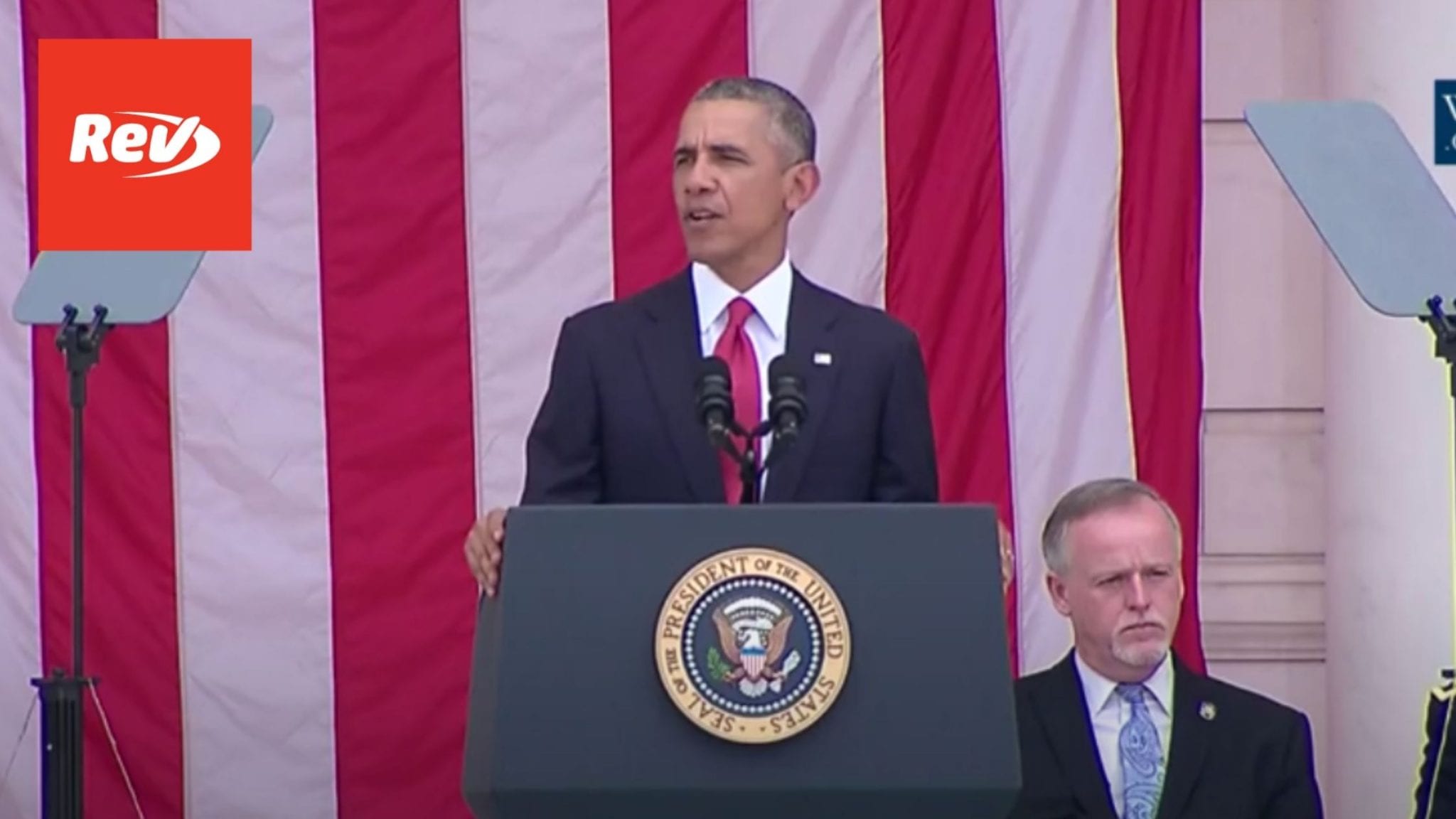 President Barack Obama gave a Memorial Day speech on May 30, 2016. Read the transcript of the speech remarks here.

Barack Obama: (00:01)
I’m honored to be with you once again, as we pay our respects as Americans to those who gave their lives for us all.

Barack Obama: (00:14)
Here at Arlington, the deafening sounds of combat have given way to the silence of these sacred hills. The chaos and confusion of battle has yielded to perfect precise rows of peace. The Americans who rest here and their families, the best of us, those from whom we asked everything, ask of us today only one thing in return, that we remember them. If you look closely at the white markers that grace of these hills, one thing you’ll notice is that so many of the years, dates of birth and dates of death, are so close together. They belong to young Americans. Those who never lived to be honored as veterans for their service, men who battled their own brothers in civil war, those who fought as a band of brothers an ocean away, men and women who redefined heroism for a new generation. They are generals buried beside privates they led, American’s known as Dad or Mom, some only known to God.

Barack Obama: (01:47)
Mr. Hallinan, a Marine who then watched over these grounds, has said, everyone here is someone’s hero. Those who rest beneath this silence, not only here at Arlington, but at veterans’ cemeteries across our country and around the world, and all who still remained missing, they didn’t speak the loudest about their patriotism. They let their actions do that. Whether they stood up in times of war, signed up in times of peace or were called up by a draft board, they embodied the best of America.

Barack Obama: (02:32)
As commander in chief, I have no greater responsibility than leading our men and women in uniform. I have no more solemn obligation than sending them into harm’s way. I think about this every time I approve an operation as president, every time as a husband and father that I assign a condolence letter, every time Michelle and I sit at the bedside of a wounded warrior or grieve and hug members of a Gold Star family. Less than 1% of our nation wears the uniform. And so few Americans see this patriotism with their own eyes or know someone who exemplifies it. But every day there are American families who pray for the sound of a familiar voice when the phone rings, or the sound of a loved one’s letter or email arriving. More than one million times in our history, it didn’t come. And instead a car pulled up to the house and there was a knock on the front door and the sound of taps floated through a cemetery’s trees.

Barack Obama: (03:53)
For us, the living, those of us who still have a voice, it is our responsibility, our obligation to fill that silence with our love and our support and our gratitude. And not just with words, but with our actions. For truly remembering and truly honoring these fallen Americans means being there for their parents and their spouses and their children, like the boys and girls here today wearing red shirts and bearing photos of the fallen. Your moms and dads would be so proud of you, and we are too. Truly remembering means that after our fallen heroes gave everything to get their battle buddies home, we have to make sure our veterans get everything that they have earned from good healthcare to a good job. And we have to do better. Our work is never done. We have to be there not only when we need them, but when they need us.

Barack Obama: (04:55)
30 days before he would be laid to rest a short walk from here, President Kennedy told us that a nation reveals itself not only by the people that produces, but by those it remembers. Not everyone will serve. Not everyone will visit this national sanctuary. But we remember our best in every corner of our country from which they came. We remember them by teaching our children at schools with fallen heroes, names like Dorie Miller Elementary in San Antonio, or being good neighbors in communities named after great generals like McPherson, Kansas, or when we walk down 1st Sergeant Bobby Mendez Way in Brooklyn, or drive across the Hoover Dam on a bridge that bears Pat Tillman’s name.

Barack Obama: (05:45)
We reveal ourselves in our words and deeds, but also by the simple act of listening. My fellow Americans, today and every day, listen to the stories these Gold Star families and veterans have to tell. Ask about who he or she was, why they volunteered. Here from those who love them about what their smile looked like and their laugh sounded like, and the dreams they had for their lives. Since we gathered here one year ago, more than 20 brave Americans have given their lives for the security of our people in Afghanistan. And we pray for them all and for their families. In Iraq in our fight against ISIL, three Americans have given their lives in combat on our behalf. And today, I ask you to remember their stories as well.

Barack Obama: (06:50)
Charles Keating IV, Charlie, Chuck or C4 was born into a family of veterans, all American athletes and Olympians, even a gold medalist. So naturally, Charlie and the love of his life, Brooke celebrated their anniversary on the 4th of July. She called them the huge goofball everybody wanted to be friends with. The adventurer who surfed and spearfished and planned to sail around the world. When the Twin Towers fell he was in high school and he decided to enlist. Joined the SEALS because he told his friends it was the hardest thing to do. He deployed to Afghanistan and three times to Iraq, earning a Bronze Star for Valor.

Barack Obama: (07:36)
And earlier this month, while assisting local forces in Iraq would come under attack, he gave his life. A few days later, one of his platoon mates sent Charlie’s parents a letter from Iraq. “Please tell everyone Chuck saved a lot of lives today.”, it said. “He left us with that big signature smile on his handsome face as always. Chuck was full of Aloha, but was also a ferocious warrior.” So today we honor Chief Special Warfare Officer Charles Keating IV.

Barack Obama: (08:12)
Louis Cardin was the sixth of seven children, a Californian with an infectious wit who always had a joke at the ready to help someone get through a tough time. When his siblings ran around the house as kids, his mom Pat would yell after them, “Watch that baby’s safety margin.” Today, she realizes that what she was really doing was raising a Marine. As a teenager, he proudly signed up. Louis graduated high school on a Friday, three days later on Monday morning, the Marines came to pick him up. That was 10 years ago. One morning this March, a marine knocked on his mother’s door again.

Barack Obama: (08:54)
On his fifth tour at a fire base in Iraq, Louis gave his life while protecting the Marines under his command. Putting others before himself was what Louis did best. He chose to live in the barracks with his buddies, even when he could have taken a house off base. He volunteered to babysit for friends who needed a date night. He just earned a promotion to mentor his fellow Marines. When they brought Louis home, hundreds of strangers lined freeway overpasses and the streets of Southern California to salute him. And today we salute staff Sergeant Louis Cardin.

Barack Obama: (09:34)
Joshua Wheeler’s sister says he was exactly what was right about this world. He came from nothing and he really made something of himself. As a kid, Josh was the one who made sure his brother and four half sisters were dressed and fed and off to school. When there wasn’t food in the cupboard, he grabbed his hunting rifle and came back with a deer for dinner. When his country needed him, he enlisted in the Army at age 19. He deployed to Iraq and Afghanistan 14 times, earned 11 Bronze Stars, for for Valor. Last October, as ISIL terrorist prepared to execute 70 hostages, Josh and his fellow special ops went in and rescued them. Every single one walked free. “We were already dead.”, one of the hostages said. “Then God sent us a force from the sky.” That force was the US Army, including Joshua Wheeler.

Barack Obama: (11:01)
Josh was the doting dad who wrote notes to his kids in the stacks of books he read. Flying home last summer to be with his wife Ashley, who was about to give birth, he scribbled one note in the novel he was reading just to tell his unborn son he was on his way. Ashley Wheeler is with us here today, holding their 10 month old son, David. Ashley says Josh’s memory makes her think about how can she be a better citizen. And she hopes it’s what other people think about too. Today, this husband and father rests here in Arlington in Section 60. And as Americans, we resolve to be better, better people, better citizens because of Master Sergeant Joshua Wheeler.

Barack Obama: (12:28)
A nation reveals not only by the people that produces, but by those it remembers. We do so not just by hoisting a flag, but by lifting up our neighbors. Not just by pausing in silence, but by practicing in our own lives the ideals of opportunity and liberty and equality that they fought for. We can serve others and contribute to the causes they believed in. And above all, keep their stories alive so that one day when he grows up and thinks of his dad, an American like David Wheeler can tell them as well the stories of the lives that others gave for all of us. We are so proud of them. We are so grateful for their sacrifice. We are so thankful to those families of the fallen. May God bless our fallen and their families. May he bless all of you and may he forever bless these United States of America.