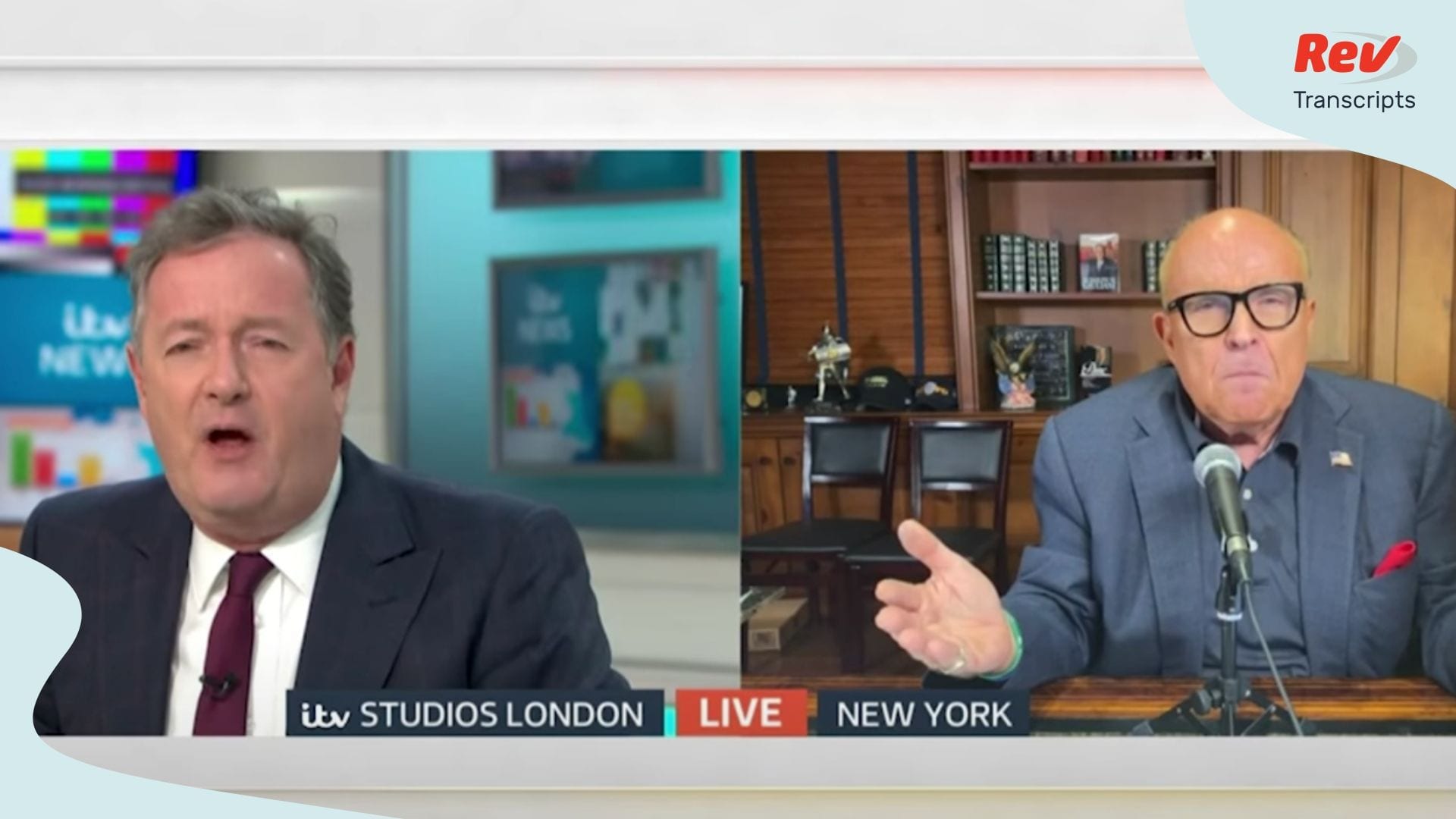 Rudy Giuliani went on Good Morning Britain and got into a testy interview with Piers Morgan about the protests and Donald Trump tweeting “when the looting starts, the shooting starts.” Things got personal with shots at each-other’s careers. Read the transcript here.

Susanna Reid: (00:06)
Just after the September, the 11th attacks and you were being praised for your calm leadership, your cool head in the wake of what had happened. You were even dubbed at one stage, America’s mayor. What do you make of president Trump’s response? Because he has been criticized for not being able to calm the situation down.

Rudy Giuliani: (00:32)
President Trump is criticized for everything by the left-wing media. He has handled it exactly correctly. Immediately he brought the FBI into it. President Obama used to delay weeks before he brought the FBI into it. President Obama had many, many more of these incidents than president Trump. The difference is that the left-wing media, including the international media, treats president Trump in a totally different way and exaggerates all the situations involving him. He expressed immediately his horror at what happened. He brought the FBI into it. He, along with everyone in this country, Republican, Democrat, liberal, conservative, condemns what the police officer did. For example, I don’t believe they’ve been charged harshly enough. I think the Minnesota authorities and Minneapolis authorities have badly mishandled this case, and they should be charged with first degree murder, particularly the police officer who had his knee on the neck of Mr. Floyd while he was being told constantly that the man couldn’t breathe.

Rudy Giuliani: (01:51)
And I prosecuted over 70 police officers. And I believe that the mayor, the governor and the authorities in Minneapolis have badly mishandled this case. [crosstalk 00:02:01]

Susanna Reid: (02:01)
Okay. And that’s fair enough, and I’m sure that many, many people will agree with you. But my point was about president Trump rather than your view of it. [crosstalk 00:02:11] For instance, shortly after what had happened and then the protests, he had tweeted using a phrase that a bigoted police chief had used decades ago, “When the looting starts, the shooting starts.”

Susanna Reid: (02:24)
Now, many people think that that was a totally inappropriate way [crosstalk 00:02:29] to calm down protest when that’s [crosstalk 00:02:33] almost a threat of violence that even Twitter took action over.

Rudy Giuliani: (02:37)
Of course it wasn’t. That’s part of what you do. That’s part of how you deliberately misinterpret president Trump, because the left-wing media has some kind of a hatred of him. That’s actually [crosstalk 00:02:51]

Susanna Reid: (03:07)
Who said that he didn’t care [crosstalk 00:03:09] about accusations of police brutality. He was a bigoted person himself. Why would president Trump [crosstalk 00:03:15] quote something like that?

Rudy Giuliani: (03:20)
He didn’t quote him. He used that expression, probably not knowing where it came from. The reality is that this became out of control because the mayor of Minneapolis who is a left-wing, progressive Democrat, failed to protect the citizens of his city from riots.

Rudy Giuliani: (03:51)
Please have the courtesy of letting me finish. I’m up here at one o’clock in the morning to answer your questions.

Rudy Giuliani: (03:54)
So I would think you would give me the courtesy of answering.

Rudy Giuliani: (03:57)
I know you don’t like my answers, but I would think you would give me the courtesy of giving them.

Rudy Giuliani: (04:03)
You have a completely warped picture of what happened, which is not atypical.

Rudy Giuliani: (04:10)
I mean, this is constantly what is being done to president Trump by the left-wing media.

Rudy Giuliani: (04:16)
He has handled this really superbly.

Piers Morgan: (04:44)
You keep saying it’s the left-wing media that have somehow misquoted Donald Trump. The president of United [crosstalk 00:04:51]

Piers Morgan: (05:04)
To tweet that [crosstalk 00:05:05] “When the looting starts, the shooting starts”, directly quoting a racist police chief back in the sixties who used dogs and guns on black people.

Rudy Giuliani: (05:29)
Because of the way you demonized him.

Rudy Giuliani: (05:33)
It’s disgusting how you people have become political propaganda, rather than journalists.

Rudy Giuliani: (05:41)
You are political propagandists.

Rudy Giuliani: (05:51)
Well, if you’re trying to sell people that he deliberately quoted some racist, then you are engaging in absolute prying and deception. [crosstalk 00:05:59] please let me finish my answer.

Rudy Giuliani: (06:15)
Because I’ve know him for 30 years and I know he’s a fair man who doesn’t have a racist bone in his body. You know that too. And therefore you’re going through politically correct propaganda, so you can be popular in a [crosstalk 00:06:30]

Piers Morgan: (06:29)
No, I heard the president used the phrase, “When the looting starts…”

Piers Morgan: (06:42)
If you just stop talking for a minute, I’ll tell you what my question is.

Piers Morgan: (06:52)
Well, I see the only person making political propaganda statements is you so far.

Rudy Giuliani: (06:55)
I haven’t made any political propaganda statements.

Piers Morgan: (06:57)
You have. You said the whole thing [crosstalk 00:06:58] is a left-wing myth. Everyone’s got it in for poor old Donald Trump. And I’m telling you that when this thing started, the president’s job was to calm things down. Instead, he said, “When the looting starts, the shooting starts.” And from the moment he said that [crosstalk 00:07:12]

Piers Morgan: (07:12)
From the moment he said that, there’s been total carnage on the streets of America.

Rudy Giuliani: (07:17)
That happens to be an accurate statement.

Rudy Giuliani: (07:25)
Do you know, and did you report that a police officer was killed? Assassinated last night?

Rudy Giuliani: (07:38)
Doesn’t that make your point that when the looting starts, the shooting starts? I don’t care who said that.

Rudy Giuliani: (07:45)
I have prevented numerous riots in my career. That is an accurate statement.

Rudy Giuliani: (07:51)
Accurate warning that if you continue to loot, you are going to bring about violence.

Rudy Giuliani: (08:03)
They killed a man yesterday. The president was warning them, if you loot, you are going to provoke violence. He may have picked a quote that comes 30 years ago from some nutty, horrible racist, but that is not what he did on purpose. That’s what you attributed to him because they are prejudice against him, and because what [crosstalk 00:08:23]

Rudy Giuliani: (08:46)
And you’re not allowing me to explain it, because I have to talk over you.

Rudy Giuliani: (08:53)
You’re lying to them [crosstalk 00:08:57] and you’re misleading them. That was not deliberately taken from a racist. That is an accurate statement. When people begin looting, they provoke violence. The proof is the people who have been killed here by the rioters, not by the police. And by the way, there were only nine people, nine black people, unarmed that were killed by the police last year in America. There were hundreds of times more than that. Black people killed by other black people that the police have to prevent, including black police officers, like Captain Dorn, who was slaughtered last night, and it was ignored by the left-wing media.

Piers Morgan: (10:00)
If you let me finish, I would say that the deaths of anybody in these protests and some of the rioting that’s going on is completely unacceptable. I don’t care if you’re left, right, whatever you are, whatever political persuasion. It is [crosstalk 00:10:14]

Rudy Giuliani: (10:28)
It is not. I’ve never even heard it before. I’ve been in law enforcement for 20 years, Piers. I wouldn’t have known where that came from. What a bunch of garbage.

Rudy Giuliani: (10:39)
It happens to be factually correct. No matter who it came from. If you start looting, people are going to start shooting.

Rudy Giuliani: (10:47)
They’re going to kill people, and they have killed people and you don’t cover it.

Rudy Giuliani: (10:59)
You are professionally unethical.

Rudy Giuliani: (11:07)
Watching how much you people lie, and distort.

Piers Morgan: (11:13)
You know what, Rudy? You used to be one of the most respected and revered people in America, if not the world. You were someone we looked up to.

Rudy Giuliani: (11:19)
Oh, who wants to listen to you, Piers. I mean, really. You can say anything you want, because I have no respect for you the way you’re covering this, and this nonsense about the fact that a man you know, and you know he’s not a racist, that he went and borrowed that deliberately from a guy who said it 30 years ago.

Piers Morgan: (11:58)
I quoted him from his own tweet. What are you talking about?

Piers Morgan: (12:13)
I don’t care if he knew it or not. Why the hell was he using such inflammatory language?

Rudy Giuliani: (12:25)
And it actually happened. People have been killed by the looters, including an innocent man last night, who was guarding his friends store, who was African American and his life matters too, but not to you.

Rudy Giuliani: (12:41)
Because it doesn’t fit your narrative. You didn’t even report on that man being killed.

Rudy Giuliani: (12:46)
Because you don’t care about him, because it doesn’t fit your false narrative.

Rudy Giuliani: (12:56)
And you people are in favor of a phony political narrative.

Rudy Giuliani: (13:02)
You’re a disgrace, and the interview is over as far as I’m concerned.

Piers Morgan: (13:03)
You sound completely barking mad. Do you know that?