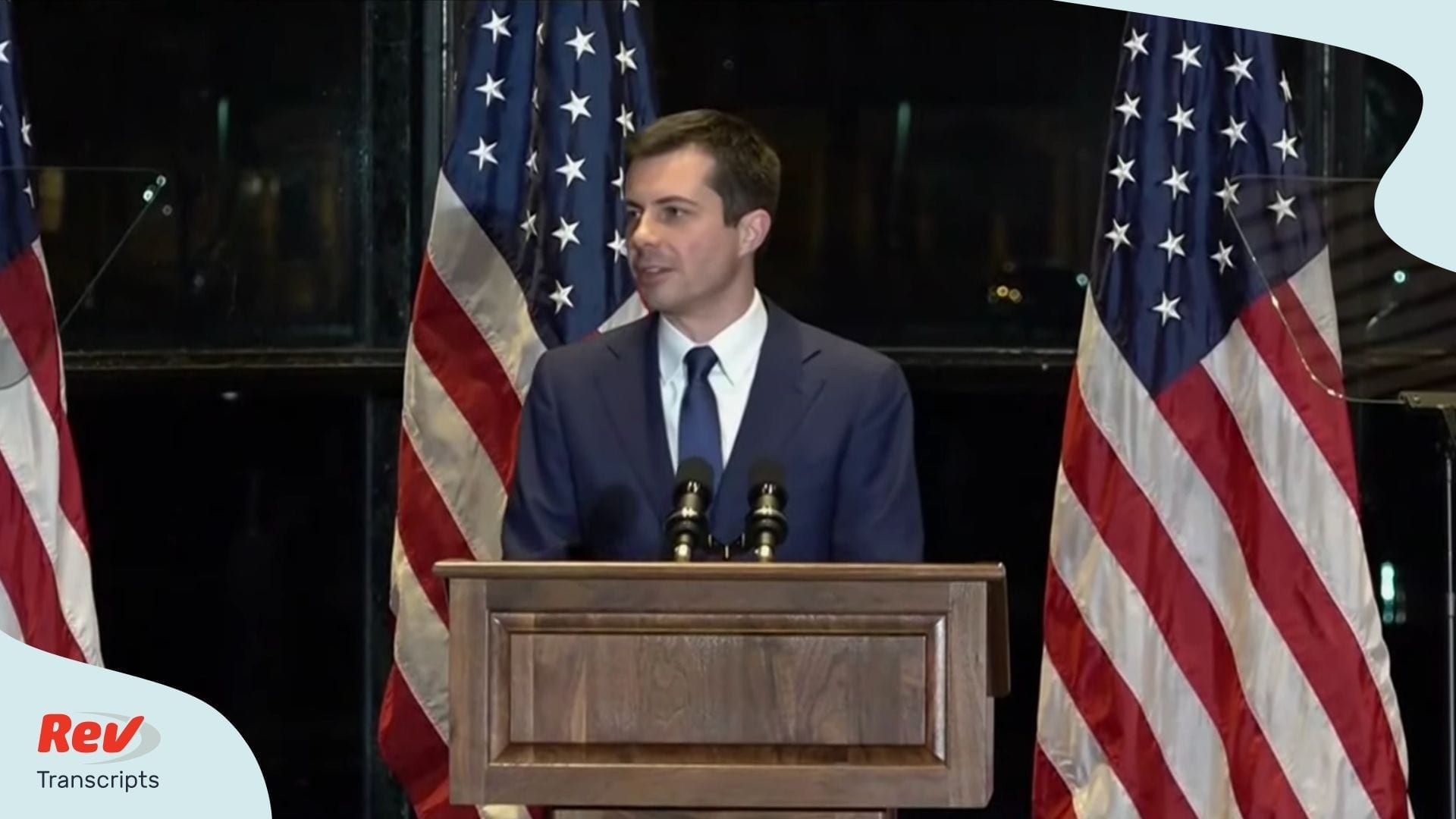 Pete Buttigieg spoke in South Bend, Indiana following an announcement that he will be ending his 2020 Democratic campaign for president. Read the full transcript of his speech right here.

Pete Buttigieg: (00:00)
It’s so good to be in South Bend. Sometimes the longest way around really is the shortest way home. Here we are. In the last few years, America has faced enormous challenges from an economy in transition, to a climate on the brink, to a President sewing chaos and discord across the very country he is responsible for uniting. And for many Americans, these challenges have amounted to a call to action. And so like so many others, I thought deeply about what I could do to make a difference, what I could do to make myself useful.

Pete Buttigieg: (00:47)
And it was in that spirit, with your help, that a year ago we launched our campaign for the American Presidency. We began this unlikely journey with a staff of four in a cramped office right here in South Bend, Indiana, right down Washington Street. No big email list. No personal fortune. Hardly anybody knew my name and even fewer could pronounce it, but South Bend showed everybody what to do. First name Mayor, last name Pete, so nobody got confused.

Pete Buttigieg: (01:38)
But by every conventional wisdom, by every historical measure, we were never supposed to get anywhere at all. And then, as I said, that roller coaster February night a few weeks ago, when Iowa shocked the nation, along that way, an improbable hope became an undeniable reality.

Pete Buttigieg: (02:04)
In a field in which more than two dozen Democratic candidates ran for President, senators and governors, billionaires, a former Vice President, we achieved a top four finish in each of the first four States to hold nominating contests, and we made history winning those Iowa caucuses.

Pete Buttigieg: (02:23)
And all of that, it came about thanks to your support. Thanks to the power of this campaign’s vision in your hands. It proved that Americans really are hungry for a new kind of politics, rooted in the values that we share. In cities and suburbs, in rural communities, in crowds that spilled out of venues from Salt Lake City, to Raleigh, to Arlington, we saw Americans ready to meet a new era of challenge with a new generation of leadership. We found countless Americans ready to support a middle-class millennial mayor from the industrial Midwest, not in spite of that experience, but because of it, eager to get Washington to start working like our best run communities and towns.

Pete Buttigieg: (03:21)
In a divided nation, we saw fellow Democrats join with Independents and, yes, some of those future former Republicans to choose a different politics, to choose a politics defined not by who we push away, but by how many we can call to our side.

Pete Buttigieg: (03:38)
And we sent a message to every kid out there wondering if whatever marks them out as different means they are somehow destined to be less than, to see that someone who once felt that exact same way can become a leading American Presidential candidate with his husband at his side.

Pete Buttigieg: (04:17)
We got into this race for a reason. We got into this race in order to defeat the current President and in order to usher in a new kind of politics. And that meant guiding our campaign by the values we like to call the rules of the road. Respect, belonging, truth, teamwork, boldness, responsibility, substance, discipline, excellence, and joy. And every decision we made was guided by these values.

Pete Buttigieg: (04:56)
One of those values is truth. And today is a moment of truth. After a year of going everywhere, meeting everyone, defying every expectation, seeking every vote, the truth is that the path has narrowed to a close for our candidacy, if not for our cause.

Pete Buttigieg: (05:13)
And another of those values is responsibility. And we have a responsibility to consider the effect of remaining in this race any further. Our goal has always been to help unify Americans to defeat Donald Trump and to win the era for our values. And so we must recognize that at this point in the race, the best way to keep faith with those goals and ideals is to step aside and help bring our party and our country together.

Pete Buttigieg: (05:55)
So tonight I am making the difficult decision to suspend my campaign for the Presidency. I will no longer seek to be the 2020 Democratic nominee for President, but I will do everything in my power to ensure that we have a new Democratic President come January.

Pete Buttigieg: (06:39)
We have to because every time this President brings partisan politics into the management of a deadly serious pandemic, or purges officials who honored their oaths of office by telling the truth, or cloaks in religious language an administration whose actions harm the least among us, the sick and the poor, the outcast and the stranger, we are reminded just how urgent it is that we change who is in the White House. We cannot afford to miss this moment.

Pete Buttigieg: (07:15)
With every passing day, I am more and more convinced that the only way we will defeat Trump and Trumpism is with a new politics that gathers people together. We need leadership to heal a divided nation, not drive us further apart. We need a broad based agenda that can truly deliver for the American people, not one that gets lost in ideology. We need an approach strong enough not only to win the White House, but to hold the House, win the Senate, and send Mitch McConnell into retirement.

Pete Buttigieg: (07:44)
And that broad and inclusive politics, that is the politics that we’ve attempted to model through this campaign that I believe is the way forward for our eventual nominee. So I urge everyone who supported me to continue in the cause of ensuring that we bring change to the White House and working to win the absolutely critical down ballot races playing out across the country this year.

Pete Buttigieg: (08:27)
There is simply too much at stake to retreat to the sidelines at a time like this. As this contest gives way to the season of weekly elections and delegate math. It is more important than ever that we hold to what this is actually all about. Politics is not about the horse race, not about the debate stage, or a precinct count in a spreadsheet. It is about real people’s lives. It is about our paychecks, our families, our futures. We can and must put the everyday lives of Americans who have been overlooked for so long back at the center of our politics and every story that became part of this campaign helped show us why and how we do just that.

Pete Buttigieg: (09:19)
Politics is about people and that is especially true of the people who touched this campaign. To my competitors in a historically diverse field, those who have stepped aside and those still competing, thank you for demonstrating what public service can be.

Pete Buttigieg: (10:15)
You walked in neighborhoods on hot summer days and drove on icy roads in the winter time, you filmed and tweeted and coded and crunched numbers. You built relationships and you built events. You lit up offices and you filled high school gyms with equipment and then with people and then with cheers, in the name of our values, freedom and security and democracy.

Pete Buttigieg: (10:47)
Our contributors, so many of you dug deep to fuel this campaign. Nearly a million grassroots supporters who sacrificed financially so that this message of hope and belonging could reach every corner of this country. Thank you for what you gave to make this possible.

Pete Buttigieg: (11:13)
Online, in person, with family and with friends and with total strangers, you shared your personal stories and you made the life of this campaign part of your own. What you did and the way you did it was how we could show, not just tell, the kind of campaign we could be and the kind of country we will build. You made me proud every single day.

Pete Buttigieg: (11:35)
And last, I want to thank my own family. My mom, who not only helped raise me but put her love of language into work answering letters for the campaign. My father, who left us just as this was all getting underway, but he was very much here and part of this effort. And to the guy who took a chance on a first date with somebody all the way in South Bend, Indiana and never looked back. Chasten, I can’t wait to spend the rest of my life with you.

Pete Buttigieg: (12:41)
I know that as this campaign ends, there comes disappointment that we won’t continue, but I hope that everyone who has been part of this in any way knows that the campaign that you have built and the community that you have created is only the beginning of the change that we are going to make together.

Pete Buttigieg: (13:07)
My faith teaches that the world is not divided into good people and bad people, that all of us are capable of good and bad things. Today, more than ever, politics matters because leaders can call out either what is best in us or what is worst in us, can draw us either to our better or to our worst selves. Politics at its worst as ugly, but at its best politics can lift us up. It is not just policy making, it is moral. It is soul craft. That is why we were in this.

Pete Buttigieg: (13:47)
Earlier today, we were in Selma marching in commemoration of the Civil Rights Movement on the Edmund Pettus Bridge, where I was humbled to walk in the symbolic and the literal shadows of heroes who 55 years ago made America more of a democracy than it had ever been by their blood and by their courage. And seeing those moral giants made me ask what we might achieve in the years now at hand, how we might live up to the greatest moral traditions of political change in this country. It made me wonder how the 2020s will be remembered when I am an old man.

Pete Buttigieg: (14:25)
I firmly believe that in these years, in our time, we can and will make American life and politics more like what it could be, not just more wise and more prosperous, but more equitable, and more just, and more decent.

Pete Buttigieg: (14:48)
Think of how proud of our time we could be if we really did act to make it so that no one has to take to the streets in America for a decent wage because one job is enough in the United States of America, whether you went to college or not.

Pete Buttigieg: (15:07)
Imagine how proud we would be to be the generation that saw the day when your race has no bearing on your health, or your wealth, or your relationship with law enforcement in the United States.

Pete Buttigieg: (15:34)
What if we were the ones who rallied this nation to see to it that climate would be no barrier to our children’s opportunities in life.

Pete Buttigieg: (15:43)
The chance to do that is in our hands. That is the hope in our hearts. That is the fire in our bellies. That is the future we believe in. A country that really does empower every American to thrive and a future where everyone belongs.