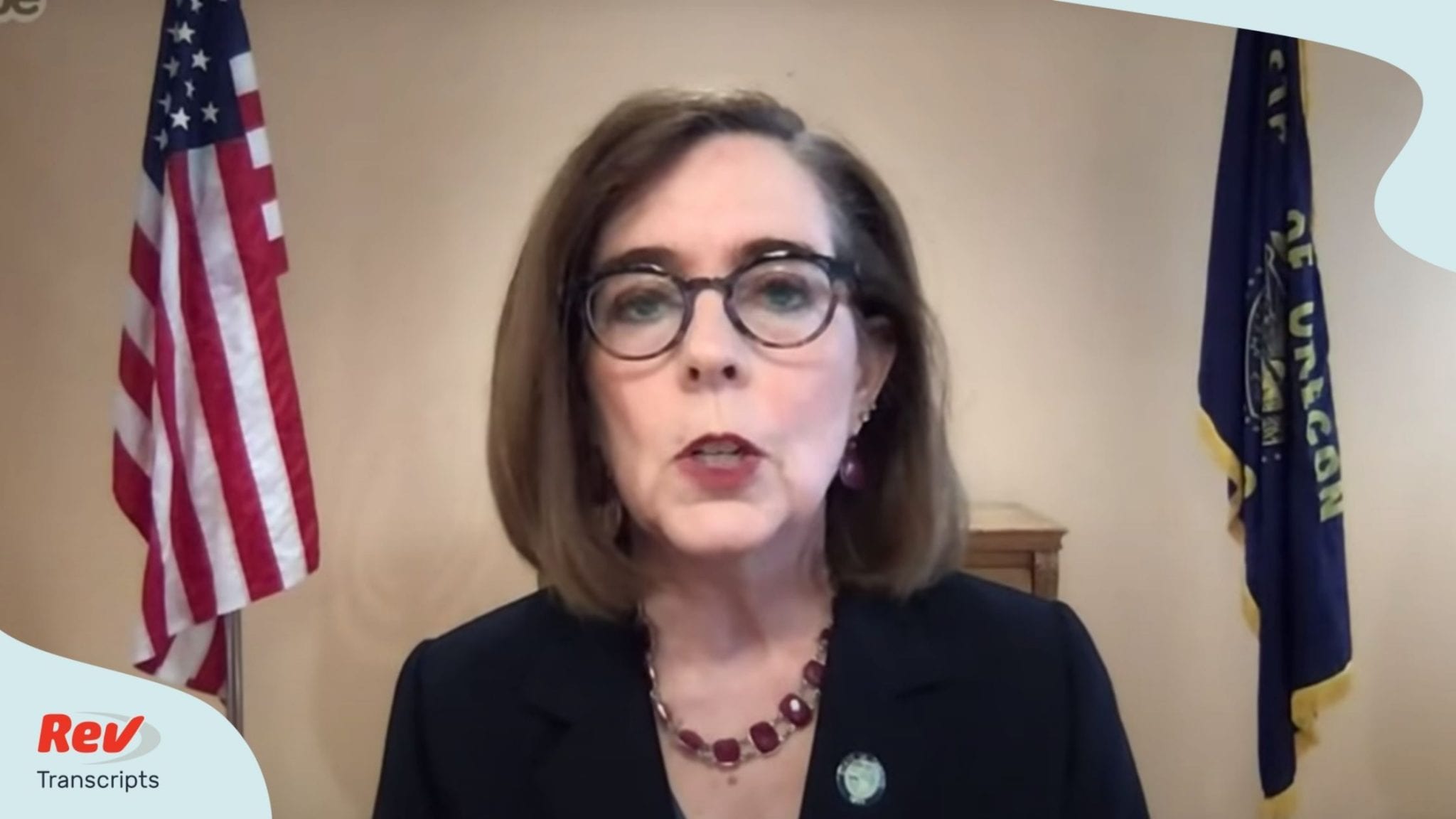 Oregon Governor Kate Brown spoke about federal forces in Portland on July 20 on PBS. She said: “Things were beginning to calm down, then Trump’s troops arrived and it’s simply like pouring gasoline on a fire”. Read the transcript of her interview here.

Speaker 1: (00:00)
Responding to that report today, Chicago mayor Lori Lightfoot said her city does not need federal agents without insignias taking people off the streets. We’re joined now by Kate Brown. She is the governor of Oregon. She is joining us from Portland. Governor Brown, thanks so much for being with us. You heard President Trump in that tapped spot saying that the reason the federal forces are in Portland are to restore order. Late this afternoon, DHS, the Department of Homeland Security tweeted out that Portland is rife with violent anarchists assaulting federal officers and federal buildings. What’s your response?

Kate Brown: (00:41)
Well, unfortunately things were calming down when Trump’s troops appeared on our streets. I was really clear when I spoke with the Secretary of Homeland Security last week. I asked them to leave and that their presence here was not needed. The challenge is, their presence here is escalating an already challenging situation. Things were beginning to calm down, then Trump’s troops arrived and it’s simply like pouring gasoline on a fire.

Speaker 1: (01:13)
Have you had anymore conversations with Secretary Wolf since then?

Kate Brown: (01:17)
No, I haven’t. The harsh reality is this is about scoring political points with their base. This is about political theater. If they were really interested in problem solving, or in public safety, they would be willing to deescalate and engage in dialog. Instead, they bring more troops to the streets, they take peaceful protestors off into unmarked cars, and unfortunately, last weekend, they almost killed a peaceful protestor. This is absolutely outrageous. It is a violation of the principles on which this country was founded.

Speaker 1: (01:56)
We should note, almost killed a peaceful protestor, a protestor was hit by a non-lethal projectile fired by someone from the … I believe was the Marshall Service. The US Attorney has referred that to DHS, Inspector General for investigation. I mean, we’ve heard DHS talk about the assaults and the attacks on the federal building, but the Federal Protective Service, which is part of DHS does have the authority, the responsibility, of protecting the federal building where all this is going on. How can you argue that you don’t want them in the city?

Kate Brown: (02:36)
Look, there’s no question about their legal authority to protect public buildings, but this is substantially more than that. If you were interested in resolving a crisis, wouldn’t you call the elected leaders involved? Wouldn’t you see how you could help? The irony of this entire situation is that we do need help. Like all states, Oregon is substantially in need of financial assistance. We need help with testing supplies and equipment. This is a challenge. The Trump troops here in Portland are exacerbating an already challenging situation on the streets. Look, this is distraction for the Trump administration. They are wanting to distract from the challenging job they have done, the failure to lead this country through a national pandemic. There is no national response and there is no leadership out of the Trump administration.

Speaker 1: (03:40)
You talk about if they were interested in try to resolve this problem, they’d talk to the local and state officials, usually in these situations there is coordination between federal, state, and local officials, has that been the case in this instance?

Kate Brown: (03:53)
Absolutely not. Both the mayor and myself in speaking with the Secretary of Homeland Security said we do not want you here, please leave. They came in without talking to us. Now they are staying without our permission. I have to say, elected officials at the local level, at the state level, and at the federal level, we are all united against the presence of these Trump troops here on the streets of Portland. Last night we had hundreds of mothers from [inaudible 00:04:26] the city putting their bodies, putting their lives between protestors and federal officers. This is a very serious situation. The federal troops need to pack up and go home and let us manage the situation.

Speaker 1: (04:45)
Have you been hearing from any of your colleagues, any governors from other states worried about what might happen in their states?

Kate Brown: (04:52)
Yes. I spoke to two governors yesterday. Folks are extremely concerned. A couple of weeks ago on a call with the White House, the president said, “We needed to be dominating the streets. We needed to have a our National Guard, our military out patrolling the streets.” That’s not how we do things here. But governors from around the country are concerned, particularly democratic governors, that the president will bring troops in and increase the level on tension and increase the level of violence.

Kate Brown: (05:28)
Look, the violence is absolutely unacceptable, there’s no question about that. The violence is a distraction from the incredibly important work that we need to do to eradicate racism in our criminal justice system, in our healthcare system, and of course in our education system. But the Trump administration is not interested in problem solving. The Trump administration is not interested in public safety, they are interested in political theater and scoring points with their base.