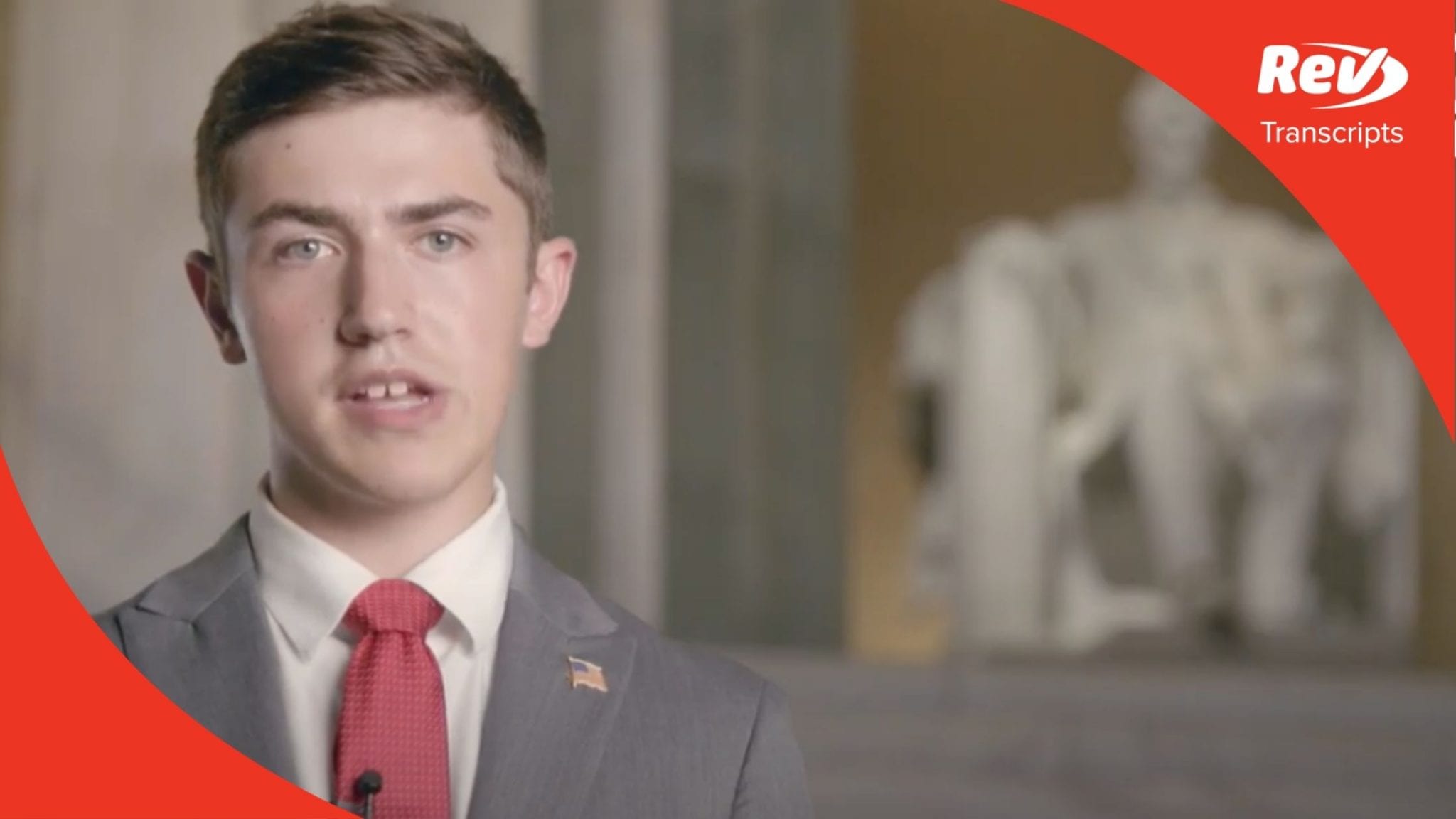 Speaker 1: (00:00)
On a class trip to join thousands for the annual March for Life. These Catholic young men traveled from Kentucky to stand up for what they believed in, but what happened was something very different.

Speaker 1: (00:33)
Social media, the news, and even celebrities launched a campaign of persecution that was completely false against a boy in a Make America Great Again hat.

Speaker 4: (00:33)
The MAGA hat carries a certain connotation that provokes a conditioned reaction.

Speaker 6: (00:42)
Everyone that sees that smug look wants to punch that kid.

Nicholas Sandmann: (00:55)
Good evening, everyone. My name is Nick Sandman and I’m the teenager who was defamed by the media after an encounter with a group of protesters on the steps of the Lincoln Memorial last year. Before I begin, I’d like to thank President Trump for the opportunity to share some of my story and why it matters so much to this November’s election.

Nicholas Sandmann: (01:16)
In 2019, I attended the March for Life in Washington, D.C., where I demonstrated in defense of the unborn. Later that day, I bought a Make America Great Again hat because our President, Donald Trump, has distinguished himself as one of the most pro-life presidents in the history of our country, and I wanted to express my support for him, too. Looking back now, how could I had possibly imagined that the simple act of putting on that red hat would unleash hate from the left and make myself the target of network and cable news networks nationwide.

Nicholas Sandmann: (01:54)
Being from Kentucky, the birthplace of Abraham Lincoln, my classmates and I visited the Lincoln Memorial. I found myself face to face with Nathan Phillips and other professional protestors, looking to turn me into the latest poster child showing why Trump is bad, while the media portrayed me as an aggressor with a relentless smirk on my face. In reality, the video confirms I was standing with my hands behind my back and an awkward smile on my face that had two thoughts. One, don’t do anything that might further agitate the man banging a drum in my face. And two, I was trying to follow a family friend’s advice, never to do anything to embarrass your family, your school, or your community.

Nicholas Sandmann: (02:43)
Before I knew what was happening, it was over. One of Mr. Phillips fellow agitators yelled out, “We got him. It’s all right here on video. And we won, Grandpa.” What I thought was a strange encounter, quickly developed into a major news story complete with video footage.

Nicholas Sandmann: (03:03)
My life changed forever in that one moment. The full war machine of the mainstream media revved up into attack mode. They did so without researching the full video of the incident, without ever investigating Mr. Phillips’ motives, or without ever asking me for my side of the story. And do you know why? Because the truth was not important. Advancing their anti-Christian, anti-conservative, anti-Donald Trump narrative was all that mattered. And if advancing their narrative ruined the reputation and future of a teenager from Covington, Kentucky, well, so be it. That would teach him not to wear a MAGA hat.

Nicholas Sandmann: (03:44)
I learned what was happening to me had a name. It was called being canceled, as in annulled, as in revoked, as in made void. Canceled is what’s happening to people around this country who refuse to be silenced by the far left. Many are being fired, humiliated, or even threatened. And often the media is a willing participant. But I would not be canceled. I fought back hard to expose the media for what they did to me and I won a personal victory.

Nicholas Sandmann: (04:19)
While much more must be done, I look forward to the day that the media returns to providing balanced, responsible and accountable news coverage. I know President Trump hopes for that too. And I know you’ll agree with me when we say that no one in this country has been a victim of unfair media coverage more than President Donald Trump.

Nicholas Sandmann: (04:40)
In November, I believe this country must unite around a President who calls the media out and refuses to allow them to create a narrative instead of reporting the facts. I believe we must join a President who will challenge the media to return to objective journalism, and together, I believe we must all embrace our first amendment rights, and not hide in fear of the media or from the tech companies or from the outrage mob, either. This is worth fighting for. This is worth voting for. And this is what Donald Trump stands for. Thank you all for listening to me tonight. And one more thing, let’s make America great again.