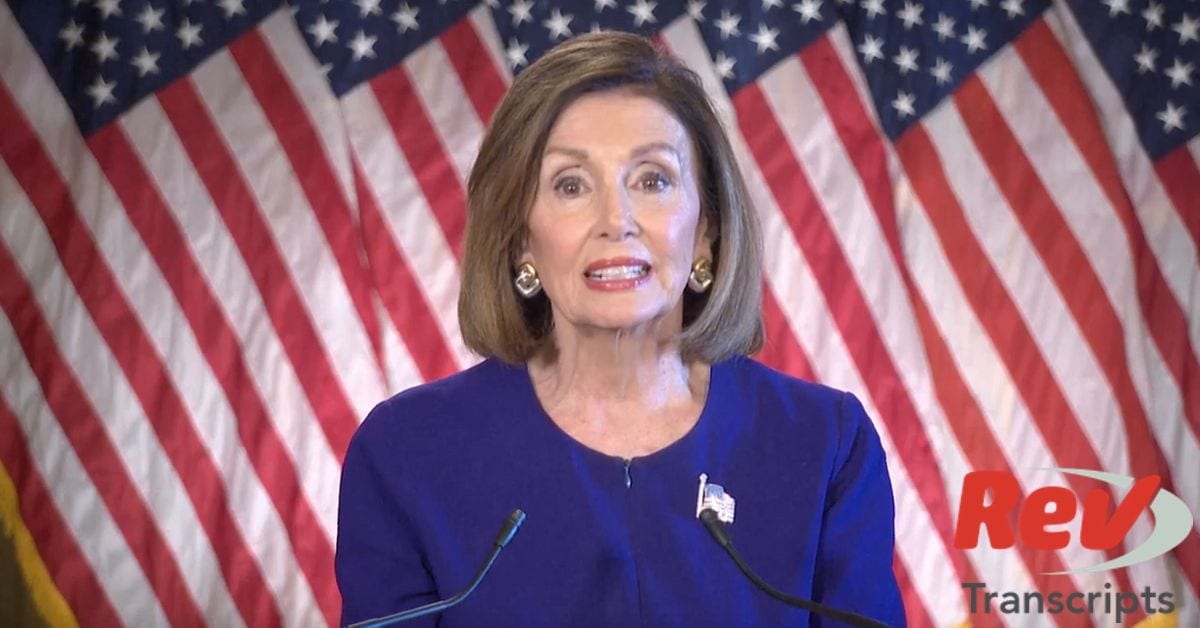 On September 24, 2019 Nancy Pelosi announced that the House of Representatives would be launching an impeachment inquiry regarding President Donald Trump regarding his conversations with the Ukraine about investigating a political rival, Joe Biden. This came to light via a whistleblower who had an issue with the call between the Ukrainian president and Donald Trump. Read the full transcript of Nancy Pelosi’s announcement below.

Good afternoon. Last Tuesday, we observed the anniversary of the adoption of the constitution on September 17th. Sadly on that day, the intelligence community Inspector General formally notified the Congress that the administration was forbidding him from turning over a whistleblower complaint on constitution day. This is a violation of the law. Shortly thereafter, press reports began to break of a phone call by the president of the United States calling upon a foreign power to intervene in his election. This is a breach of his constitutional responsibilities.

The facts are these, the intelligence community Inspector General, who was appointed by President Trump determined that the complaint is both of urgent concern and credible. And it’s disclosure, he went on to say, relates to one of the most significant, important of the Director of National Intelligence’s responsibility to the American people. On Thursday, the Inspector General testified before the House Intelligence Committee stating that the acting Director of National Intelligence blocked him from disclosing the whistleblower complaint. This is a violation of law.

The law is unequivocal. It says the DNI, D-N-I Director of National Intelligence, shall provide Congress the full whistleblower complaint. For more than 25 years, I’ve served on the Intelligence Committee as a member, as the ranking member, as part of the Gang of Four even before I was in the leadership.

I was there when we created the Office of the Director of National Intelligence. That did not exist before 2004. I was there even earlier in the ’90s when we wrote the whistleblower laws and continued to write them to improve them, to ensure the security of our intelligence and the safety of our whistleblowers. I know what their purpose was and we proceeded with balance and caution as we wrote the laws. I can say with authority, the Trump administration’s actions undermine both our national security and our intelligence and our protections of the whistleblowers. More than both.

This Thursday, the acting DNI will appear before the house intelligence committee. At that time, he must turn over the whistleblower’s full complaint to the committee. He will have to choose whether to break the law or honor his responsibility to the constitution.

On the final day of the Constitutional Convention in 1787 when our constitution was adopted, Americans gathered on the steps of Independence Hall to await the news of the government our founders had crafted. They asked Benjamin Franklin, “What do we have a republic or monarchy?” Franklin replied, “A republic if you can keep it.” Our responsibility is to keep it.

Our republic endures because of the wisdom of our constitution enshrined in three co-equal branches of government serving as checks and balances on each other. The actions taken to date by the President have seriously violated the constitution, especially when the President says, “Article two says I can do whatever I want.”

For the past several months, we have been investigating in our committees and litigating in the courts so the House can gather all the relevant facts and consider whether to exercise its full article one powers, including a constitutional power of the utmost gravity approval of articles of impeachment. And this week, the President has admitted to asking the president of Ukraine to take actions which would benefit him politically. The actions of the Trump presidency revealed dishonorable fact of the President’s betrayal of his oath of office, betrayal of our national security, and betrayal of the integrity of our elections.

Therefore today, I’m announcing the House of Representatives moving forward with an official impeachment inquiry. I’m directing our six committees to proceed with their investigations under that umbrella of impeachment inquiry. The President must be held accountable. No one is above the law.

Getting back to our founders, in the darkest stays at the American revolution, Thomas Payne wrote, “The times have found us.” The times found them to fight for and establish our democracy. The times have found us today, not to place ourselves in the same category of greatness as our founders but to places in the urgency of protecting and defending our constitution from all enemies, foreign and domestic. In the words of Ben Franklin, to keep our republic.

I thank our chairmen, Chairman Nadler, Chairman Schiff. Chairman Nadler of Judiciary, Chairman Schiff of Intelligence, Chairman Engel of Foreign Affairs, Chairman Cummings of Oversight. And Chairman Cummings I’ve been in touch with constantly. He’s the master of so much but including inspectors general and whistleblowers. Congresswoman Richie Neal of the Ways and Means committee, Congresswoman Maxine Waters of the Foreign Financial Services committee. And I commend all of our our members, our colleagues for their thoughtful, thoughtful approach to all of this, for their careful statements. God bless them, and God bless America. Thank you all.

Madame Speaker, never before has president been convicted by the Senate. What does this accomplish if the Senate doesn’t convict?