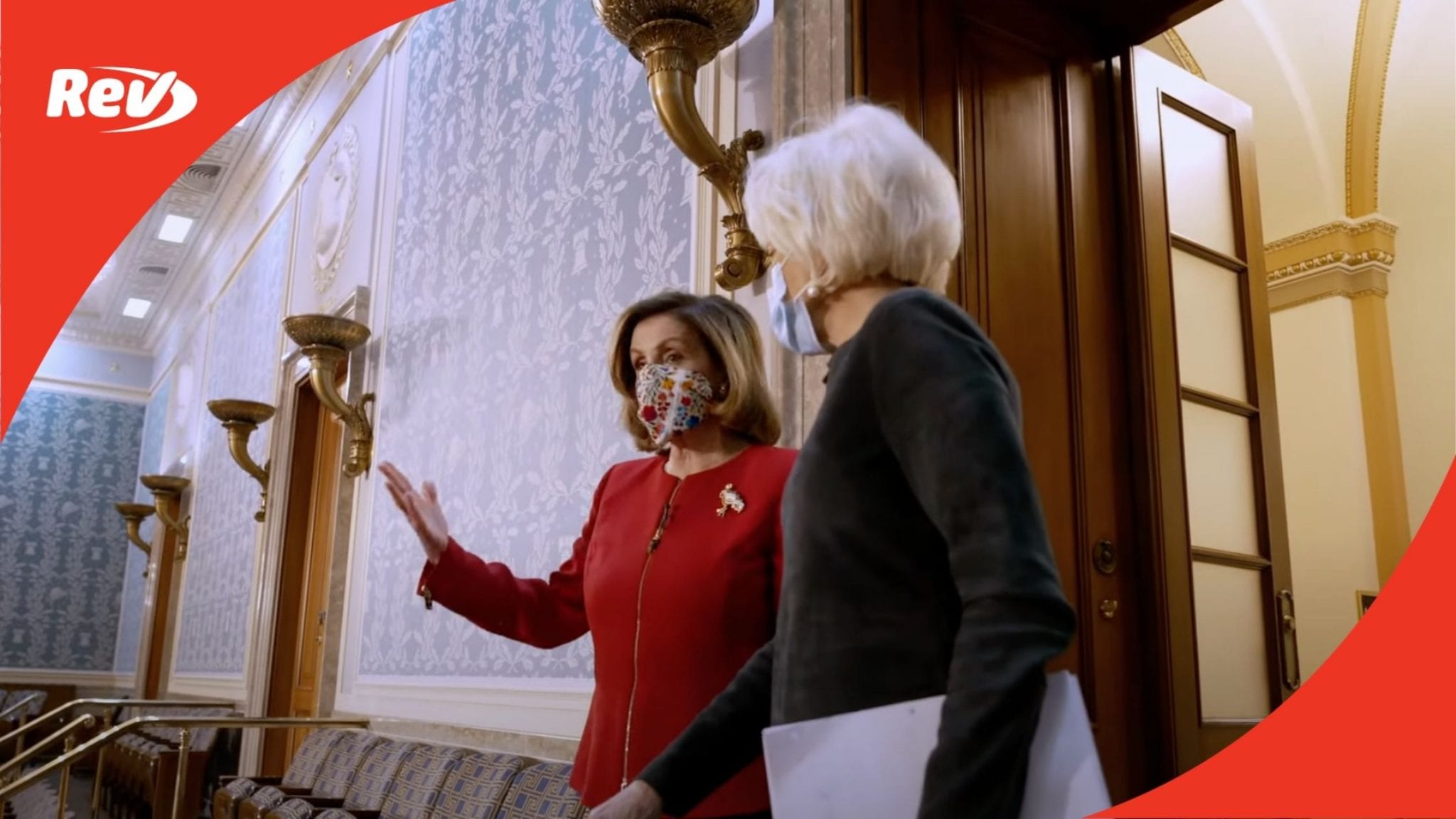 Speaker of the House Nancy Pelosi gave an interview with 60 Minutes, a few days after Trump protestors broke into the Capitol building. She explained the events that happened that day. Read the transcript here.

Nancy Pelosi: (01:13)
Well, sadly, the person who’s running the executive branch is a deranged, unhinged, dangerous president of the United States, and only a number of days until we can be protected from him. But he has done something so serious that there should be prosecution against him.

Lesley Stahl: (01:44)
The mayhem at the Capitol started early afternoon on January 6th, with the rioters barreling past the barricades, clashing with police, and breaking into the Capitol. As they swarmed through the halls, the Speaker was on the House floor during the count of the electoral college vote.

Lesley Stahl: (02:07)
So tell us what happened when the protestors were trying to get in here. You’re up there.

Nancy Pelosi: (02:17)
Well, when the protesters who were making the assault on the Capitol, before they even got to these doors, the Capitol Police pulled me from the podium. And I was concerned because I said, “No, I want to be here,” and they said, “Well, no. You have to leave.” I said, “No, I’m not leaving this.” “No, you must leave.”

Lesley Stahl: (02:35)
Police, guns drawn, held the invaders off the House floor. But over in the Senate, the Trump supporters were able to break into the chamber. The scenes were shocking to watch.

Nancy Pelosi: (02:48)
I think it was universally accepted that what happened was a terrible, terrible violation of the Capitol, of the first branch of government, the legislative branch, by the president of the United States.

Lesley Stahl: (03:14)
The mob was free to roam the halls, one group making it right up to Speaker Pelosi’s suite of offices.

Lesley Stahl: (03:30)
And went through to another door, behind which Pelosi’s young staff coward, terrorized.

Nancy Pelosi: (03:37)
The staff went under the table, barricaded the door, turned out the lights and were silent in the dark.

Lesley Stahl: (03:49)
Wow. During which time they listened to the invaders banging on that door, as you can hear on a recording from one of the staffer’s phones.

Lesley Stahl: (04:05)
Across the hall, a group broke in to the Speaker’s private office.

Nancy Pelosi: (04:13)
You see what they did to the mirror there? The glass was all over the place.

Nancy Pelosi: (04:18)
They took a computer and all that stuff, a laptop. And then the desk that they actually were at was right there that they defamed in that way, feet on the desk and all that.

Lesley Stahl: (04:32)
That man was arrested on Friday, and the FBI is investigating whether any of the agitators, some seen in ballistic vests with zip ties, intended to kidnap or kill legislators or their staffers.

Nancy Pelosi: (04:53)
The evidence is now that it was a well-planned, organized group with leadership and guidance and direction, and the direction was to go get people.

Nancy Pelosi: (05:05)
They were vocally saying, “Where’s the speaker? We know she has staff. They’re here someplace. We’re going to find them.”

Lesley Stahl: (05:13)
While all of this was going on, Speaker Pelosi and Senator Schumer, from an undisclosed location, called on the president to tell his followers to leave the Capitol.

Donald Trump: (05:24)
It was a landslide election, and everyone knows it, especially the other side, but you have to go home now. We have to have peace.

Nancy Pelosi: (05:33)
The president said, “Go home, but the election was …” Went on with his lies, his misrepresentations, his delusion that he won in a landslide in this election.

Lesley Stahl: (05:44)
So finally the protesters were ejected, and you came almost right back into session. How did that happen?

Nancy Pelosi: (05:53)
I know from Chuck Schumer and from Mitch McConnell there was consensus that we should come back.

Nancy Pelosi: (06:00)
There was some suggestions that it may take too long and we should do it at the undisclosed location, but there was general belief that from the message of strength that we needed to send, we had to go back to the Capitol as soon as possible.

Lesley Stahl: (06:15)
Vice President Pence, who had been taken to a secure location in the Capitol, concurred with the decision to resume the count amid reports that he was livid at the president.

Nancy Pelosi: (06:39)
After the violence. Shame on them, and shame on two-thirds of the Republican caucus in the House supporting those. So these people are enablers of the president’s behavior. I remember when Republicans in the Senate went to see Richard Nixon and said, “It’s over.” That’s what has to happen now.

Lesley Stahl: (06:58)
One of the reasons she’s so eager to see Mr. Trump’s immediate removal from office is her grave concern that in the next 10 days he might try to do something reckless militarily, including ordering the use of nuclear weapons. She told us she sought advice from General Mark Milley, Chairman of the Joint Chiefs.

Nancy Pelosi: (07:19)
I have sought information from those who are in a position to know that there are protections against this dangerous president initiating any military hostilities or something worse than that.

Lesley Stahl: (07:34)
Something else she and Senator Schumer did was call the vice president to urge him to initiate the 25th Amendment that provides procedures to remove a president from office.

Nancy Pelosi: (07:53)
At least. Of course, I was at home so I was running the dishwasher, putting my clothes in the laundry. We’re still waiting for him to return the call.

Lesley Stahl: (08:14)
After Congress confirmed Joe Biden’s victory in the election, President Trump read from a teleprompter offering his most conciliatory statement about the election.

Donald Trump: (08:25)
A new administration will be inaugurated on January 20th. My focus now turns to ensuring a smooth, orderly, and seamless transition of power.

Lesley Stahl: (08:34)
Mr. Trump has said he will not attend the inauguration. The new president has said he wants to turn over a new page of bipartisan cooperation.

Lesley Stahl: (08:46)
In the election in November, someone said that the mandate that the Democrats won was not about issues because you lost so many seats; that the mandate was for tone and attitude and a strong desire for compromise.

Lesley Stahl: (09:30)
You yourself are not known as a person who compromises.

Nancy Pelosi: (09:36)
No, I am. I compromise. We want to get the job done. I’m mis-characterized by the Republicans that way, but that’s a tactic that they use, but we know we want results for the American people.

Lesley Stahl: (09:48)
What about the COVID relief package that was held up for eight months?

Nancy Pelosi: (09:53)
No. But that was their obstruction. Understand this.

Lesley Stahl: (10:24)
There’s a member of your caucus who said specifically that, “We look like obstructionists, and it was a mistake.”

Nancy Pelosi: (10:31)
Well, I don’t remember anybody saying that, and they may have. And they may have, but it wasn’t a mistake, and I would not, and nobody expects me to, to support something that solidifies injustice in our country.

Lesley Stahl: (10:46)
Let’s talk about the Russian hack. There was an invasion, a cyber invasion.

Lesley Stahl: (10:53)
Big deal. What should the United States do about that?

Nancy Pelosi: (10:57)
In terms of the hack that the president would not assert his authority … First of all …

Nancy Pelosi: (11:24)
But there’s no other explaining why this president of the United States is such a handmaiden of Putin.

Lesley Stahl: (11:53)
Why does AOC complain that you have not been grooming younger people?

Nancy Pelosi: (12:07)
I’m not dismissing her. I respect her. I think she’s very effective, as are many other members in our caucus that the press doesn’t pay attention to, but they are there, and they are building support for what comes next.

Lesley Stahl: (12:21)
The Speaker intends to keep the pressure on President Trump to leave office as soon as possible. If he does not resign immediately, she has threatened to initiate impeachment proceedings.

Nancy Pelosi: (12:38)
What if he pardons these people who are terrorists on the Capitol?

Lesley Stahl: (12:53)
There is a possibility that after all of this, there’s no punishment, no consequence, and he could run again for president.

Nancy Pelosi: (13:02)
And that’s one of the motivations that people have for advocating for impeachment.

Nancy Pelosi: (13:10)
Well, I like the 25th Amendment because it gets rid of him. He’s out of office. But there is strong support in the Congress for impeaching the president a second time. This president is guilty of inciting insurrection. He has to pay a price for that.