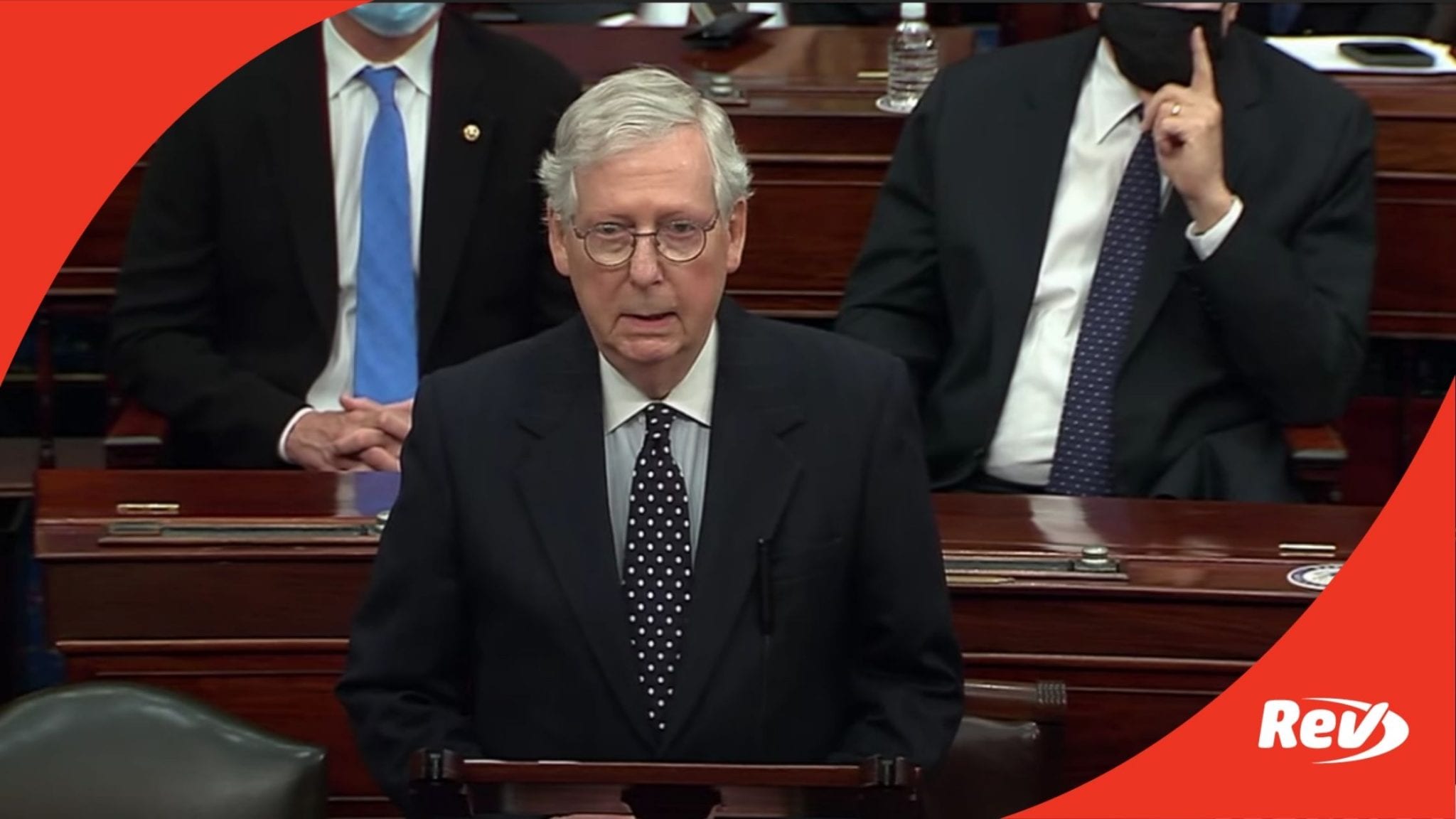 Senator Mitch McConnell: (00:00)
We’re debating a step that has never been taken in American history. Whether Congress should overrule the voters and overturn a presidential election. I’ve served 36 years in the Senate. This’ll be the most important vote I’ve ever cast. President Trump claims the election was stolen. The assertions range from specific local allegations to constitutional arguments, to sweeping conspiracy theories. I supported the President’s right to use the legal system. Dozens of lawsuits received hearings in courtrooms all across our country. But over and over the courts rejected these claims, including all star judges, whom the President himself has nominated. Every election we know features some illegality and irregularity, and of course, that’s unacceptable. I support strong State led voting reforms. Last year’s bizarre pandemic procedures must not become the new norm.

Senator Mitch McConnell: (01:41)
But my colleagues, nothing before us proves illegality anywhere near the massive scale, the massive scale that would have tipped the entire election. Nor can public doubt alone justify a radical break when the doubt itself was incited without any evidence. The Constitution gives us here in Congress a limited role. We cannot simply declare ourselves a National Board of Elections on steroids. The voters, the courts, and the stage have all spoken. They’ve all spoken. If we overrule them, it would damage our Republic forever. This election, actually, was not unusually close. Just in recent history, 1976, 2000 and 2004 were all closer on this one. The Electoral College margin is almost identical to what it was in 2016. This election were overturned by mere allegations from the losing side, our democracy would enter a death spiral. We’d never see the whole nation except an election again. Every four years would be a scramble for power at any cost.

Senator Mitch McConnell: (03:58)
The Electoral College, which most of us on this side have been defending for years, would cease to exist. Leaving many of our States with no real say at all in choosing a President. The effects would go even beyond the elections themselves. Self government, my colleagues, requires a shared commitment to the truth and a shared respect for the ground rules of our system. We cannot keep drifting apart into two separate tribes with a separate set of facts and separate realities with nothing in common except our hostility towards each other and mistrust for the few national institutions that we all still share. Every time, every time in the last 30 years that Democrats have lost a presidential race, they’ve tried to challenge just like this. After 2000, after 2004, after 2016. After 2004, a Senator joined and forced the same debate and believe it or not, Democrats like Harry Reed, Dick Durbin, and Hillary Clinton praised, praised him and applauded the stunt.

Senator Mitch McConnell: (05:44)
Republicans condemned those baseless efforts back then and we just spent four years condemning Democrats shameful attacks on the validity of President Trump’s own election. So look, there can be no double standard. The media that is outraged today spent four years aiding and abetting Democrats attacks on our institutions after they lost. But we must not imitate and escalate what we repudiate. Our duty is to govern for the public good. The United States Senate has a higher calling than an endless spiral of partisan vengeance. Congress will either override the voters, over rule them, the voters, the States and the courts for the first time ever, or honor the people’s decision. We’ll either guarantee Democrats de-legitimizing efforts after 2016 become a permanent new routine for both sides or declare that our nation deserves a lot better than this.

Senator Mitch McConnell: (07:12)
We’ll either hasten down a poisonous path where only the winners of election actually accept the results, or show we can still muster the patriotic courage that our forebearers showed not only in victory, but in defeat. The framers built the Senate to stop short-term passions from boiling over and melting the foundations of our Republic. So I believe protecting our constitutional order requires respecting the limits of our own power. It would be unfair and wrong to disenfranchise American voters and overrule the courts and the States on this extraordinarily thin basis. And I will not pretend such a vote would be a harmless protest gesture while relying on others to do the right thing. I will vote to respect the people’s decision and defend our system of government as we know it.