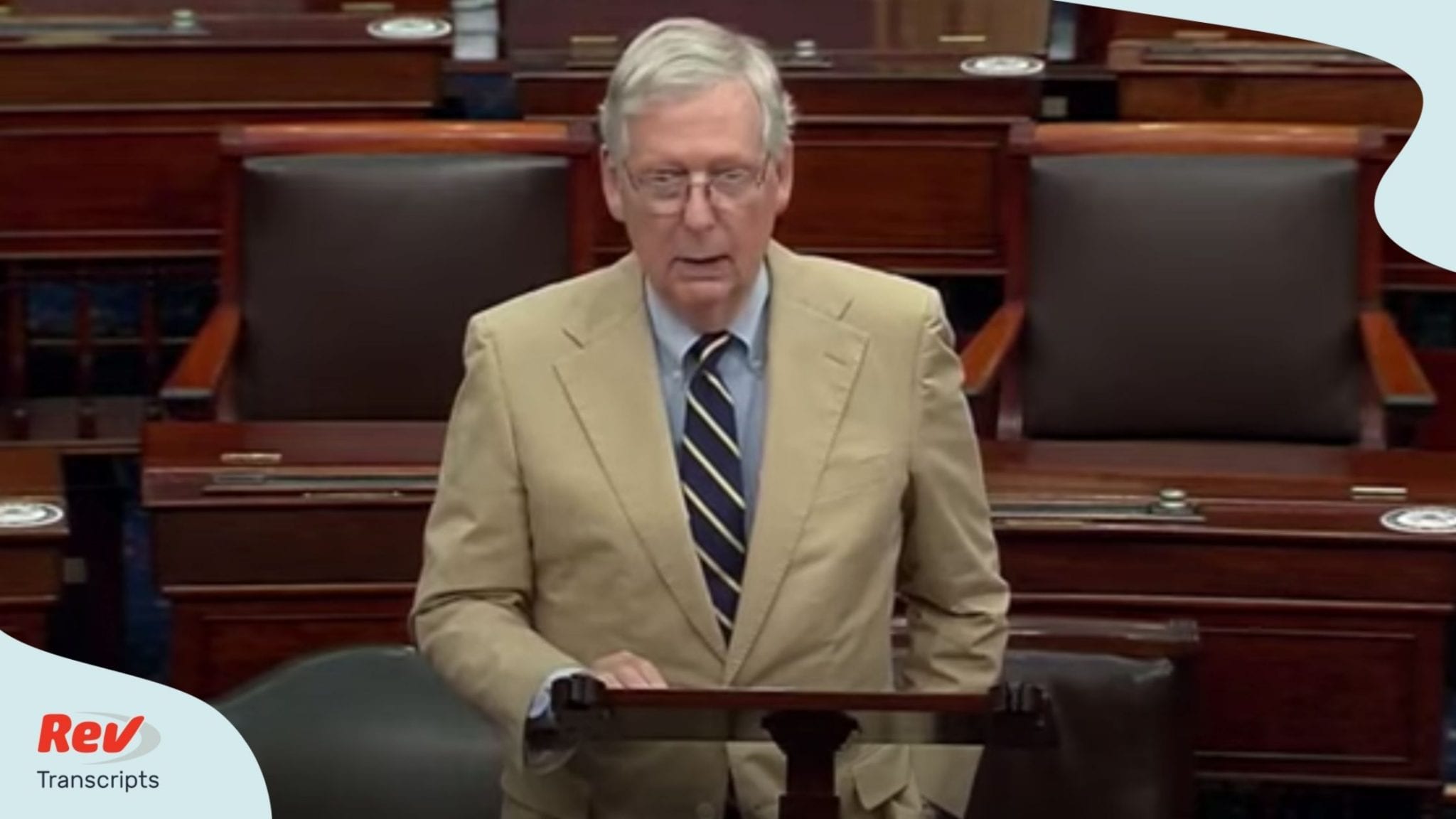 Senate Majority Leader Mitch McConnell spoke on the Senate floor on August 10 about coronavirus relief and negotiations with Democrats. Read the transcript of the speech here.

Mitch McConnell : (00:04)
I’d hoped that this week the Senate would be busy providing more corona virus aid, chairman and ranking members would be working overtime across the aisle to finalize another major pandemic relief package for the American people. After all, there are so many important ways in which American families need help and which Democrats say they see as big priorities, just like Republicans do. Priorities like continuing a federal add on to unemployment insurance, more tools for schools to safely reopen, more access to testing and diagnostics, more resources to develop vaccines and treatments, a new round of chucks to put cash in family’s hands ASAP, another round of the hugely successful paycheck protection program that small businesses have relied on, which was left out of the Democrats proposal. All of these things, and many more were in Senate Republicans, trillion dollar proposal for another coronavirus rescue package, focused on kids, jobs, healthcare, and legal protections to help our country reopen.

Mitch McConnell : (01:25)
I’d hoped the Senate would be spending this week turning a major agreement into law, but sadly for the country, sadly for struggling Americans, the speaker of the house and the Senate democratic leader decided we would not deliver any of that. None of it. For weeks Speaker Pelosi and democratic leader in the Senate, stalled and stalled and backroom negotiations with the administration’s team. For weeks, weeks, they held up important aid over non COVID related demands. They stayed true to their comments from very early on in the pandemic. This is the way they looked at it. They saw this pandemic as, “A tremendous opportunity to structure things to fit our vision.” That was the house democratic whip. Speaker Pelosi herself put it this way, “This is an opportunity. Every crisis is. Working families call this pandemic a crisis. They call it a nightmare, but leading Democrats call it an opportunity.”

Mitch McConnell : (04:12)
And we wanted to send huge sums to help us schools, which are one of the state’s biggest expenses. Typically, in a state budget, the two biggest items are education and Medicaid. Forget all that. Democrats are demanding that we send state and local governments a colossal amount of money with no relationship to actual need while they’ve only spent a quarter, 25%, of the money they’ve already gotten. Clearly this isn’t about COVID. Democrats think they smell an opening they have wanted for years to make Uncle Sam bail out decades of mismanagement and broken policies in places like New York, New Jersey, and California. And so they’ve decided that no working family anywhere in America can get another cent, not one cent, unless they get to create a trillion dollar slush fund for mismanaged states completely and totally out of proportion to pandemic needs.

Mitch McConnell : (05:20)
Here’s another one of those far left demands. Nobody gets another dime unless we indefinitely pay people more to stay at home than to go back to work. [inaudible 00:05:34], republicans agree we ought to continue additional federal jobless benefits during this extraordinary time. Senate Republicans tried several times to stop them from expiring. The democratic leader blocked us. Our view, which a majority of Americans share, is simply that it disincentivizes, rehiring and reopening to pay people more to stay home. Statement of the obvious. It disincentivize, rehiring, and reopening to pay people more to stay home. Plenty of Democrats said they saw the point and were happy to negotiate on this. Speaker Pelosi’s on number two, the house majority leader said, “It’s not $600 or bust.” That was the number two Democrat in the house. The senior Senator from Maryland said, “We certainly understand that we don’t want to have a higher benefit than what someone can make working.” Oh no, but the speaker and the democratic labor overrule them. No deal, no deal unless we pay people more to stay home.

Mitch McConnell : (06:48)
That’s not about COVID. It’s not about a real reopening. It’s about far left ideology. They preferred for the jobless benefits to go down to zero, zero, unless they could pay people more to stay home. Does anyone in this country really believed that relief for Americans should be totally contingent on bailing out states for mismanagement that predated the pandemic by decades? Does anyone really think it was better for jobless benefits to completely expire unless we pay people more not to work? And does anyone really think that Congress should walk away from countless subjects where a bipartisan agreement should be possible over these fringe positions? Do Americans think Democrats should walk away from school funding, testing, cash to households, preventing a spike in seniors Medicare programs, legal reform, and more over this?

Mitch McConnell : (07:58)
I think almost every family in America would answer these questions the same way. But unfortunately, Speaker Pelosi and the democratic leader have answered them the opposite way. They think they have political leverage over the President of the United States and so they’re willing to personally increase the pain for vulnerable families unless they get their way on matters not related to COVID. Republicans wanted to agree on the things we could agree to. Democrats said our way or the highway. Republicans wanted to send cash now, right now for schools, testing and unemployment benefits and argue overstate bailouts later. Democrats said nobody gets a penny unless Texas and Florida bail out New Jersey. That’s their position. Nobody gets a penny unless tuxes in Florida bail out in New Jersey. So this is where we are. The previous UI benefits expired. The PPP close its doors.

Mitch McConnell : (09:13)
Over the weekend, President Trump took stuff to soften the blow of the Democrats hostage tactics on American families who need help most. His decisions will help spare some Americans. Some of the pain from the Democrats hostage taking. From the beginning, from the very beginning, Mr. President, our side has tried everything possible to find common ground and deliver more help but the Democrats have said, no. At least the American people know the score. At least they know the score.

Mitch McConnell : (09:53)
Now, on a totally different matter. This weekend brought more unsettling news and the ongoing struggle for Hong Kong to preserve any shred of its civil liberties and self governance. One of the region’s most prominent pro-democracy advocates, Jimmy Lai, was arrested yesterday for alleged violations of the so-called National Security Law imposed by Beijing. Last year, after an historic election that saw millions flock to the polls to overwhelmingly reject President Xi’s preferred candidates, the Chinese communist party moved quickly to choke Hong Kongers free expression. Mr. Lee has been at the Vanguard of the vibrant Hong Kong based media and publishing world. He’s devoted much of his life to advancing precisely, precisely the sort of values that the CCP finds most repulsive; the freedom of thought and freedom of speech. To Senate, the country and freedom loving nations across the world stand with Mr. Lai and with all the peaceful demonstrators who have met the business end of the CCP’s repression.