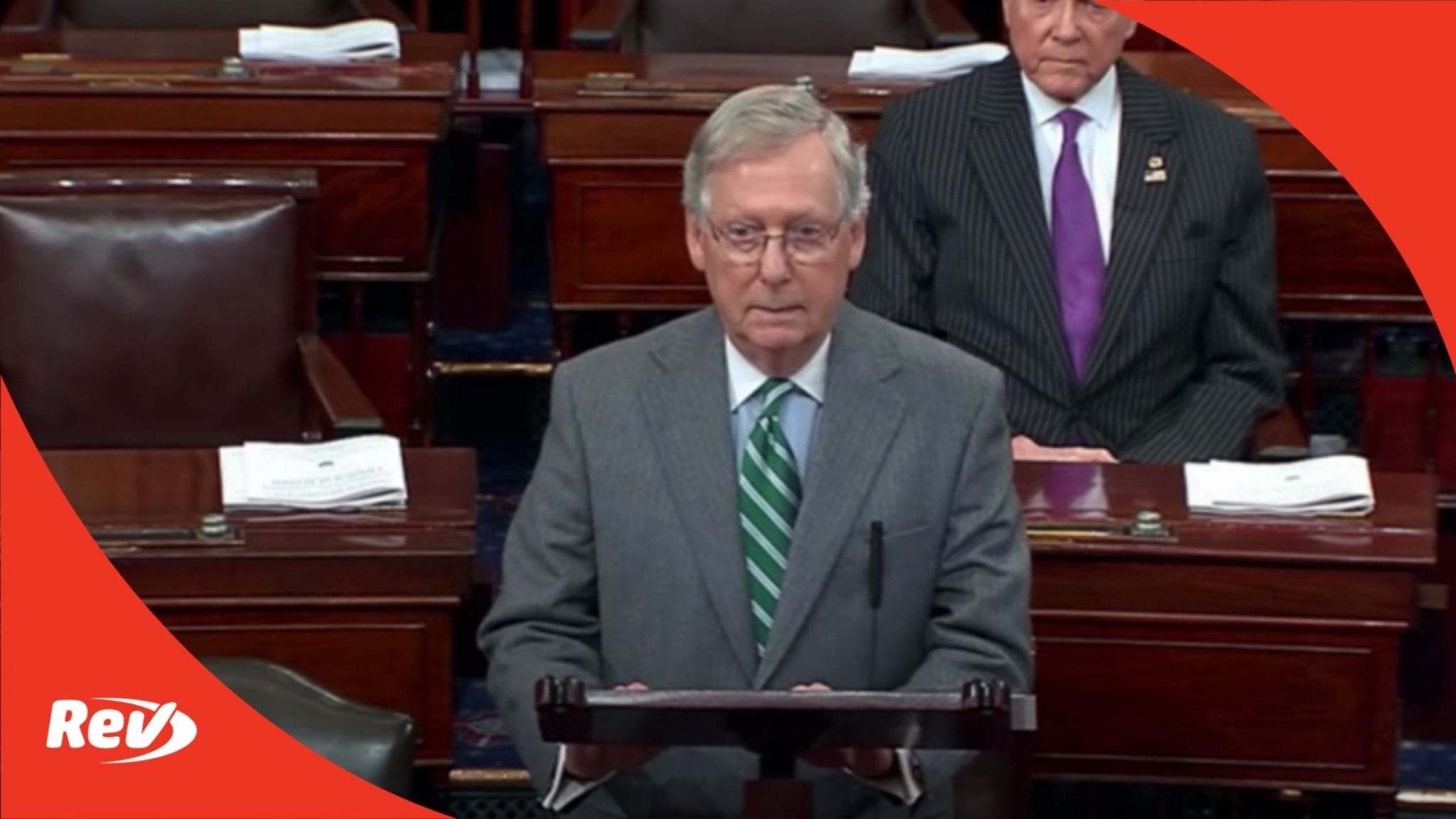 Mitch McConnell gave a speech on the Senate floor on March 28, 2016 on Barack Obama’s Supreme Court nomination Merrick Garland. He said, “Action on a supreme court nomination must be put off until after the election campaign is over” and of the American voters, “Let’s give them a voice. Let’s let the American people decide.” Read the full transcript here.

Mitch McConnell: (00:09)
Mr. President, the next justice could fundamentally alter the direction of the supreme court and have a profound impact on our country. So of course, of course, the American people should have a say in the court’s direction. It is a president’s constitutional right to nominate a supreme court justice, and it is the senate’s constitutional right act as a check on a president and withhold its consent. As Chairman Grassley and I declared weeks ago, and reiterated personally to President Obama, the senate will continue to observe the Biden Rule so that the American people have a voice in this momentous decision. The American people may well elect a president who decides to nominate Judge Garland for senate consideration. The next president may also nominate somebody very different. Either way, our view is this. Give the people a voice in filling this vacancy.

Mitch McConnell: (01:19)
Let me remind colleagues of what Vice President Biden said when he was chairman of the Judiciary Committee here in the senate. Here’s what he said, “It would be our pragmatic conclusion that once the political season is underway, and it is, action on a supreme court nomination must be put off until after the election campaign is over. That is what is fair to the nominee,” he said, “and is central to the process. Otherwise, it seems to me,” Chairman Biden went on, “we will be in deep trouble as an institution. Others may fret,” he said, “that this approach would leave the court with only eight members for some time. But as I see it,” Chairman Biden said, “the cost of such a result, the need to reargue three or four cases that will divide the justices four to four are quite minor compared to the cost to the nominee, the president, the senate, and the nation, would have to pay for what would assuredly be a bitter fight no matter how good a person is nominated by the president.” Chairman Joe Biden.

Mitch McConnell: (02:42)
Consider that last part. Senator Biden said that the cost to the nation would be too great no matter who the president nominates. President Obama and his allies may now try to pretend this disagreement is about a person. But as I just noted, his own vice-president made it clear it’s not. The Biden Rule reminds us that the decision the senate announced weeks ago remains about a principle and not a person. About a principle and not a person. It seems clear that President Obama made this nomination, not, not with the intent of seeing the nominee confirmed, but in order to politicize it for purposes of the election, which is the type of thing then senate Judiciary Committee Chairman Biden was concerned about. The exact thing Chairman Biden was concerned about.

Mitch McConnell: (03:43)
The Biden Rule underlines that what the president has done with this nomination would be unfair to any nominee, and more importantly the rule warns of the great cost the president’s action could carry for our nation. Americans are certain to hear a lot of rhetoric from the other side in the coming days, but here are the facts they should keep in mind. The current Democratic leader said the senate is not a rubber stamp, and he noted that the constitution does not require the senate to give presidential nominees a vote. That’s the current Democratic leader. The incoming Democratic leader did not even wait until the final year of George W. Bush’s term to essentially tell the senate not, he said, not to consider any supreme court nominee the president sent. The Biden Rule supports what the senate is doing today.

Mitch McConnell: (04:48)
Underlining that what we’re talking about is a principle and not a person. So here’s our view. Instead of spending more time debating an issue where we can’t agree, let’s keep working to address the issues where we can. We just passed critical bipartisan legislation to help address the heroin and prescription opioid crisis in our country. Let’s build on that success. Let’s keep working together to get our economy moving again and make our country safer rather than endlessly debating an issue where we don’t agree. As we continue working on issues like these, the American people are perfectly capable of having their say, their say, on this issue. So let’s give them a voice. Let’s let the American people decide. The senate will appropriately revisit the matter when it considers the qualifications of the nominee the next president nominates, whoever that might be.