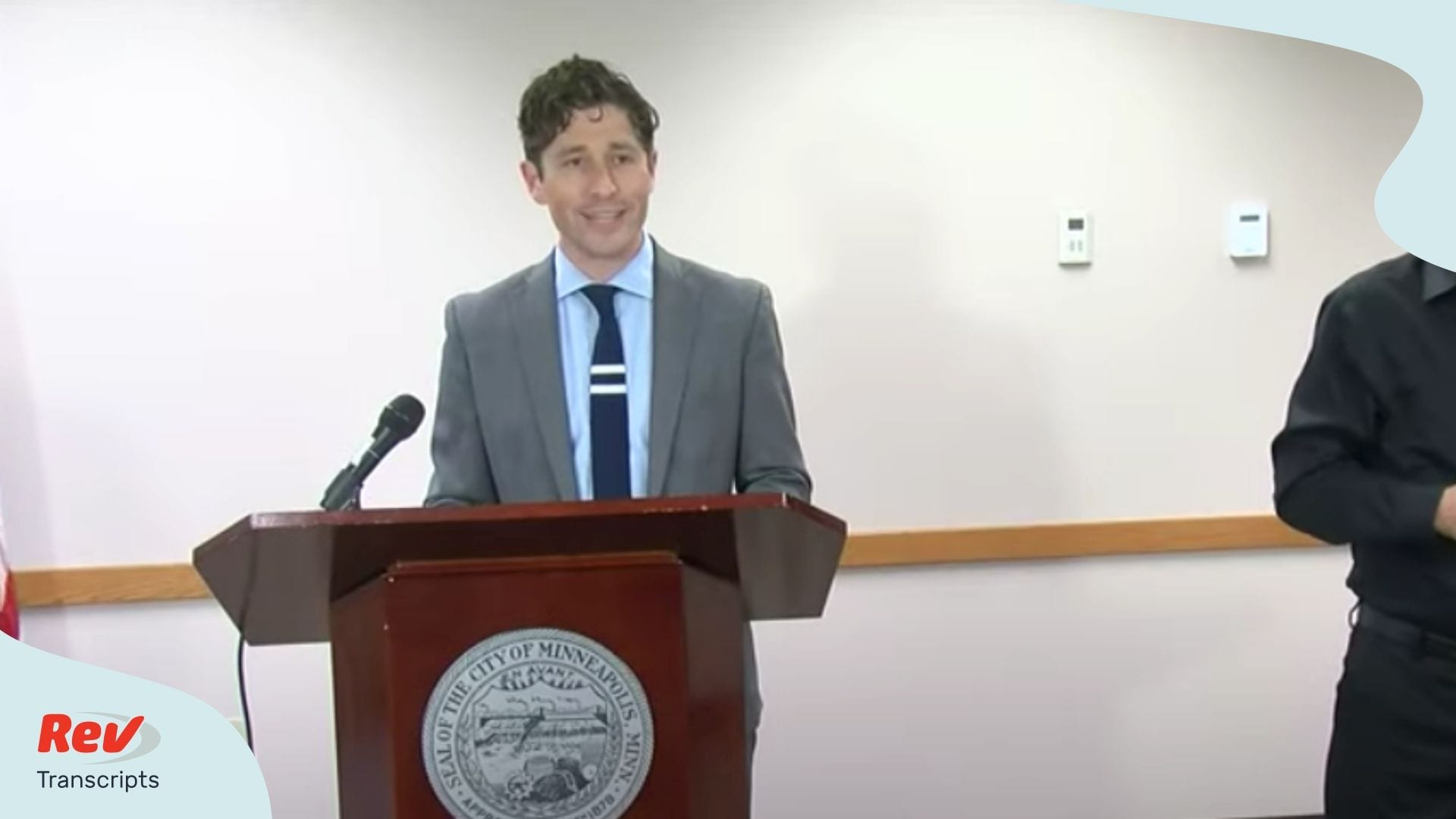 Jacob Frey: (00:00)
… Minneapolis Foundation around the early intervention system is very much needed. Having the willingness to both invest and use in that technology shows his willingness to challenge the status quo, to affect the culture shift, to demand greater accountability, and to use real time data to get that early intervention, to prevent the wrongful conduct from happening in the future. Chief Arradondo right now, and you saw this during the press conference, is leading our city forward in a beautiful way with clarity and purpose, with respect to the Minneapolis Police Department.

Jacob Frey: (00:44)
I want to be very clear. We don’t just need a new contract with the police. We need a new compact with the police, one that centers around compassion and accountability, one that recognizes that the way things have been done for decades and decades is not acceptable. We need change. We need to go farther than we ever have in the past. It can’t be lip service. It can’t be the status quo. And when we look back many years and decades from now, we need to understand this point in time as the moment where we made a decision, where we made a decision that the years of lack of accountability is unacceptable, that a restructure is necessary and we are committed to it.

Jacob Frey: (01:45)
So in seeing through that dramatic and sweeping change, I want to be very clear that I have Chief Arradondo’s back. I also want to be very clear that this is a person who’s born and bred in Minneapolis. He came to the Minneapolis Police Department to make a change in the community, to keep people safe and to deliver service that was at the time a very new model. That’s the model that he brought when he was a beat officer on the north side. That’s the model that he now brings to the Chief’s office. This is someone who quite literally sued the Minneapolis Police Department for racial discrimination and he won. Now he’s our Chief and he has my support. I have the utmost confidence in our partnership as we move forward, to be able to see that full revamping and structural change and to heal our city. I’ll answer any questions you may have.

Speaker 2: (02:50)
Mayor have you spoken with Council President Daniel or any of the other council members who are talking about defunding the Minneapolis Police Department? And what are those conversations about?

Jacob Frey: (03:02)
Yes. I have had a few conversations with council members that talked about ending the police department, and there are various different words that have been used. I do not want to put words into their mouths. What I will say is that I am committed to that deep structural reform. If you’re talking about having a full culture shift in the Minneapolis Police Department, I’m on board. If you’re talking about making sure that we aren’t criminalizing poverty or addiction and making sure that we have a different conceptual approach to how we handle it, I am fully on board. But if you’re talking about abolishing the police department, no, I am not. I’ve made that clear.

Speaker 3: (03:45)
What are the practical implications of withdrawing from these negotiations? Do officers [inaudible 00:03:50] policing terms? Does that go away? Do you need to do anything for procedurally, either in the courts or the city council?

Jacob Frey: (03:58)
Well, from a basic procedural standpoint, by withdrawing from the police contract negotiations, there won’t be additions in pay. There won’t be a number of other facets that we want to be negotiating on. I don’t want to tell you too much about what those negotiations might be, because it would ruin the leverage that we presently have. And by the way, we’ve got a lot of leverage right now. We want to be able to channel all of this anger and sadness and frustration towards a shift in the way that we do business. And right now is the time.

Speaker 4: (04:37)
Mayor, Chief said he’s spoken with Lieutenant Bob Kroll and made his feelings very [inaudible 00:04:43]. He didn’t discuss with us what those conversations were. So he shied away from any questions about whether he thought he should resign as part of this restructure. What are your thoughts on the future of Lieutenant Kroll and the federation?

Jacob Frey: (04:57)
I’ve had several conversations with Chief Arradondo, although I have not spoken directly with Bob Kroll. And let me be clear, the rhetoric that Bob Kroll has put out is detrimental, not just to our city, but also to the police department. For someone that complains so much about a lack of support and trust of police officers, he’s one of the primary reasons for that lack of trust and support. I’ve been very clear about where I stand with regard to his comments and like I said, we are in conversations right now and I’ve been talking with the Chief as well.

Jacob Frey: (05:43)
Lieutenant Kroll has not been helpful in any way, shape or form to generating accountability and measures of reform that we’ve been trying to see through. And I want to be very clear, that for generations now through many different administrations, you’ve had progressive forward thinking mayors and Chiefs that have been committed to seeing change. And if we’re going to ignore the elephant in the room, we’re going to continue to not see the progress that is necessary to be made. And what I’m talking about very clearly, that inhibition to progress, that elephant in the room, it is the police union, it’s the collective bargaining agreement. It is the mandatory arbitration provisions that are going through state laws. So when we look at reform, we need to be identifying the necessary buckets that need to be changed.

Jacob Frey: (06:36)
Some of it is city policy that in some instances can be done unilaterally. Some instances, that unilateral nature is obstructed by the police union contract itself and the negotiations that we go through on a regular basis. Some of that is the arbitration and the laws that have been set up through the state level that prevent us from seeing full accountability. When I say culture shift, let me talk about what I mean. Culture shift, to a certain extent, is about people. People build culture. The way you shift the culture is you get the right people into the jobs that have that mentality of compassion and care and respect for the dignity of every single human being. And you’re able to get the individuals, the officers out that do not have that mentality. And there have been more than a few instances in recent and past years where Chiefs and mayors alike have tried to discipline and/or terminate, and the discipline or termination works its way through the system and at some point hits a roadblock.

Jacob Frey: (07:49)
In some cases that’s the arbitration at the very end, where I think somewhere around 45% of the cases that have gone through have been reverted and the officer is then restored to the department. In other cases, there have been other road blockages. But it is those road blockages that we need to address now. I think the hope that I have is that we now have the necessary momentum and urgency to act. There’s a lot of people that are impatient, and I think that impatience is a necessary tool in ultimately getting the reform, the full restructuring needed.

Jacob Frey: (08:42)
I don’t think that I’ve been the first mayor to talk about these road blockages and I’m sure I won’t be the last. The fact that we now have this urgency around the situation, the fact that we now have this anger and frustration does give us, if we’re able to harness it, the ability to push forward and hopefully get some of these things done. Let me be clear. It needs to happen. This really can’t be optional.

Jacob Frey: (09:14)
Well, Chief Arradondo interviews every single new cadet that comes in. And the reason for literally taking weeks and I think like a month and a half to interview every single new cadet is he wants to be sure they are of the right mindset, the right mentality, and are serving the 440 some odd thousand residents that we have in our city with compassion and care. That’s the purpose. And if we’re going to see that full culture shift, yes, there does need to be changes. And as I said, people build a culture. And Arradondo is not just laying the seeds, but as you saw today, he’s also taking the necessary quick action to make sure that we’re seizing this moment.

Speaker 7: (10:04)
Can you provide any more detail on these outside groups that might be brought in to monitor contract negotiations or contract developments? Who are they and what will they be looking for?

Jacob Frey: (10:17)
As I believe the Chief mentioned during his press conference, which is what I think you’re referencing, the need to have an outside entity and including lawyers that are able to come in, review the existing contract, not just make amendments to, not just cut around the edges, but find ways to yes, shift how that contract itself functions. And if there are road blockages that are extra contractual, like for instance, state law, we can also examine those principles as well. And so this outside review, I think, is going to be very helpful in finding where the problem areas are and the areas that perhaps can be shifted up.

Speaker 7: (10:55)
Have you chosen people to do that outside review? And if not, what will the criteria be for choosing them?

Jacob Frey: (11:03)
I know that we’re in the process of working with both the Chief, as well as our partners at the Minneapolis Foundation and others to figure out who the specific individuals are. We can get you the criteria.

Jacob Frey: (11:29)
Sure. I think the Chief could probably answer some of these questions better than I, but I’ll at least take a crack at it. It’s not as if we don’t have the data. We do. But it’s located in several different places, in some instances on a piecemeal basis. And what you have is officers that have, in some instances, reported to different supervisors at different times. And so while one supervisor may have a deep understanding as to the upsides and downsides of this particular officer as to the problems that they’ve experienced, that information doesn’t necessarily transition by nature. And so what the Joyce Foundation and this EIS service, this early intervention system allows us to do is to see that information on a real time and be able, hopefully, to predict future patterns. The University of Chicago has done quite a bit of research around determining officer misconduct and what leads to that ultimate action of severe misconduct. And if we’re able to pry that out at an earlier timeframe, it helps a whole lot. Thank you.