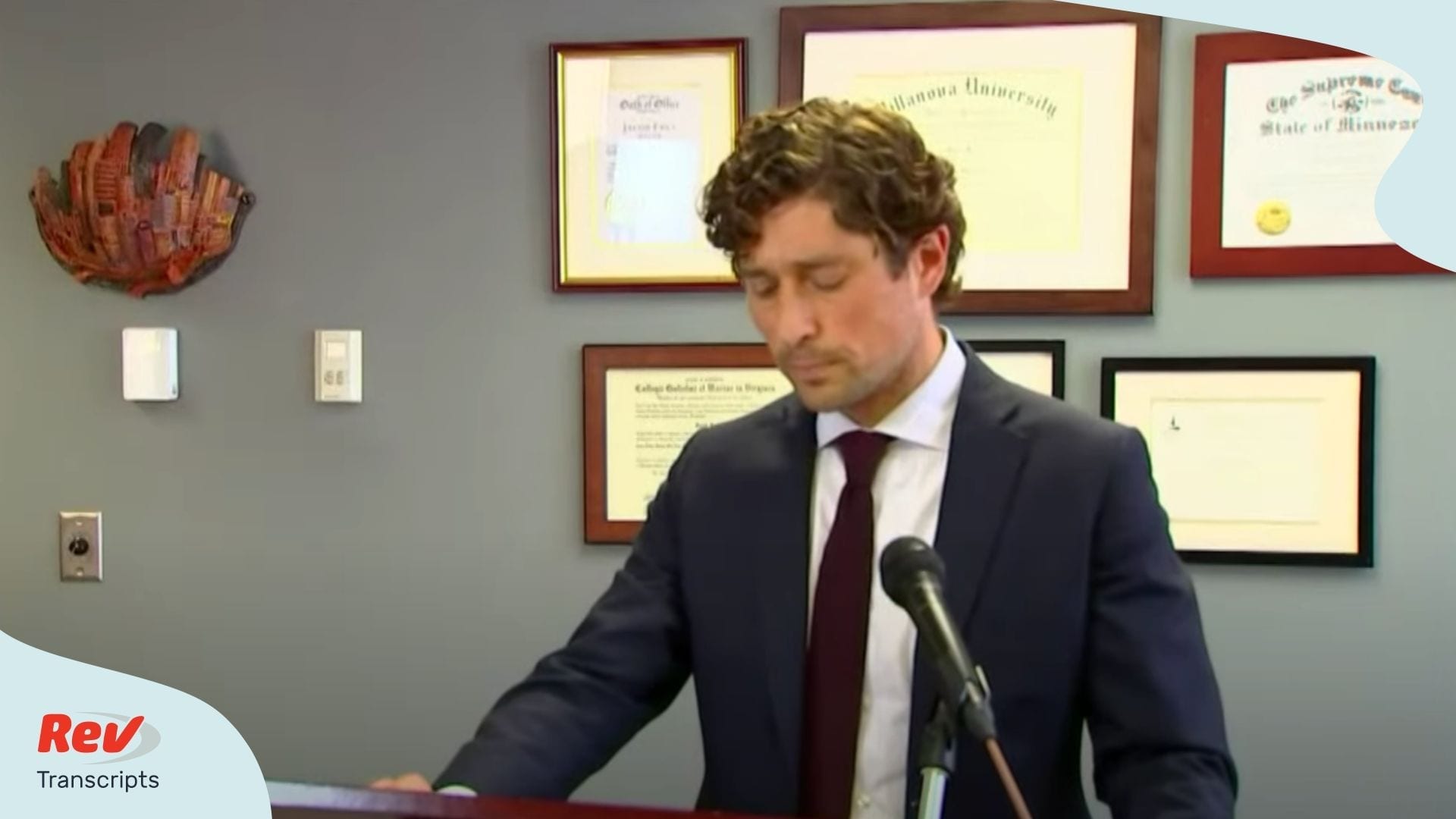 Mayor Jacob Frey: (00:00)
I wanted to take a moment to speak with all of you today, to answer any questions from the press, as well as to discuss the killing of George Floyd. Mayors can shape events in their city, but more often than not it’s events in our city that shape us. There are precedents and protocols sitting in the reserves of institutions just like this one, that will give you about a thousand reasons not to do something, not to speak out, not to act so quickly. And I’ve wrestled with, more than anything else over the last 36 hours, one fundamental question. Why is the man who killed George Floyd not in jail?

Speaker 3: (02:55)
Do you want to wait? I mean, do you need to see the cause of death? We don’t a public cause of death at this point. He died an hour after the incident. Obviously by saying what you are, you don’t need to wait, but could you explain why that’s not important in making a criminal charging decision?

Mayor Jacob Frey: (03:11)
I’m not going to weigh in on the evidence. I know there’s clearly more evidence to come, but I will say that based on what I saw in the video, this is the decision that I am making, obviously as not a prosecutor myself.

Mayor Jacob Frey: (03:33)
I have relayed my call to action to the Hennepin County attorney Mike Freeman, yes.

Speaker 3: (03:40)
What do you want to see this officer charged with specifically?

Mayor Jacob Frey: (03:44)
I want to see a charge take place. I want to see the justice for George Floyd. And me commenting on either the evidence, obviously much of which is not out yet and/or a specific charge would inhibit that measure. So again, I want to see the charge of the arresting officer take place, but if we want to see that charge, it would not be wise for me to provide the specifics of a form of murder.

Liz: (04:20)
Mayor, multiple council members have raised questions about the way police reacted to the protest last night. Where were you during those protests and what role did you play in determining how police responded to them?

Mayor Jacob Frey: (04:32)
Thank you for the question. The question from Liz was what role did I play in responding to the protests that were occurring last night? And I’d like to speak a little more broadly about this as well. So, right now more than ever, I get the need to protest. I fully understand and appreciate it. People need a way to vent, especially in a time of so much sorrow and anger. And I’m not a parent yet, but I will be soon. And I can’t begin to grasp the mix of emotions, of anger, of sadness that so many parents of black children have through our city and what they must feel in putting their child to bed without knowing what cards they will be dealt and not knowing how their safety might be put at risk, nobody out there will fight harder for the first amendment protections and freedom of speech than I will. Nobody will fight harder for those rights to protest than I will. But those rights, they must stop when others’ public safety are put at risk.

Mayor Jacob Frey: (06:03)
The cars and the buildings that were broken or broken into in some form had live guns and ammo in them. And I spoke with our Chief Arradondo last night, who is an exceptional leader in our black community and known as an exceptional chief nationwide. And he told me that he could not run the risk of one tragedy leading to another. Our chief made the decision and I support our chief. I trust his judgment. And there’s an inherent tension. There’s an inherent problem in this world of soundbites where those who are protesting peacefully get lumped in with those that are not. Where those who are policing compassionately get lumped in with those who are not. And by the way, I want to commend the 99% of protesters that were there last night, doing so in a peaceful manner. And we need to be straightforward. We need to be straightforward and honest with people 100% of the time. We need to continue to be calling on our better angels, especially during this time where one crisis is sandwiched in on another. I’m committed to doing that. Next question.

Speaker 6: (07:47)
No mayor has ever publicly called out a prosecutor to bring criminal charges against a police officer, at least here in Minneapolis. What went through your mind? What went into this decision to come up here and do what you’re doing today?

Mayor Jacob Frey: (08:01)
The question was that you stated that no mayor has ever publicly called for the prosecution of one of his or her own officers before, at least in, I think you said in our state.

Mayor Jacob Frey: (08:16)
And the question is what went into that decision?

Mayor Jacob Frey: (08:21)
I mentioned earlier that there are protocols, there is guidance, there’s precedent that is almost instilled in the walls of these institutions like city government as if it were mortar. And so many of those protocols say that you shouldn’t act quick. You shouldn’t make a decisive decision. You shouldn’t speak out. And they’ll give you a thousand reasons why that guidance is given. But there was one question in my mind that I could not answer. If I’m tasked with being honest with people, which I do promise to be, how could I argue? How could I not speak out when an offense took place that you or I, or many other people through our city would have been behind bars if they did? Yet this particular individual, this officer was not.

Mayor Jacob Frey: (09:43)
I could not answer that question. And because of that, I felt I had to speak out. And by the way, black men have been put in prison before for far, far less.

Speaker 7: (09:55)
Mayor, one of the early police reports from the scene described some fighting, that he resisted arrest. Have you seen any evidence that that has been borne out? Obviously, we’ve seen the videos from surveillance cameras, Darnella Frazier’s, but we haven’t seen anything that would suggest any resistance. Have you seen any at all in any of the evidence you have seen?

Speaker 7: (10:40)
And then the other question is a $20 counterfeit bill I’ve been told by sources wouldn’t even get you booked into jail right now because of COVID-19. Can you explain the heavy presence at that specific grocery store at that specific time, why police felt so compelled to keep that “suspect” there?

Speaker 8: (11:22)
When can we expect to see the body camera footage from the officers involved? When will that be released publicly?

Mayor Jacob Frey: (11:29)
I’d like to release it as soon as is possible while not compromising the investigation, but more importantly, the charge that I do hope will come forward.

Mayor Jacob Frey: (11:46)
The investigation itself is in the hands of the BCA right now. And actually there are other investigative bodies as well, the FBI being one of them. We’re looking at the legal logistics of how exactly that would work. But again, we want to be as transparent as possible. There’s every reason to provide the public with the truth. There’s also every reason to make sure that this investigation takes place in a way where we can get to a charging decision as soon as possible.

Michelle: (12:17)
You mentioned you were calling on local authorities to charge the officer. Are you taking a position on how federal investigators should handle their portion of this?

Mayor Jacob Frey: (12:29)
The question was, so I’m calling on local authorities to make a decision and to come forward with a charge of the arresting officer. The question is whether I’m asking federal authorities to do the same. My understanding is that the charging decision lies with the Hennepin County attorney. To the extent that I’m wrong and there is a charging decision that also lies with other bodies of government, yeah, I’m calling on that too.

Mayor Jacob Frey: (13:18)
It is a fair question. The question was, what are we talking about in time? Are we talking about three days, two weeks? Michelle, to the extent I could give you an answer on that, I would. I do not know. I would like to see that footage released as soon as possible. If we could do so in a way where we could ensure that investigation was not compromised, the charging decision was moved forward with in the very near future, yeah, I’d do it right away.

Michelle: (14:09)
Can he be unbiased in making a decision about whether a Minneapolis police officer should be prosecuted as criminals?

Mayor Jacob Frey: (14:16)
So the question was whether we can be confident that the Hennepin County attorney can not have a bias in making a decision about this particular case. I think we’ve seen a very long history in this country of charging decisions being made that did not do justice to the victims, especially when the potential charging decision was against a law enforcement individual, and even more so when that law enforcement officer was white and the victim was black. I’ve stated what I want to see. I am very hopeful that the evidence will be reviewed and a charging decision will not just be made, but there is a decision specifically, there is a decision to charge. I’m not going to comment further than that.

Mayor Jacob Frey: (15:45)
Sure. I’ll give it to you straight up. So the question was, can I elaborate a little bit more on my belief that the arresting officer should be charged? And yes, we watched for five whole excruciating minutes as a white officer firmly pressed his knee into the neck of an unarmed handcuffed black man. I saw no threat. I saw nothing that would signal that this kind of force was necessary. By the way, that particular technique that was used is not authorized by the MPD. It is not something that officers are trained in on and should not be used, period. And so in so many of these horrible instances in which law enforcement tragically kills a member of our community, we are talking about split second decisions. In so many of these instances, we are talking about four or five or six seconds, sometimes less, where a decision was made that tragically killed somebody and impacted a whole community.

Speaker 12: (18:45)
Real quickly, have you seen the body camera footage yourself?

Speaker 13: (18:52)
When did you find out the circumstances were different than that initial news release?