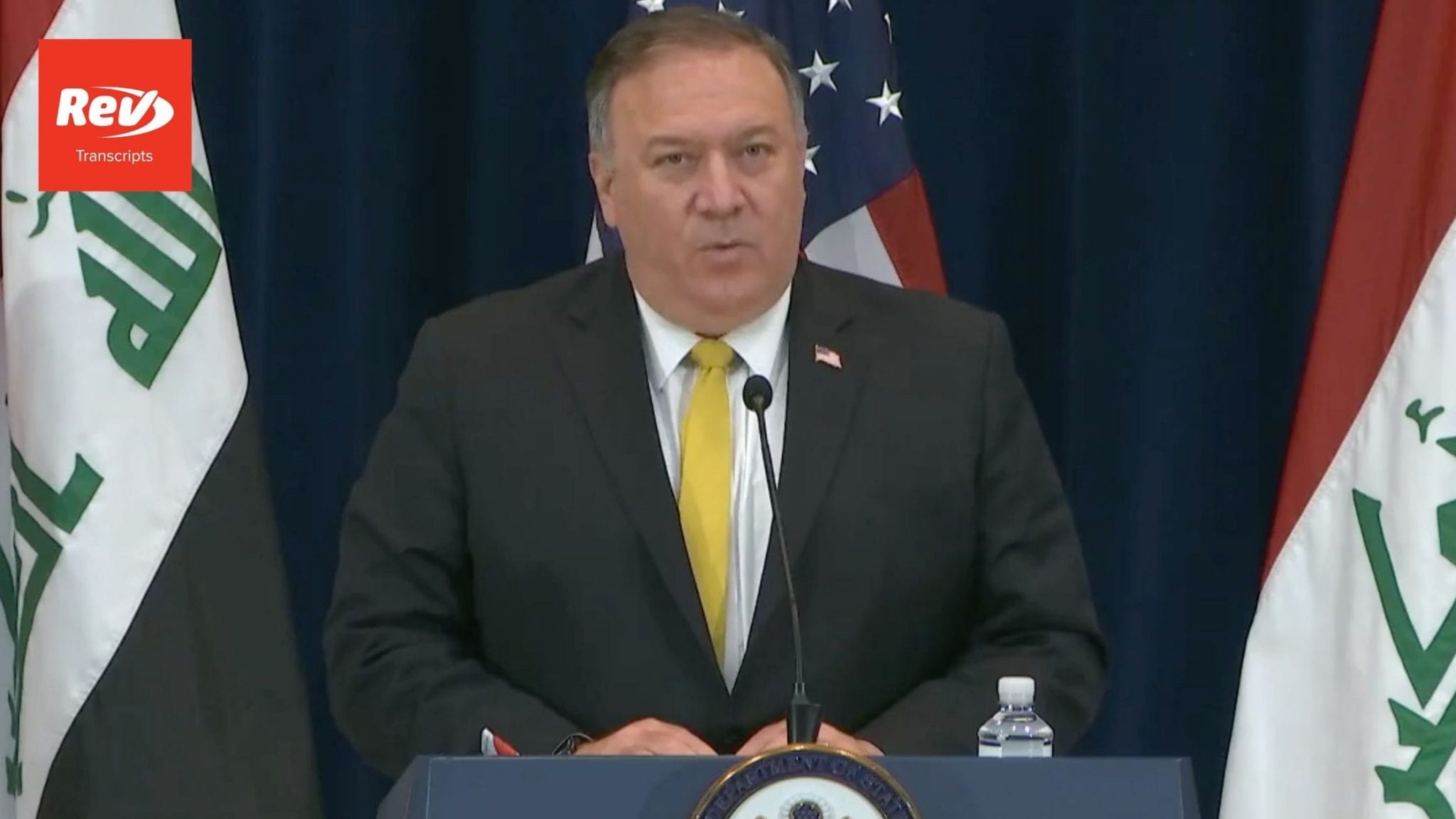 US Secretary of State Mike Pompeo held a joint press conference with Iraqi Foreign Minister Fuad Hussein on August 19. Read the transcript of the briefing here.

Secretary Mike Pompeo: (00:00)
Good morning, everyone, and thank you. Thank you, Dr. Fuad and the entire Iraqi delegation for joining us here in Washington today. We had a good set of discussions, very productive building on the virtual US Iraq strategic dialogue that we began back in June of this year. The state of our partnership is very strong. We’re committed to helping Iraq achieve economic prosperity, freedom from foreign meddling in its internal affairs, and improve relationships with its neighbors as well. This is what the Iraqi people want too, a stable, prosperous, independent Iraq. And an Iraq, which is for Iraqis and the Iraqis who protested last year couldn’t have made that any more clear. We touched on religious freedom, a priority for the Trump administration and the key to the Iraqi nations flourishing.

Secretary Mike Pompeo: (00:51)
As Iraq moves forward from the ISIS persecution and genocide, the US is helping the most vulnerable, including Christian [inaudible 00:01:00] and [inaudible 00:01:01] recover. We devoted almost half a billion dollars to help restore these communities, yet there’s still work to do. Arms groups, not under the full control of prime minister, have impeded our progress. Those groups need to be replaced by local police as soon as possible. I assured Dr. Fuad that we could help and that we would help. Our contributions come in addition to other humanitarian assistance, which we’ve provided to Iraq. And it’s only fitting that today, world humanitarian day, that I can announce that the US aid will provide an additional $204 million for life saving food, safe drinking water, and healthcare for the Iraqi people.

Secretary Mike Pompeo: (01:43)
We’re proud too of the private investments that are being made. We look forward to the day when Iraq won’t need assistance, government assistance, and we’ll be fully supported by a foreign investment in the own great work that the Iraqi people do. We want an Iraq that’s corruption free, prospers, and fully integrated into the global economy. I urge Baghdad to clinch a budget deal with the Kurdistan regional government.

Secretary Mike Pompeo: (02:08)
We also had good discussion on Iraq’s energy sector, a major driver of economic activity in Iraq. We anticipate announcements on energy deals between US companies and Iraqi government shortly. In our political dialogue, I emphasize the importance of the rule of law functioning, government and regular electoral processes. The United States supports the Iraqi government as it prepares for early parliamentary elections. We’re discussing ways to provide substantial support to the UN assistance mission for Iraq for just that purpose.

Secretary Mike Pompeo: (02:40)
We talked too about how the United States and Iraq can work together to make Iraq more safe and stable. The United States is committed to supporting Iraq security forces, including through the NATO mission and the global coalition to defeat ISIS, to curb the power of militias that have for far too long terrorized the Iraqi people and undermined Iraq’s sovereignty. We can see a future when American tourist visits Iraq historical sites, when our military men and women attend each other’s military staff colleges. And towards these ends, we discussed how the United States could help preserve Iraq’s rich cultural heritage and religious diversity and support education in Iraq as well. We share not only goals and sacrifices with our Iraqi friends, but also a vision and hope. These ideals are the foundation for a thriving, steady partnership, which is making good progress. Thank you, Dr. Fuad. The floor is yours.

Foreign Minister Fuad Hussein: (03:35)
[foreign language 00:03:41] thank you very much. Thank you very much, your Excellency, Mr. Secretary. And thank you very much for the great reception. Today, we launched the second round of the strategic dialogue between the delegations of the Iraqi government and the US government. And we had a good and important meeting with his Excellency, the secretary. And we talked during the meeting about a series of issues that concern the situation of Iraq and the bilateral relations and the political situation in general, and the regional situation, in addition to issues pertaining to the economic ties and how to combat COVID.

Foreign Minister Fuad Hussein: (04:40)
And in the strategic dialogue that started today, there are some asks about these issues, and there has been a reaffirmation on the joint work on the different fields, the United States of America and Iraq. We are both in the same trench in fighting ISIS, and we are still in the same trench. And we will work together to defeat the terrorist elements and the terrorist factions under the arm terrorist groups in Iraq.

Foreign Minister Fuad Hussein: (05:16)
And we reaffirmed that we will work continuously on this field, which is combating terrorism. And we also reaffirmed during our talks, the continuity of the talks and the dialogue in order to reach common work on other fields, such as energy. And there have been memorandum of understanding and cooperation signed in this field, especially in terms of power, oil, at the health sector, education, higher education, health, and these memorandum will be signed today.

Foreign Minister Fuad Hussein: (06:04)
The dialogue is continuous and positive results will be the outcome of this dialogue for the interest of both countries and both people. I would like to thank his Excellency, the secretary for the great reception and for his time, for the fruitful talks and for the fruitful results. And thank him very much for talking about all of these issues.

Xena Ebraheem: (06:47)
You discussed in the first strategical dialogue that there’ll be a reduction of US forces in Iraq. Is there a timetable? And is there specific numbers? [foreign language 00:07:01],

Foreign Minister Fuad Hussein: (06:58)
Your Excellency, is there any memorandum of understanding that could be signed today pertaining the excavation [inaudible 00:07:09]?

Secretary Mike Pompeo: (07:05)
So we don’t have any announcements to make with respect to numbers, but I would urge everyone as we’ve gone through the strategic dialogue not to focus on that. The real focus is on the joint efforts that we’re making along every dimension, whether that’s economic efforts, humanitarian assistance efforts, security assistance, all of those things. We continue to understand that the Iraqi people need that. The Iraqi people sovereignty depends on continued American commitment to support them and provide that assistance to them. We’re determined to do that.

Foreign Minister Fuad Hussein: (07:51)
Regarding the signing of a memorandum of understanding or an agreement with [inaudible 00:07:57], I believe that it will be signed today. Yes.

Carol Morello: (08:06)
Thank you. Mr. Secretary, when will you be going to New York to begin the process of triggering snapback sanctions against Iran? And can you explain how you intend to enforce them without full Security Council backing? They seem to have given every signal that they are simply going to ignore them. And so, what are you going to do to make it happen? And Mr. Foreign minister, do you agree with the United States on the need for snapback sanctions against Iran and how will that impact Iraq? Thank you.

Secretary Mike Pompeo: (08:40)
So, Carol, I don’t have any announcement on timing on when we’re going to do. President’s made clear we’re going to do that soon. And we will. Second, these will be fully valid, enforceable UN Security Council resolution. We have every expectation that will be enforced just like every other UN Security Council resolution that is in place. You have to remember, 2231 isn’t a US document. It is a UN Security Council document. It has a set of provisions. It has a set of rights and obligations. And we will be in full compliance with that. And we have every expectation that every country in the world will live up to its obligations, including every member of the P5 and every member of the UN, that will take seriously the international commitments to which they have signed up for. It’s a longstanding commitment to the United States to do that. We are confident that every country will see that it is in their best interest that UN Security Council Resolution 2231 is fully enforced as a valid extent continuing set of obligations. And so, the enforcement mechanisms will be just the same enforcement mechanisms we have for all of the UN Security Council resolutions.

Foreign Minister Fuad Hussein: (09:54)
With respect to the United States policy, vis-a-vis Iran, and the impact of this policy on the situation in Iraq. First of all, we are talking about Iraqi policy and I am not here to talk about US policy. So his Excellency, the secretary can talk about the US policy. With respect to the Iraqi policy, we see that the United States of America is an ally and a strong ally for Iraq. And we will continue to protect this alliance and to deepen it and expand it. And regarding Iran, Iran is a neighboring country to Iraq. And as a result, there are ties pertaining to geography, history, culture, economy. And the Iraq’s foreign policy is based out of Iraq’s national interest. We want to have good relations with our neighbors provided that nobody interferes in Iraq’s affairs, and the Iraqi decision will be made by the Iraqis. And we want to protect our alliances and relations with others, including the United States of America.