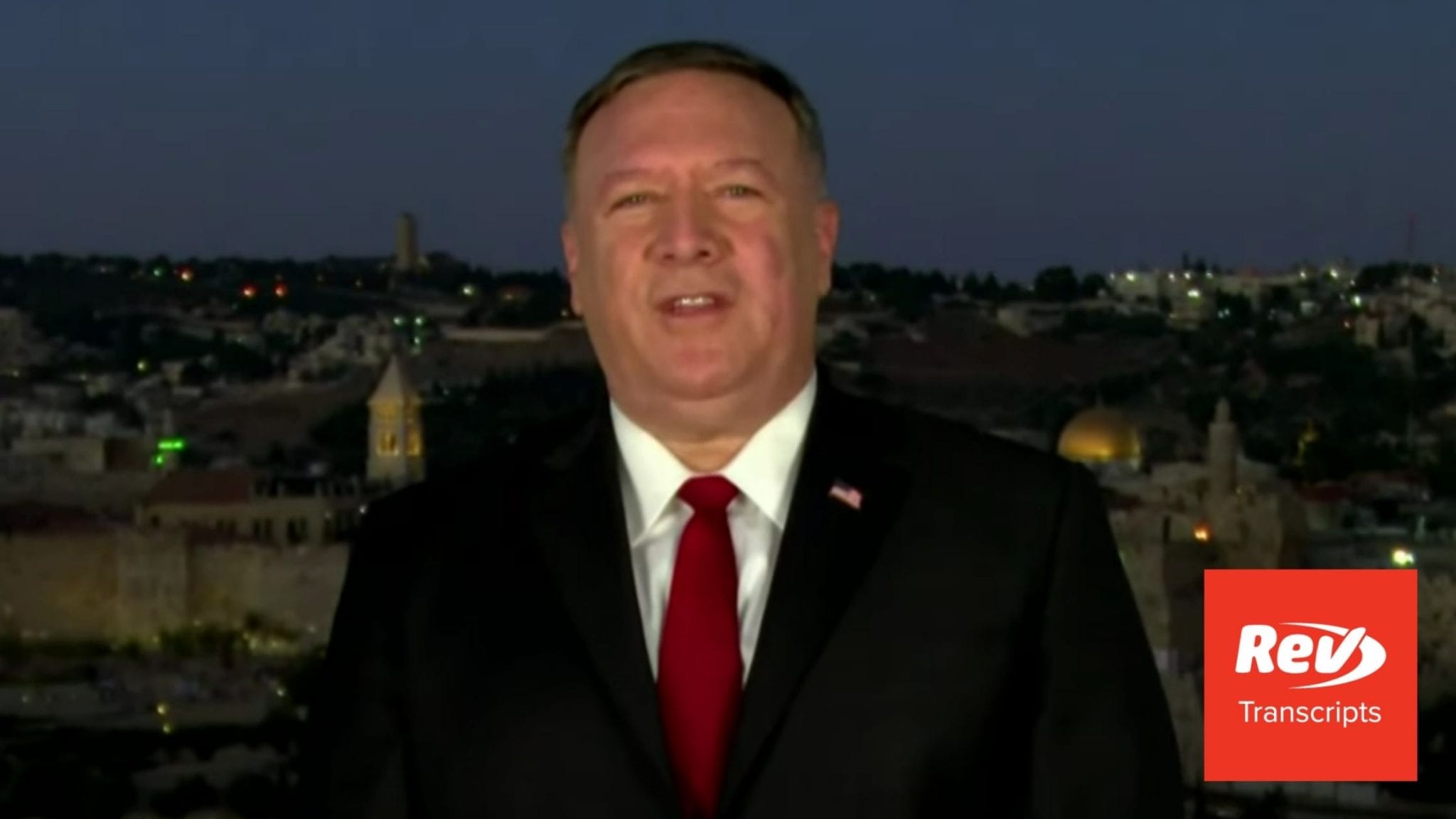 Mike Pompeo: (00:01)
I’m speaking to you from beautiful Jerusalem, looking out over the old city. I have a big job. As Susan’s husband and Nick’s dad, Susan and Nick are more safe and their freedoms more secure because President Trump has put his America First vision into action. It may not have made him popular in every fort and capital, but it’s worked. President Trump understands what my great fellow Kansan President Eisenhower said, “For all that we cherish and justly desire for ourselves or for our children, the securing of peace is the first requisite.” Indeed, the primary constitutional function of the national government is ensuring that your family and mine are safe and enjoy the freedom to live, to work, to learn, and to worship as they choose. Delivering on this duty to keep us safe and our freedoms intact, this president has led bold initiatives in nearly every corner of the world.

Mike Pompeo: (00:58)
In China, he’s pulled back the curtain on the predatory aggression of the Chinese Communist Party. The president has held China accountable for covering up the China virus and allowing it to spread death and economic destruction in America and around the world, and he will not rest until justice is done. He has ensured that the Chinese Community Party’s spies posing as diplomats in America are jailed or sent back to China and he has ended the ridiculously unfair trade arrangement with China that punched a hole in our economy. Those jobs, those jobs are coming back home.

Mike Pompeo: (01:33)
In North Korea, the president lowered the temperature and against all odds got the North Korean leadership to the table. No nuclear tests, no long range missile tests, and Americans held captive in North Korea came home to their families, as did the precious remains of scores of heroes who fought in Korea. Today, today because of President Trump, NATO is stronger, Ukraine has defensive weapon systems, and America left a harmful treaty so our nation can now build missiles to deter Russian aggression.

Mike Pompeo: (02:04)
In the Middle East, when Iran threatened, the president approved a strike that killed the Iranian terrorist Qasem Soleimani. This is the man most responsible for the murder and maiming of hundreds of American soldiers and thousands of Christians across the Middle East, and you’ll recall too, that when the president took office, radical Islamic terrorists had beheaded Americans and ISIS controlled a territory the size of Great Britain. Today, today because of the president’s determination and leadership, the ISIS caliphate is wiped out, it’s gone. It’s evil leader, Abu Bakr al-Baghdadi, is dead and our brave soldiers, they’re on their way home.

Mike Pompeo: (02:44)
The president exited the U.S. from the disastrous nuclear deal with Iran and squeezed the Ayatollah, Hezbollah, and Hamas. The president too moved the U.S. embassy to this very city of God, Jerusalem, the rightful capital of the Jewish homeland, and just two weeks ago, the president brokered a historic peace deal between Israel and the United Arab Emirates. This is a deal that our grandchildren will read about in their history books.

Mike Pompeo: (03:12)
You know, as a soldier, I saw firsthand people desperate to flee to freedom, the way of each of us can best ensure our freedoms is by electing leaders who don’t just talk, but who deliver. An American hostage, imprisoned in Turkey for two years, Pastor Andrew Brunson, said upon his release that he survived his ordeal with these words of scripture, “Be faithful, endure, and finish well.” If we stay the course, we will. May God ritually bless you and may God bless our great nation, the United States of America.