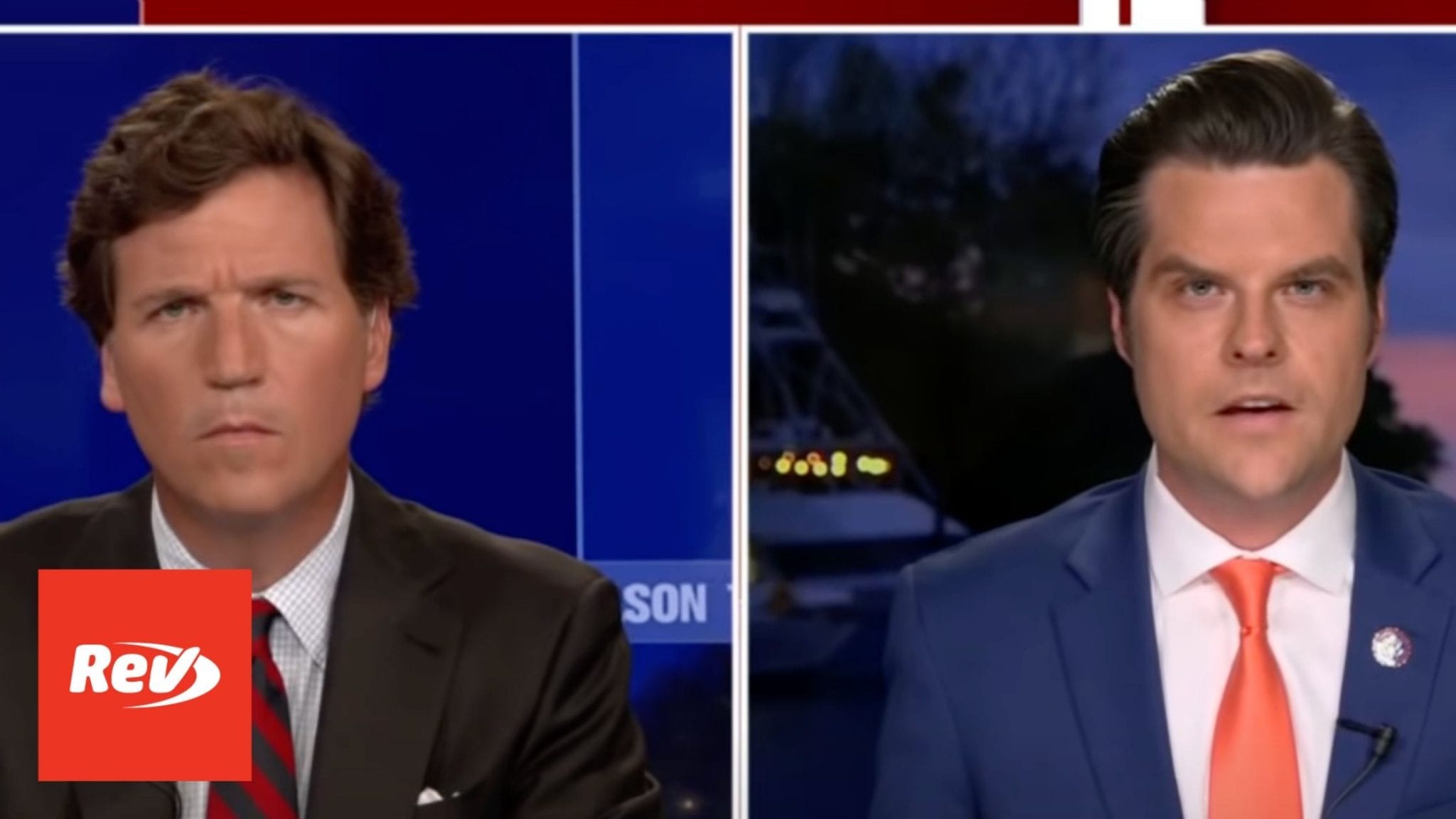 Rep. Matt Gaetz went on Tucker Carlson’s Fox News show on March 30 to respond to allegations of sex trafficking. The New York Times  reported that the Justice Department is investigating Gaetz “over whether he had a sexual relationship with a 17-year-old and paid for her to travel with him.” Gaetz denied the allegations and says there was an extortion attempt. Read the transcript here.

Tucker Carlson: (00:00)
Just a couple of hours ago, late this afternoon, the New York Times ran a story saying that Florida Congressman Matt Gaetz is under federal investigation for playing some role in sex trafficking and potentially having a relationship with a 17 year old girl. There are very few details in major news outlets tonight about this story. We have no background on at all and not even any very informed questions. Instead, we’ve invited Congressman Gaetz on the show to respond to these stories and give us his view of them. Congressman, thanks so much for coming on. Appreciate it. So, this is obviously a serious allegation. Tell us what the truth is from your perspective.

Matt Gaetz: (00:41)
It is a horrible allegation and it is a lie. The New York Times is running a story that I have traveled with a 17 year old woman and that is verifiably false. People can look at my travel records and see that that is not the case. What is happening is an extortion of me and my family involving a former Department of Justice official. On March 16th my father got a text message demanding a meeting, wherein a person demanded $25 million in exchange for making horrible sex trafficking allegations against me go away. Our family was so troubled by that we went to the local FBI and the FBI and the Department of Justice were so concerned about this attempted extortion of a member of Congress that they asked my dad to wear a wire, which he did with the former Department of Justice official. Tonight I am demanding that the Department of Justice and the FBI release the audio recordings that were made under their supervision and at their direction, which will prove my innocence.

Matt Gaetz: (01:44)
And that will show that these allegations aren’t true. They’re merely intended to try to bleed my family out of money. And this former Department of Justice official tomorrow was supposed to be contacted by my father, so that specific instructions could be given regarding the wiring of $4.5 million as a down payment on this bribe. I don’t think it’s a coincidence that tonight, somehow the New York Times is leaking this information, smearing me and ruining the investigation that would likely result in one of the former colleagues of the current DOJ being brought to justice for trying to extort me and my family.

Tucker Carlson: (02:25)
So, a couple of obvious questions that come to mind. And again, just to restate this just happened. Don’t have any other information beyond what we’ve already said and you have said. First of all, who is this Department of Justice former employee who’s trying to extort the money from you, you say?

Matt Gaetz: (02:39)
His name is David McGee. He was a top official in the leadership in the Northern district of Florida as a prosecutor. He currently works at the Beggs & Lane law firm. As a matter of fact, one of the recordings that was made at the FBI and Department of Justice request occurred at that law firm and the money that was supposed to be paid today, that would have shown even more evidence of David McGee’s work in this extortion scheme. That was foiled by the New York Times story and I believe that’s why this horrible information and these terrible allegations have been used this evening.

Tucker Carlson: (03:14)
So, I’ll get the investigation in a sec, but you’re saying that David McGee was motivated by greed. He was trying to extort money from your family. That’s his motivation you’re saying.

Matt Gaetz: (03:27)
I know that there was a demand for money in exchange for a commitment that he could make this investigation go away along with his co-conspirators. They even claim to have specific connections inside the Biden white house. Now, I don’t know if that’s true. They were promising that Joe Biden would pardon me. Obviously I don’t need a pardon. I’m not seeking a pardon. I’ve not done anything improper or wrong, but what I am troubled by is the real motivation for all of this. Just tonight Ted Lieu, a Democrat, is calling on me to be removed from the house judiciary committee. And I believe we are in an era of our politics now Tucker, where people are smeared to try to take them out of the conversation.

Matt Gaetz: (04:08)
I’m not the only person on screen right now who has been falsely accused of a terrible sex act. You were accused of something that you did not do. And so, you know what this feels like, the pain that can bring to your family and you know how it just puts people on defense when you’re accused of something, so salacious and awful. But it did not happen. It is not true. And the fact that it is the basis of this attempt to extort my family, tells a lot. And if the FBI and Department of Justice will release the tapes that they are in possession of, the American people will see what is really going on.

Tucker Carlson: (04:41)
You just referred to a mentally ill viewer who accused me of a sex crime 20 years ago. And of course it was not true, I’d never met the person. But I do agree with you that being accused falsely is one of the worst things that can happen. And you do see it a lot. Let’s go back to the investigation. You say that it was or is underway, there was an investigation. What is the basis of that investigation? What is the allegation? That really not very clear from these news stories?

Matt Gaetz: (05:10)
Yeah. Again I only know what I’ve read in the New York Times. I can say that actually you and I went to dinner about two years ago, your wife was there and I brought a friend of mine. You’ll remember her. And she was actually threatened by the FBI, told that if she wouldn’t cop to the fact that somehow I was involved in some pay for play scheme, that she could face trouble. And so, I do believe that there are people at the Department of Justice who are trying to smear me. Providing for flights and hotel rooms for people that you’re dating who are of legal age is not a crime. And I’m just troubled that the lack of any sort of legitimate investigation into me would then permute would then convert into this extortion attempt.

Tucker Carlson: (05:58)
I don’t remember the woman you’re speaking of or the context at all, honestly, but I would like to know who… So, they’re saying there is a 17 year old girl who you had a relationship with. Is that true? And who is this girl? What are they talking about the New York Times?

Matt Gaetz: (06:14)
The person doesn’t exist. I have not had a relationship with a 17 year old. That is totally false. The allegation I read in the New York Times is that I’ve traveled with some 17 year old in some relationship. That is false and records will bear that out to be false.

Tucker Carlson: (06:30)
How long has this investigation been going on? Do you know?

Matt Gaetz: (06:39)
Again, I really saw this as a deeply troubling challenge for my family on March 16th when people were talking about a minor and that there were pictures of me with child prostitutes. That’s obviously false. There will be no such pictures because no such thing happened. But really on March 16th was when this got going from the extortion standpoint.

Tucker Carlson: (07:05)
So, what happens next? I mean you can see there is this investigation, I guess a criminal investigation. I’m not quite sure what the sex trafficking part comes in. I don’t again for the fifth time, I don’t really understand this story very well. But where does it go from here? I mean you’ve made an allegation against someone by name on the air and accused him of trying to extort millions of dollars from your family. What what happens tomorrow?

Matt Gaetz: (07:28)
Well what was supposed to happen was the transfer of this money that would have implicated the former colleague of these current DOJ officials. But that’s obviously not going to happen tomorrow because the New York Times story was leaked in order to quell that investigative effort. So, here’s what needs to happen next. The FBI and the Department of Justice must release the tapes that are in their possession, that were done at their direction. Those tapes will show that I am innocent and that the whole concept of sex charges against me was really just a way to try to bleed my family out of money and probably smear my name because I am a well-known outspoken, conservative, and I guess that’s out of style in a lot of parts of the country right now.

Tucker Carlson: (08:12)
Matt Gaetz, I appreciate your coming on tonight.

Matt Gaetz: (08:14)
Thanks for giving me the chance to tell the truth. I appreciate it.

Tucker Carlson: (08:17)
It’s a more interesting and complicated story than that I knew from reading about it. Thank you very much. Matt Gaetz interview, that was one of the weirdest interviews I’ve ever conducted. That story just appeared in the news a couple of hours ago and on the certainty that there’s always more than you read in the newspaper we immediately called Matt Gaetz and asked him to come on and tell us more, which is you saw he did. I don’t think that clarified much but it certainly showed this as a deeply interesting story and we’ll be following it. Don’t quite understand it but we’ll bring you more when we find out.