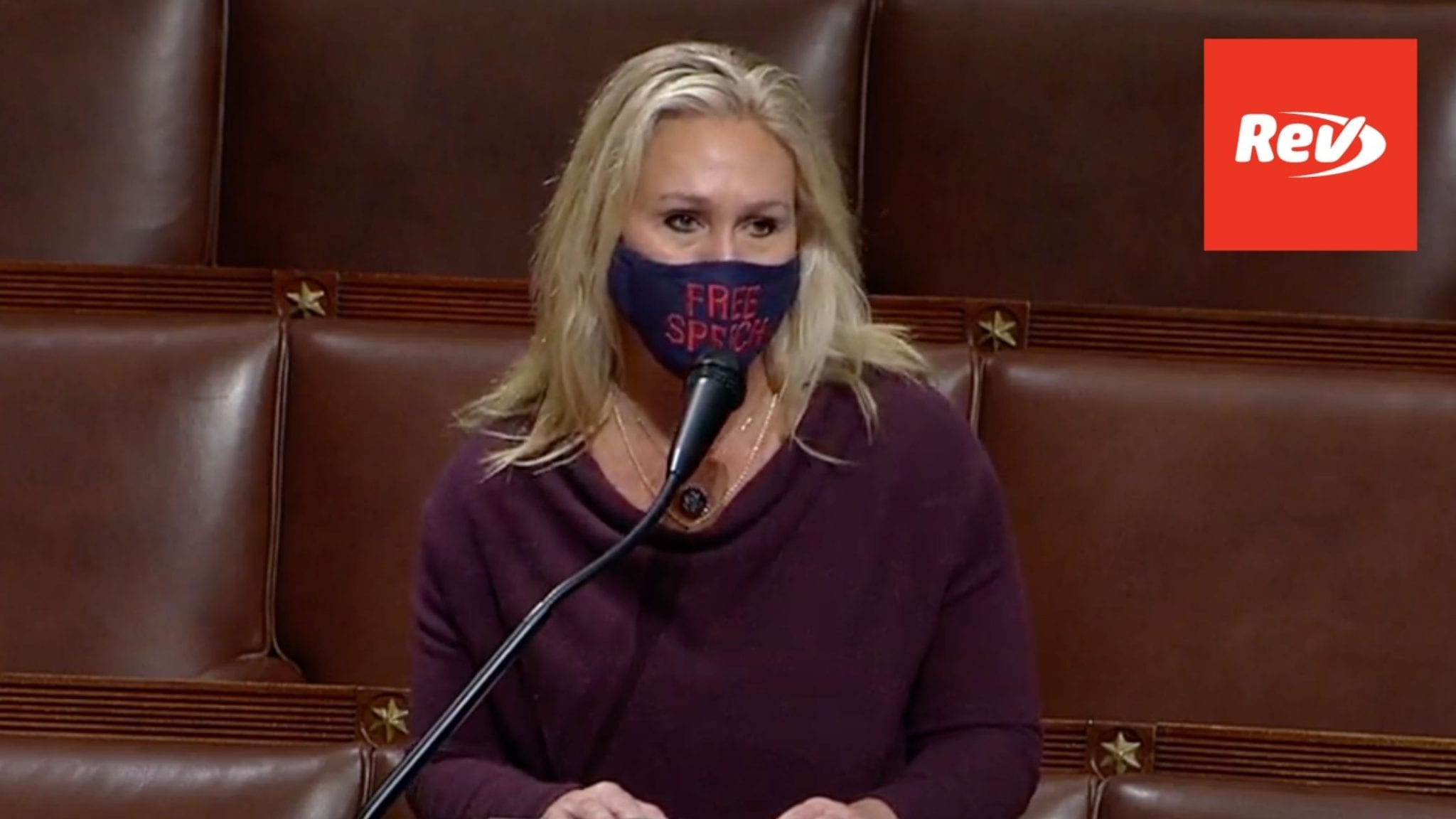 Rep. Marjorie Taylor Greene spoke on the House floor on February 4, 2021 leading up to a vote to remove Greene from her committee assignments. Read the full transcript of her remarks here.

Marjorie Taylor Greene: (00:00)
Madam speaker, my Democrat colleagues, Republican colleagues, my district back home and Georgia 14, to the American people, to my mom and dad and my husband and my children. I’ve been here for one month and a day and I’ve gotten to know part of my conference, my Republican colleagues, but not even all of them yet. I haven’t gotten to know any of my Democrat colleagues and I haven’t had to had have any conversations with any of you to tell you who I am and what I’m about. You only know me by how media matters, CNN, MSNBC, and the rest of the mainstream media is portraying me. What you don’t know about me is that I’m a very proud wife of almost 25 years, that I’m a mother of three children and I consider being a mother the greatest blessing of my life and the greatest thing that I’ll ever achieve. I’m proudly the first person to graduate college in my family, making my parents very happy and proud.

Marjorie Taylor Greene: (01:06)
I’m also a very successful business owner. We’ve grown our company from one State to 11 States. I’m a very hard worker. I’ve always paid my taxes. I’ve never been arrested. I’ve never done drugs, but I’ve gotten a few speeding tickets in my day. What you need to know about me is I’m a very regular American, just like the people I represent in my district. And most people across the country, I never, ever considered to run for Congress or even get involved in politics. As a matter of fact, I wasn’t a political person until I found a candidate that I really liked and his name is Donald J. Trump when he ran for President. To me, he was someone I could relate to, someone that I enjoyed his plain talk, not the offensive things, but just the way he talked normally. And I thought, “Finally, maybe this is someone that will do something about the things that deeply bother me.”

Marjorie Taylor Greene: (02:06)
Like the fact that we’re so deeply in debt, that our country has murdered over 62 million people in the womb. The fact that our borders are open and some of my friends have had their children murdered by illegal aliens, or perhaps that maybe we can stop sending our sons and daughters to fight in foreign Wars and be used as the world’s police basically. Or maybe that our government would stand up for our American businesses and our American jobs and make the American people and the American taxpayers, their focus. These are the things that I care about deeply. So when we elected President Trump, and then I started seeing things in the news that didn’t make sense to me like Russian collusion, which are conspiracy theories also, and have been proven so, these things bothered me deeply, and I realized just watching CNN or Fox news, I may not find the truth.

Marjorie Taylor Greene: (03:07)
And so, what I did is I started looking up things on the internet, asking questions, like most people do every day, use Google. And I stumbled across something and this was at the end of 2017 called Anon. Well, these posts were mainly about this Russian collusion information. A lot of it was some of what I would see on the news at night and I got very interested in it, so I posted about it on Facebook. I read about it, I talked about it. I asked questions about it, and then more information came from it. But you see, here’s the problem, throughout 2018, because I was upset about things and didn’t trust the government, really because the people here weren’t doing the things that I thought they should be doing for us, the things that I just told you I cared about. And I want you to know a lot of Americans don’t trust our government and that’s sad.

Marjorie Taylor Greene: (04:03)
The problem with that is though is I was allowed to believe things that weren’t true and I would ask questions about them and talk about them. And that is absolutely what I regret, because if it weren’t for the Facebook posts and comments that I liked in 2018, I wouldn’t be standing here today and you couldn’t point a finger and accuse me of anything wrong because I’ve lived a very good life that I’m proud of. My family’s proud of, my husband’s proud of, my children are proud of and my that’s what my district elected me for. So later in 2018, when I started finding misinformation, lies, things that were not true in these Qanon posts, I stopped believing it. And I want to tell you, any source, and I say this to everyone, any source of information that is a mix of truth and a mix of lies is dangerous no matter what it is saying, what party it is helping, anything or any country it’s about, it’s dangerous.

Marjorie Taylor Greene: (05:05)
And these are the things that happen on the left and the right and it is a true problem in our country. So I walked away from those things and I decided I’m going to do what I’ve done all my life, I’m going to work hard and try to solve the problems that I’m upset about. So I started getting involved in politics. You see, school shootings are absolutely real. And every child that has lost those families mourn it. I understand how terrible it is because when I was 16 years old in 11th grade, my school was a gun free school zone. And one of my school mates brought guns to school and took our entire school hostage and that happened right down the hall from my classroom. I know the fear that David Hogg had that day, I know the fear that these kids have, and this is why and I say this sincerely with all my heart, because I love our kids, every single one of your children, all of our children.

Marjorie Taylor Greene: (06:04)
I truly believe that children at school should never be left unprotected. I believe they should be just as protected as we were with 30,000 national guardsmen. Our children are our future and they’re our most precious resource. I also want to tell you, 9/11 absolutely happened. I remember that day, crying all day long and watching it on the news and it’s a tragedy for anyone to say it didn’t happen. And so, that I definitely want to tell you, I do not believe that it’s fake. I also want to tell you that we’ve got to do better. You see, big media companies can take teeny tiny pieces of words that I’ve said, that you have said, any of us and can portray us and to someone that we’re not, and that is wrong. Cancel culture is a real thing. It is very real. And when big tech companies like Twitter, you can scroll through and see where someone may have retweeted porn. This is a problem.

Marjorie Taylor Greene: (07:09)
This is a terrible, terrible thing. But yet when I say that I absolutely believe with all my heart that God’s creation is he created them male and female and that should not be denied, when I am censored for saying those types of things that is wrong. You see, here’s the real situation. I decided to run for Congress because I wanted to help our country, I want Americans to have our American dream. I want to protect our freedoms. This is what I ran for Congress on. I never once said during my entire campaign, QAnon. I never once said any of the things that I am being accused of today during my campaign. I never said any of these things since I have been elected for Congress. These were words of the past and these things do not represent me. They do not represent my district and they do not represent my values.

Marjorie Taylor Greene: (08:09)
Here’s what I can tell you. I am beyond grateful for this opportunity and I’ll tell you why. I believe in God with all my heart and I’m so grateful to be humbled, to be reminded that I’m a sinner and that Jesus died on the cross to forgive me for my sins. And this is something that I absolutely rejoice in today to tell you all and I think it’s important for all of us to remember none of us are perfect, none of us are. And none of us can even come close to earning our way into heaven just by our acts and our works but it’s only through the grace of God. And this is why I will tell you as a member of this Congress, the 117th Congress, I am a passionate, I’m a competitor, I’m a fighter. I will work with you for good things for the people of this country but the things I will not stand for is abortion. I think it’s the worst thing this country has ever committed.

Marjorie Taylor Greene: (09:11)
And if we’re to say in God we trust, how do we murder God’s creation in the womb? Another thing I will say to this body is I want to work with all of you for our people. It should be America first, always, always and there’s nothing wrong with that. And if this Congress is to tolerate members that condone riots that have hurt American people, attack police officers, occupied federal property, burned businesses and cities, but yet wants to condemn me and crucify me in the public square for words that I said, and I regret a few years ago, then I think we’re in a real big problem, a very big problem. What shall we do as Americans? Shall we stay divided like this? We allow the media that is just as guilty as QAnon of presenting truth and lies to divide us? Will we allow ourselves to be addicted to hate and hating one another? I hope not because that’s not the future I want for my children and it’s not the future I want for any of your children. I yield back my time. Thank you.