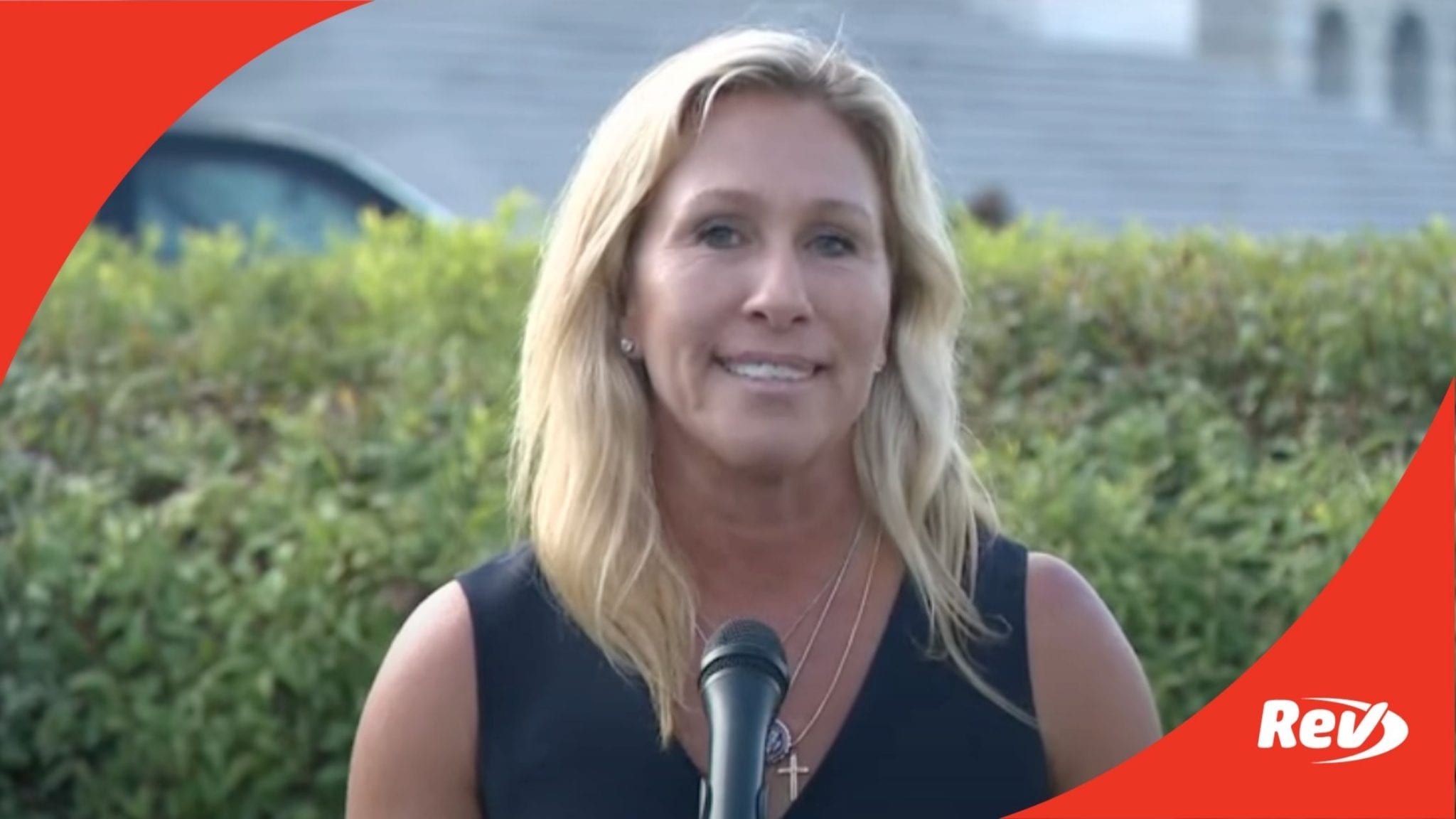 Following her trip to the Holocaust Museum on June 14, 2021, Rep. Marjorie Taylor Green apologized for comparing mask mandates to the Holocaust. Read the full transcript of her statement & apology here.

Marjorie Taylor Greene: (00:00)
…kinds of people, children, people that the Nazis didn’t believe were good enough or perfect enough and the horrors of the Holocaust or something that some people don’t even believe happened. And some people deny, but there is no comparison to the Holocaust. And there are words that I have said and remarks that I’ve made that I know are offensive. And for that, I want to apologize. And I am just fine and very glad to be able to come out here and do that, because I believe it’s important. I believe that if we’re going to lead, we need to be able to lead in a way where if we’ve messed up, it’s very important for us to say we’re sorry. And that’s why I wanted to come and talk to you all today, because I wanted to say that I know that words that I’ve stated were hurtful.

Marjorie Taylor Greene: (00:56)
And for that, I am very sorry. Over the past few weeks, we have seen Jewish Americans be attacked in our city streets. And we’ve seen it on video. We’ve seen the reports, and these are things that should never happen to any American for their religion or identity. This is, this is such a wonderful country, and hate should never exist between us. And I really hope that that’s something that we can all come together on. I’m also a mom, and I always think about America as our home. And it’s the place for all of us. It’s the place where we raise our children, where we enjoy our wonderful lives. It’s the place where we work, maybe own businesses, get an education, where we have fun, where we do just everything in life. And we’re able to do that here in our country.

Marjorie Taylor Greene: (01:58)
And I think the great thing that we can all say is that we all want a wonderful home here in America, no matter what our politics are. And I’m taking off my political hat right now. No matter who we are, we want our home to be the best home for all of us. And hate does not belong in a good home. Hate makes a terrible home. And that’s something that I reject, and antisemitism is true hate. And I saw that today at the Holocaust museum. And I think it’s something that we should all remember and never forget. So I just wanted to come here today and say that I’m truly sorry for offending people with remarks about the Holocaust. There’s no comparison. There never, ever will be. And so with that, I’ll wrap up and take a few questions. Yes?

Speaker 2: (02:53)
Congresswoman, why did it take this long to come around? Is it only because Democrats are now threatening [inaudible 00:02:57] resolutions this week against you? What was it that made you get to this point?

Marjorie Taylor Greene: (03:05)
Oh no, we haven’t been in session, so I haven’t been here for, I think it’s three… We’re three weeks. So just coming back in town today, and today’s the first day. I flew in this morning, actually. And so I went this afternoon.

Speaker 3: (03:20)
Why did you decide to go today? You’ve had years to go to the Holocaust museum. And do you repudiate President Trump referring to good people among the American Nazi party?

Marjorie Taylor Greene: (03:35)
Actually, I visited Auschwitz when I was 19 years old. And so it isn’t like I learned about it today. I went today because I thought it’s important, and I know that I wanted to recognize it and be able to talk about it coming out here with my apology. Yes?

Speaker 4: (04:00)
Do you think Rep. Omar should be removed from House Foreign Affairs after her comments last week comparing the US and Israel with the Taliban and Hamas?

Marjorie Taylor Greene: (04:11)
I think those are unbelievably insulting statements to our American military and to the Israeli military. There is no comparison between our American military and Israeli military, to the Taliban or any other terrorist organization. And it was good to see members of her own party call her out on that, and I don’t think that that’s the type of views. And it’s not just that, it’s more than just her statements about the military. It’s also been words from the entire squad that have brought hate and maybe encouraged attacks on Jewish Americans.

Speaker 5: (04:55)
Congressman, what specifically, did you learn at the Holocaust museum today? Because there were multiple opportunities for you to clarify your remarks, and you doubled down on them. And you suggested that the comparisons of the mask mandates were similar to Jews being rounded up during this period of time. What at the Holocaust museum kind of enlightened you to why those comments weren’t necessarily correct?

Marjorie Taylor Greene: (05:17)
Well, going to the Holocaust museum was just a good reflection, and it was good to look and see things there. And one of the things I was reminded of is how terrible their policies were. Discrimination and hate were unbelievably horrible, horrible policies. And we saw that in Nazi Germany, and you can see it if you visit the Holocaust museum. Again, it’s not something I was unfamiliar with, but I wanted to go there today because it’s important to remember. We live in a time where it’s hard to imagine that there are people that believe it didn’t even happen. And history is our wonderful lessons. We have to remember these things, even if they’re hard to look at, if they’re painful to look at. And it is very painful to go and see those images, and read about it, and talk to people about it. It is painful, but it’s important to remember because that’s the kind of thing we never want to happen again. And that’s why I went there today.

Speaker 5: (06:24)
Well, denying the Holocaust is some of the rhetoric that’s often spread among QAnon supporters. And I know that you’ve attempted to distance yourself from some of the people that espouse those beliefs. But are you concerned that Q, in particular, spreads a lot of disinformation, not just about Jewish people.

Speaker 6: (06:52)
So obviously, you prepared mask mandates to yellow stars the Jews wore during the Holocaust. You said that the Democratic party is national socialist party, like the Nazi party was. Do you not think those things that you said?

Marjorie Taylor Greene: (07:06)
I believe that forced mask and forced vaccines or vaccine passports are a type of discrimination, and I’m very much against that type of discrimination. What I would like to say is, I’m removing that statement completely away from what I had said before. No, I just want to say, there is no comparison to the Holocaust and there never should be. And that’s what I’m sorry for. Yes, ma’am?

Speaker 7: (07:40)
So to circle back, President Trump had said there was very fine people in Charlottesville, people who said, “Jews will not replace us.” So do you repudiate those remarks spoken by the former president, that those were very fine people.

Marjorie Taylor Greene: (07:49)
This isn’t about President Trump, and I really don’t know anything about those remarks.

Speaker 8: (07:55)
You, admittedly, I’m sure you know you’re a bit of a firebrand. You said that you realized some of the things you said here hurt people. Will that change the way you approach comments in the future?

Marjorie Taylor Greene: (08:08)
Yeah, I think it’s good to learn lessons, but you’re always going to see me being very real with my thoughts. I think what’s more important is I want to show people it’s about actions. It’s one thing to say words, but it’s to follow through with actions. And what I can say is, you’ll see me follow through with actions. That’s why I’m here today to do this, because I believe this is an action that’s important, and it’s sincere. And so I’m willing to come out here and do it. It’s not easy to come out here amongst the press. Often times, you guys are pretty rough on me, but I’m trying to be very humble, and I’m contrite. And I think it’s important. So that’s why I’m doing this today. I can take one more question, and then we can go vote. Yes?

Speaker 9: (09:04)
Just in terms of, after your visit to the Holocaust museum today, earlier during recess, you compared Democrats to the national socialist party. Is that something you still stand by after you’ve reflected on [inaudible 00:09:15]?

Marjorie Taylor Greene: (09:16)
Socialism is extremely dangerous, and so is communism. And any time a government moves into policies where there’s more control, and there’s freedoms taken away, yes, that’s a danger for everyone. And I think that’s something that we should all be wary of. Anytime that you have things like censorship with social media, anytime where we have things being taught, where one race is being told it’s racist, like critical race theory, those are problems. These are things that we’re seeing in policies coming out of the Democrat party that I think are dangerous for everyone. And that’s why I’m against them. And I’ll never stop saying I’m very much on track, and I’ll never stop saying we have to save America and stop socialism. There’s no veteran that signed up to serve in the military, and there’s nobody that fought for our country, because they wanted America to be a socialist country. They all did it because they wanted America to be a free country. So that’s the important thing to remember. Thank you guys so much. I got to head up to vote. Thank you.