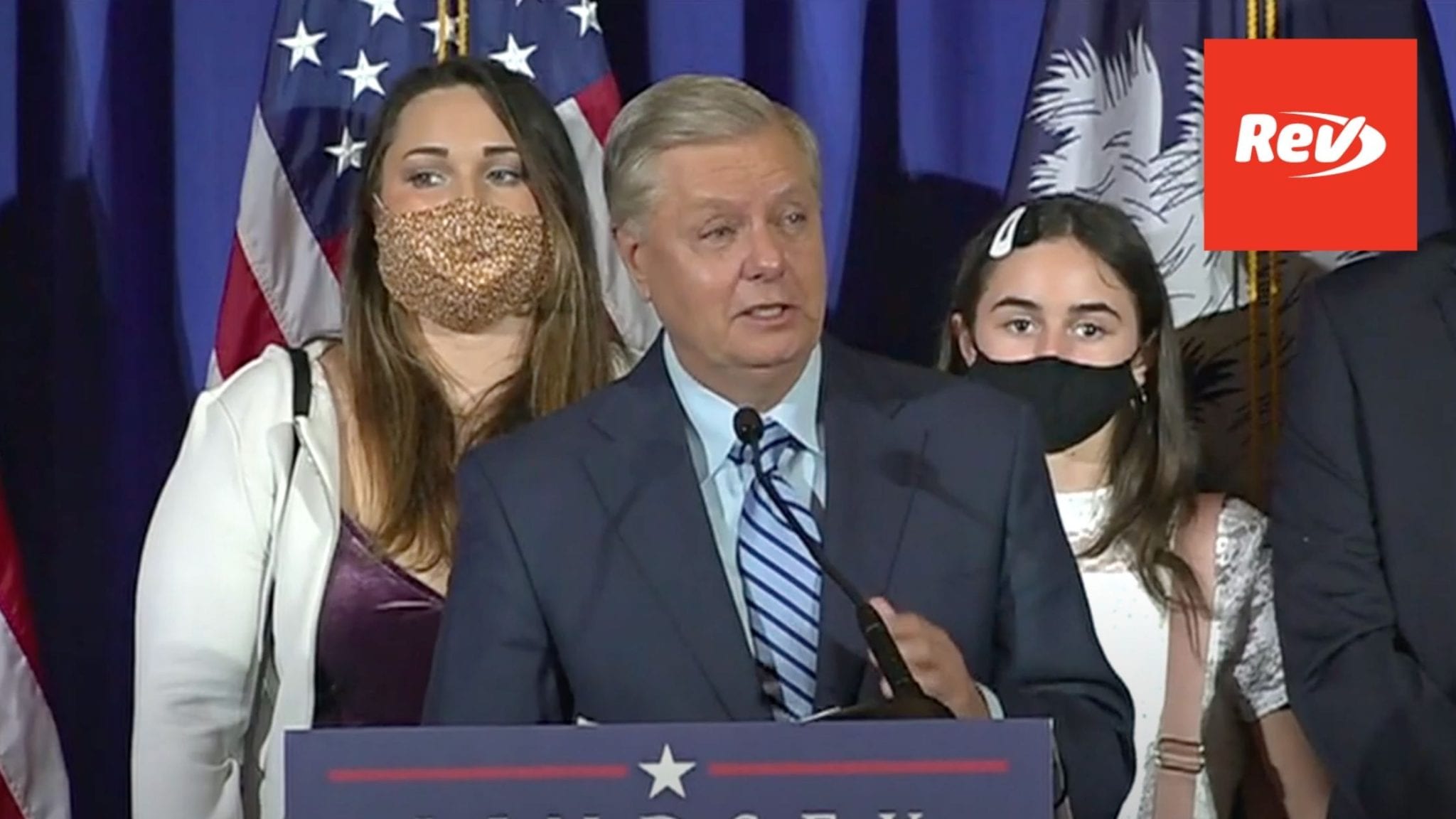 Lindsey Graham gave a victory speech after winning his 2020 senate race against Jaime Harrison in South Carolina. Read the full transcript of his speech here.

Lindsey Graham: (00:33)
Thank you, South Carolina. We did it. I don’t mean me, I mean we. To borrow a phrase from Churchill, come on up, guys. We’ll talk with these folks here in a second. To borrow a phrase from … I owe so much to so many, not just in South Carolina, throughout the country … Victory is an answer to a lot of prayers. Everybody that prayed for me also voted for me and then some. To those who have been following the race, I hope you got the message.

Lindsey Graham: (02:05)
Here’s what we’re going to do. We’re going to put our national security interests ahead of … nothing else matters. Isn’t that right, Joe? To the men and women in uniform, I will continue to have your back because you got all of ours. It is my goal and my desire to make sure that we have the best prepared military to deter war, but if we get in it, we’re going to win it.

Lindsey Graham: (02:33)
To the people in Austria, Vienna, my heart breaks for you. To the rest of America who may be watching briefly here, radical Islam is not dead and buried. They have been hit hard, but this is not over. I will never ever take my eye off the ball. No more 9/11s.

Lindsey Graham: (02:54)
The other purpose I have is to make sure that every conservative in South Carolina understands this: I will do everything I can to stop the radical agenda coming from Nancy Pelosi’s House. Speaker Pelosi, if you enact the agenda you’re talking about, we’re going to bury it in the Senate because it’s bad for America.

Lindsey Graham: (03:50)
I’ve had two calls already. One from President Trump. He’s going to win. He is going to win. To all the pollsters, you have no idea what you’re doing. To all the liberals in California and New York, you wasted a lot of money.

Lindsey Graham: (04:10)
This is the worst return on investment in the history of American politics. I got a call from Mr. Harrison, Jaime, thank you. He was very gracious. He created a incredible campaign for the first time he’s ever run for office. He raised more money than the history … than anybody in the history of the United States Senate I think had a lot to do with that, but Jaime, I appreciate the phone call. I will do my … You’re a good father. You’re a good … You’re a good man. I look forward to working with you where I can. Congratulations to all the people who worked on your behalf.

Lindsey Graham: (05:02)
Now, this is the thank you time. I’ll try to not keep us here forever. I’ve got so many people to thank from the day I got in this business until now. I am the least self-made man in politics. Governor … where we went. The Lieutenant Governor, and we just were a great team. But I’m going to start with my family behind me. Thank you, darling. Thank you very much, sweetheart.

Lindsey Graham: (05:41)
Your ad made me cry. That’s about the only ad that I would watch, but I couldn’t get through that one. Larry and Emily and Nicole, you have my heart. To my Aunt Verna Mae and Nell who can’t be with this, thinking about y’all. To the Ball family, you’re very much my family. This journey started in House District Two in 1992, where Denise ran my first campaign. We put the kids in a wagon with Greg and we knocked on doors. Damn, if we didn’t win. Everything has just been an incredible ride since. Without what you did for me then, in my first Congressional race, in my first Senate race, there would be no Lindsey Graham. So thank you all very much.

Lindsey Graham: (06:30)
… the best campaign manager in the United States.

Lindsey Graham: (06:51)
… campaign manager. He’s a better father. He’s a better husband. He’s a better friend. I have the best campaign in the history of South Carolina. It is wide and it is deep, and if you take us on you better get up early and you better stay late. $130 million is not enough. [inaudible 00:07:22] who did the ads … We had a really … our seasoned team just delivered it in every way possible. Our communication, TW and Toby, thank you. Y’all were incredible. I know a lot more about the digital world than I used to. I felt we competed well in every aspect of it.

Lindsey Graham: (07:53)
It was just a wide and deep … I just can’t thank you all enough. Team Graham is just a joy to to be part … Tara, thank you for raising $108 million and counting. Lindseygraham.com. 2026 will be here before you know it. To the South Carolina Republican Party, Drew, y’all really knocked it out of the park for all of us. To the victory team, it’s the best running victory operation in the history of the state. To the state House and state Senate candidates who sent out videos for me, thank you. This is a team sport, and we’re doing well in South Carolina tonight.

Lindsey Graham: (08:47)
To my Congressional colleagues and patriots, we have the best … I can’t thank you enough. Let’s start with the Dean. Joe Wilson, you’re a great man. Thank you so much for being my friend. Congratulations to you. Nobody works harder. He loves the military. If you want a key chain, tonight is the night. William Timmons, thank you for all you did in the Greenville/Spartanburg area. You’re terrific. You have a bright future. To Jeff Duncan, you won the cyber war all by … Jeff enjoyed my campaign more than I did … A joy to work with. Thank you all so, so, so much. We just have so much to be grateful for in this state. We have great representation. Nancy Mace is going to win before this night’s over with.

Lindsey Graham: (09:53)
The bottom line is, this is a team sport. I am lucky to have the support I have. It is wide and it is deep. To all who prayed for me, I felt it. But let me say, when Nikki came forward, I appreciated the heck out of it. Thank you, Nikki Haley. Here’s a quick Nikki story. Her mom and dad sent an absentee ballot. They never got acknowledgement it was received. They made Michael get in the car, drive from Charleston to Richland. They’re 84 and 87. They stood in line two hours to vote for me. That’s a heck of a story. To the Haley family, thank you. To Tim Scott, you’re the best partner anybody could have in the United States Senate.

Lindsey Graham: (10:44)
Tonight, the 2020 race for Senator Scott begins. Timscott.com. Tim Scott … Tim is a national treasure and a blessing to the Republican party and to all who know him. The job is to be a Senator, right, not to just run a campaign. I think I am the most blessed man on Capitol Hill. I have the best Senate staff of anybody in the country. Richard, wherever you may be, you’ve been with me since day one. You’ve been a heck of a chief of staff. Strom Thurmond told me something that sticks with me to this day. You’ll take care of people, they’ll take care of you. We take care of people. We treat every constituent like a customer. Matt, all of you, Van, the constituent service in this state is second to none. We give you an answer. It’s not the answer maybe you want sometimes, but we try to give you a good honest answer. We go to bat for you, and we work hard.

Lindsey Graham: (11:54)
All I can say is this had been overwhelming. I’ve never been challenged like this. I’ve never had more support than I do tonight. There are people all over this country came to my aid. There are people who had never given 15 cents, gave me what they could. Ted Cruz’s mother sent me $30. Ted said he never gave her anything. I cannot tell you how touching it is and how humbled I am to have over two million people want to invest in my campaign, Pam. This has just been an incredible experience. God works in the most mysterious ways, doesn’t He? I never saw this coming, did you?

Lindsey Graham: (12:45)
I never believed that we would be the center of attention for the Senate races in the entire nation. I think it had a lot to do with just being at the right place at the right time, but more than anything … to speak up for. The Republicans who came out in droves for me, I will not let you down. I will be there for the conservative cause. I’m proudly pro-life. I will protect our rights under the Second Amendment. I will do my part to keep confirming judges. To my Democratic opponents and challengers and friends, if you want to meet in the middle, I’ll be there on the issues that we all need to be working together, like infrastructure. We all have the same needs for roads and bridges and ports, right? We got a great country. Let’s make sure it stays great.

Lindsey Graham: (13:49)
We got a mountain of debt. There’s no way for the Republican party to get the country out of debt … Have to work together like Ronald Reagan did and Tip O’Neill. I may be the budget chairman. It looks like we’re going to hold the Senate. I promise my Democratic colleagues that if you’ll work with me, I’ll work with you, because the debt is going to ruin the country. I just want to remind everybody whatever differences we have, they pale in comparison to what we believe in, which is the right to pick our leaders … From one election and go to the next. I’ve been to Iraq and Afghanistan 50-something times. I can tell you, there are people out there that hate Chuck Schumer just as much as Lindsey Graham. That’s hard to believe, isn’t it?

Lindsey Graham: (14:40)
But radical Islamists don’t see as Republicans or Democrats. They see as infidels. They would kill us all regardless of our faith, whether you’re Christian, Jewish, Muslim, Libertarian, vegetarian. I’ve never lost sight that when you go overseas you realize that so many people believe in us maybe more than we believe in ourselves. What I’m going to do is take the spirit of this win and harness it and do the best I can as long … These terms are for six years, but I learned something early on with Darlene. There is no promised tomorrow. God determines how much longer I’ve got. Here’s my promise to you. Every day that He gives me, I’m going to … you and our country. I believe this with all my heart and soul when it comes to Lindsey Graham … is yet to come. God bless you.