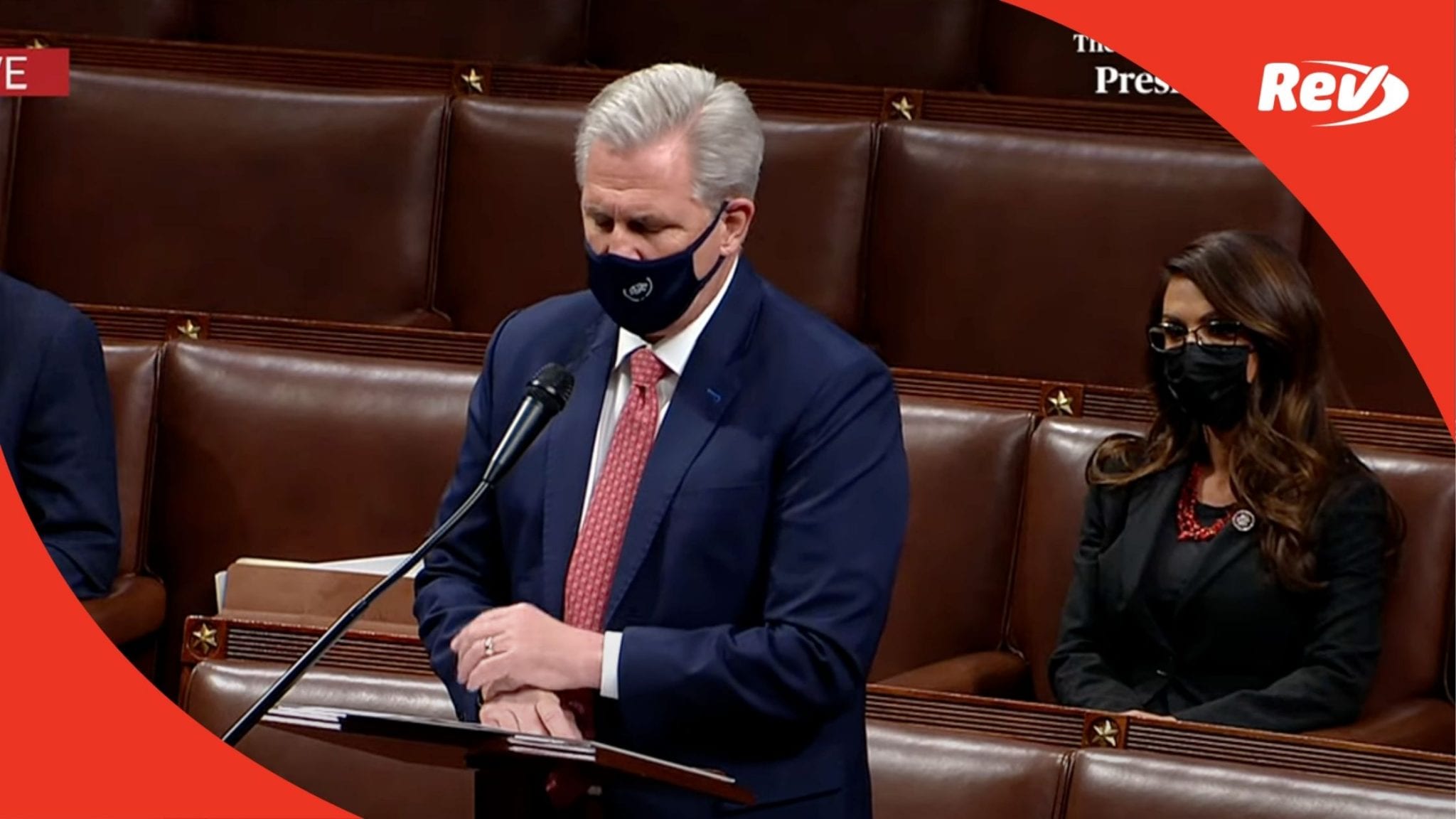 House Minority Leader Kevin McCarthy gave a speech on the House floor as the House of Representatives debated the second impeachment of President Donald Trump on January 13.

Madam Speaker: (00:00)
The gentleman from California is recognized for one minute.

Kevin McCarthy: (00:04)
Thank you, gentleman, for yielding. Madam Speaker, let me be clear, last week’s violent attack on the Capitol was undemocratic, un-American and criminal. Violence is never a legitimate form of protest. Freedom of speech and assembly under the constitution is rooted in non-violence. Yet the violent mob that descended upon this body was neither peaceful nor democratic. It acted to disrupt Congress’s constitutional responsibility.

Kevin McCarthy: (00:41)
It was also an attack on the people who work in this institution, members, staff, and the hundreds who work behind the scenes so that we can serve the American people. The greatest statesman in the history of our country understood that the most dangerous threat to freedom is lawlessness. A young lawyer named Abraham Lincoln famously said, “There is no grievance that is a fit object of redress by mob law.” Yet for several hours last week, mob law tried to interfere with constitutional law.

Kevin McCarthy: (01:26)
Some say the riots were caused by Antifa. There was absolutely no evidence of that. And conservatives should be the first to say so. Conservatives also know that the only thing that stops mob violence is to meet it with force rooted in justice and backed by moral courage. And last week we saw mob violence met by courage, sacrifice and heroism from the brave men and women who protect this institution every day. But for the bravery of the Capitol police, the destruction and loss could have been much greater. We owe them a tremendous debt of gratitude.

Kevin McCarthy: (02:10)
The loss of officer Brian Sicknick and officer Howard Liebengood is tragic and heartbreaking. We mourn their loss, remember their lives and continue to pray for their families and loved ones. The officers of the Capitol police deserve our eternal thanks. We will never forget the dangers they faced, the determination they showed or the sacrifices they made. And make no mistake, those who are responsible for Wednesday’s chaos will be brought to justice, which brings me to today’s debate. I believe impeaching the President in such a short timeframe would be a mistake.

Kevin McCarthy: (03:00)
No investigations have been completed. No hearings have been held. What’s more, the Senate has confirmed that no trial will begin until after President elect Biden is sworn in, but here is what a vote to impeach would do. A vote to impeach would further divide this nation. A vote to impeach will further fan the flames of partisan division. Most Americans want neither inaction nor retribution. They want durable, bi-partisan justice. That path is still available, but is not the path we are on today.

Kevin McCarthy: (03:46)
That doesn’t mean the President is free from fault. The President bears responsibility for Wednesday’s attack on Congress by mob rioters. He should have immediately denounced the mob when he saw what was unfolding. These facts require immediate action by President Trump, accept his share of responsibility, quell the brewing unrest and ensure President elect Biden is able to successfully begin his term. The President’s immediate action also deserves congressional action, which is why I think a fact finding commission and a censure resolution would be prudent. Unfortunately, that is not where we are today.

Kevin McCarthy: (04:30)
Truly, this past week was one of the most difficult for Congress and our nation. Of all the days here, last Wednesday was the worst day I’ve ever seen in Congress. Our country is deeply hurt. So where do we go from here? After all the violence and chaos of the last week, it is important to remember that we’re still here to deliver a better future for all Americans. It does not matter if you are liberal, moderate, or conservative. All of us must resist the temptation of further polarization.

Kevin McCarthy: (05:09)
Instead, we must unite once again as Americans. I understand for some this call for unity may ring hollow, but times like these are when we must remember who we are as Americans and what we as a nation stand for. And as history shows, unity is not an option. It’s a necessity. It is as necessary today as it was at the start of our country.

Kevin McCarthy: (05:39)
I want us all to think back to how John Adams and the Federalist party handed power over to Thomas Jefferson and his party after the election of 1800. That election, and indeed that error was one of the most divisive ever. Partisans used every dirty trick in the book. They demonized each other, dismissed reasonable descent and described their opponents as seditious. Sound familiar? The election of 1800 could have destroyed our young nation, but instead of breaking us, it helped us bring us together, thereby preserving the world’s last best hope of freedom.

Kevin McCarthy: (06:27)
After a hard fought battle over the electoral college in Congress, Adam’s conceded, and a peaceful transfer of power, the first in American history took place. Jefferson, for his part, put aside the division of the era and preached forgiveness. Yes, unity. In his first inaugural address he famously said, “Every difference of opinion is not a difference of principle.” Jefferson and Adams did not end every difference of opinion that existed in America, nor did they try.

Kevin McCarthy: (07:06)
In a free country as big and diverse as ours, that would be impossible. What they did was more important. They recognized the deeper unity, a unity rooted in the famous proposition both men helped to write. At a critical moment in history, our founder’s chose peace, liberty, partnership, over tension, division and partisanship. For the sake of our country, we must make the exact same choice.

Kevin McCarthy: (07:39)
We have already begun. Last week, despite the lingering shock and amid the windows still broken, we did what all healthy democracies do. We debated, and we voted. In this country, we solve our disputes at the ballot box and through debates and votes on the floor of this exact chamber. We did our duty then, and we must do more.

Kevin McCarthy: (08:09)
The eyes of the nation and the world are upon us. We must seize this opportunity and heal and grow stronger. As leaders, our place in history depends on whether we call on our better angels and refocus our efforts to work directly for the American people. United we can deliver peace, strength and prosperity our country desperately needs. Divided we will fail.

Kevin McCarthy: (08:39)
What we saw last week was not the American way. Neither is the continued rhetoric that Joe Biden is not the legitimate President. Let’s be clear. Joe Biden will be sworn in as President of the United States in one week because he won the election, and the Presidency in this Congress will face immediate challenges that must be addressed. I stand ready to assist in that effort with good faith, goodwill and an open hand.

Kevin McCarthy: (09:10)
The United States remains exceptional. We remain extraordinary. In the coming weeks and months, we must work together, all of us to recharge the light of our shining city on the hill. History has shown us away. History has given us a path. Just as Adams and Jefferson has shown, now is the moment that we should do the exact same. In these trying times, may God continue to bless America and let’s chart a course that history will repeat, but not what’s happening today. I yield back.