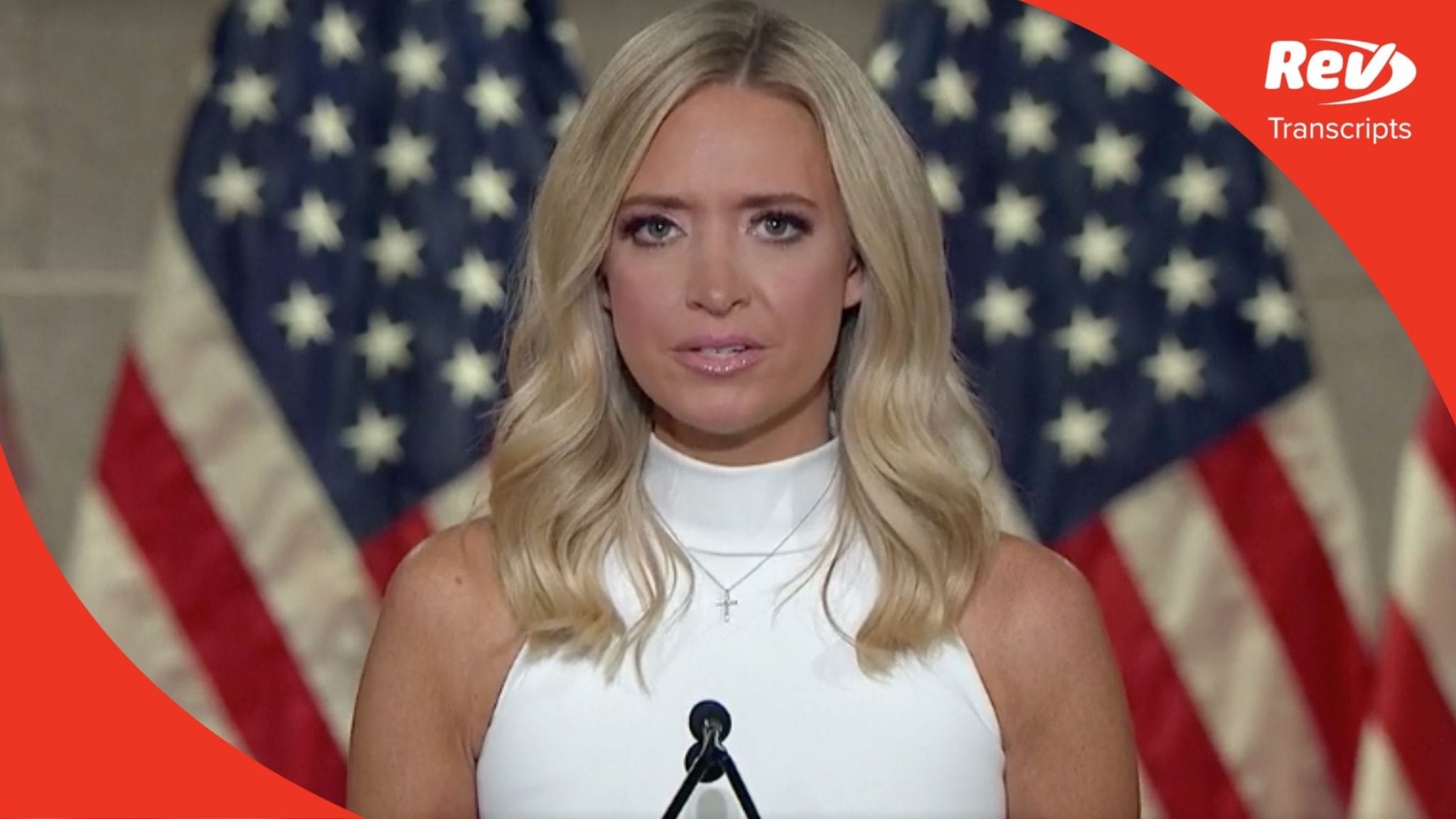 Kayleigh McEnany: (00:00)
I’m Kayleigh McEnany. You may know me as a supporter of President Trump, but tonight I’m here to share with you how he supported me both as a new mom and as an American with a pre-existing condition. When I was 21 years old, I got a call that changed my life. It was my doctor informing me that I had tested positive for the BRCA2 genetic mutation, a mutation that put my chances of breast cancer at 84%. It was the same mutation that my mom had compelling her to get a preventative double mastectomy, removing her breast tissue, but protecting her from a disease that has taken far too many of our mothers, our sisters, our friends. In my family, eight women alone were diagnosed with breast cancer, several in their young twenties. I now faced the same prospect.

Kayleigh McEnany: (01:04)
For nearly a decade, I was routinely at Moffitt Cancer Center, getting MRIs, ultrasounds, and necessary surveillance. During these visits, I crossed paths with brave women battling cancer and fighting through chemotherapy. They were a testament to American strength. They are American heroes. On May 1st, 2018, I followed in my mother’s footsteps choosing to get a preventative mastectomy. I was scared. The night before I fought back tears as I prepared to lose a piece of myself forever. But the next day, with my mom, dad, husband, and Jesus Christ by my side, I underwent a mastectomy, almost eliminating my chance of breast cancer, a decision I now celebrate. Breast reconstruction has advanced remarkably. While it is an individual’s decision, my doctor and I chose a course of surgery that left me virtually unchanged. But more important than physical results, I developed a strength and a confidence that I carry with me.

Kayleigh McEnany: (02:21)
During one of my most difficult times, I expected to have the support of my family, but I had more support than I knew. As I came out of anesthesia, one of the first calls I received was from Ivanka Trump. As I recovered, my phone rang again. It was President Trump calling to check on me. I was blown away. Here was the leader of the free world caring about my circumstance. At the time, I had only met President Trump on a few occasions, but now I know him well, and I can tell you that this President stands by Americans with pre-existing conditions.

Kayleigh McEnany: (03:06)
In fact, President Trump called me this morning. I spoke with him several times today and he told me how proud he was of me for sharing this story. The same way President Trump has supported me, he supports you. I see it every day. I’ve heard him say the hardest part of his job is writing to loved ones of fallen soldiers. I’ve seen him offer heartfelt outreach to grieving parents who lost their children to crime in the streets. And I’ve watched him fight for Americans who lost their jobs. President Trump fights for the American people because he cares about stories like these.

Kayleigh McEnany: (03:53)
I have a nine month old daughter. She’s a beautiful, sweet little girl, and I choose to work for this President for her. When I look into my baby’s eyes, I see a new life, a miracle for which I have a solemn responsibility to protect. That means protecting America’s future, a future President Trump will fight for, where our neighborhoods are protected, where life is sacred, where God is cherished, not taken out of our schools, removed from our pledge and erased from our history. I want my daughter to grow up in President Donald J. Trump’s America. Choosing to have a preventative mastectomy was the hardest decision I ever had to make, but supporting President Trump, who will protect my daughter and our children’s future, was the easiest.