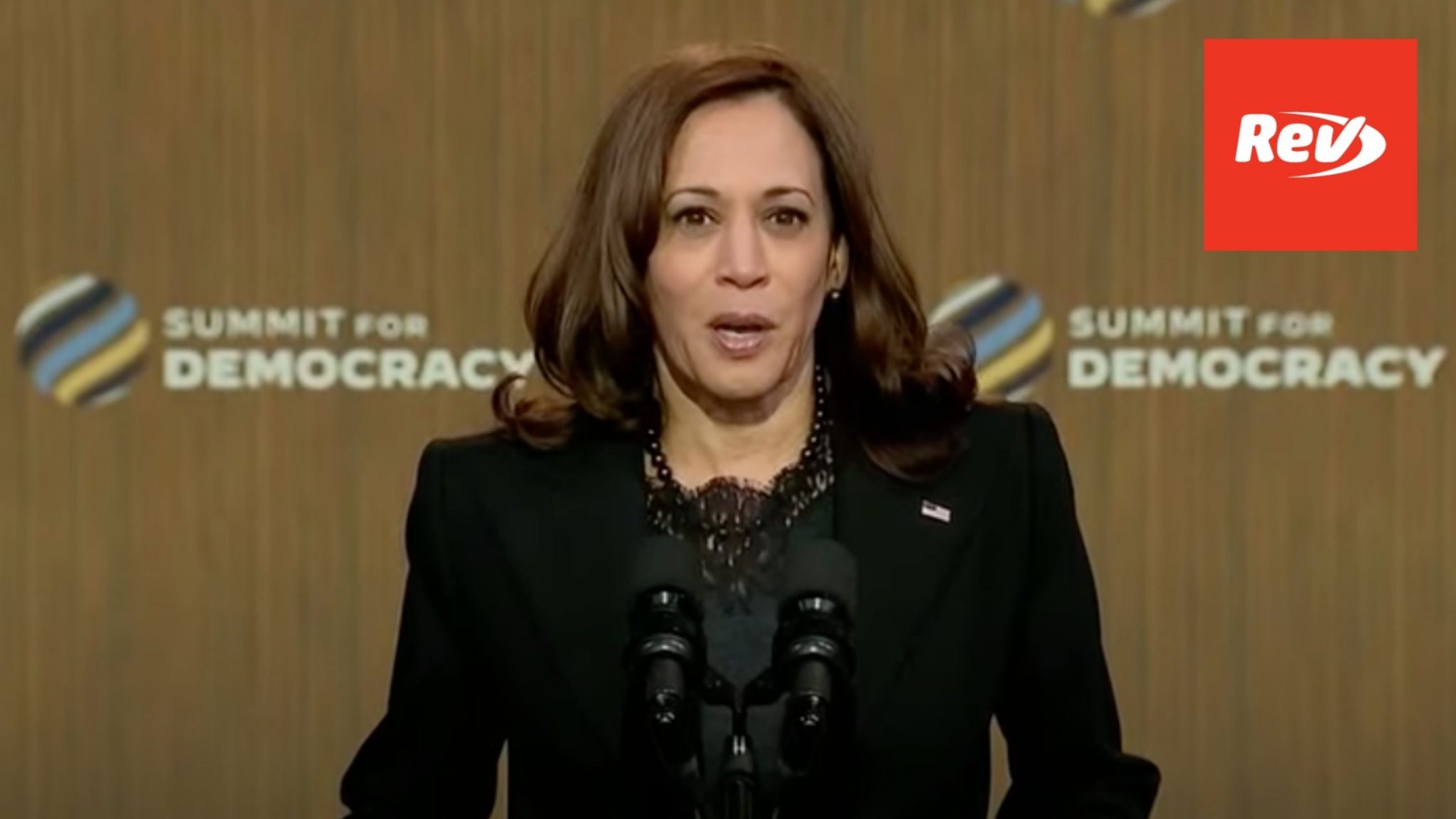 Vice President Kamala Harris spoke at the first ‘Summit for Democracy’ from the White House at December 9, 2021. Read the transcript of her speech here.

Kamala Harris: (00:03)
Thank you, Governor Janet Mills. It’s good to see you, and thank you for your leadership and your friendship. Well, good afternoon, everyone. It is an honor to join leaders from around the world as we conclude the first day of the Summit for Democracy. As I have discussed with many of you, I believe our world is at the start of a new era, an era with new challenges, an era with new opportunities, an era that is defined by interconnection and interdependence. In this new era, I believe that democracy is our world’s best hope, not because it is perfect, but because of its principles, because it delivers for the people.

Kamala Harris: (00:53)
Democracy protects human rights and promotes human dignity. It is a means to create peace and prosperity. It is a means to solve our greatest challenges from COVID-19 to the climate crisis. It is then a particular concern of urgent concern that democracy is presently under threat, and for 15 years has been on the decline. Around the world, autocrats have become emboldened, human rights violations have multiplied, and corruption is undermining progress, and misinformation is undermining public confidence. And so it is incumbent on each of us, individually and collectively, to take action.

Kamala Harris: (01:45)
Here in the United States, we know that our democracy is not immune from threats. January 6th looms large in our collective conscience, and the anti voter laws that many states have passed are part of an intentional effort to exclude Americans from participating in our democracy. In our democracy, in every democracy, a representative government is foundational, and the right to vote is fundamental. And so ensuring every eligible American can access that right is a top priority for our administration, and an effort that I am proud to lead.

Kamala Harris: (02:29)
We know that the right to vote cannot be taken for granted. At every turn, it must be safeguarded and strengthened. And so our Department of Justice has increased its efforts to enforce federal voting rights laws. And our executive branch is taking further action to strengthen the right to vote. But executive action alone is not enough, our Congress must act. Right now, there are two bills before the United States Congress, the Freedom to Vote Act, and the John Lewis Voting Rights Advancement Act. Taken together, these bills would help to ensure that every eligible American can vote and have their vote counted in a free, fair, and transparent election.

Kamala Harris: (03:22)
Today, as the world watches, the president and I reiterate our call for swift passage of these bills. We know our work at home will make us stronger for the world. We also know that the strength of our democracy is tied to the strength of democracies worldwide. And so, we are equally committed to combating threats to democracy wherever they exist, threats, such as corruption, which corrodes public trust, fuels inequality, and can destabilize nations and entire regions.

Kamala Harris: (04:03)
On Monday, our administration released our first ever US strategy on countering corruption. Through this strategy, we will deepen our understanding and response to the transnational dimension of this threat, which I know from my work with leaders around the world is critical. In addition, because human rights and democracy are inextricably linked, the United States has also rejoined the United Nations Human Rights Council. Together, we must protect the rights of people with disabilities, the rights of people of color, the rights of indigenous peoples, LGBTQI+ rights, and women’s rights.

Kamala Harris: (04:49)
In March, I addressed the UN Commission on the Status of Women. And I will say what I said then. I strongly believe the status of women is the status of democracy. The exclusion of women in decision-making is a marker of a flawed democracy, and the full participation of women strengthens democracy. To that end, our administration has launched the first national strategy on gender equity and equality. We are working to defend equal rights, including reproductive rights, which are at grave risk here in the United States. And we are working with partners around the world to promote the full participation of women and girls.

Kamala Harris: (05:40)
I will conclude today with a short story. This week, as we know, Olaf Scholz took office as the Chancellor of Germany. And the president and I both look forward to working with him as we did with his predecessor. And on that point, back in July, this last July, I welcomed German Chancellor, Angela Merkel to my residence here in Washington, DC. We spoke then about the status of democracy in our respective nations and around the world. And I mentioned my belief that democracy is marked by both its strength and its fragility. It was a thoughtful and a powerful conversation, and it was also very personal. The Chancellor shared what it was like to live behind the Iron Curtain. And I shared how the Civil Rights Movement influenced my upbringing. Though we grew up in different times and places under very different circumstances, the importance of democracy in our own lives was, and remains clear.