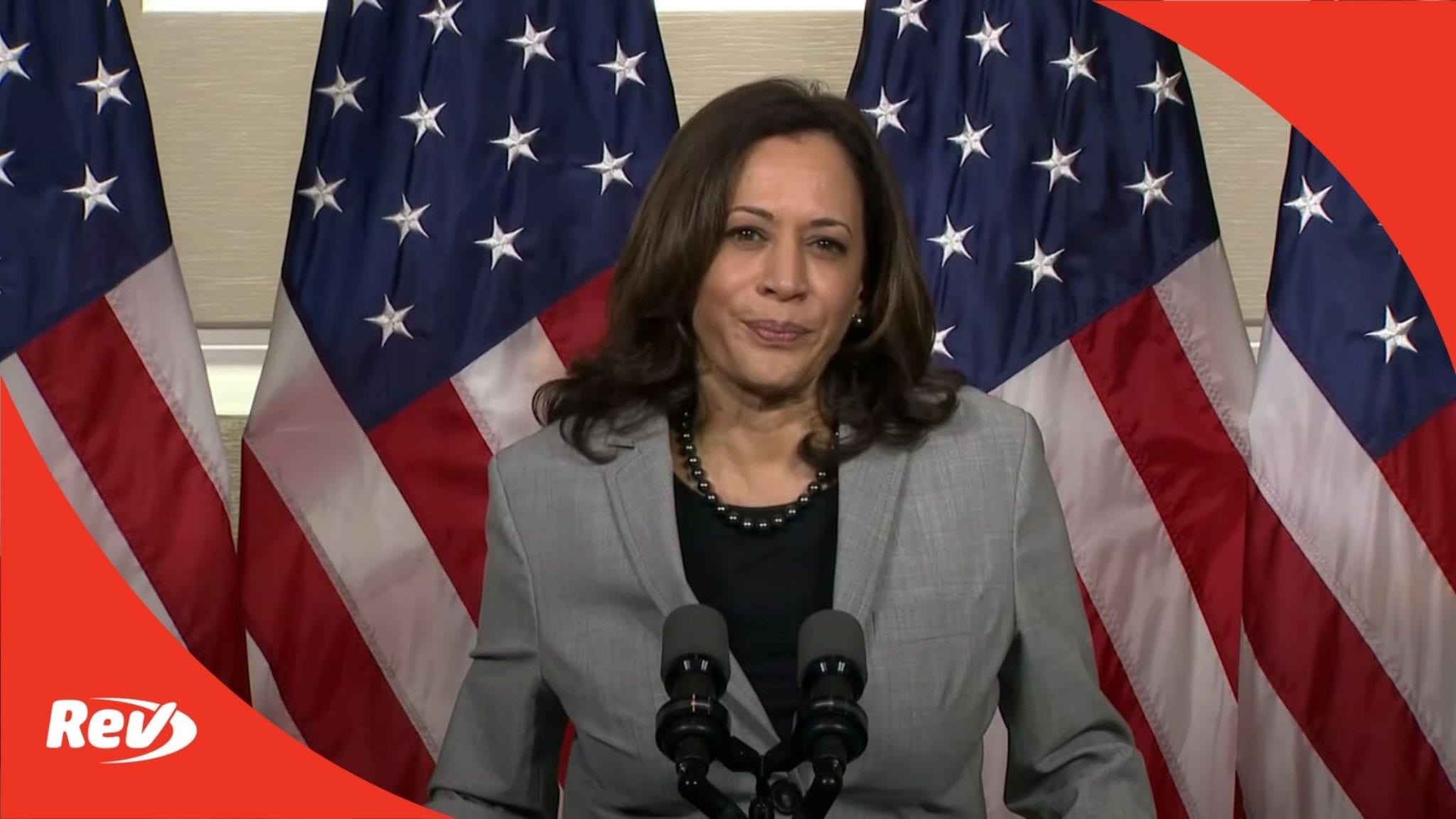 On September 28, Kamala Harris gave a speech on Donald Trump’s Supreme Court nomination of Amy Coney Barrett and the final weeks of the 2020 presidential race. Read the full transcript of her speech here.

Kamala Harris: (01:18)
Good afternoon. On Friday morning I attended the memorial service of Justice Ruth Bader Ginsburg in the United States Capitol. She was the first woman in our history to lie in state. I sat a few feet away from her flag-draped casket to pay my respects and it was somber and it was personal. And it was an extraordinary moment for me as I’m sure it was for you and millions of Americans and people around the world who felt a connection with the great RBG. It was sad because we lost a giant, not only of the court but of American life. It was a celebration.

Kamala Harris: (02:11)
Few people in our history have done more to change the lives of the American people than Ruth Bader Ginsburg did as a lawyer, an advocate, and a Supreme Court Justice. And it was an inspiration and a call to each of us, for each of us to be better, to stay in the fight and stay committed to what motivated Justice Ginsburg the most, that phrase etched in the marble of the United States Supreme Court, “Equal Justice Under Law.”

Kamala Harris: (02:48)
Justice Ginsburg came to her view of the law not from a textbook but from life, her own life. She often told the story of how she had personally felt the sting of discrimination as a woman, as the mother of a young child trying to find work. And so she committed her life step-by-step, case-by-case, law-by-law, to tear down the obstacles in the way of so many and especially women. Now, we are about to undertake the task of finding her replacement on the United States Supreme Court. Of course, it’s hard to say those words. In truth, Ruth Bader Ginsburg cannot be replaced, she was an original, a one of a kind. She combined a steel spine with an ability to extend an open hand, never a closed fist.

Kamala Harris: (04:01)
She demonstrated you could both hold firm to your principles and still hear those with whom you disagree. That is a lesson that should be ringing in our ears, but it looks like this president and his party are not interested in hearing any of the lessons from Justice Ginsburg. Already the president and his party have chosen to ignore Justice Ginsburg’s final wish, to hold off the nomination to replace her until after the next president is chosen, a wish by the way shared by the American people. And look, it’s not complicated, the voters would simply like to have an opportunity to vote for their president before the Senate votes on a nominee. And that’s not too much to ask but President Trump and his party are not interested in hearing the will of the people, in fact as my sense is, that they’re afraid of what they’re going to be told.

Kamala Harris: (05:15)
We are not even debating, okay, this is really important. We’re not even debating whether the Senate should hold hearings on a nominee and in election year, we’re not in the middle of an election year, we’re in the middle of an election, an ongoing election. Almost a million Americans have already voted and more will vote this week and next week, and in just a few weeks all Americans will have voted. But President Trump and his party don’t care, they just want to jam this nomination through as fast as they can. It’s called raw power.

Kamala Harris: (06:07)
But President Trump and his party are about to learn something. They may think that it is they who have the power in this country, but they don’t. The American people are the ones who have the power, you have the power and you can make it very clear very soon how you feel about being cut out of this Supreme Court nomination process. Even worse, though then the president and his party ignoring Justice Ginsburg’s final wish, is their determination to appoint a Justice who will undo her life’s work.

Kamala Harris: (09:11)
In short there are a few things they could do that would be more offensive to the legacy and the life of Justice Ginsburg than to return us to the full-scale policies of discrimination in healthcare toward the women of our country. But that’s what overturning the Affordable Care Act will do, and overturning the Affordable Care Act is a way a nominee gets the support of this president and his party.

Kamala Harris: (10:27)
If nothing else the voters should be very clear about one thing, President Trump and his party and Judge Barrett will overturn the Affordable Care Act and they won’t stop there. They have made clear that they want to overturn Roe v. Wade and restrict reproductive rights and freedoms. Judge Barrett has a long record of opposing abortion and reproductive rights. There is no other issue that’s so disrespects and dishonors the work of Justice Ginsburg’s life than undoing the seminal decision in the court’s history that made it clear a woman has a right to make decisions about her own body.

Kamala Harris: (11:21)
But that’s where President Trump and his party and Judge Barrett are, so let’s make it clear where we are. Let’s vote for healthcare, vote for the Affordable Care Act. Vote as if your life, your choice depends on it because it does. Make it clear to President Trump and to every Republican Senator that if they’re determined to get rid of your healthcare you’ll be just as determined to vote them out of office. And second, vote as if your right to vote depends on it, because it does.

Kamala Harris: (12:06)
In 2013, the Supreme Court’s decision in Shelby v. Holder gutted the hearts of the Voting Rights Act. Soon after numerous states including Texas, and North Carolina, and Alabama, and Mississippi enacted discriminatory laws designed to suppress the people’s right to vote and targeted people of color and students. Justice Ginsburg wrote that the decision was like, “Throwing away your umbrella in a rainstorm.” Right here in North Carolina, a voter suppression law was described by a federal court as having targeted African-Americans with almost surgical precision to deny us the right to vote, surgical precision.

Kamala Harris: (13:00)
After the people of Florida voted to grant formerly incarcerated citizens the right to vote Republican officials recently enacted a modern-day poll tax to make it harder for those citizens to exercise that very right in this upcoming election. And this modern-day poll tax was upheld by the 11th Circuit Court of Appeals in large part because of judges appointed by Donald Trump. But you see here’s the thing, he knows he can’t win if the people vote. Donald Trump is weak so he is throwing up every roadblock he can to try and suppress the vote and we the people can not let him get away with it.

Kamala Harris: (13:53)
Third, what’s at stake? Our ability to make a living, take care of our families and dismantle systemic racism, that’s at stake too. For example, court decisions can determine your ability to earn a living wage, to receive equal pay for equal work, or collectively bargain for your rights at work. With an extra vote on the court, Donald Trump and his party will continue their attack on laws that keep our air clean and our food and water safe and attack any legislation that addresses climate change. They will also continue to divide us and ignore the systemic racism that still plagues our society.

Kamala Harris: (14:43)
Their decisions could fail to hold the actors in our criminal justice system accountable. Victims of abuse of power by law enforcement could be less likely to succeed on their civil rights claims. The due process rights of criminal defendants could be less likely to be vigorously enforced. These are the decisions that would upend Justice Ginsburg’s life’s work to uphold basic liberties of all Americans regardless of race, gender, sexual orientation, religion, disability, or economic station.

Kamala Harris: (15:25)
Yes, she was part of our culture. Yes, we wear those notorious BIG T-shirts with a lot of pride, but since she passed there are parents reminding their children that she helped their lives in concrete yet immeasurable ways. Because of her they could get a job of their dreams, fight for equal pay for their work, marry the person they love, serve the country they love and enjoy the full rights and privileges of citizenship that they deserve free of discrimination. And that legacy, her belief in all of us is at stake.

Kamala Harris: (16:17)
The outcome of this election more than any other in our lifetime affects every part of your life and every branch of government all at once with consequences that will last generations, and all with the nation in crisis and at a crossroads, the pandemic, the recession, a reckoning on racial injustice, a changing climate, a crisis with the nomination to the Supreme Court. I know that it feels sometimes like this is just too much, too much for us to take, too much for our country to take, and I think that’s what they want you to believe. They want you to feel tired, they want you to feel like your fight doesn’t matter but we will not give up and we will not give in.

Kamala Harris: (17:21)
We will not let the infection that President Trump has injected into the presidency and into Congress that has paralyzed our politics and pitted Americans against each other spread to the United States Supreme Court. This election is about more than the presidency or the Senate or the Supreme Court, this election is about our democracy. And as Joe Biden has said from the moment he entered this race it’s about the soul of our nation, who we are, what we stand for, and maybe most importantly, who we want to be.

Kamala Harris: (18:12)
And that’s what I felt when I said goodbye to Justice Ginsburg. She understood the soul of our nation and what is expected of each of us. And that belief is especially resonant at a place like Shaw University, one of our nation’s first black landmarks of higher learning established just six months after the Civil War. People born into bondage and brutality stood on this very ground as graduates and as scholars. I stand here at Estey Hall, the country’s first university hall built to educate black women in America. A century later and a few months after the Greensboro sit-ins, Ella Baker and fellow students at Shaw established the Student Non-Violent Coordinating Committee that our dear John Lewis would one day lead.

Kamala Harris: (19:13)
I stand here on their shoulders and with all of you as the nominee for vice president of the United States. I stand with Joe Biden who will be your next president, I stand with Cal Cunningham who will be the next Senator from the great State of North Carolina, and I stand with them and the American people to fight for a Supreme Court Justice who like Justice Ginsburg truly believes in equal justice under law. May God bless Justice Ruth Bader Ginsburg, may God bless you all and may God bless the United States of America. (silence).