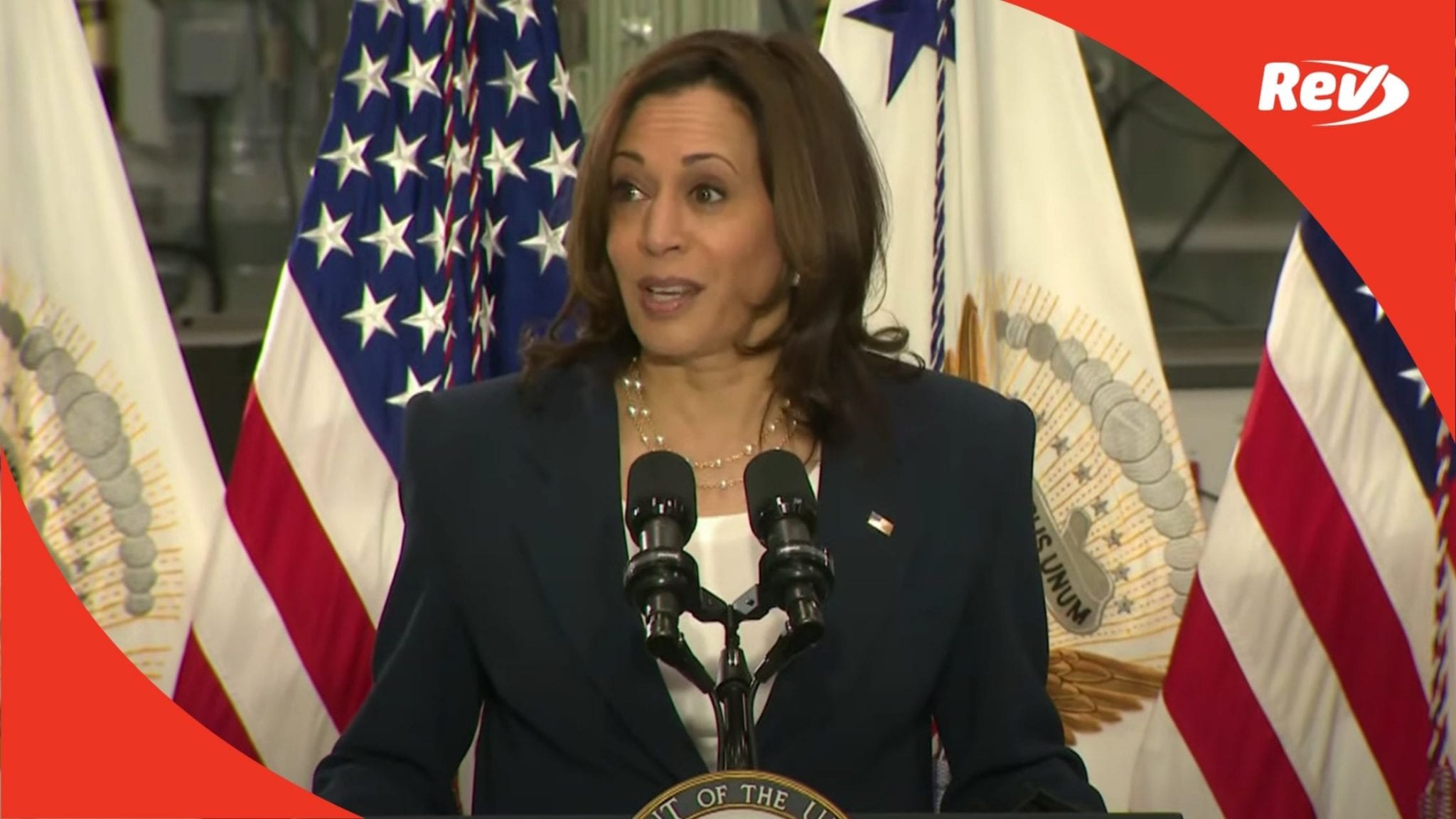 VP Kamala Harris gave a speech on the American Jobs Plan in North Carolina on April 19, 2021. Read the transcript of her remarks here.

Kamala Harris: (01:39)
Hello North Carolina. Hello and good afternoon. Please have a seat. Good afternoon. It is so wonderful to be back in North Carolina and I just want to thank you everyone. Vanessa, your story is extraordinary and thank you for all you have accomplished. You are truly a role model for so many. And Dr. Anthony Clarke, I want to thank you for the warm welcome. It is truly an honor to be with north Carolina’s own EPA administrator, Michael Regan, with my long standing friend, Governor Roy Cooper, and with Congresswoman Kathy Manning.

Kamala Harris: (02:42)
On January 20th, just hours after President Joe Biden and I took the oath of office, I stood in front of the Lincoln Memorial that evening, and I talked about what I call American aspiration. I talked about how in America, we not only dream, we do. We not only see what has been, we see what can be. We shoot for the moon and then we plant our flag on it. And now we are already 90 days into our administration and folks, we have seen American aspiration at work.

Kamala Harris: (03:30)
We set a goal to get 100 million shots in arms in 100 days. And through the innovation of scientists, the hard work of manufacturers and the determination of the American people, we will soon pass 200 million. We made a commitment to get checks directly to the American people and to date 159 million have been sent out and more jobs have been created in the first two months of our administration than in the first two months of any other White House in history.

Kamala Harris: (05:19)
So that is what the American Jobs Plan is all about. It’s a once in a lifetime, once in a generation investment in America’s infrastructure, in America’s future. It is what the American people deserve. It will keep our nation competitive, it will build up our nations communities, and it will put our nation back to work. As nearly 10 million Americans remain unemployed. More than 250,000 right here in North Carolina. The American Jobs Plan will create millions of jobs. It will be the largest jobs investment our country has made since World War II. It’s not only about jobs. It’s about good jobs, good jobs for every worker. Good jobs for every worker everywhere.

Kamala Harris: (06:27)
Over the years, folks here in Greensboro has shown me around their hometown with great pride about where they’re from. And we’ve seen this around the country. Too often, though, opportunity knocks from far away and their children grow up and have to move away. But that should be a choice, not a necessity and that’s why we want to bring opportunity closer to home. Through our American Jobs Plan, a pipe fitter in Chicago could get a good job replacing lead pipes in their own city. An Electrician in Helena could get a good job laying broadband lines a few towns over. A forklift operator right here in Greensboro could get a good job fixing the road they drive on every day.

Kamala Harris: (07:29)
Now the phrase, good job is one you’ve probably heard a lot about, but I want to break down what I mean when I talk about a good job. In the 21st century in America, I believe you should not have to work more than one job to be able to pay your bills and feed your family. One good job should be enough. And a good job, you shouldn’t have to worry about your safety. You shouldn’t have to worry about whether you have the ability to get a good life, because you might have to go in debt for a diploma that promises a decent paycheck. It’s pretty simple.

Kamala Harris: (08:21)
A good job allows people the freedom to build the life you want, to reach as high as you want, to aspire. That’s what a good job does and good jobs are what the president and I will create with the American Jobs Plan. We will draw on the skills that millions of workers in our country already have. Just look at what’s happening here. The skills of pipe fitters, and electricians, and welders, construction workers, and factory workers, and transit workers, and care workers too. And if you don’t have those skills, or if you want to learn other skills, we intend to help you get them.

Kamala Harris: (09:58)
For some that’s a training program or an apprenticeship to get the certificate, they need to get the job they want for some that’s a technical college, just like this one. And for others, it’s a four-year college degree. There isn’t only one path to success. A majority of the jobs we will create through the American Jobs Plan will require at most six months of training after high school. And we’re going to invest in workforce development in a big way. We’re also going to create as many as two million new registered apprenticeship slots.

Kamala Harris: (10:41)
We’re going to make sure that these opportunities are equally available to women as well as men. Because there’s an interesting fact in case you didn’t know, hardhats are actually unisex. Everybody’s laughing. So now the best way I also believe to get a good job is through a strong union. Union members have better pay, better healthcare, better retirement, better protections on the job. I believe every worker in America deserves the ability to organize or join a union. And there’s another thing about American jobs and the American Jobs Plan. It will not only create good jobs, it will have a big impact, impact on communities. It will have a big impact on people’s quality of life at home.

Kamala Harris: (11:49)
Let’s talk about, for example, broadband. The runs online, and yet millions of Americans, many of whom live in rural America do not have access to broadband and if they do it is not affordable. Broadband impacts our economy. It impacts our education system, our healthcare system. I’m talking about small business owners who don’t have the literal bandwidth to grow their businesses. Students who can’t study at home, who have to drive to the local McDonald’s to the parking lot to get access to their WI-FI.

Kamala Harris: (12:31)
Seniors who haven’t seen their doctor because in the middle of a pandemic, telemedicine is not an option for them. The president and I are determined to make sure that every person in our country can access broadband and afford it. Let’s talk about water. There are more than one million miles of pipes that deliver drinking water to homes across America. For as many as 10 million American families, many families of color, those pipes are made of lead. So here’s what drinking water from a lead pipe can do to the human body.

Kamala Harris: (13:24)
For adults, it can increase your blood pressure and decrease kidney function. For children, it stunts growth and can cause damage to the brain. In fact, the Centers for Disease Control, they’re quite clear when they say lead exposure harms our children. That is why we are going to replace every lead service line in our country and invest in our country’s water infrastructure.

Kamala Harris: (14:06)
At its root, I believe that infrastructure is about all the support systems that make our country work. Roads that keep us moving, water that keeps us healthy, broadband that keeps us connected, and care, childcare, home care. Because here’s the thing. Think about it, care, childcare, home care keeps us working. It keeps working people working. Just ask any parent who has been home with their kids for the last year. Ask anybody who has been caring for their mother or their father for the last year. Care should be readily available and affordable to working people.

Kamala Harris: (15:07)
Caregivers should be paid fairly and treated with dignity and respect. Small business owners who run childcare and home care businesses must be fully supported. Care infrastructure is a basic foundational support system for our nation. It is part of the infrastructure that allows us to be productive, to do the work that we must do, to be functional as a society. And I believe it is past time we invest in it. Here is the bottom line. This plan, the American Jobs Plan, is not just about fixing what has been. It is about building what can be.

Kamala Harris: (17:06)
North Carolina, the president and I are determined to get this done. And like you, like Americans everywhere, we are not afraid of the hard work it will take. So for all of that, I thank you, North Carolina. It is so good to be back. May God bless you and may God bless America. Thank you.