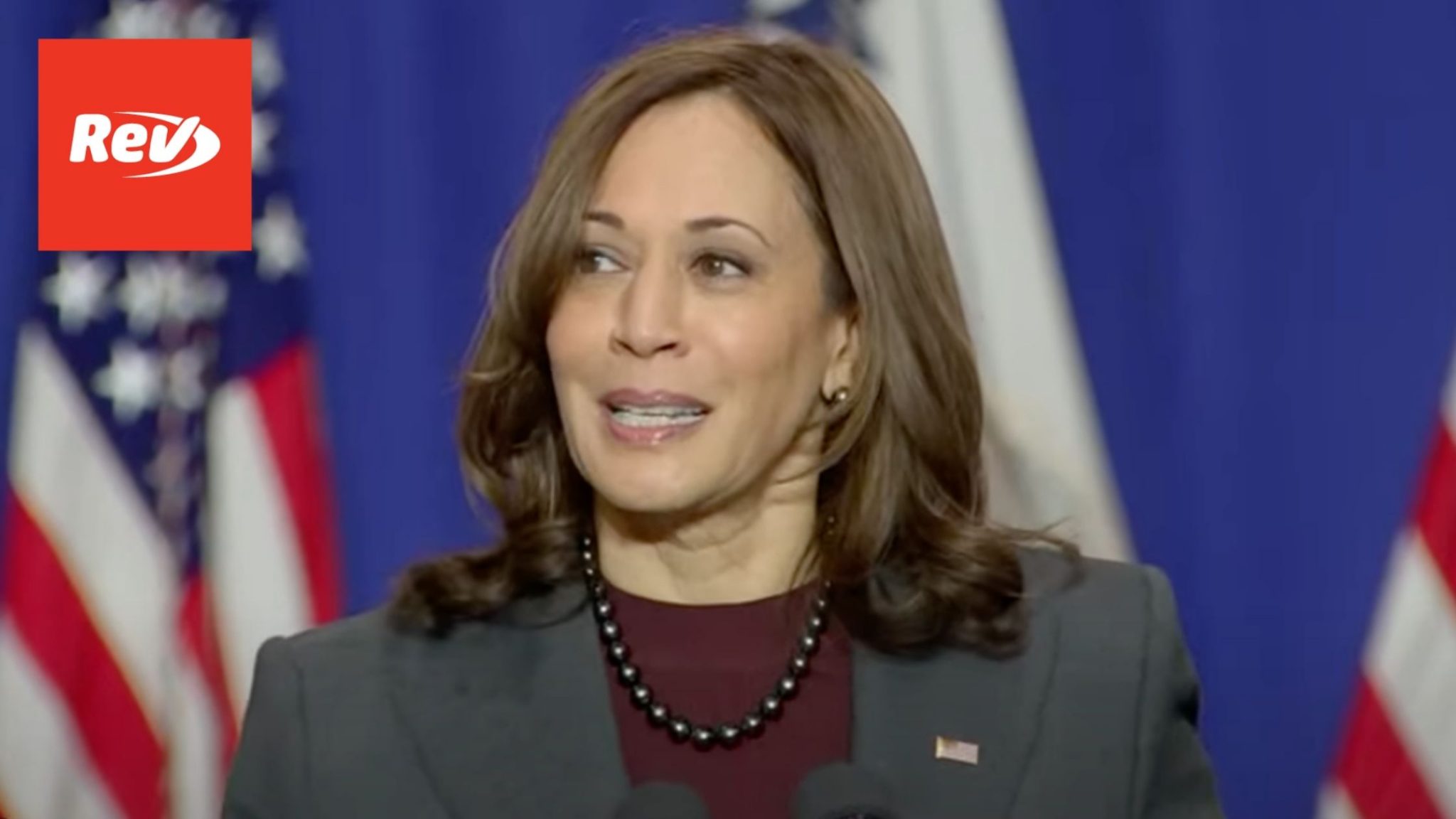 Vice President Kamala Harris toured an EV factory on December 13, 2021. Read the transcript of her speech on clean energy here.

Kamala Harris: (00:00)
And good morning. Good morning, Maryland. So before we get started, I do want to say a few words about this weekend’s devastating storms. Our hearts of course, go out to the communities that have been impacted. You lost so much and so quickly. So we are committed, the president and I, and our administration to helping you and to helping to heal the wounds, which will probably be long lasting. And we will continue of course, to monitor the situation closely and to do everything in our power as the federal government and as leaders to help you get through this.

Kamala Harris: (00:45)
With that, again, I want to thank the members of the administration, American leaders for joining us here today. Secretary Jennifer Granholm, national climate advisor, Gina McCarthy. Thank you for the work you do tirelessly. You’ve been traveling around the country, talking about these issues in a way that, yes, is inspiring people to see what is possible and believe in it. Ben Cardin, Senator Ben Cardin and where is Chris van Hollen? Chris van Hollen, who was my classmate entering the Senate and I’ve seen him work so hard. I want to thank you both, as my former colleagues, I do think of as partners in everything we are doing and thank you for your leadership. Yes.

Kamala Harris: (01:35)
The one and only majority leaders, Steny Hoyer, thank you for all that you do. I was joking with him backstage, about every time I’m with Steny, traveling around the world sometimes, but always with a focus on what’s in the best interest of the people of Maryland. And he really is a gem. And I thank you, Maryland for sending him to Congress. And Executive Angela Alsobrooks, who I have known for many years, we have work closely together. I thank you for your leadership and for the warm welcome. Thank you. And I will tell you, Maryland, I have seen these leaders when the cameras are on and when the cameras are off and they are the same people, always fighting. Fighting for the people of America, fighting for the people of Maryland. And they do so much that really is about having, yes, fight but a fight that is born out of optimism. Their work really is the work of inspiring people to see what can be, unburdened by what has been and on behalf of the president and I, thank you so very much for your continuing and long standing service to our country.

Kamala Harris: (02:46)
So Maryland in the year 2021, there can be no doubt the future of transportation in our nation and around the world is electric. And because that is true, our nation’s ability to manufacture, charge and repair electric vehicles will determine many things. Including one, the health of our communities. Two, the strength of our economy and three, yes Gina, the sustainability of our planet. So today, I’ll talk about each one in turn. First, the health of our communities. So as you have heard, when I was attorney general of California, I served with this as one of my highest priorities. And during that time, I heard about a town in California called Mira Loma. And this town had some of the worst air pollution in the state and the community was demanding action. So I went there to visit them, to listen to them, to stand with them. Mira Loma is a community, not unlike communities around our nation. With hard working people, working hard jobs and in closed proximity to large shipping warehouses and major highways. Every day, trucks made more than 15,000 trips on Mira Loma’s main roads.

Kamala Harris: (04:28)
And so it’s no surprise, it brought them an incredible amount of soot and exhaust. And the air of course was then toxic. The first time I went to Mira Loma, the pollution literally stung my eyes. If you’ve ever had that experience, you’ll know what I’m talking about. Where the air can sting your eyes and you can taste almost the metal. Studies showed that the children there were suffering from some of the poorest lung development in any region of the state. People there told me that there were folks in their community suffering from cancer, from asthma and heart disease. The fact is there are many Mira Lomas all over our country. The pollution from vehicles powered by fossil fuels has long harmed the health of communities around our country, communities overlooked and underserved. But there is a solution to this problem and it is parked right behind me.

Kamala Harris: (05:40)
Electric cars, trucks, and buses, they don’t produce tailpipe emissions that irritate the nose and eyes, that decrease lung function, that increase susceptibility to respiratory illness. And so putting more electric vehicles on our roads will make communities like Mira Loma, healthier for our babies, which brings me to my second point. The strength of our economy. Sales are up, driven by consumer demand. The auto industry is clearly moving toward electric. We need to make the shift faster and make sure it is driven by the United States. That means manufacturing millions of electric cars, trucks, and buses, right here in our country.

Kamala Harris: (06:34)
That means outfitting thousands of EV, electric vehicle repair garages, just like this one. And it means installing a national network of EV chargers. When we ask people, what is the biggest barrier for them to buy an electric car? The answer is almost always, figuring out where and how to charge it. People who live in apartments, for example, might not have a private driveway where they can install a plug. You heard the secretary talk about that. Well, when we install public chargers in rural, urban and suburban neighborhoods, we make it easier for people to go electric. It’s that simple. It’s about being clear about what we need to get done and then to do it. In this imperative to go electric, there is an immense opportunity. We will create good paying, good union jobs communities around our country.

Kamala Harris: (07:41)
And that work has already begun. Earlier this year, I visited the Thomas Built Buses factory in North Carolina. And I talked with workers who are building electric school buses. I toured their factory floor and I spoke to, you know it, all those skill workers who make it possible. Electricians, engineers, machinists, mechanics, who took the time to develop their skills, to produce the future of America in this world. And I told them what I will share with you. We must build on this work, our future depends on it. Which brings me to my third point, the sustainability of our planet. So the science is clear. Climate change has become a climate crisis and it and urgent action. Across our nation, rising sea levels are flooding streets, wildfires are burning out of control and here in the DMV, we have all felt the impact of extreme storms and heat.

Kamala Harris: (08:56)
Ben Cardin talked about that. To combat this crisis, our administration has joined other nations in setting, yes, an ambitious but achievable goal. By 2050, at the latest, we will achieve net zero emissions. And one important way we achieve net zero emissions is by investing in zero emission vehicles. And that is why right now, we are making the largest ever investment in electric vehicle infrastructure and technology in our nation’s history. Last month, the president and I, were able to turn the bipartisan infrastructure deal into the Bipartisan Infrastructure Law with the help of these extraordinary leaders who are right here, pushed it along the way. Yes.

Kamala Harris: (09:52)
Now, the Bipartisan Infrastructure Law is an achievement in and of itself because as we all know, it was long overdue. It’s an achievement in and of itself because it was in these moments of what can seem like partisan conflict nonstop, it was bipartisan. But this law will also invest seven and a half billion dollars to a national network of EV charging stations. It will invest billions more in electric power transmission to make sure those charging stations are supplied with clean energy. And drawing from a bill I introduced when I was the United States Senator, our Bipartisan Infrastructure Law will expand our nation’s fleet of electric school buses. Think about that.

Kamala Harris: (10:44)
I was talking with the moms who have been leaders on this. Yes, we are very excited about electric school buses for good reason. Think about it. Yellow school buses are our nation’s largest for form of mass transit. Our largest form of mass transit are those yellow school buses that many of us went to school on. Every day, more than 25 million children and thousands of drivers ride to and from school on diesel buses, breathing toxic fumes. Making the switch from diesel to electric is about improving the health and wellbeing of our children, of our future, and to ensure the robust implementation of the EV components of this law. Today, I am also proud to release our administration’s electric vehicle charging action plan. This plan includes a new office, the joint office on energy and transportation that will ensure agencies are working together for the implementation of this law.

Kamala Harris: (11:58)
And I know Secretary Granholm and Secretary Buttigieg will announce more details tomorrow. But the president and I are very excited about this and have great confidence in their leadership of this innovative office. Now, as significant as it is, as historic as it is, our bipartisan infrastructure law is part one of two. Part two of two is our Build Back Better Act. The president and I, know that families are stretched thin and we take that seriously. And we have designed this bill to help everyday folks who just need a little bit more support. So we are lowering the costs of everything from childcare to healthcare, from prescription drugs to electric vehicles. Our Build Back Better Act will cut the sticker price of new electric vehicles made in America by union workers by up to $12,500. And it will also include, and this is a new approach, a tax credit of up to $4,000 for used electric vehicles.

Kamala Harris: (13:17)
To ensure that electric vehicles are affordable for everyone. So here’s the bottom line, we want more families in America to be able to afford an electric car that is made in America. The House passed our Build Back Better Act just before Thanksgiving and the president and I are confident that the Senate will soon do the same. This bill is fully paid for and will not raise taxes on anyone making less than $400,000 a year. We are determined to get it passed and bring own everyday costs for the people of our nation. So, as I said from the start, the future of transportation is electric, but that future is not inevitable, it must be built and it is being built in places like Prince George’s County and in garages like this very one. With every vehicle you repair, with every charging station you install, you are building a better America. Together we are building a better America and isn’t that so very exciting? So thank you all, may God bless you and may God bless America. Thank you all.