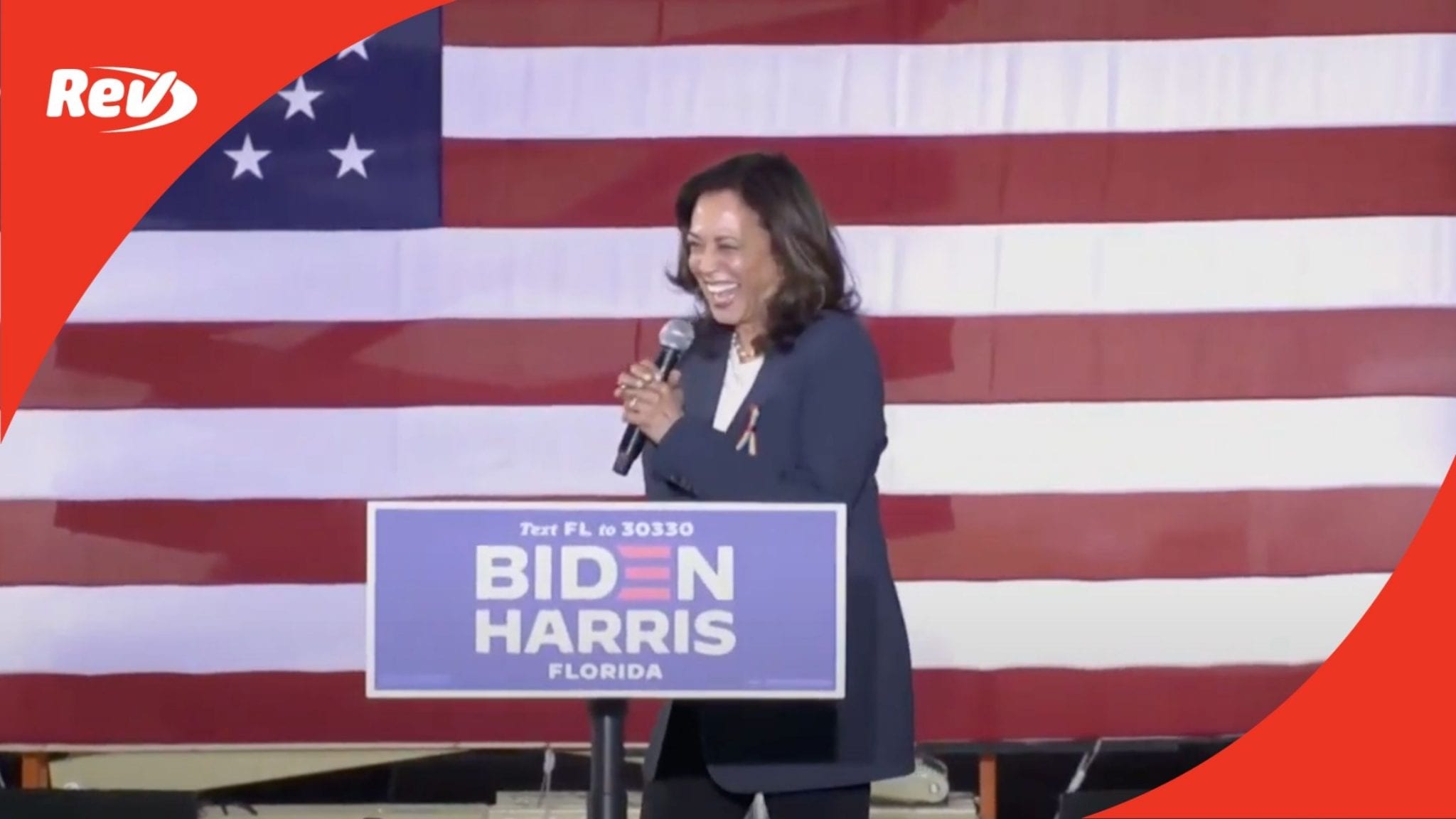 Kamala Harris: (00:00)
What’s up, Florida? Orlando. Oh, oh. Oh, look at what my eyes behold. Today, I had to come here on the kickoff of early voting in Florida, because you all are going to make it happen. You will make it happen.

Kamala Harris: (03:01)
And let’s think about how we got here. I don’t know if you all saw that debate that we did a couple of weeks ago, but Joe’s been on the stage debating. We have another debate coming up. He did an amazing job at the town hall. Did you all watch that? Right? It was a true exercise in contrast.

Kamala Harris: (03:27)
So what we know is this. Back in January, the current occupant of the White House knew. He had inside information. He knew that this virus was five times more deadly than the flu. He knew it would impact children of America. He knew it was airborne. But what’d he do? He kept that information to himself. I call it a coverup.

Kamala Harris: (04:07)
He didn’t let you know on January 28th what he knew on January 28th. Can you imagine if you all knew, if we knew on January 28th what he knew? Can you imagine what parents and families and each of us might’ve been able to do to prepare for this? If we had known it was airborne, what we might’ve done in the spirit reverend of love thy neighbor to make sure we all wore masks every day. What folks might’ve been able to do, knowing already in our country that in 99% of the counties in America, before the pandemic, if you are a minimum wage worker working full-time, you couldn’t afford market rate for a one-bedroom apartment, what America would have done to prepare for the inevitability that businesses might shut down, to prepare, because in Trump’s America, it will not be the case in Joe Biden’s America, that folks who are working without paid family leave, without paid sick leave, what people might’ve done to prepare.

Kamala Harris: (05:23)
But he didn’t tell the American people. He covered it up. And now, we look at where we are and we are in the midst of four crises happening at the same time in the moment where we are also witnessing the greatest failure of any presidential administration in the history of America.

Kamala Harris: (05:51)
So we are looking at a public health crisis, which I describe as being a crisis of proportion in terms of the loss of life like we have not seen since World War II. Over 215,000, we’re approaching 220,000 human beings, their lives lost. So many who couldn’t even be, because of the nature of the virus, with their families in their last days. We’re looking at over eight million people who contracted the virus. We’re looking at over 30 million people who had to file for unemployment insurance. We’re looking at our children, so many of whom don’t have access to broadband, much less have a laptop, and are trying to now figure out how to get the education that they deserve because of the God-given talent they have and how that should be nurtured. But yet, there is no access and no meaningful access to the education they need.

Kamala Harris: (07:00)
These days lost because of this virus that this man had an opportunity to deal with, but denied fact, denied science, and lied to the American people. So we know we need a change, and a change is coming.

Kamala Harris: (07:29)
And then, in the middle of it all, you all have been hearing me talking about it. Donald Trump has this weird obsession with trying to get rid of whatever Barack Obama and Joe Biden created. Have you noticed that? It’s this weird obsession, right? Loco.

Kamala Harris: (07:49)
And so in the midst of a public health crisis, Donald Trump and Joe Biden, who in their administration created the most extensive public health coverage we’ve ever seen with the Affordable Care Act, also known as Obamacare, and do you know Donald Trump is in court right now trying to get rid of it with his boy Bill Barr, trying to get rid of the Affordable Care Act that brought coverage to over 20 million people, that said if you have pre-existing conditions, things like diabetes … Do you know anybody who has diabetes? Pre-existing conditions like high blood pressure, breast cancer, all of these things now covered because of the Affordable Care Act that Barack Obama and Joe Biden created. And Donald Trump is in court trying to sue to get rid of it.

Kamala Harris: (08:48)
But we’re not going to let him. We’re not going to let him, because what we know and what Joe knows is access to healthcare should be a right and not just a privilege of those who can afford it. So we’re going to fight. We’re going to expand Medicare. Joe Biden is going to bring down eligibility for Medicare to age 60. We’re going to bring down prescription drug costs. We are going to preserve social security and the promise we made to our seniors. We’re going to expand coverage under the Affordable Care Act to include mental health care, because folks have been traumatized and we’ve got to stop treating healthcare as though the body just starts from the neck down. Let’s deal with healthcare from the neck up.

Kamala Harris: (09:46)
These are the things we’re going to do. And by the way, in those debates, as per usual, you can rely on Donald Trump to engage and distortions and basically lie to the American people. So let’s be clear about this. Joe Biden will not increase taxes on anyone who makes less than $400,000 a year, period.

Kamala Harris: (10:16)
So there are a lot of issues at play, so many issues at play, and there’s so much at stake. And I wanted to come. I just landed. I just landed. This was my first stop today. And I wanted to come here to see you for the kickoff of early voting, to thank you, to thank you, to thank you, because as much as they’ve been trying to destroy our democracy, the one thing I know is that, when the people are prepared to fight for our country based on love of country, they can never do us any harm, because we will stand up and we will march and we will organize and we will vote and we will fight for our country.

Kamala Harris: (11:13)
So we know what’s at stake. And so here’s the bottom line. In Florida, I know what’s going on here. I’ve been reading about it and hearing about it. You all have been telling me about it. Aside from the incredible leadership that you’ve got in Congressman Val Demings and, of course, Stephanie Murphy and Senator Bill Nelson, who was a great friend, I know you got some other elected officials in this state, too, that aren’t doing necessarily what’s in the best interest of all the people.

Kamala Harris: (11:49)
And so I want to say this. When we see examples of people trying to make it difficult for folks to vote … And it’s happening all over the country, people trying to suppress the vote, Donald Trump trying to confuse people about the integrity of our voting system, trying to suggest that you can’t trust it. Right?

Kamala Harris: (13:53)
And so that’s why we’re all here today, to say, “We are powerful, we are strong, we stand together in unity, we stand here as a coalition of people that represent the beautiful diversity of who we are as a country.” And we know that when we vote and when we use our voice, we win. We know our country is worth it. We know and can see a better day. And so let’s get out there and organize, folks, and make sure everybody votes. And we will win.