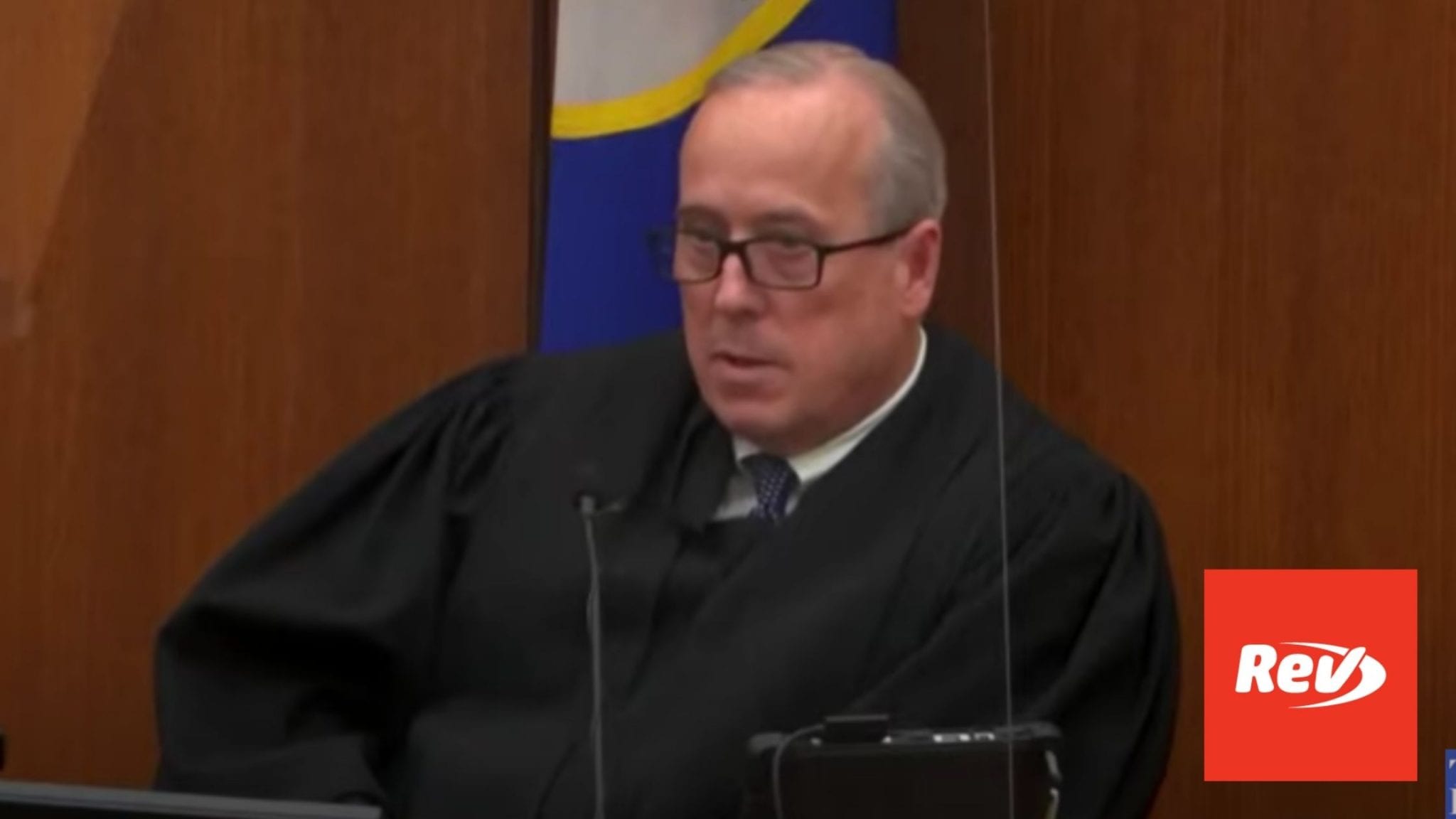 Judge Cahill said, “I’ll give you that Congresswoman Waters may have given you something on appeal that may result in this whole trial being overturned,” during Derek Chauvin’s trial on April 19, 2021. Read the transcript of the remarks here.

Judge Peter Cahill: (00:00)
All right. With regard to other matters we have, I think there are some bench conferences that are fairly historical that you wanted to memorialize, but also a new motion based on events this weekend. Mr. Nelson.

Mr. Nelson: (00:13)
Correct, Your Honor. Your Honor, as the court is aware, prior to coming into court this morning for our closing arguments, we had in chambers discussion about events of this weekend, specifically referencing that an elected official, a United States Congressperson, was making what I interpreted to be and what I think are reasonably interpreted to be, threats against the sanctity of the jury process, threatening and intimidating a jury, demanding that if there’s not a guilty verdict that there would be further problems, Your Honor. And given the fact that this jury has not been sequestered, it has been my position all along throughout the course of this case that this jury should have been sequestered at the outset, the jury has not been continually told to stay away from media, only media, about this case.

Mr. Nelson: (01:15)
There is a high probability that members of this jury have seen these comments, are familiar with these comments, and things that have happened throughout the course of this trial. I mean, it’s unfortunate that there was another situation that occurred during the course of this trial, but obviously, Your Honor, we also, as I mentioned previously too, one of the jurors does live in the city Brooklyn Center, as I recall.

Judge Peter Cahill: (01:41)
Although I think that is the alternate we just dismissed.

Mr. Nelson: (01:48)
I’d have to go back and double check my notes. Your Honor, I mean, I just think that the sum total of this trial happening in such a public context, number one, number two, the media attention is profound. I have admittedly stayed away from 99% of it, but that has required me to stay away from all media. I mean, this case has found its way into even fictional television, Your Honor. I was advised of two television shows during the course of the past few days that specifically involve references to this particular case and the reactions of the characters in these stories to this particular case. This jury despite all best efforts has been bombarded with information relevant to this case. It is impossible to stay away from it unless you literally shut off your phone or you shut off your TV, you shut off your computer. And no such instructions have been given during the course of this trial.

Mr. Nelson: (02:58)
Right. But if can’t even watch your favorite Thursday night television program and it comes up, I mean, this is the problem, and why I have felt that this jury should have been sequestered from the very beginning.

Mr. Nelson: (03:13)
Just to make that clear. And so I had moved based on that this, again, for a mistrial. The idea is that it is a public trial, I think the court has accomplished that, but the media attention is so profound. I mean, it’s such a modern problem to have where literally I walked from this courtroom into the courtroom where I have been permitted to stay, during the course of this trial, I’ve received literally thousands and thousands and thousands of emails, so much so that I don’t even look at that particular email anymore. But my phone gives me alerts on things that just happened. I mean, you can’t avoid it. And it is so pervasive that I just don’t know how this jury can really be said to be that they are free from the taint of this. And now that we have U.S. Representatives threatening acts of violence in relation to this specific case, it’s mind boggling to me, Judge.

Judge Peter Cahill: (04:29)
Well, I’ll give you that Congresswoman Waters may have given you something on appeal that may result in this whole trial being overturned. But what’s the state’s position?

Speaker 3: (04:38)
Your Honor, the state’s position, first and foremost, and this is a concern I raised at the beginning of the proceedings, well into jury selection, is that we can’t allow statements like these vague statements to be considered a part of the record on appeal. If there’s a specific statement that a specific U.S. Representative made, then there needs to be some formal offer of proof with the exact quotes of the exact statement or some kind of a declaration. And I’m sure Mr. Nelson can do that if he thinks that that’s something that’s appropriate. I don’t know that this particular Representative made a specified threat to violence. I don’t know what the context of the statement is. I also don’t know what television shows Mr. Nelson is referring to in terms of any of this. And so I just don’t think that we can muddy the record with vague allegations as to things that have happened without very specific evidence that’s being offered before the court,

Speaker 3: (05:41)
As a practical matter, through the jury selection process, the court has provided instructions, has determined whether or not there are any outside influences. The law presumes that the jury follows the judge’s instructions and the court instructed the jury, instructed the jury today, that they’re not to let any outside influences or public opinion sway their deliberation, and the law presumes that they would be capable of doing it. And so without any specific offer of proof or information in the record without any specific evidence that this particular jury was influenced in any particular way, I believe that the defendant’s motion should be denied.

Judge Peter Cahill: (07:02)
Yeah, you can supplement the record with whatever media reports. I’m aware of the media reports. I’m aware that Congresswoman Waters was talking specifically about this trial and about the unacceptability of anything less than a murder conviction and talk about being confrontational. But you can submit the press articles about that. This goes back to what I’ve been saying from the beginning. I wish elected officials would stop talking about this case, especially in a manner that is disrespectful to the rule of law and to the judicial branch and our function. I think if they want to give their opinions, they should do so in a respectful and in a manner that is consistent with their oath to the Constitution, to respect a co-equal branch of government.

Judge Peter Cahill: (07:48)
Their failure to do so I think is abhorrent, but I don’t think it has prejudiced us with additional material that would prejudice his jury. They have been told not to watch the news, I trust they are following those instructions and that there is not in any way a prejudice to the defendant beyond the articles that we’re talking specifically about the facts of this case. A Congresswoman’s opinion really doesn’t matter a whole lot.