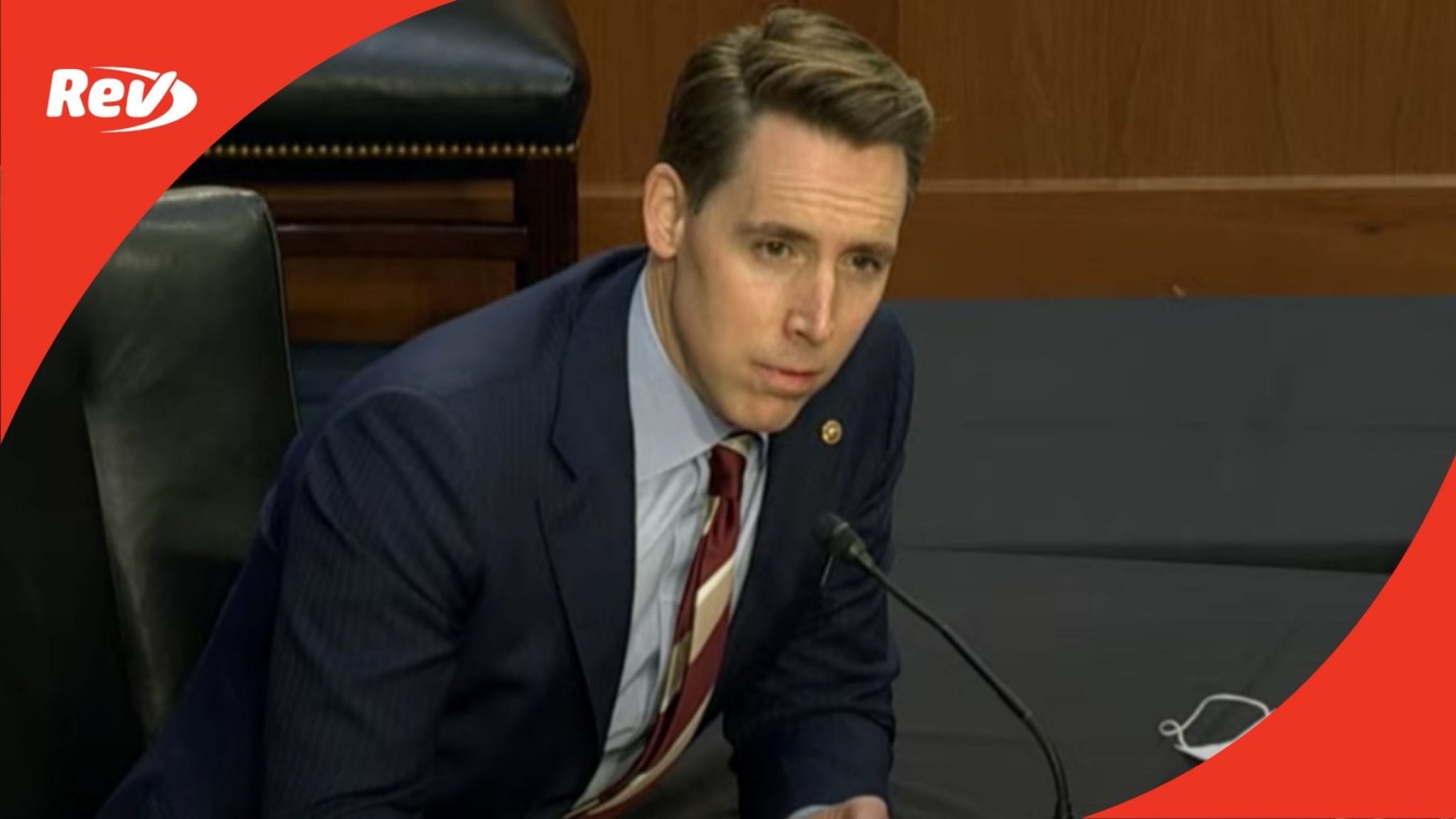 Sen. Josh Hawley questioned FBI Director Chris Wray on the use of geolocation data to track the rioters at the US Capitol on January 6. Read the transcript of their remarks during the congressional hearing on March 2, 2021.

Senator Josh Hawley: (00:00)
Mr. Chairman, Director Ray, thanks for being here. Can I just go back to a series of questions that Senator Lee asked you. He asked you about the geolocation and metadata aspects and gathering related to the gathering of metadata that is related to your investigation into the January 6th riot. You said you weren’t familiar with the specifics. Can I just clarify your responses to him? So, when you say you’re not familiar, are you saying that you don’t know whether or not the Bureau has scooped up geolocation data metadata from cell phone records for cell phone towers? Or, do you not know, or are you saying that the Bureau maybe, or maybe hasn’t done it? Just tell me what you know about this.

Hon. Christopher A. Wray: (00:41)
So, when it comes to geolocation data specifically, again, not in a specific instance, but just even the use of geolocation data, I would not be surprised to learn, but I do not know for a fact that we were using geolocation data under any situation with connection with the investigation of the 6th. But again, we do use geolocation data under specific authorities and specific instances, because this is such a sprawling investigation, that would not surprise me. When it comes to metadata, which is a little bit different obviously than geolocation data, I feel confident that we are using various legal authorities to look at metadata under a variety of situations. But again, the specifics of when, under what circumstances, with whom, that kind of thing, I’m not in a position to testify about with the sprawl and size of the investigation, and certainly not in a Congressional hearing.

Hon. Christopher A. Wray: (01:44)
Well, we have various forms of legal process we can serve on companies that will allow us to get access.

Hon. Christopher A. Wray: (01:51)
We’re using a lot of legal process in connection with the investigation, so yes.

Senator Josh Hawley: (01:55)
But specifically, serving process on companies using invoking your various legal powers to get that data from companies, that’s been done in the case of gathering this data?

Hon. Christopher A. Wray: (02:10)
Again, I don’t know the specifics, but I feel confident that has happened, because metadata is often something that we look at, and we have a variety of legal tools that allow us to do that under certain circumstances.

Senator Josh Hawley: (02:21)
What about the cell tower data that was reportedly scooped up by the Bureau on the day, during, in fact while the riot was underway? What’s happened to that data? Do you still have it, has it been retained? Do you have plans to retain it?

Hon. Christopher A. Wray: (02:39)
Again, whatever we’re doing with cell phone data, I’m confident that we’re doing it in conjunction with our appropriate legal tools, and working with-

Senator Josh Hawley: (02:47)
Here’s what I’m trying to get at, and I think it’s what Senator Lee was trying to get at. How are we going to know what you are doing with it, and how are we going to evaluate the Bureau’s conduct if we don’t know what authorities you’re invoking, what precisely you’re doing, what you’re retaining? You said to him repeatedly, you weren’t familiar with the specifics. You’ve now said it to me. I don’t know. I’m not sure how this Committee is supposed to evaluate anything that the Bureau is doing. You’re basically saying, “Just trust us.” How are we going to know? Do we have to wait until the end of your investigation to find out what you’ve done?

Hon. Christopher A. Wray: (03:18)
Well, certainly I have to be careful about discussing an ongoing investigation, which I’m sure you can appreciate. But, all the tools that we have are done in conjunction with prosecutors and lawyers from the Justice Department. Now, if there’s information we can provide you before an investigation is completed, that goes through what some of the authorities we have, the tools we have, etc., we could probably provide some information like that, that might be useful to help answer the question.

Senator Josh Hawley: (03:48)
That would be helpful. Thank you. I’ll hold you to that. Let me ask you about some of the things that have been reported in the press. Particularly, there’ve been a series of reports that the Bureau has worked with banks in the course of the investigation, into the January 6th riot, and both before and after. And that some banks, in particular Bank of America, may have handed over data for 200-plus clients who may have used their credit or debit cards to make purchases in the DC area. What do you know about this? Has Bank of America voluntarily turned over information to the Bureau about its customers?

Senator Josh Hawley: (04:22)
And so, has the FBI requested similar information from any other companies, to your knowledge?

Hon. Christopher A. Wray: (04:28)
Again, sitting here right now, I do not know the answer to that question. I do know that we work with private sector partners, including financial institutions, in a variety of ways all the time, in a variety of investigations. But exactly the specifics of what may or may not have happened here, that I don’t know, sitting here as we’re talking today.

Senator Josh Hawley: (04:48)
As I’m sure you can appreciate, my concern here is that 12 USC 3403s prohibits financial institutions from turning over confidential client records. Unless of course, they’ve got reasonable suspicion that there’s a crime being committed. Now, the news reports on this have indicated that financial institutions were doing this in cooperation with the Bureau, without any such indication of a crime. They’re just turning over reams of consumer data. That obviously would be a major legal problem, and major legal concern. Can you try and get me some answers to these questions? I appreciate you say, you don’t know today, you’re not aware of what’s going on. But can you look into this and follow up with me on this?

Hon. Christopher A. Wray: (05:25)
I’d be happy to see if there’s more information we can provide you on the subject. As I said, we have a variety of ways in which we engage with financial institutions, in particular. And as you referenced, there’s a number of legal authorities that describe when you can and cannot do that and how that’s supposed to work. So I don’t want to get out, as they say, over my skis and try to characterize what may have happened in this specific instance, but I’m happy to look into it and see if there’s more information we can provide.

Senator Josh Hawley: (05:50)
What about some of the technology companies, Facebook, Google, Twitter, Apple, Amazon? Has the FBI had contacts with those tech platforms following the events of the 6th?

Hon. Christopher A. Wray: (06:01)
We’ve certainly had contact with a number of the social media companies in connection with the 6th. So that much, I know.

Senator Josh Hawley: (06:09)
Has the Bureau sought to compel any of those companies to turn over user data related to the 6th?

Hon. Christopher A. Wray: (06:15)
Well, again, I can’t tell you the specifics here, but what I will tell you is that we feel certain that we have served legal process on those companies, which we do with some frequency, and we have received information from some of those companies. And whether that’s true of every single one of the companies you listed, I can’t say for sure, but I suspect it is because we work with social media companies quite a lot.

Senator Josh Hawley: (06:40)
Are you aware of any of the companies voluntarily turning over data to the Bureau in relationship to the events of the 6th?