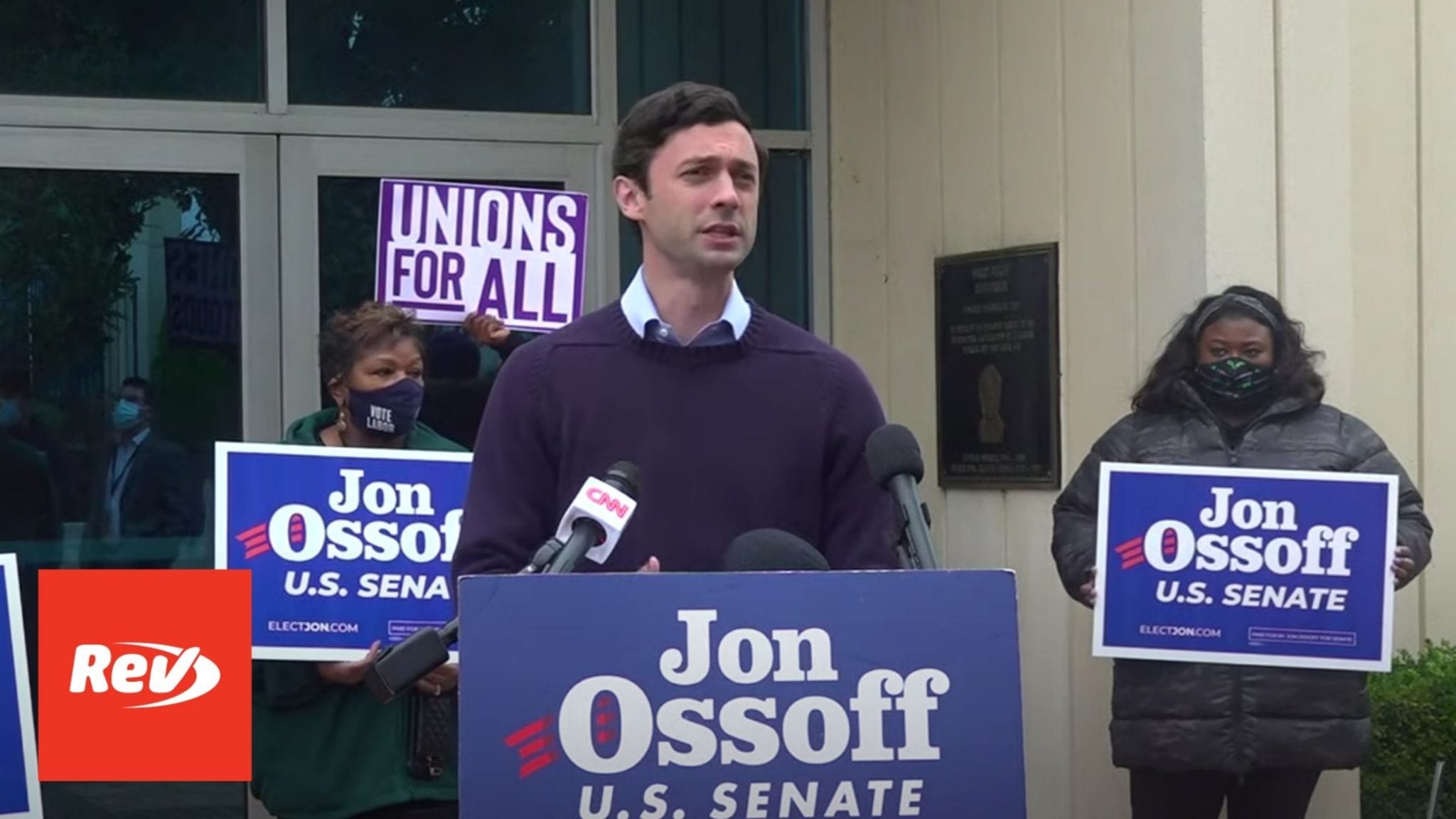 Georgia Senate Candidate Jon Ossoff held a press conference on November 30 to address “a pattern of misconduct and self-dealing” by his opponent Senator David Perdue. Read the transcript of the news briefing speech here.

Jon Ossoff: (03:06)
Thanksgiving Day, Reverend Warnock and I were at Hosea Feeds The Hungry to help families here in Georgia that are having trouble putting food on the table to feed themselves during this Thanksgiving. There are a lot of people suffering in our state and in our country right now. This is a really tough time for families and businesses. And our Senator, while he’s been blocking desperately needed financial relief for ordinary working people here in Georgia and for businesses, has been using his office to enrich himself. Last week, reporting by the Associated Press, The New York Times, The Daily Beast, has revealed not just one incident, but a pattern of misconduct and self-dealing by Senator David Perdue.

Jon Ossoff: (04:07)
He aggressively traded stocks in the financial services industry while he sat on the Banking Committee, as he took the chairmanship of the C power sub-committee for the Senate Armed Services Committee, he was trading stock in a defense contractor to which he then directed taxpayer dollars before cashing out at a profit. He was dumping shares in Cardlytics in January after what appeared to be private conversations with senior executives of that company. And as we know, he was buying shares in manufacturers of vaccines and medical equipment and dumping his casino shares while he had access to classified briefings on COVID-19 and was claiming in public that this disease was no deadlier than the flu.

Jon Ossoff: (05:00)
And most revealing of all, in what’s come out in the last week, is that Senator Perdue has been lying to the public and to you, members of the press, for the last year about his financial misconduct, because Senator Perdue has repeatedly claimed that he doesn’t control his day-to-day stock trades. But federal agents secured banking records, which revealed that Senator Perdue did in fact personally instruct stock trading. So for a Georgia Senator to be profiting from a pandemic about which he is lying in public, downplaying the risks while he trades medical stocks, and then lying to the people about his own financial misconduct, is totally unacceptable.

Jon Ossoff: (05:53)
The truth is Senator Perdue did direct his investments personally. So every time he has said he’s not personally responsible for profiting from this pandemic, he’s been lying to you. Perdue’s misconduct is repeated and flagrant and now he’s been exposed, lying to the public and to the press about this misconduct. Senator Perdue has total control over his own stock portfolio. He refuses to this day to place his assets in a blind trust. He was exchanging emails personally about the details of his investment. And he was personally calling up his stock broker to play stock trades. So Senator Perdue needs to come out of hiding and answer some questions.

Jon Ossoff: (07:30)
And he needs to answer what other stock trades he personally directed after attending confidential briefings on the threat of COVID-19 in the early months of this pandemic. Let me just make this final point before I answer questions. This is not just about Senator Perdue’s personal misconduct and his lying about his financial dealings. It’s about the fact that he’s been holding up relief for the very people he serves while enriching himself in office, opposing $1,200 stimulus checks for ordinary working Georgians, obstructing long overdue financial relief for Georgians since mid-summer, that’s been awaiting passage by the US Senate while he’s been looking after himself. So thank you for being here and I’m happy to answer your questions and Miriam will call upon members of the press. Yes.

Jon Ossoff: (08:32)
Well, the standard for conduct for a US Senator needs to be higher than that he wasn’t criminally prosecuted. This conduct is obviously deeply unethical and his lies all year, that he doesn’t personally direct his stock trades, have been exposed as lies. I mean, I would ask members of the press who are here, how many of you have been told by Senator Perdue or his spokespeople, indignantly, that he doesn’t place his own trades? They’ve been lying to you. We have to have a higher bar for those who represent us in office that they avoided indictment for conduct that is obviously unethical. Thank you for the question.

Jon Ossoff: (09:32)
Because this is about the human stakes of this election. This is about, for example, the direct economic relief that Senator Perdue has been obstructing while looking after his own stock portfolio. We all know what will happen if Mitch McConnell maintains control of the Senate, it will be paralysis and gridlock in Washington at a moment when thousands of Americans are dying per day and millions of families and jobs and livelihoods are at risk because the paralysis in Washington right now, and the obstructionism of Senators like David Perdue is preventing financial relief from flowing through the people. The stakes are very high in the midst of this crisis. And I think that Georgia voters recognize that the capacity of this incoming administration to govern and to enact legislation to lead us out of this crisis depends upon victory here.

Jon Ossoff: (10:43)
On day one, I will place my stock portfolio in a blind trust. Senator Perdue still refuses to do this, by the way. Even after all of this, Senator Perdue still refuses to give up control of his stock portfolio and he’s been lying to the public and the press about his personal day-to-day control of that stock portfolio, because we now know that he’s been personally directing stock trades and yeah, my belief and I’ll introduce legislation to ban members of Congress from trading individual stocks. This is unethical, it’s a huge conflict of interest. And it’s part of this deeper corruption in Washington that we have to root out. Thank you. 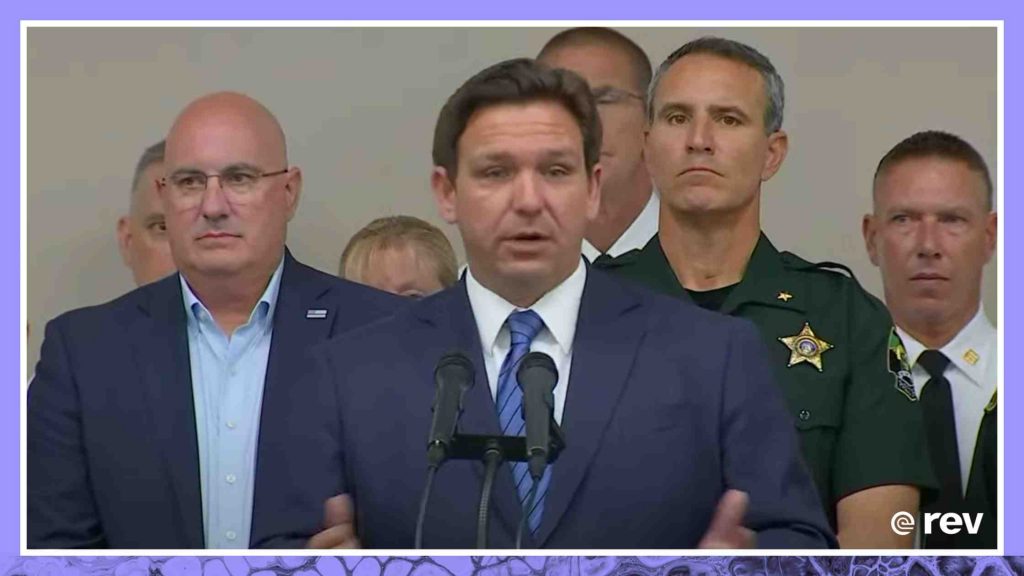