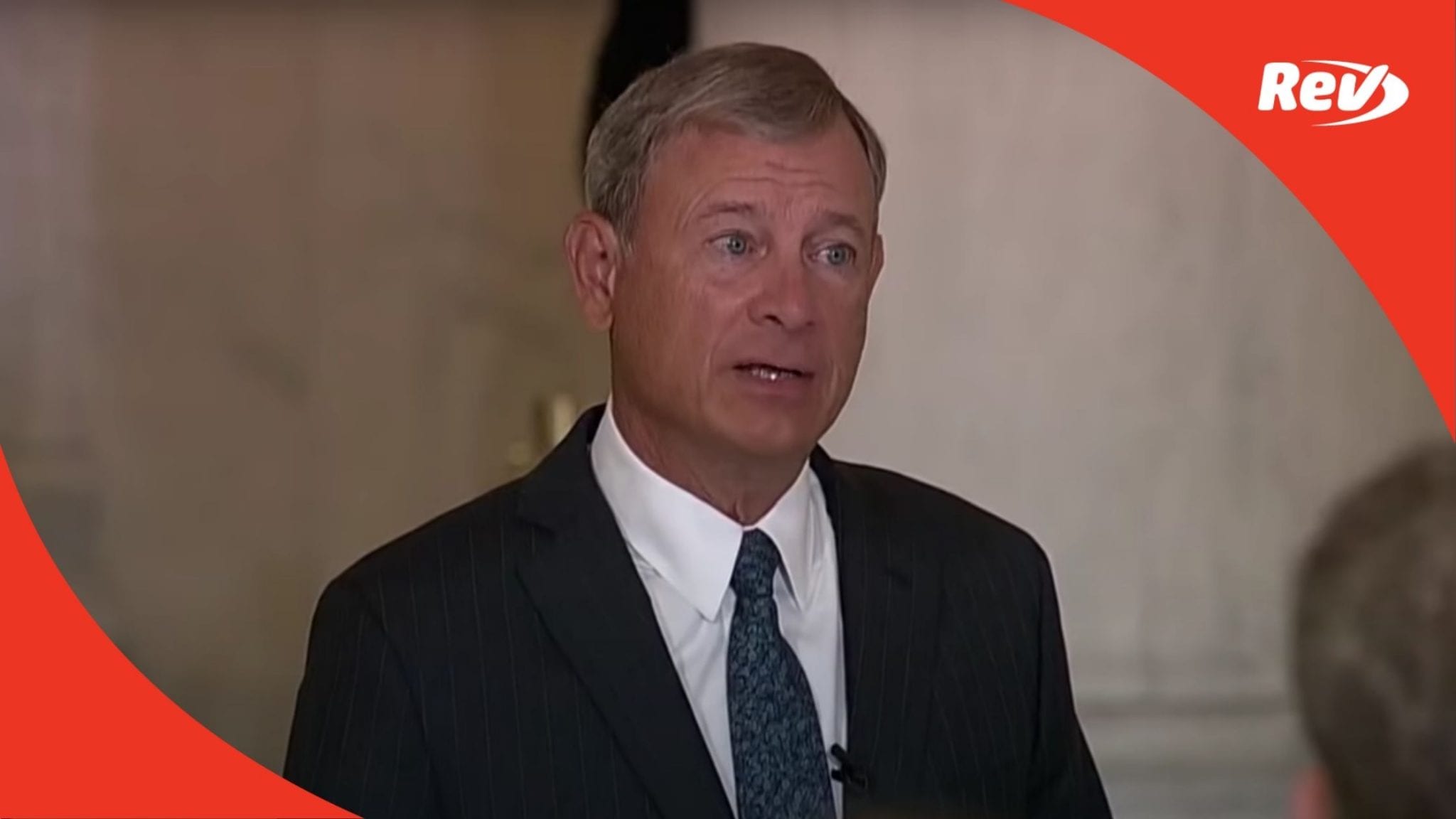 Chief Justice John Roberts gave remarks about Justice Ruth Bader Ginsburg during a memorial service on September 23. “When she spoke, people listened,” he said. Read the transcript of his speech here.

Chief Justice John Roberts: (00:06)
Thank you, Rabbi Holtzblatt, for those compelling words. Jane, Jim, the entire Ginsburg family, on behalf of all the justices, the spouses of the justices and the entire Supreme Court family, I offer our heartfelt condolences on the loss of Ruth Bader Ginsburg. That loss is widely shared, but we know that it falls most heavily on the family. Justice Ginsburg’s life was one of the many versions of the American dream. Her father was an immigrant from Odessa, her mother was born four months after her family arrived from Poland. Her mother later worked as a bookkeeper in Brooklyn. Ruth used to ask, “What is the difference between a bookkeeper in Brooklyn and a Supreme Court Justice?” Her answer, one generation. It has been said that Ruth wanted to be an opera virtuoso, but became a rockstar instead. But she chose the law. Subjected to discrimination in law school and the job market because she was a woman, Ruth would grow to become the leading advocate, fighting such discrimination in court.

Chief Justice John Roberts: (01:28)
She was not an opera star, but she found her stage right behind me in our courtroom. There, she won famous victories that helped move our nation closer to equal justice under law to the extent that women are now a majority in law schools, not simply a handful. Later, she became a star on the bench where she sat for 27 years. Her 483 majority concurring and descending opinions will steer the court for decades. They are written with the unaffected grace of precision. Her voice in court and in our conference room was soft, but when she spoke, people listened. Among the words that best describe Ruth, tough, brave, a fighter, a winner, but also thoughtful, careful, compassionate, honest. When it came to opera, insightful, passionate. When it came to sports, clueless. Justice Ginsburg had many virtues of her own, but she also unavoidably promoted one particular one, humility in others.

Chief Justice John Roberts: (02:45)
For example, on more than a few occasions, someone would approach or call me and describe some upcoming occasion or event that was important to them, and I knew what was coming, could I come and speak? But no. Instead, could I pass along an invitation to Justice Ginsburg and put in a good word? Many of you have seen the famous picture of Justice Scalia and Justice Ginsburg riding a top and elephant in India. It captured so much of Ruth. There she was doing something totally unexpected just as she had in law school, where she was not only one of the few women, but a new mother to boot. And in the photograph, she is riding with a dear friend, a friend with totally divergent views. There is no indication in the photo that either was poised to push the other off. For many years, of course, Ruth battled serious illness.

Chief Justice John Roberts: (03:48)
She met each of those challenges with a combination of candid assessment and fierce determination. In doing so, she encouraged others who have their own battles with illness, including employees here in the court. And she emerged victorious time and again against all odds. But finally the odds went out and now Ruth has left us. I mentioned at the outset that Ruth’s passing weighed most heavily on her family and that is true. But the court was her family too. This building was her home to. Of course, she will live on in what she did to improve the law and the lives of all of us. And yet still, Ruth is gone and we grieve. Let us have a moment of silence for reflection.