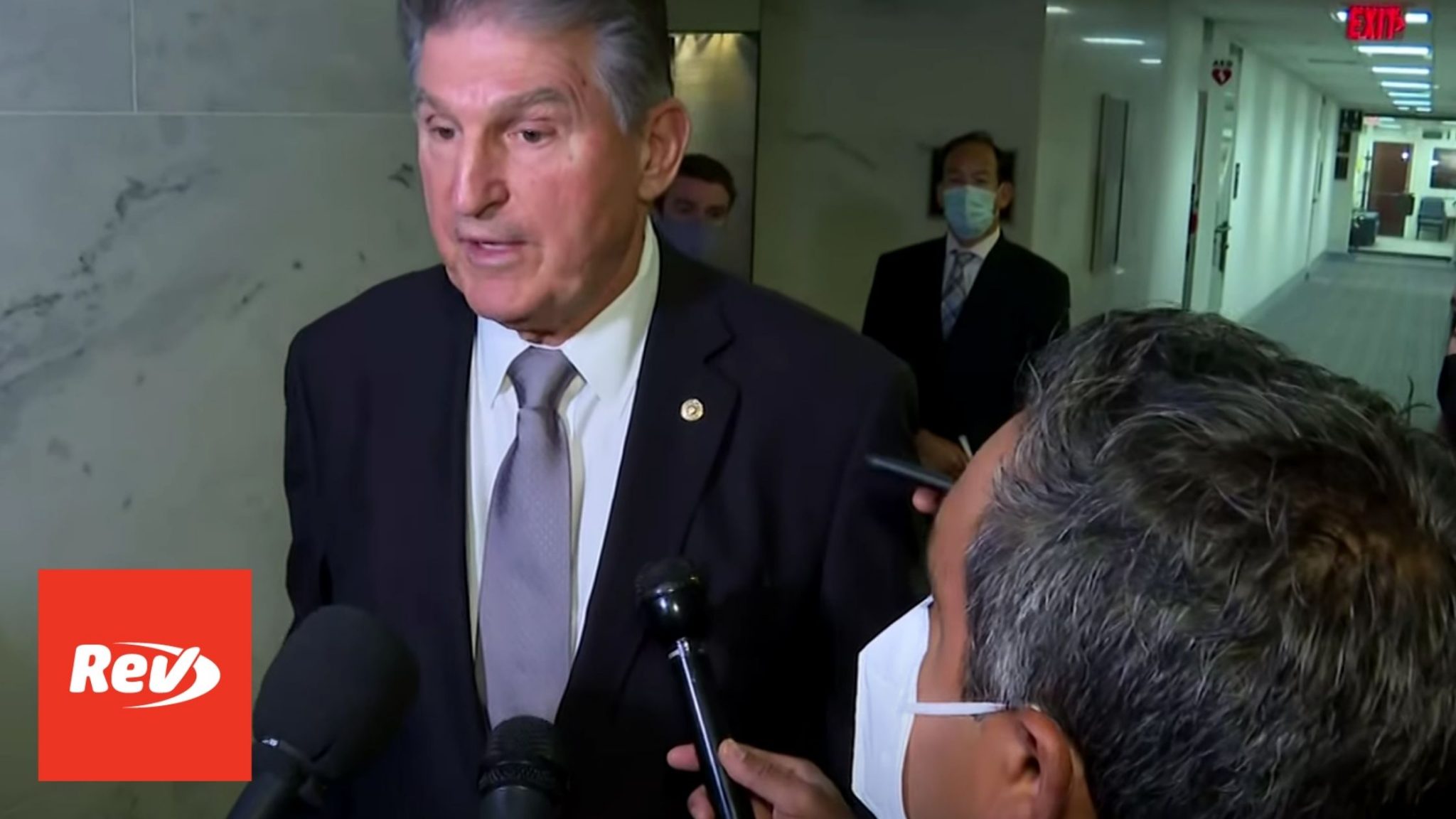 Senator Joe Manchin said the “unbelievable” Republican victories in Virginia’s election validate his concerns over the infrastructure bill. Read the transcript of his remarks to the press here.

Speaker 2: (00:01)
What’s your reaction to the election results last night?

Joe Manchin: (00:07)
You want me to just talk about the reaction to that. It’s just unbelievable, when I see the country’s as divided as it is right now, when you see a blue state such as New Jersey, who we considered a blue state, and have over 2.2 million votes being cast and they’re down to just maybe less than 100 that separates them. It’s unbelievable to see what went on in Virginia and then not just from the governor’s race, but all the way down that ticket. A good bit of changes happened. I think that we need to work together. That’s all. We just need to come together, which I’ve been preaching forever. Let’s start looking and working together, listening to our people back home. I’ve been listening to the people in West Virginia. They’re concerned about inflation. They really have been for a long time.

Joe Manchin: (00:49)
And they talk to me. They say, “I go to the grocery store and it takes me $30 more to buy what I did six months ago, and I go to the filling station to drive to go to work, and I’m spending $20 more to fill up the tank or more.” These are concerning them. They know that the higher utility bills are coming at them this winter, and we need to be cognizant of that. We just can’t just say, “Well, we can do this, this and this, and they’ll take care of it.” We better be very careful what we’re doing.

Speaker 2: (01:12)
The Speaker just announced four weeks of paid leave is back in.

Speaker 3: (01:15)
House Democrats have just put paid leave four weeks back into their bill. Is that something you support?

Joe Manchin: (01:25)
Well, that’s a challenge, very much of a challenge, and they know how I feel about that.

Speaker 3: (01:28)
But yesterday you said you support paid leaves, so I’m just confused about where-

Joe Manchin: (01:32)
I sure do. I just don’t support unpaid leave. That means getting more debt and basically putting more social programs that we can’t pay for that we’re having problems now. I want to support paid leave. I want to do it in a bipartisan way. I’ve talked to Susan Collins. I’ve talked to colleagues on both sides. We both agree something can be done. Let’s do that in the proper … We’re trying to force it through reconciliation, which has guardrails and rules and regulations. Let’s do it and do it right, and not do it in this.

Speaker 3: (01:56)
I’m just confused. The objection then on reconciliation is because of the carve out on Social Security?

Joe Manchin: (02:02)
I have no idea what else, what’s coming from the House, and I’ve told them the House needs to really truly pass the infrastructure bill. That’s something that’s proven, because the people know what’s in it. The states have been advised of what they’re going to get done. And in my state, I just gave a speech that $6 billion comes to the state of West Virginia, fixes my roads and bridges and fixes internet services, water and sewer, airports, all these things. That’s what they really want. And on the other stuff that’s coming from the House, they’re going to do what the House does, and we expect that, and we’ll start working it deliberately through the Senate.

Speaker 4: (02:33)
Senator Manchin, do you think that workers should be paying into a paid leave program, like-

Joe Manchin: (02:38)
Absolutely. I think it should be participation. I always felt that. I think that basically employer and employees should participate. We have states around this country doing it now, and we have countries around the world doing it. And it seems to work very well and does not put a burden on anybody, but a person knows what they have and what they can use and how they can use it when they want it.

Speaker 2: (02:57)
Senator, just based on what you saw last night, do you think voters were sending the message that your party should pare back on the very progressive policies that they’re pushing right now?

Joe Manchin: (03:08)
I’m not going to speak on the message that was sent. I just think that the message was really saying if we’re going to do something, let’s take time and do it right. Let’s make sure that people know what’s in it. And I’ve said that before. Sometimes the, and it’s not intentionally the game’s being played. It’s the way the system is very convoluted. People need to know that what we’re getting for it, what you’re going to expect, how much you’re going to pay for it and go on and on and on, but we’re talking about revamping the whole entire tax code. That’s mammoth, totally. We’ve had no hearings, no open hearings. You haven’t been able to sit and listen to a hearing. None of us have. And the people definitely don’t, and they’re scared to death.

Speaker 5: (03:47)
Some Democrats think you should have moved faster though. That’s their argument.

Joe Manchin: (03:50)
I understand that. I really do. We just have a difference of agreement on that.

Speaker 3: (03:55)
So is it your position that paid leave, there’s no place for it in the reconciliation bill?

Joe Manchin: (03:59)
I just think it’s the wrong place to put it because it’s a social expansion. And right now I’ve said very clearly that social expansion, especially on any of these, when you have deficits, you’re looking at insolvency, such as in Medicare and Social Security. And those are lifelines to people in most rural states, but definitely in West Virginia. That’s their lifeline, and now we’re talking about expanding something we can’t even pay for now. They want keep what they have. And I think those are all aspirational. Let’s get our financial house in order and then be able to tackle all of these.

Speaker 2: (04:32)
Senator, in Virginia, Independents swung to Glenn Youngkin compared to 2020. What does that say about concerns you think voters might have about inflation or the scope of the BBB package, some of the things you’ve raised?

Joe Manchin: (04:45)
You can read so much into all that last night. I mean, I think it should be a call that all of us have to be more attentive to the people back home. And I’ve been trying to do that from day one. And I’ve been saying this for many, many months. People have concerns. People are concerned. They very much so. And for us to go down a path that we’ve been going and they were trying to accelerate it and it has been slowed down, I think that we need to take our time and do it right. So you can read anything you want out of it. The bottom line is-

Joe Manchin: (05:13)
We have a divided country. It needs to be united. And you can’t unite it by just doing about a one party system.

Speaker 2: (05:19)
Do you think the White House has been listening to that message?