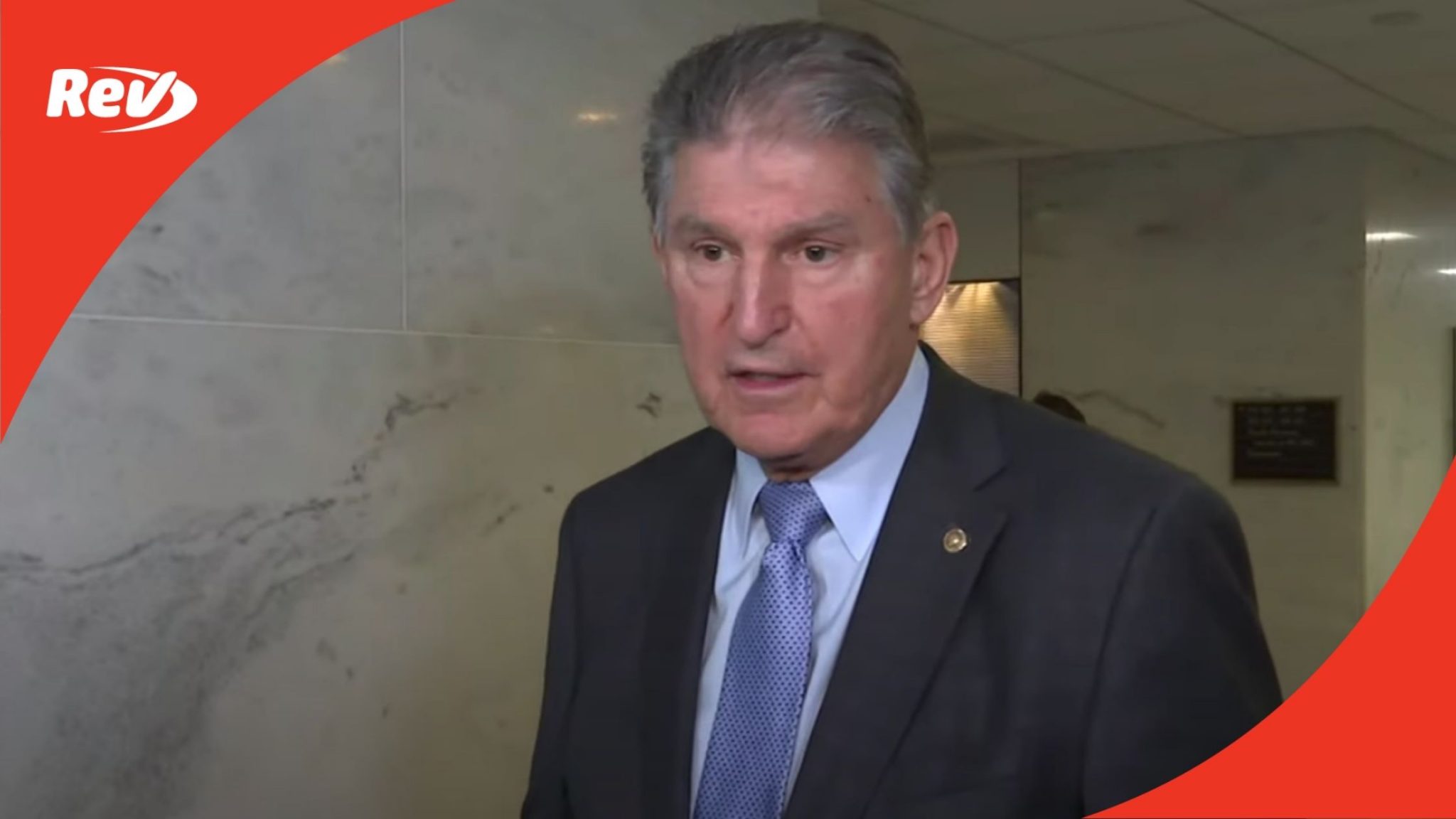 Senator Joe Manchin spoke to the press about negotiations on the infrastructure bill and his meeting with President Biden and Senator Kyrsten Sinema on October 27, 2021. Read the transcript of the remarks here.

Speaker 1: (00:01)
Senator, you met at the White House last night. You talked to the president. After your discussion with him, how realistic is it that the deal can be reached imminently even as early as today, including on a billionaires tax?

Joe Manchin: (00:20)
Absolutely can be. When I say a deal, we need to move forward. The president has made that very clear. He wants to move forward and we owe it to the president to move forward. Take a vote on the infrastructure builder, the only thing we have is bipartisan. Take a vote on that because the president is doing everything, he’s working 24/7. I guarantee you I’ve been with him most 24/7, and he’s working as hard as he possibly can to get a good, solid deal. He believes a hundred percent of nothing is nothing. He understands that. He’s been here 36 years. He understands how the Senate works. We had very good, very direct, very frank, very honest conversations. On the taxes, people talking about tax this and tax that. We’ll change this and wealth tax.

Joe Manchin: (01:02)
First of all, I said this, everybody in this country that has been blessed and prospered should pay a patriotic tax. If you’re to the point to where you’re able to use all of the tax forms, if you can, to your advantage and you end up with a zero tax liability, but have had a very, very good life, and you’ve had a lot of opportunities, there should be a 15% patriotic tax. That’s me speaking. I’m not speaking for anybody else, but we’ve said and we’ve all agreed on a 15% corporate tax. Well, people in the stratosphere rather than trying to penalize, and we ought to pleased this country’s able to produce the wealth. But with that, there’s a patriotic duty that you should be paying something to this great country to give you the protection and the support and the opportunities. That’s called a patriot. Patriotic tax would be nothing that we should be scorned about. Doesn’t harm anybody.

Joe Manchin: (02:01)
I’m supporting basically that everyone should pay their fair share, and I’ve just try to think of it. I don’t like the connotation that we’re targeting different people. There’s people that basically they’ve contributed to society, that create a lot of jobs and invest a lot of money and give a lot to philanthropic pursuits. But it’s time that we all pull together and rode together if you [inaudible 00:02:24].

Joe Manchin: (02:31)
There’s a lot going on with that it’s very convoluted. I believe there’s going to be, everyone’s going to pay. I believe that we will end up where everyone must participate.

Speaker 4: (02:41)
All these tax places, like the billionaires tax are coming in very, very last minute. It seems to be a rush. How comfortable-

Speaker 4: (02:48)
How comfortable are you that you can pay for the whole package?

Joe Manchin: (02:51)
We’re not doing everything today. We’re not going to have a complete… The Senate’s going to take time. You think it’s going to happen today in the Senate. We’re basically trying to agree to a framework and the president’s been very clear. He’ll go over to the house and he’ll basically explain to the house, that, “I have a framework, but there’s still an awful lot of work to be done.” We’re going to have something happening. You have to trust the president’s getting everything he has to make this happen. He’s trying to meet everybody halfway. I appreciate that because I’ve been through negotiations. I can tell he has given everything he has to this. People have to respect that. Only thing we’re asking for is vote on a piece of legislation that’s already been bipartisan. I’ll guarantee, I’m doing in good faith. I’m meeting with people I’ve never had, and I really enjoy, I’ve never had the opportunity to know him before. We can sit down and work something out. Give us a chance.

Speaker 5: (03:46)
Senator Sanders has said that Medicare expansion is not going to come out of this bill. Do you still disagree with that?

Joe Manchin: (03:55)
Let me just say about expansions and we’re negotiating and talking about that. I am truly, absolutely concerned about the deficit of our country at 20, almost $29 trillion. I’m concerned about the insolvency of the trust funds. In good conscious, I have a hard time increasing basically benefits, which all of us can agree that, oh, I love to have this, love to have that, when you can’t even take care of what you have. That’s the difference and that’s the discussions we’re having. Those are honest, open discussions. How am I going to tell people in West Virginia that Medicare and social security is your lifeline, and you’re going to be in trouble by 2026. They’ve all heard that. What’s that mean to me? Am I going to pay more or am I going to be cut back on my services I’m getting? But yet we’re adding more to it. That’s the problem. That’s basically a good dialogue that we’re having. It’s honest, open discussion.

Speaker 5: (04:52)
Senator, are you meeting this morning with President Biden?

Joe Manchin: (04:56)
I’m not meeting with President Biden this morning or today that I know of. I didn’t know I was with him last night either, but you know things can happen. If he asked to meet, I’ll be there. No, I’m not. I’m having meetings this morning, but not [inaudible 00:05:07].

Joe Manchin: (05:13)
We’re looking all that because there’s an awful lot of things we want to do as far as incentives to accelerate clean energy. Clean energy means use what you’re using cleaner, making sure that the rest of the world, that’s not doing anything that we’re doing. People keep talking about energy. Only thing I want to say is, look at the facts. We are the only nation that’s reduced our dependency on coal. We’ve gone from 52% to 19%. We get no credit. We’ve done all these things. We have a technology to capture the methane, let us build a pipeline to take the methane off. Don’t use it as an oxymoron. All these things we’re talking about, but also we can accelerate transmission, ceramics of transmission. We can accelerate storage for renewables. We can accelerate all of those things. That’s what we are trying to do. Get a good piece of legislation. Throwing money right now is something that basically does not have a pathway to be completed. It’s [crosstalk 00:06:05].

Speaker 1: (06:14)
Paid leave, are you still talking to Senator Gillibrand?

Joe Manchin: (06:16)
I’m talking to everybody, but I’ve been very clear. To expand social programs when you have trust funds that aren’t solvent, they’re going insolvent, I can’t explain that. It doesn’t make sense to me. I want to work with everyone as long as we can start paying for things. That’s all. I can’t put this burden on my grandchildren. I’ve got 10 grandchildren and I just can’t do. It

Speaker 1: (06:38)
[crosstalk 00:06:38] has the president indicated that he’s willing to move towards you, to not go forward Medicare expansion?

Joe Manchin: (06:44)
No. The president made no guarantees. Only thing the president of the United States and I’ll say this again. We’ve got the right person at the right place at the right time. Let’s work with him. The bottom line is he understands and, and I think all he’s asking for is continue to deal in good faith and we’ll get to where we get to and we’ll vote it up or down. That’s what [crosstalk 00:07:04].

Speaker 1: (07:04)
What if the house delays infrastructure vote?