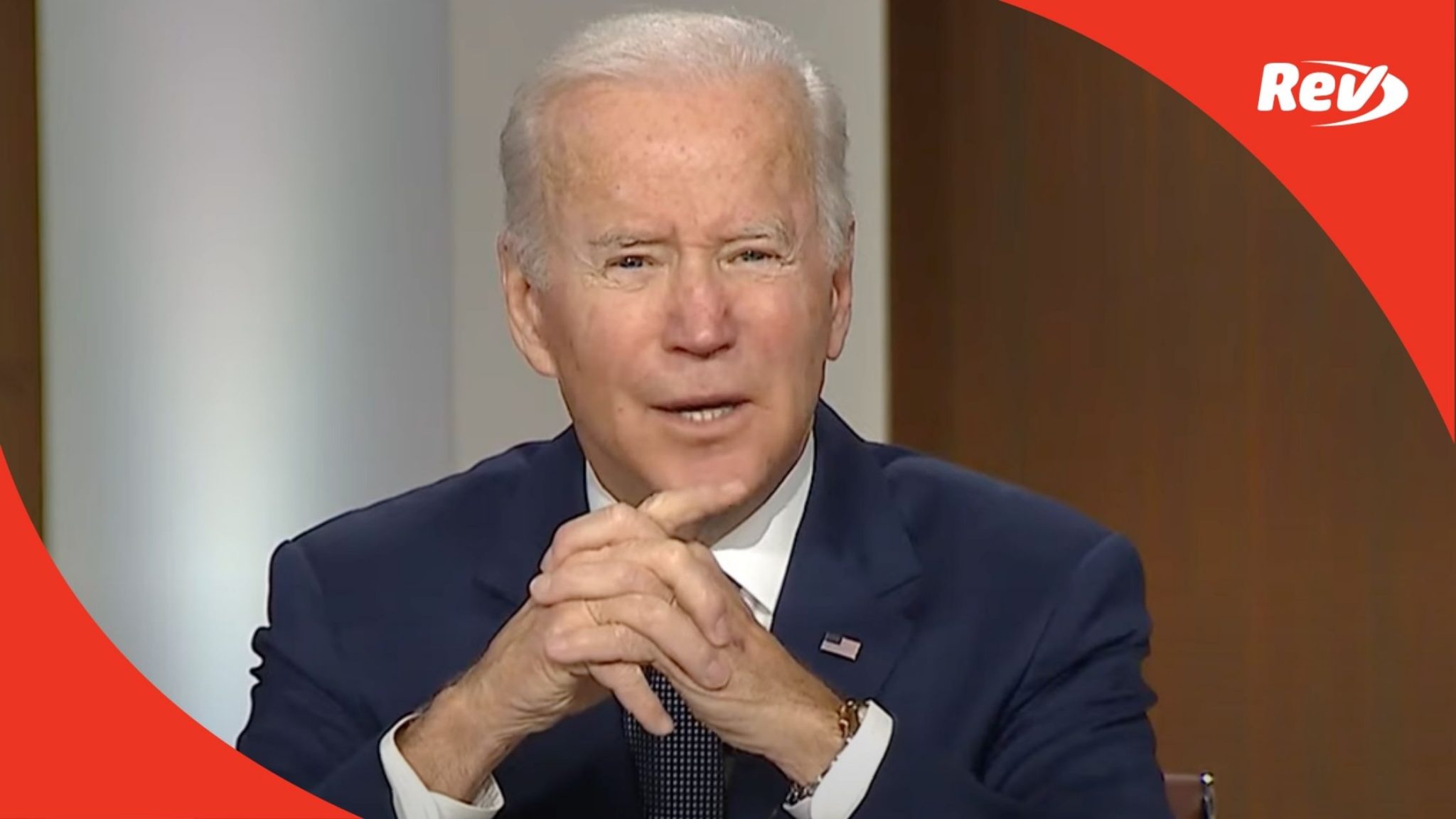 President Joe Biden spoke at the first ‘Summit for Democracy’ from the White House at December 9, 2021. Read the transcript of his speech here.

President Biden: (00:01)
Well, hello everyone. And welcome to the first Summit for Democracy. This gathering has been on my mind for a long time for a simple reason. In the face of sustained and alarming challenges to democracy, universal human rights and all around the world, democracy needs champions. And I wanted to host this summit because here in the United States, we know as well as anyone that renewing our democracy and strengthening our democratic institution requires constant effort. American democracy is an ongoing struggle to live up to our highest ideals and to heal our division and recommit ourselves to the founding idea of our nation captured in our Declaration of Independence, not unlike many of your documents. We say, “We hold these truths to be self-evident that all women and men are created equal, endowed by their creator with certain inalienable rights, among them life, liberty, and the pursuit of happiness.”

President Biden: (01:02)
Democracy doesn’t happen by accident. We have to renew it with each generation, and this is an urgent matter on all our parts in my view. Because the data we’re seeing is largely pointing in the wrong direction. Freedom House reports in 2020, that marked the 15th consecutive year of global freedom in retreat. Another recent report from the International Institute of Democracy and Electoral Assistance noted more than half of all democracies have experienced a decline in at least one aspect of their democracy over the last 10 years, including the United States. And these trends are being exacerbated by global challenges that are more complex than ever, and which requires shared efforts to address these concerns.

President Biden: (01:54)
By outside pressure autocrats, they seek to advance their own power, export and expand their influence around the world, and justify the repressive policies and practices as a more efficient way to address today’s challenges. That’s how it’s sold by voices that seek to fan the flames of social division and political polarization, and perhaps most importantly and most worrying of all, by increasing the dissatisfaction of people all around the world with democratic governments that they feel are failing to deliver for their needs.

President Biden: (02:31)
In my view, this is the defining challenge of our time. Democracy, government of the people, by the people, for the people, can at times be fragile, but it also is inherently resilient, and it’s capable of self-correction, and it’s capable of self-improvement. And yes, democracy’s hard. We all know that. It works best with consensus and cooperation. When people and parties that might have opposing views sit down and find ways to work together, things begin to work. But it’s the best way to unleash human potential and defend human dignity and solve big problems. And it’s up to us to prove that. Democracies are not all the same. We don’t agree on everything, all of us in this meeting today, but the choices we make together are going to define, in my view, the course of our shared future for generations to come. And as a global community for democracy, we have to stand up for the values that unite us. We have to stand for justice and the rule of law, for free speech, free assembly, a free press, freedom of religion, and for all the inherent human rights of every individual.

President Biden: (03:43)
My late friend, Congressman John Lewis, was a great champion of American democracy and for civil rights around the world, learning from and gaining inspiration from other great leaders like Gandhi and Mandela. With this final words as he was dying, to our nation last year, he reminded our country, “Democracy is not a state. It’s an act.” Democracy is not a state. It is an act. So over the next two days, we’re bringing together leaders from more than 100 governments, alongside activists, trade unionists, and other members of civil society, leading experts and researchers and representatives from the business community, not to assert that any one of our democracies is perfect or has all the answers, but to lock arms and reaffirm our shared commitment to make our democracies better, to share ideas and learn from each other, and to make concrete commitments of how to strengthen our own democracies and push back on authoritarianism, fight corruption, promote and protect human rights of people everywhere. To act. To act.

President Biden: (04:54)
This summit is a kickoff of a year in action for all of our countries to follow through on our commitments and report back next year on the progress we’ve made. And as we do this, the United States is going to lead by example, investing in our own democracy, supporting our partners around the world at the same time. From the earliest days of my administration, we pursued a broad-based agenda to prove that American democracy can still do big things and take on challenges that matter most. That’s why we immediately passed what we call the American Rescue Plan to get shots in people’s arms as fast as possible at home and around the world to help get this pandemic under control and to stimulate inclusive and lasting economic recovery. That’s also helping to drive global growth.

President Biden: (05:45)
Last month, I was proud to sign a bipartisan piece of legislation, a true act of consensus between Democrats and Republicans in our country, the Infrastructure Investment and Jobs act. This legislation will make a generational investment to deliver what people need most in the 21st century: clean water, safe roads, high-speed broadband internet, and so much more, all of which strengthens our democracy by creating good paying union jobs that will translate to lives of opportunity and dignity for working people with better access to the tools and resources they need to thrive.

President Biden: (06:22)
And soon, I hope to sign into law, a bill we call the Build Back Better Plan, which will be an extraordinary investment in our people and our workers and give American families just a little more breathing room to deal with their problems and their opportunities. Our domestic agenda has been focused on delivering for the needs of the American people, strengthening our democratic institutions at home. My first day in office, I signed an executive order to advance racial justice and equality. And my administration recently released our first national strategy on gender equality and equity. We’re fostering greater worker power because workers organizing union to give them the voice of the workplace in their community and their country isn’t just an act of economic solidarity. It’s democracy in action.

President Biden: (07:15)
We’re making it easy for Americans to register to vote. And we’ve doubled the number of attorneys defending and enforcing voting rights laws through our Department of Justice. And my administration is going to keep fighting to pass two critical pieces of legislation that will shore up the very foundation of American democracy, the sacred right of every person to make their voice heard through free, fair, and secure elections. We need to enact what we call the Freedom to Vote Act and the John Lewis Voting Right Advancement Act to prevent voting discrimination, provide baselines for accessing the ballot box, and ensure the will of the voters is upheld, and so much more. We should be making it easy for people to vote, not harder, and that’s going to remain a priority for my administration until we get it done. Inaction is not an option.

President Biden: (08:08)
And as we continue to work at home to bring the United States closer to what we call a more perfect union, we’re doubling down on our engagement with and support of democracies around the world. Earlier this week, I released the first US Government Strategy on Countering Corruption, which elevates our fight against transnational corruption, a crime that drains public resources and hollows out the ability of governments to deliver for the people and just evaporates confidence that the people much need to have in their government. The strategy includes working with other partners. All of you around the world will improve transparency, hold corrupt actors accountable, reduce their ability to use the United States international financial system to hide assets and to launder money.

President Biden: (08:54)
And today, I’m proud to launch the Presidential Initiative for Democratic Renewal, which will focus efforts across our diplomacy in foreign assistance programs to bolster democratic resilience and human rights globally. Working with our Congress, we’re planning to commit as much as $224 million in the next year to shore up transparent and accountable governance, including supporting media freedom, fighting international corruption, standing with democratic reformers, promoting technology that advances democracy, and defining and defending what a fair election is.

President Biden: (09:33)
Let me give you a few examples of the kind of work this initiative will entail. A free and independent media. It’s the bedrock of democracy. It’s how public stay informed and how governments are held accountable. And around the world, press freedom is under threat. So we’re committing critical seed money to launch a new multilateral effort in our International Fund for Public Interest Media to sustain independent media around the world. And through our USAID, we’re going to be standing up a new Defamation Defense Fund for journalists to help protect investigative journalists against nuisance lawsuits designed to prevent them from doing their vital work around the world.

President Biden: (10:16)
We’re going to launch new programs to help connect anti-corruption activities across civil society, the media, academia, labor, and protect whistle blowers and help partners eliminate money laundering in safe havens. To ensure that our democracies are strengthened by the voice of all citizens, this presidential initiative includes programs to advance women and girls in civic engagement and political leadership, empowering the LGBTQ+ community individuals to participate in democratic institution, promote labor law reform and work organizations. It includes new lines of efforts with our partners to address online harassment and abuse and reduce the potential for countries to abuse new technologies, including surveillance technologies, to suppress the rights of their people to express their views. And we’re going to stand up two rapid response crosscutting initiatives that support the key goals of this summit, the Fund for Democratic Renewal and the Partnership for Democracy Program. It’s going to allow the state department USAID to surge funds to support our partners working on democratic front lines around the world.

President Biden: (11:35)
My fellow leaders, members of civil society, activists, advocates, citizens, we stand at an inflection point in our history in my view. The choices we make in my view in this moment are going to fundamentally determine the direction our world’s going to take in the coming decades. Will we allow the backward slide of race and democracy to continue unchecked? Or will we, together, together, have a vision and the vision, not just a vision, the vision and courage to once more lead the march of human progress and human freedom forward? I believe we can do that and we will if we have faith in ourselves and in our democracies and in each other. That’s what this summit is about. I’m so looking forward to a productive session and discussions that we’ll have over the next two days. I’m looking forward to the connections we’ll build to support our work moving forward. So let’s get to work. Thank you all so very much for your patience.