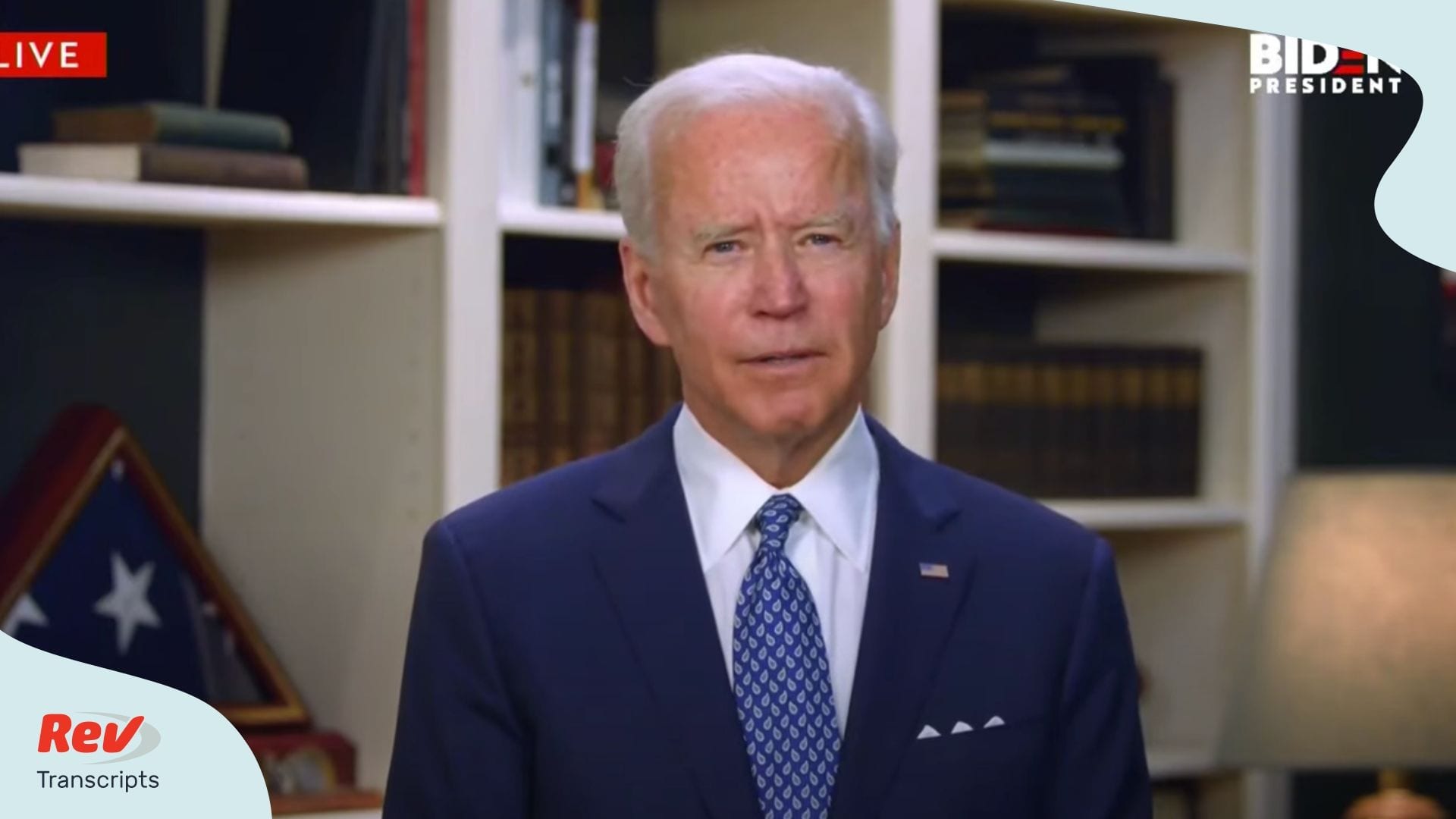 Joe Biden: (00:00)
An act of brutality so elemental, it did more than deny one more black man in America his civil rights and his human rights. It denied him of his very humanity. It denied him of his life. Depriving George Floyd as it deprived Eric Garner, one of the things, every human being must be able to do, breathe, so simple, so basic, so brutal. With the same thing happened with Aubrey. The same thing happened with Brianna Taylor. The same thing with George Floyd. We’ve spoken their names aloud. We’d cried them out in pain and in horror. We chiseled them into a long suffering hearts. They’re the latest additions to the endless list of stolen potential wiped out unnecessarily. It’s a list that dates back more than 400 years; black men, black women, black children, the original sin of this country still stains our nation today.

Joe Biden: (01:00)
And sometimes we manage to overlook it. We just pushed forward with a thousand other tasks in our daily life, but it’s always there. And weeks like this, we see it plainly, that we’re a country with an open wound. None of us can turn away. None of us can be silent. None of us can any longer can we hear the words I can’t breathe and do nothing. We can’t fail victims like what Martin Luther King called “The appalling silence of good people.” Every day African-Americans go about their lives with a constant anxiety and trauma wondering who would be next? Imagine if every time your husband or son, wife or daughter left the house, you feared for their safety from bad actors and bad police. Imagine if you had to have that talk with your child about not asserting your rights, taking the abuse handed out to them just so they could make it home.

Joe Biden: (02:03)
Imagine having police called on you just for sitting in Starbucks or renting an Airbnb or watching birds. This is the norm black people in this country deal with. They don’t have to imagine it. The anger and frustration and the exhaustion, it’s undeniable, but that’s not the promise of America. It’s long past time that we made the promise of this nation real for all people. This is no time for incendiary tweets. It’s no time to encourage violence. This is a national crisis. We need real leadership right now, leadership that will bring everyone to the table so we can take measures to root out systemic racism. It’s time for us to take a hard look at the uncomfortable truths. It’s time for us to face that deep open wound we have in this nation.

Joe Biden: (03:00)
We need justice for George Floyd. We need real police reform that hold cops to a higher standard that so many of them actually meet. That holds bad cops accountable then repairs relationship between law enforcement and the community they’re sworn to protect. We need to stand up as a nation with the black community, with all minority communities, and come together as one America. That’s the challenge we face. It’s going to require those of us who sit in some position of influence to finally deal with the abuse of power. The pain is too immense for one community to bear alone. I believe it’s the duty of every American to grapple with it and to grapple with it now. With our complacency and our silence, we are complicit in perpetuating these cycles of violence. Nothing about this will be easy or comfortable, but do we simply allow this wound to scab over once more without treating the underlying injury, we’ll never truly heal.

Joe Biden: (04:05)
The very soul of America is at stake. We must commit as a nation to pursue justice with every ounce of our being. We have to pursue it with real urgency. We’ve got to make real, the promise of America, which we’ve never fully grasped. That all men and women are equal. Not only in creation, but throughout their lives. Again, to George’s family, thanks for taking the time to talk to me. I promise you, I promise you, we’ll do everything in our power to see to it that justice is had for your brother, your cousin’s case. God love y’all. Folks, we got to stand up. We got to move. We got to change.