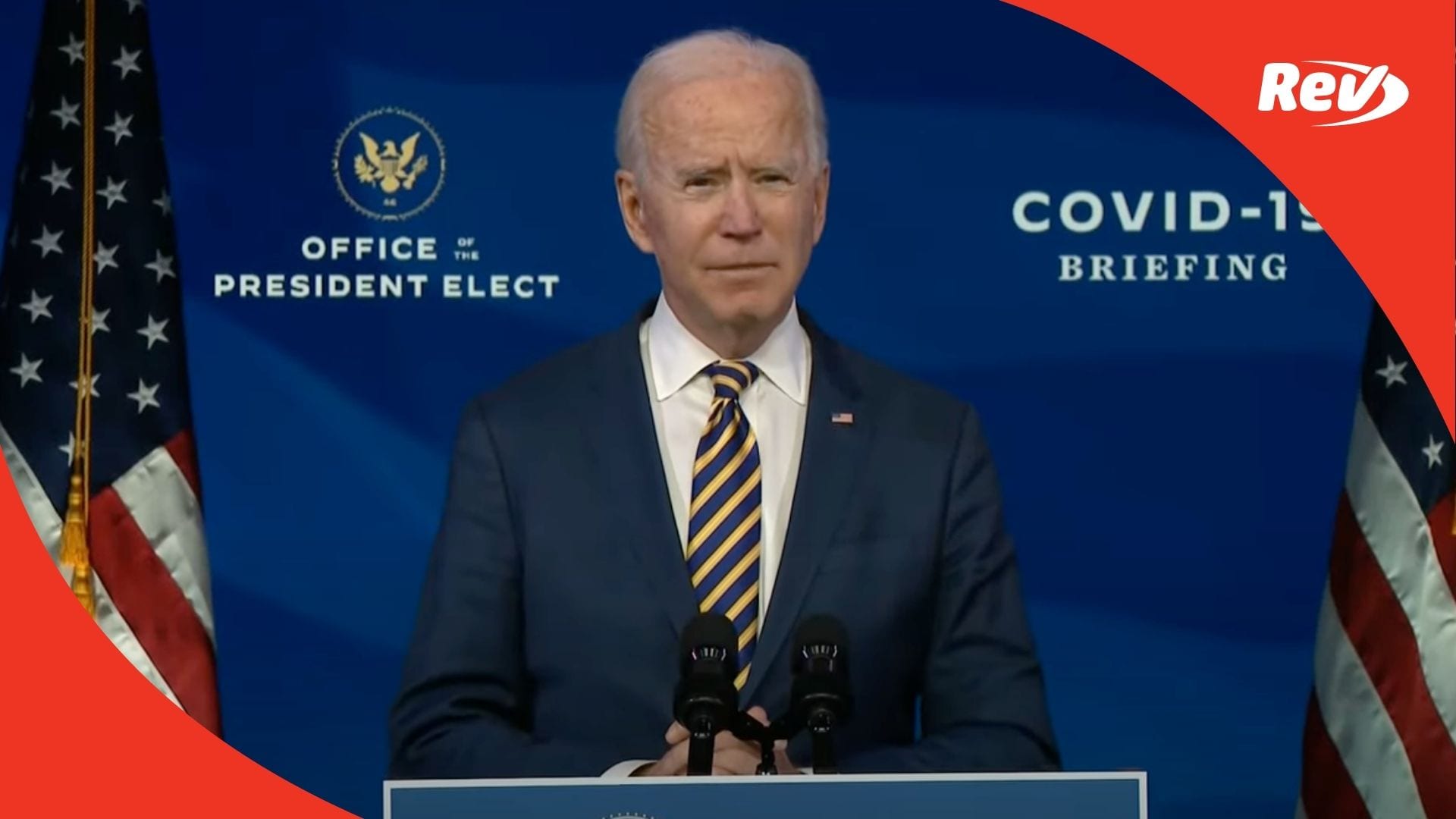 Joe Biden gave a December 29 speech on the coronavirus vaccine distribution in the U.S. He criticized the vaccine distribution plans, saying the Trump administration is “falling far behind” and reiterated his plan to have 100 million people vaccinated in 100 days. Read the full transcript here.

Joe Biden: (00:00)
Our economy is poised to come back and come alive and I can see a return to normalcy in the next year. I also see incredible opportunities for our nation in the years ahead in job creation, clean energy, racial equality, and much more. But we need to be honest. The next few weeks and months are going to be very tough, a very tough period for our nation, maybe the toughest during this entire pandemic. I know it’s hard to hear but it’s the truth. As Roosevelt said, “I think the American people can take whatever we tell them if we tell them straight from the shoulder.” We need to steel our spines for what’s ahead. We need to follow even more closely the recommendations to slow the spread of the virus. And each of us needs to do what we can to protect ourselves, our families and our fellow Americans. We’re going to get through this. Brighter days are coming but it’s going to take all the grit and determination we have as Americans to get it done.

Joe Biden: (01:08)
So today I want to be clear about five things every American should know about our efforts to contain COVID-19 and where the vaccine stands today. First, things are going to get worse before they get better. In September, we passed a grim milestone, 200,000 deaths. At that time, in this very room many of you remember I warned that we hit 400,000 deaths before the end of the Trump administration in January. Critics said I was being too alarmist and negative but as I’ve said all along I will tell you like it is when it comes to COVID and the reality is it looks like that we’re going to hit that grim milestone. We’ve just crossed 330,000 deaths in America. We’re averaging daily death rates of nearly 2,200 people which means we’ll lose tens of thousands of more lives in the months to come.

Joe Biden: (02:08)
Hospitals are being stretched beyond capacity and that’s data before we see the impact of the cases coming from the recent holidays and this upcoming holiday of New Year’s Eve. People getting infected today don’t show up in cases for weeks and those who perish with the disease die weeks after initial exposure. So we have to anticipate that the infections over the holidays will produce soaring cases counts in January and soaring death tolls into February. Turning this around is going to take time. We might not see improvement until we’re well into March as we’ll take time for our COVID response plan to begin to produce visible progress.

Joe Biden: (02:58)
The second thing to know is the Trump administration’s plan to distribute vaccines is falling behind, far behind. Were grateful to the companies, the doctors, the scientists, the researchers, the clinical trial participants and Operation Warp Speed for developing the vaccines quickly. But as I long feared and warned the effort to distribute and administer the vaccine is not progressing as it should. A few weeks ago, the Trump administration suggested the 20 million Americans could be vaccinated by the end of December. With only a few days left in December we’ve only vaccinated a few million so far. And the pace of the vaccination program as moving now, if it continues to move as it is now, it’s going to take years, not months to vaccinate the American people.

Joe Biden: (03:51)
Which brings me to the third thing every American should know, the Biden Harris administration will spare no effort to make sure people get vaccinated. I’ve laid out three challenges in our first 100 days. One of them is ensuring that 100 million shots have been administered by the end of the first 100 days. If Congress provides the funding we’d be able to meet this incredible goal. It would take ramping up five to six times the current pace to one million shots a day. But even with that improvement, even if we boost the speed of vaccinations to one million shots a day, it will still take months to have the majority of the United States population vaccinated.

Joe Biden: (04:39)
I’ve directed my team to prepare a much more aggressive effort with more federal involvement and leadership to get things back on track. We’ll find ways to boost the pace of the vaccinations but as Dr. Fauci and others have stated these past few days this will take more time than anyone would like and more time than the promises from the Trump administration have suggested. This is going to be the greatest operational challenge we’ve ever faced as a nation but we’re going to get it done but it’s going to take a vast new effort that’s not yet underway.

Joe Biden: (05:18)
And that gets me to the fourth thing that we should know, I’m going to move heaven and earth to get us going in the right direction. I’m going to use my power under the Defense Production Act when I’m sworn in and order private industry to accelerate the making of the materials needed for the vaccines as well as protective gear. Vice-president Harris and I had been speaking with county officials, mayors, governors of both parties to speed up the distribution of the vaccines across the nation. We’re planning a whole government effort and we’re going to work to set up vaccination sites and send mobile units to hard to reach communities.

Joe Biden: (06:06)
And we also know there’s a vaccination hesitancy in many communities, especially black, Latino, Native American communities, who have not always been treated with the dignity and honesty they deserve by the federal government and the scientific community throughout our history. That’s why we will launch a massive public education campaign to increase vaccine acceptance. We’ll do everything we can to show the vaccines are safe and critically important for one’s own health and that of their families and the communities. That means we’re also going to make sure vaccines are distributed equitably so every person who wants a vaccine can get it no matter the color of their skin or where they live. And we’re going to ensure vaccinations are free of charge.

Joe Biden: (06:54)
Fifth, while the pandemic rages on and as we increase the supply, distribution and administration of the vaccine we have to remain vigilant. As part of the 100 day challenge I’m going to be asking the American people to wear a mask for the first 100 days of my administration. It’s not a political statement, it’s a patriotic duty. Our administration are going to require a mask wearing where I have the power to do so for federal workers, in federal facilities and interstate travel like planes and trains. And we’ve been working directly with county officials, mayors, governors, to implement mask mandates in their cities and their towns and their states. Masking has been a divisive issue in this country but COVID is a killer in red states and blue states alike. So I encourage you all to wear a mask, encourage your family and friends to do the same. It’s one of the easiest things we can do that will make a huge difference to save lives.

Joe Biden: (07:59)
Another 100 day challenge is opening most of our K through eight schools by the end of the first 100 days in the spring. Look, we can only do that if Congress provides the necessary funding so we get schools, districts, communities, and states the resources they need for those so many things that aren’t there already in a tight budget. They need funding for testing to help reopen schools, more funding for transportation so students can maintain social distances on buses. They need it for school buildings, for additional cleaning service, protective equipment, ventilation systems. This is going to require an additional tens of billions of dollars to get this done.

Joe Biden: (08:43)
And Congress also needs to fund and provide more protective equipment for frontline health workers who are still reusing masks and gowns. We need to scale up testing so anyone who needs one can get a test. After 10 months of the pandemic we still don’t have enough testing, it’s a travesty. All this vaccination, testing, protective gear is going to require more funding from Congress, more than was just approved. That’s why I’ll propose a COVID action package early next year and challenge Congress to act on it quickly.

Joe Biden: (09:21)
Look, my ability to change the direction of this pandemic starts in three weeks. With thousands dying every day between now and then let me conclude by discussing what needs to happen now. I congratulate the bipartisan majority on passing and the president on signing the COVID relief bill. It’s still, even though it’s a step, an important step, still a move in the right direction and it will help people in need. And it’ll pay for some but not all of what we need to fix the COVID response. It’s a down payment but now with that done I hope the president will also clearly unambiguously promote masks wearing. I give former governor Chris Christie credit. He and I have disagreed in a number of things but I’m thankful he’s now encouraging people to do the right thing and wear a mask for themselves, their loved ones and their country. I hope that President Trump will listen to him. He can do it too. It would make a huge difference for President Trump to say wear masks.

Joe Biden: (10:36)
I hope the president will clearly and unambiguously urge all Americans to take the vaccine once it’s available. I took it to instill public confidence in the vaccine. President elect Harris took hers today for the same reason. And when the president’s doctor’s recommend it President Trump should take it and it’s still the same degree of confidence.

Joe Biden: (10:59)
Let me also say this to the American people, we can save all the experts tell us between 60 and 100,000 lives in the weeks and months ahead if we just step up together, wear a mask, socially distance, wash our hands, avoid large indoor gatherings. I know all of these are not easy to ask but I’m asking you to make a sacrifice. You’re already making tremendous sacrifices every single day. It’s hard on your lives, on your livelihoods, on your kids, on your families. It’s not small what we’re asking of you but we’re in this together and the actions we take now are going to help us contain the pandemic and get us back to our lives and to our loved ones.

Joe Biden: (11:48)
So the American people to all of you I know there’s a lot we have to do but I want you to know there’s also much we can do. We’re the United States of America. We’ve been through hard times before as a nation and we’ll come through this as well. I promise you we will. So please, I wish you a happy new year. May God bless you and may God protect our troops. Wear a mask.