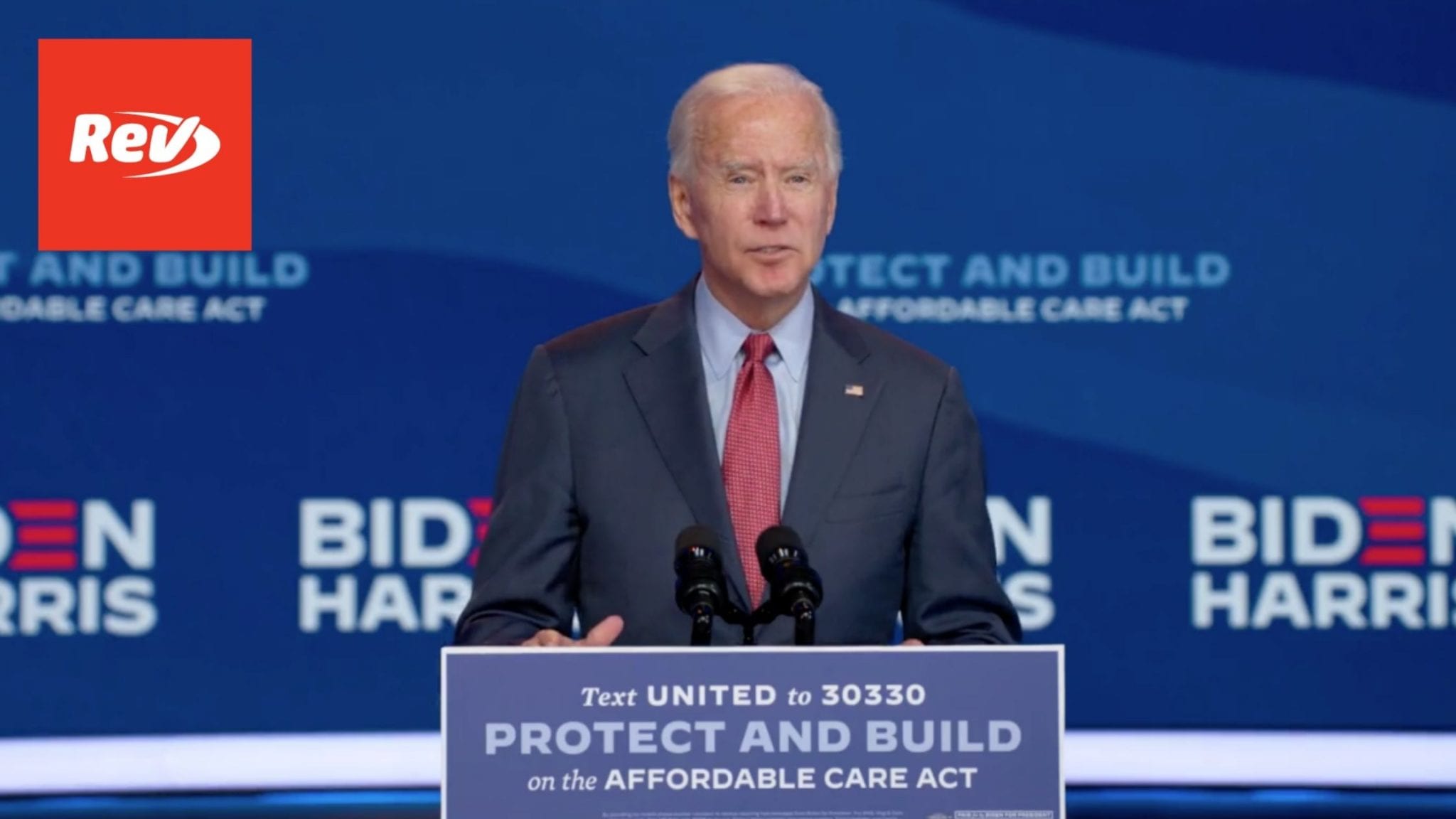 Joe Biden gave a campaign speech about the Affordable Care Act from Wilmington, Delaware on October 28. Read the transcript of his remarks here.

Joe Biden: (02:39)
Good afternoon, everyone. Let me say to the press assembled, I’m going to make a short statement here, and then I’m going over to vote with my wife and then I’ll be happy to take your questions after I vote. Okay?

Joe Biden: (02:57)
I just completed in here another public health briefing with my team of public health experts. We looked at the latest reported data on how it indicates that we’re on an upward slope of a bigger wave of confirmed infections than anything we experienced to date. We talked about what actions would be needed to turn this around and how it will be made worse by this administration’s declaration of surrender to the virus. And we discussed again, the vital importance of wearing masks, of protecting yourself, protecting your neighbor, and to save around a 100,000 lives in the months ahead between now and just after the first of the year. This is not political, it’s patriotic. Wearing a mask, wear one, period.

Joe Biden: (03:49)
We focused on the way this virus is hitting communities of color much harder, particularly black, Latino and Native American communities. We’re seeing race-based disparities across the aspects of this virus, higher infection rates, but lower access to testing and harder time quarantining safely because of their financial circumstances. Lower access to quality treatment, when they are infected and tragically higher mortality rates. One in 1,000 black Americans have died from this virus. This is a staggering statistic and 57% of black adults, 46% of Latino adults know someone who has died or been hospitalized from disease.

Joe Biden: (04:35)
Folks, we’ve lost more than 220,000 lives to this virus already. But this administration has just given up. Over the weekend, the White House, chief of staff Mark Meadows, went on television and admitted that they’ve waived the white flag and declared surrender. He said quote, “We’re not going to control the pandemic.” End of quote. The American people deserve so much better than this. Just look at what happened last night in Omaha, after the Trump rally ended. Hundreds of people, including older Americans and children were stranded in sub-zero freezing temperatures for hours. Several folks ended up in the hospital. It’s an image that captures President Trump’s whole approach to this crisis. He takes a lot of big pronouncements and he makes a lot of big pronouncements, but they don’t hold up.

Joe Biden: (05:25)
He gets his photo op and then he gets out. He leaves everyone else to suffer the consequences of his failure to make a responsible plan. It seems like he just doesn’t care much about it. And the longer he’s in charge, the more reckless he gets, it’s enough. It’s time to change. Meanwhile, yesterday, the White House science office and this stunned me, put out a statement listing ending the COVID-19 pandemic as a top accomplishment of President Trump’s first term. Top accomplishment of Trump’s first term. At the very moment when infection rates are going up in almost every state in our union, the refusal of the Trump administration to recognize the reality we’re living through at a time when almost a 1,000 Americans a day are dying. Every single day is an insult to every single person suffering from COVID-19 and every family who’s lost a loved one. There’s nothing more personal. There’s nothing more personal to an American family than their health care and the health care of their loved ones.

Joe Biden: (06:36)
I know all too well what it feels like to have your heart ripped out, losing a loved one too soon. To sit in the hospital bedside and feel like there’s a black hole in the middle of your chest, knowing there’s not much you can do. I and many of you know what it feels like to watch a beloved person die, why they’re dying of cancer or some other disease without having to wonder about whether you’re can pay for the medical bills or what would happen if God forbid the insurance companies were able to come in and say, ” We’re not going to cover the treatment.” And yet today, President Trump is on a single-minded crusade to strip Americans of their health care. That would only create another enormous crisis in the public health system.

Joe Biden: (07:20)
In two short weeks, exactly one week after the election, the Trump administration will make its case, asking the Supreme Court to strike down the Affordable Care Act quote, “In its entirety.” In its entirety. Let me say that again. They’re arguing that the entire law must fall, which would strip 20 million Americans have their health insurance overnight, rip away protections for pre-existing conditions for more than 100 million people in the middle of an upswing of a pandemic, the upswing.

Joe Biden: (07:57)
Look, just this week on 60 Minutes, we heard what Trump told Lesley Stahl about the upcoming Supreme Court case on the Affordable Care Act. And I quote, “I hope that they end it’ll be so good if they end it.” End of quote. There is no question. There’s no question. That’s why President Trump nominated Justice Barrett to the court. And that’s why the Republicans jammed her through confirmation in the middle of the election. Republicans have tried and tried and tried since the Affordable Care Act was passed to overturn it. And every single time they failed.

Joe Biden: (08:39)
President Trump has tried everything he can on his own to sabotage the law. So now through what I’d characterize as a craving abusive of political power. They’ve added to the Court of Justice who criticized Chief Justice, Roberts’ previous decision to uphold the Affordable Care Act in hopes that they can destroy the Affordable Care Act once and for all through the courts. No matter how many Americans they hurt in the process. So let’s remember exactly what’s at stake in this election. If you have diabetes, asthma, cancer, or even complications from COVID-19, you’re going to lose the protection this law provides. Insurers will once more be able to jack-up your premiums or deny your coverage. Women could again be charged more for their health care just because they’re women and children will no longer be able to stay in their parents’ insurance policies until age 26.

Joe Biden: (09:36)
On top of all that, overturning the ACA could mean that people have to pay to get COVID-19 vaccine once it’s available. That’s right. That’s right. The law that says insurers are required to cover vaccines for free is the Affordable Care Act. And he’s striking that down, attempting to. Unlike Donald Trump, I believe health care isn’t a privilege, it’s a right that everyone have access to it? This country can’t afford four more years of a president who thinks he’s only responsible for the wellbeing of the people who voted for him. We can’t afford four more years of a president who instead of fighting the virus, attacks doctors. I can’t get over the guy. He attacked doctors claiming their over-reporting COVID cases because they want to make more money. Doctors are over-reporting cases because they want to make money.

Joe Biden: (10:38)
Our doctors and nurses and our frontline health care workers are putting themselves at enormous risk every day. More than a 1,000 of them have already died in attempt to beat back this pandemic and save lives. They deserve to be treated with respect by their president. We can’t afford four more years of a president who’d rather spend his time desperately trying to strip people of their health care, and even once bothered to put forward a health care plan on his own. We can’t afford four more years of Donald Trump. And the good news is we have a chance to turn this around by voting. We have six more days left in this election and the American people have it in their hands to put this country in a vastly different path.

Joe Biden: (11:26)
This is my commitment to you. I’ll protect and build on the Affordable Care Act, so that you can keep your private insurance or choose a Medicare like option. You can make it stronger. I’m going to make it stronger with your help to lower premiums and deductibles. And out-of-pocket expenses. We’ll bring down drug prices, but almost two thirds by taking steps such as allowing Medicare to negotiate with the pharmaceutical companies who are making billions of dollars, making the price lower. When they negotiate, Medicare says, “We’re only going to pay you X amount for the following medicines.” That will lower prices drastically making it available to everyone.

Joe Biden: (12:12)
We’re going to make sure every American has access to free COVID-19 vaccine. This isn’t beyond our capacity. Now, if we come together, we can stand together. If we stand together as the United States, the United States, Democrats, Republicans and independents. We can transcend all divisions and show what’s possible. There’s nothing beyond our capacity. There’s no limit to America’s future. And if I’m elected president, as I said yesterday in Warm Springs, Georgia. I’ll be a president who is not in it for himself, but for others. A president of doesn’t divide us, but unites us. A president who appeals not to the worst in us, but to the best in us and a president who looks not to settle scores, but to find solutions. A president guided not by wishful thinking, but by science, reason and facts.

Joe Biden: (13:13)
Even if I win, it’s going to take a lot of hard work to end this pandemic. I’m not running on the false promise of being able to end this pandemic by flipping a switch. But what I can promise you is this, we will start on day one doing the right things. We’ll let science drive our decisions. We will deal honestly with the American people and we will never, ever, ever quit. That’s how we’ll shut down this virus. So we can get back to our lives, a lot more quickly than the pace we’re going at now. I’m going to fight to protect your health care, I promise you. Just like I fight for my own family. We can do this. I promise you, and I’m going to go do what I hope all of you do.