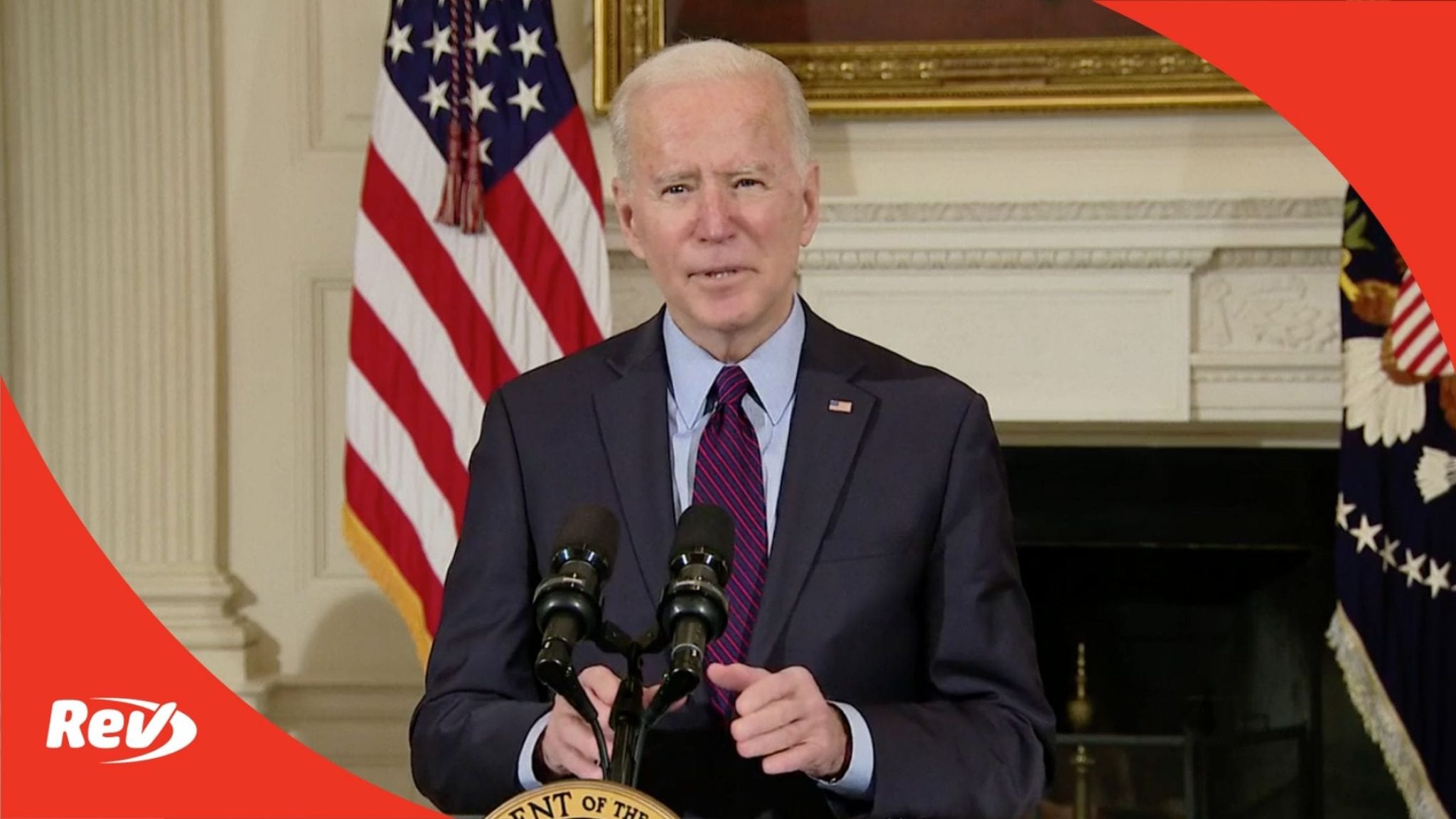 President Joe Biden gave a speech on the state of the economy and the need for COVID-19 relief on February 5, 2021. He discussed the American Rescue Plan. Read the full transcript of his remarks here.

President Joe Biden: (00:00)
Chairpersons of the House of Representatives in the Oval, and it went a little longer, but went very well. Thank you all for being here. I’m accompanied by the vice-president and the secretary of Treasury, Janet Yellen. And I want to talk today about our plan. And the January job numbers came out today. And while we’re grateful for everyone who found work and is earning a paycheck, it’s very clear our economy is still in trouble. We added just 6,000 private sector jobs in the country last month. Overall, we added 49,000 jobs. And this at a time when we have more than 10 million people out of work, 4 million people have been out of work for six months or longer and 2.5 million women have been driven from the workforce. 15 million Americans are behind in their rental payments, 24 million adults and 12 million children literally don’t have enough food to eat. These aren’t Democrats or Republicans, they’re Americans and they’re suffering.

President Joe Biden: (01:12)
They’re suffering not because of anything they did through no fault of their own, they’re suffering. Once in a century virus has decimated our economy and it’s still wrecking havoc on our economy today. And so much of it is still about the virus. We’re still in the teeth of this pandemic. In fact, January was the single deadliest month of the whole pandemic. We lost nearly 100,000 lives. I know some in Congress think we’ve already done enough to deal with the crisis in the country. Others think that things are getting better and we can afford to sit back and either do a little or do nothing at all. That’s not what I see. I see enormous pain in this country. A lot of folks out of work, a lot of folks going hungry, staring at the ceiling tonight wondering what am I going to do tomorrow. A lot of folks trying to figure out how to keep their jobs and take care of their children.

President Joe Biden: (02:14)
A lot of folks reaching the breaking point. Suicides are up, mental health needs are increasing, violence against women and children is increasing. A lot of folks are losing hope. And I believe the American people are looking right now to their government for help to do our job, to not let them down. So I’m going to act and I’m going to act fast. I’d like to be doing it with the support of Republicans. I’ve met with Republicans. There’s some really fine people want to get something done, but they’re just not willing to go as far as I think we have to go. I’ve told both Republicans and Democrats that’s my preference to work together. But if I have to choose between getting help right now to Americans who are hurting so badly and getting bogged down in a lengthy negotiation or compromising on a bill that’s up to the crisis, that’s an easy choice.

President Joe Biden: (03:11)
I’m going to help the American people who are hurting now. That’s why I’m so grateful to the House and the Senate for moving so fast on the American Rescue Plan. Here’s what’s in that plan. First, it puts $160 billion into our national COVID-19 strategy, which includes more money for manufacturing, distribution, and setting up of vaccine sites. Everything that’s needed to get the vaccines into people’s arms. There’s simply nothing more important than us getting the resources that we need to vaccinate the people in this country as soon as quickly as possible. So job number one of the American Rescue Plan is vaccines, vaccines. The second, the American Rescue Plan is going to keep the commitment of $2,000. 600 has already gone out, $1,400 checks to people who need it. This is money directly in people’s pockets. They need it, we need to target that money so folks making $300,000 don’t get any windfall.

President Joe Biden: (04:24)
But if you’re a family that’s a two or a wage earner, each of the parents, one making 30 grand, one making 40 or 50, maybe that’s a little more than, well, they need the money and they’re going to get it. And here’s what I won’t do. I’m not cutting the size of the checks. They’re going to be $1,400, period. That’s what the American people were promised. Very quickly, here’s the rest of my plan. It has money for food and nutrition so that folks don’t go hungry. I think our Republican friends are going to support that. It extends unemployment insurance, which is going to run out on March 13th of this year to the end of September of this year, because we’re still going to have high unemployment. It helps small businesses thousands of whom have had to go out of business.

President Joe Biden: (05:20)
It has money to help folks pay their health insurance. It has rental assistance to keep people in their homes rather than being thrown out in the street. It’s got money to help us open our schools safely. And there’s money for childcare, for paid leave. It gets needed resources to state and local governments to prevent layoffs of essential personnel, firefighters, nurses, folks who are school teachers, sanitation workers. It raises minimum wage. It’s big and it’s bold and it’s a real answer to the crisis we’re in. That’s one more thing. And I want to say it very clearly on this, just be very clear in this point, it’s better economics. It not only addresses the immediate crisis we’re in, it’s better for the long-term economic health of our nation and our competitiveness. My plan creates more jobs, creates more economic growth and does more to make us competitive with the rest of the world than any other plan.

President Joe Biden: (06:23)
Don’t take my word for it. Just look at what leading economists across the nation have said and across the ocean have said. Wall Street investment firm and Moody’s says, if we pass the American Rescue Plan it will lead to 4 million more jobs than otherwise would be created. The nonpartisan Brookings Institution has looked at the American Rescue Plan and said the GDP will reach pre pandemic projections by 2021. Meaning we’ll have recovered by end of 2021. Much sooner, by the way, then if we do nothing. Look, just this week, the Congressional Budget Office projected that if we don’t take action, it would take them to the year 2025 to return to full employment. There’s also a growing chorus of top economists right, center and left that say we should be less focused on the deficit and more focused on the investments we make and can make now in jobs, keeping families out of poverty and preventing longterm economic damage to our nation.

President Joe Biden: (07:33)
The simple truth is if we make these investments now with interest rates at historic lows, we’ll generate more growth, higher incomes, a stronger economy and our nation’s finances will be in a stronger position as well. And the pay off won’t just be in jobs, but in our global competitiveness as well, because we’ll be regaining our economic strength faster. So the way I see it, the biggest risks is not going too big, it’s if we go too small. We’ve been here before. When this nation hit the Great Recession that Barack and I inherited in 2009, I was asked to lead the effort on the Economic Recovery Act to get it passed. There was a big recovery package, roughly $800 billion. I did everything I could to get it passed, including getting three Republicans to change their votes and vote for it. But it wasn’t enough. It wasn’t quite big enough. It stemmed the crisis, but the recovery could have been faster and even bigger.

President Joe Biden: (08:41)
Today, we need an answer that the meets the challenge of this crisis, not one that falls short and that’s the issue facing the country right now. What Republicans have proposed is either to do nothing or not enough. All of a sudden, many of them have discovered fiscal restraint and the concern for the deficits. But don’t kid yourself, this is a approach that will come with a cost, more pain for more people for longer than it has to be. Secretary Yellen talks about the scarring effect that comes with prolonged economic pain. We see that scarring effect in economic data, but more important we can see it in the lives of people living with long-term unemployment, living in hunger, at wit’s end over how to keep their jobs and take care of their kids. And then she talks about the need to alleviate long-term suffering in the economy. We can do that.

President Joe Biden: (09:42)
We don’t have to wait until 2025 to get back to full employment, which will be the case if we don’t do this. Again, independent analysis from places like Moody’s on Wall Street, Brookings Institution, the American Rescue Plan could achieve that by the beginning, full employment, by the beginning of next year. So to me, this is what this moment comes down to. Are we going to pass a big enough package to vaccinate people, to get people back to work, to alleviate the suffering in this country this year? That’s what I want to do. Or are we going to say to millions of Americans who are out of work, many of whom have been out of work for six months or longer who have been scarred by this economic and public health crisis, don’t worry. Hang on. Things are going to get better. We’re going to go smaller. So it’s just going to take us a lot longer, like until 2025.

President Joe Biden: (10:45)
That’s the Republican answer right now. I can’t, in good conscience, do that. Too many people in the nation have already suffered for too long through this pandemic and economic crisis and telling them we don’t have the money to alleviate their suffering, to get to full employment sooner, to vaccinate America after $8 trillion in deficit spending over the past four years, much of it having gone to the wealthiest people in the country is neither true, nor necessary. We do have the resources to get to full employment sooner. We do have the tools to reduce a lot of suffering in this country. We just have to choose to use them. So it’s time to act. We can reduce suffering in this country. We can put people back to work. We can gain control of this virus. That’s what the American rescue plan does. And that’s what I’m determined to do. And that’s what I hope we’re going to be able to do in the near term. So may God bless you all, may God protects our troops and I truly believe real help is on the way. Thank you all so very much. Thank you.