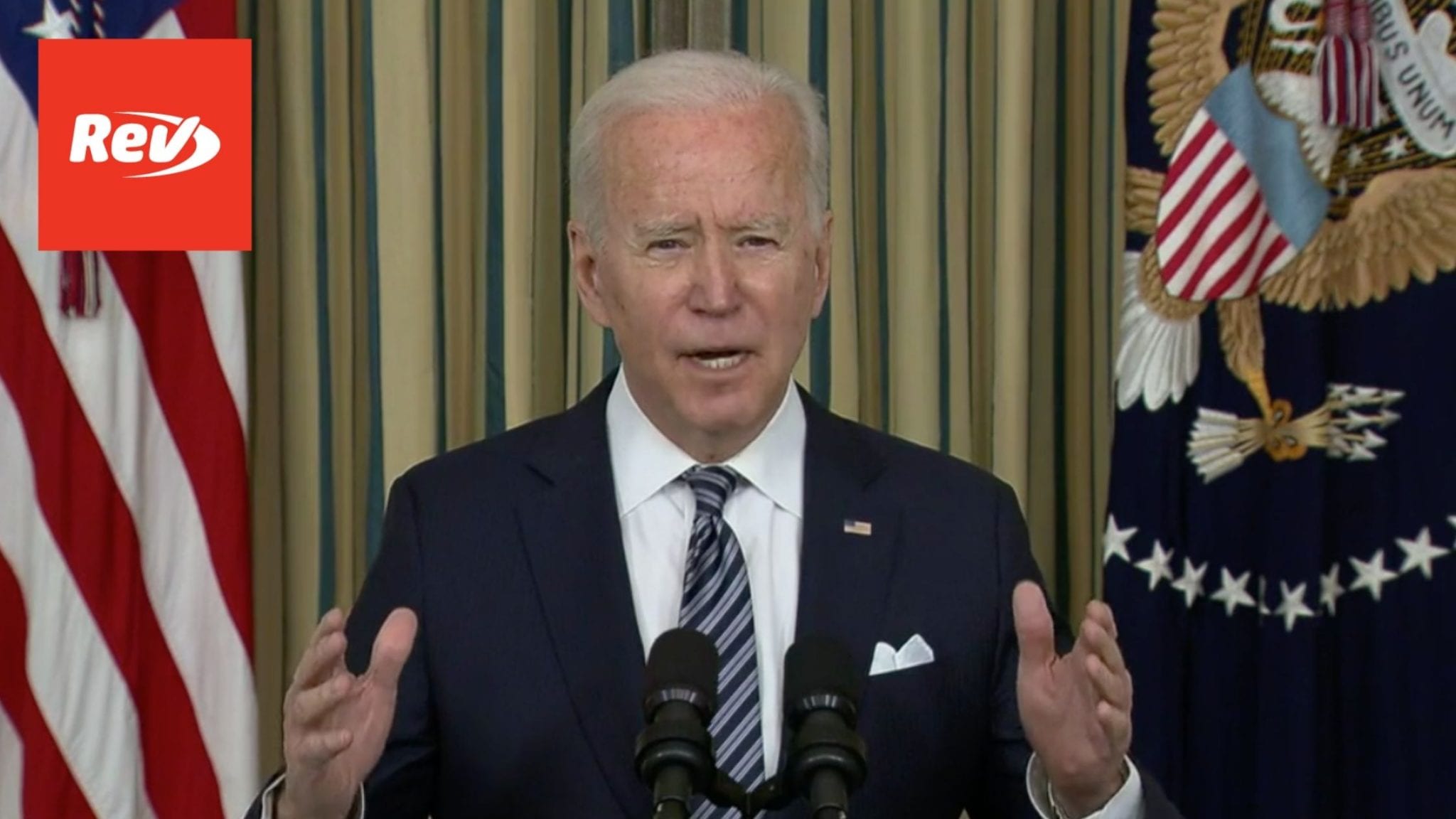 President Joe Biden gave a speech on the American Rescue Plan and the COVID-19 relief stimulus checks on March 15, 2021. Read the transcript of his briefing speech here.

President Joe Biden: (00:00)
Over the next 10 days, we’ll reach two goals, two giant goals. The first is 100 million shots in people’s arms will have been completed within the next 10 days and 100 million checks in people’s pockets in the next hundred days. Shots in arms and money in pockets. That’s important. The American Rescue Plan is already doing what it was designed to do: make a difference in people’s everyday lives. We’re just getting started. By the time all the money is distributed, 85% of American households will have gotten their $1,400 rescue checks.

President Joe Biden: (00:41)
To give one more example, for the average family of two parents and two children making a combined income of $110,000 a year, that’s going to add $5,600 for them. $5,600 they’ll get. The plan does a lot more. It extends unemployment insurance for the 11 million Americans unemployed and any who will be unemployed in the near term. It’ll help hundreds of thousands of small businesses keep their doors open, which makes a gigantic difference in neighborhoods and communities. If you have a drug store, if you have a beauty shop, a hardware store, it’s the center of small communities. It gets our schools the resources they need to open safely. It provides the biggest investment in childcare since World War II. It provides food and nutrition help for the millions of families, keep them from going hungry, keeping a roof over their heads. It expands healthcare coverage and lowers healthcare costs for so many people. It will cut child poverty in half in this country. That’s the estimate. Child poverty will be cut in half as a consequence of what’s in this Recovery Act.

President Joe Biden: (01:54)
It will generate economic growth for the entire nation. That’s why major economists, left, right, and center, support this plan. Even Wall Street has agreed. According to Moody’s, by the end of this year, this law will spur our economy to create 7 million new jobs, and does one more thing. It focuses on rebuilding the backbone of this country: working families, the middle-class, the people who built this country. But as I said last week, it’s one thing to pass a historic piece of legislation like the American Rescue Plan, and it’s quite another to implement it. The devil is in the details. It requires fastidious oversight to make sure the relief arrives quickly, equitably, and efficiently with no waste or fraud, in your bank account, in your mailbox, to the local business in your community, and to your child’s school.

President Joe Biden: (02:53)
Look, I’ve been here before. When President Obama and I came to office in 2009, he put me in charge of implementing the Recovery Act, which help us recover and rebuild during the Great Recession. I was authorized to put together a team, including accountability board with inspectors general from different agencies that were effected by the act to make sure we got the roughly $800 billion out, out into the countryside, by the book. And quickly over 18 months. I talked to literally almost over 150 mayors, all governors except one, constantly going over the granular detail of the implementation of that legislation. The effort put us on a path from crisis, to recovery, to resurgence.

President Joe Biden: (03:48)
Accordingly, to the oversight board of inspectors general, they said we got it done with less than two-tenths of 1% waste or fraud. That’s not what the previous administration did though. When the Congress I shared passed the CARES Act, the Congress created a committee of inspectors general to make sure every penny of that money was spent as it was directed. But one of the first things the previous administration did was fire the head of the Inspector General’s Committee. When Congress passed what was intended to be small business relief program, it instead became a free for all for well-connected companies. Mainstream businesses from hardware stores to beauty salons that needed the help most were left behind. 400,000 are now gone. We will not let that happen this time.

President Joe Biden: (04:49)
I learned from my experience implementing the Recovery Act just how important it is to have someone who can manage all the moving parts with efficiency, speed, and integrity, and accountability. That’s the sort of management we’ve seen in our fight against the virus with Jeff Zients, our COVID response coordinator. Today, I’m pleased to announce and introduce another gifted manager to coordinate our implementation of the American Rescue Plan, Gene Sperling. Gene will be on the phone with mayors and governors, red states, blue states, the source of constant communication, a source of guidance and support, and, above all, a source of accountability for all of us to get the job done. Gene’s been here before. The only person in history to serve as director of the National Economic Council, twice. He led successful efforts to deliver relief to small businesses and unemployed Americans in the Obama-Biden administration and in the Clinton administration. I spoke with Gene earlier today, alongside my economic team. He’s ready to get to work. In fact, he’s already hit the ground running. Together, we’re going to make sure that the benefits of the American Rescue Plan go out quickly and directly to the American people where they belong.

President Joe Biden: (06:17)
Let me close with this. Help is here, and hope is here, in real and tangible ways. We’re just days away from a hundred million shots in the arms of millions of Americans. That’s the way. That’s the way on the way to get every single American access to the vaccine. 100 million checks and/or direct deposits going into the pockets of Americans on the way to millions of more Americans. That’s real progress.

President Joe Biden: (06:54)
We’ve a lot more to do. We have to prove to the American people that their government can deliver for them and do it without waste or fraud, that we can vaccinate the nation, that we can get our kids safely back in school, that we can get our economy back on track by helping hundreds of thousands of small businesses open and stay open, and that we can give people of this nation a fighting chance again, with relief checks, lower childcare costs, lower healthcare costs, and so much more. That’s our job. That’s our responsibility. In the process, we’ll be growing the economy as well. We’re going to have to stay on top of every dollar spent through the American Rescue Plan. That’s what we’re going to do. We can do this. We will do this. God bless you all. Help is on the way. May God protect our troops. Thank you very, very much.

President Joe Biden: (07:58)
I’m hearing a lot of reports from serious reporters like you saying that. I discussed it with my team and they say the thing that has more impact than anything Trump would say to the MAGA folks is what the local doctor, what the local preachers, what the local people in the community say. I urge, I urge all local docs, and ministers, and priests to talk about why, why it’s important to get that vaccine, and even after that, until everyone is in fact vaccinated, to wear this mask.