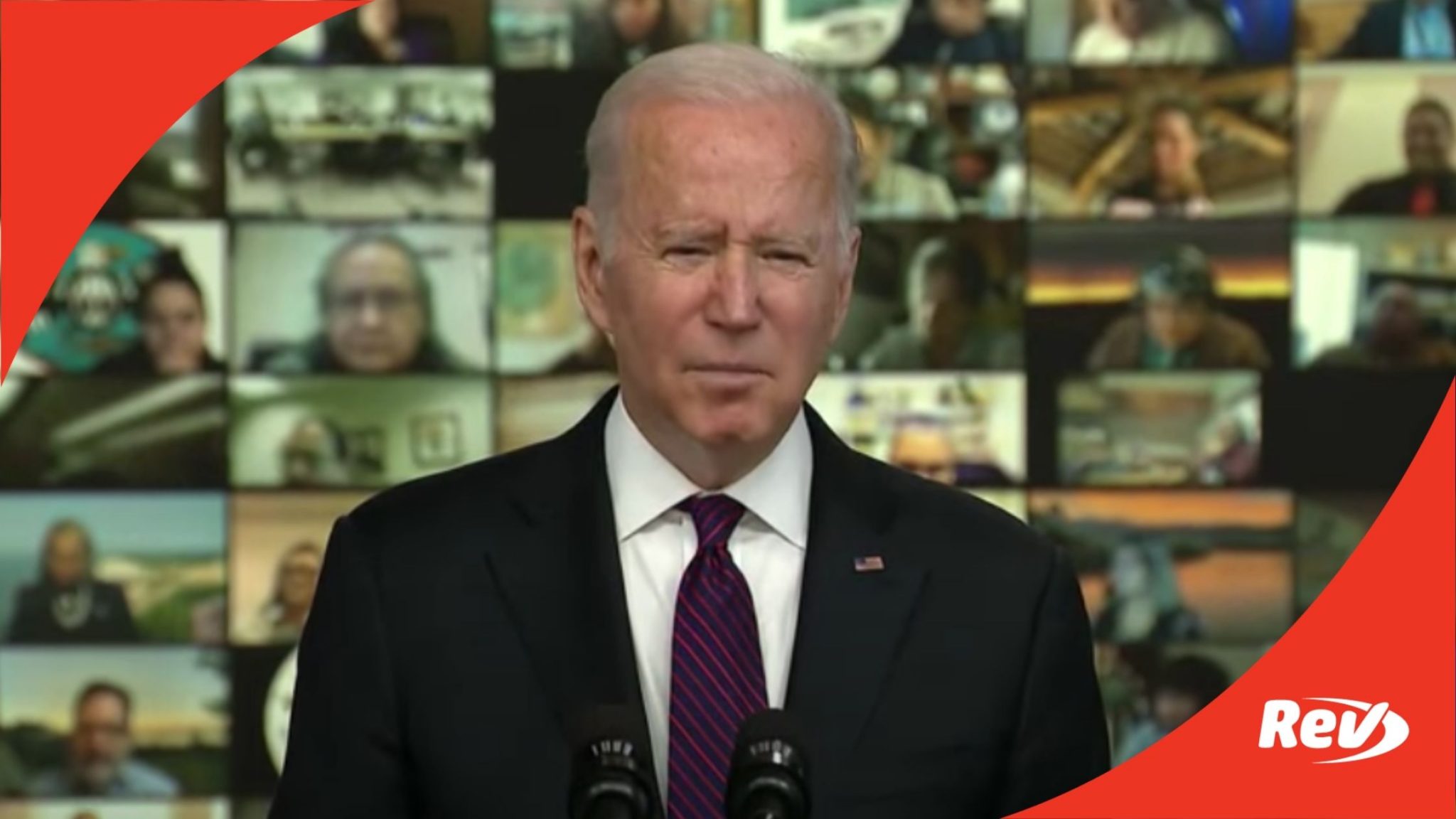 President Joe Biden signed an executive order to address violence against indigenous people on November 15, 2021. Read the transcript of his speech remarks here.

Joe Biden: (00:12)
I say to the press excuse my back. Next time in Washington. I see you all up on the board behind me. I Hope we do this in person. I hope. That’s my hope. Thank you.

Joe Biden: (00:32)
Good morning. I want to thank you for joining us. This is a big day. I think as my mother would say, former Senator Daniel Inouye is looking down going finally. I was raised by Daniel Inouye in the United States Senate. To President Fawn sharp and Chairman Hill of the Oneida Nation and our President Palsy. I thank you all for what you’re doing. I want to recognize you.

Joe Biden: (01:13)
Chairman Hill, I thought being from upstate New York and college where my deceased wife is from, Skaneateles Lake not far from Oneida, New York. I thought that the Oneida Nation was all in central New York but obviously you up in Wisconsin. Come down and see us in Oneida.

Joe Biden: (01:35)
Anyway, I want to thank you Madam Secretary for your remarks but I also want thank you Deb for being willing to join when I asked you to come along and to serve. As I said, I was confident at the time you would be incredibly important.

Joe Biden: (01:59)
When I got to the Senate, Daniel Inouye took me under his way. He helped me understand the simple truth that I had only been vaguely aware of. That is that Tribal Nations do better when they make their own decisions. That’s why some of the votes I took as a young are Senator among my proudest. Supporting the Indian Self-Determination and Education Assistance Act. Indian Child Welfare Act, Native American Graves Protection and Repatriation Act and so much more.

Joe Biden: (02:31)
When I ran for president, it was important for me to continue to make progress. That’s what we’ve done since I took office. When COVID-19 struck, it hit the Indian Country with devastating consequences. Native Americans contracted the virus at over three times the rate of white Americans. Nearly twice the rate of lives lost. Twice as many died as a percentage. But Tribal Nations stepped up.

Joe Biden: (02:59)
Today, the Native Americans have gone from being a population most harmed by COVID to one of the populations most vaccinated against COVID. That success has a lot to do with Tribal Leadership. But it also it has to do with the American Rescue Plan which included over $31 billion for Tribal Nations. The most significant investment in the history of Indian Country. Long overdue.

Joe Biden: (03:26)
Now we’re taking the next step. Today, I’m signing and I’ll certainly sign a bipartisan infrastructure deal. Everyone knows we’re long overdue to make major investments in infrastructure. But nobody knows that better than the Indian Country. Tribal lands have been chronically underfunded for generations.

Joe Biden: (03:46)
I’m very proud to say that when I sign the bill outside in the South Lawn shortly, the single largest investment in tribal infrastructure ever is going to occur. More than $13 billion in direct investments to Indian Country and tens of billions more in grants and future funding opportunities. Funding for clean drinking water, high speed internet, roads and bridges, environmental cleanups and so much more. But we can’t stop there. We need Congress to pass my bill Build Back Better Plan as well.

Joe Biden: (04:19)
Today, one in 10 native American parents have reported having to quit or change their jobs or turn down an opportunity due to a childcare challenge. This bill would save most families thousands of dollars per year in childcare. Helping moms and dads rejoin the workforce. Also, this bill when it passes, it will allow every three and four year old in the nation to attend high quality preschool, increasing considerably their chances of getting all the way through the first 12 years of primary school and onto college.

Joe Biden: (04:51)
It includes the most significant investment to tackle the climate crisis in history. I might note parenthetically, no group of Americans has created and cared more about preserving what we inherited than the Tribal Nations. This also will expand health coverage, lower costs for millions of Americans.

Joe Biden: (05:12)
We have to continue to stand up for the dignity and sovereignty of Tribal Nations. My dad used the word dignity I think more than any other word. He said, everyone is entitled to be treated with dignity. I was proud to re-establish the White House Council on Native American Affairs and to issue a memorandum in my first week in office instructing my entire administration to engage in regular, meaningful consultation with Tribal Nations.

Joe Biden: (06:05)
We’ve also taken action to protect tribal lands. Revoking the permit for the Keystone XL Pipeline System, preserving and protecting the sacred homeland including Bears Ears and Grand Staircase-Escalante. It’s part of who we are as a nation. I’m grateful to the tribes who led the effort. We also can be proud of that progress but there’s still so much more to do. Today I’m announcing five new initiatives.

Joe Biden: (06:34)
First, a new initiative involving 17 departments and agencies to protect tribal treaty rights and the work of the federal government. Second, a new initiative to increase tribal participation in the management of stewardship of federal lands. Third, my administration will be the first to work with the tribes to comprehensively incorporate tribal ecological knowledge into the federal government scientific approach. Helping us fight climate change.

Joe Biden: (07:05)
Forth, taking action to protect the greater Chaco landscape in Northwestern, New Mexico from future oil and gas drilling and leasing. Fifth, I’m about to sign an executive order in a moment, addressing the crisis of violence against Native Americans.

Joe Biden: (07:24)
Today I’m directing federal officials to work with Tribal Nations on strategies to improve public safety and advance justice. This builds in the work we did together in reauthorizing the Violence Against Women Act in 2013 when we granted authority to tribes to exercise jurisdiction over non-Indian offenders who commit violence on tribal lands.

Joe Biden: (07:47)
We’re going to reauthorize that again. We’re going to expand the jurisdiction to include other offenses like sex trafficking, sexual assault and child abuse. These efforts, again to use the word my dad would use so much, are a matter of dignity. That’s the foundation of our nation and nation partnership. That’s what this summit is all about.

Joe Biden: (08:07)
I want to thank everyone who’s here for participating. I look forward to continuing to work together. Now it’s my honor to sign an executive order and a couple of my friends are going to be coming out here I’m told, cabinet members. But… Here we go. Where is everybody?

Joe Biden: (08:30)
Jill. Jill’s here. The attorney general. We got them all. Everybody’s here. All right, Jill. I don’t know what was going on back there but they’ll here. I was worried you weren’t going to come out. Hanging out. Good to see you. All right.

Joe Biden: (08:55)
The title of this legislation is Improving Public Safety and Criminal Justice for Native Americans and Addressing the Crisis of Missing or Murdered Indigenous People. I’m proud to sign it. It’s long overdue. There you go. General.

Joe Biden: (09:45)
[inaudible 00:09:45] Thank you all so very much. We’re going to make some substantial change in Indian Country. It’s going to continue. Thank you all. Thank you. [crosstalk 00:09:55] You ask me that all the time and I give you the same answer. I’ve been confident since the day I stepped in office.