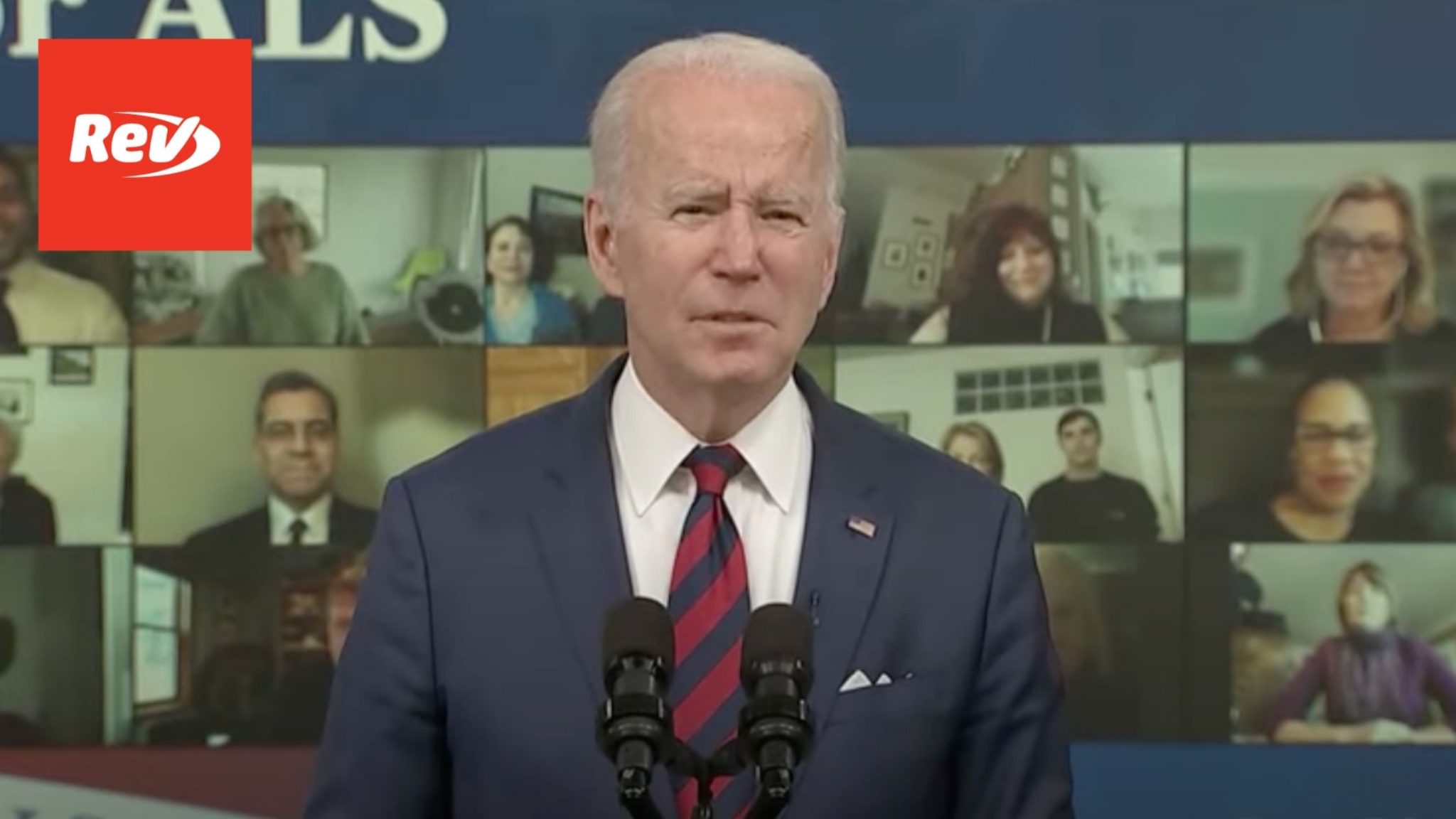 Joe Biden: (00:01)
Good afternoon as we enter this Christmas and New Year, the bill I’m about to sign into law truly represents the spirit of the season in my view, season of hope and light, goodness and grace, and the power of unity and every day Americans doing extraordinary things. That’s accelerating access to critical therapies for ALS act.§ That’s what we’re going to talk about today. ALS known as Lou Garrick’s disease, attacks the nervous system and weakens the muscles, making it hard to lift up a spoon to eat or to take a step to walk. It leads to paralysis and ultimately leads to death. Within an average of two to five years of diagnosis. Since Lou Garrick, the Hall of Famer from New York Yankees, announced his retirement from baseball in 1939 because of the disease, no cure has been found. Treatments are still limited and the outcomes are still the same.

Joe Biden: (01:05)
That’s 82 years with hundreds of thousands of lives lost. But today we’re finally closer than ever to new treatments. And hopefully, hopefully, God willing, a cure. And it’s because of the movement led by the patients and caregivers and members of Congress of both parties, many of whom are joining us today virtually. Patients like Brian Wallick and his wife, Sandra. They met in 2008 working in the Hampshire primary for Barack Obama, believing in a movement of hope and change. Then they both worked for the Obama Biden White House, driven by public service. Beloved by colleagues, anchored by the love of family. In 2015, they became parents of their first child, Ella. In 2017, their second child, Naomi, was born. The entire world was in front of them, perhaps to run for elective office at home in Illinois, or working for this White House, raising two beautiful daughters until everything changed.

Joe Biden: (02:13)
The coughs, the cramps, the twitches. Within days of welcoming baby Naomi, Brian was diagnosed with ALS at the age of 36 and given six months to live. That was four years ago. And Brian and Sandra are joining us today virtually, I say hi to you both, because they turn their pain into purpose. They talked to doctors and researchers. They met more patients and families. They met with their elected leaders, senators Durban and Duckworth and representative Quigley. And they rallied their family and friends and built another campaign powered by hope and change as well. They were bold. They were told that it would be hard, but they stayed bold. There’d be too many obstacles they were told, but because of the nature of the disease, there wouldn’t be enough time where they were told, I suspect. But they never gave up. They launched I Am ALS to put a face on the movement, powered by the people. They partnered with patients like Dan Tate, who advocated for these issues for a long time as an ally and then as an ALS patient himself.

Joe Biden: (03:34)
They were joined by patients like [inaudible 00:03:39] and Sandy Morris, joined by caregivers like Deb Paust, Christina Thompson and groups like ALS Association, the Muscular Dystrophy Association that helped organize the community. A community that wrote countless letters and convened countless meetings with members of Congress and their staffs, many with their own personal connections to this terrible disease to get this bill passed. I want to thank House Speaker Pelosi, Minority Leader, McCarthy, Senate Majority Leader, Schumer and Minority Leader, McConnell. Thank you to the Members of the House, where it had 331 co-sponsors this bill. And it passed by a vote of 423 to three, including the Bill’s lead sponsor, Mike Quigley, Democrat from Illinois. Jeff Fortenberry, Republican from Nebraska. Like many others, [inaudible 00:04:43], Democrat from California, Red Guthrie, Republican Kentucky, Jan Sandowski Democrat from Illinois, Kathy Morris Republican from Washington State, Frank Palone, Democrat from New Jersey. And members of the House ALS caucus.

Joe Biden: (04:59)
And you’re wondering why I’m saying whether they’re Democrats or Republicans. To make the point, when we act together, we get things done. And this is totally, totally, totally a bipartisan effort. For the United States Senate, there were 64 co-sponsors and a pass with unanimous support led by Chris Koons of Delaware, Lisa McKowski of Alaska, Patty Murray of Washington State Richard Bur, North Carolina, Dick Durban and Tammy Duckworth, Democrats of Illinois. We’re joined today by secretary of Health and Human Services, Xavier Beccera, whose department will play a vital role in implementing the law. Folks, that’s democracy in action. The people spoke, their elected leaders voted, and their president’s about to sign and building a law that’s consequential. It’s about accelerating hope and giving patients a fighting chance. The law invests $100 million annually for the next five years to do three important things.

Joe Biden: (06:02)
First, it directs the Department of Health and Human Services to issue grants that support research on the access to promising new therapies for patients who don’t make it into clinical trials. This means hope for patients who would otherwise have no access to treatments that could possibly work for them. Second, it established the first of its kind public private partnership led by the National Institutes of Health and the Food and Drug Administration, the FDA, to work with academia and nonprofits in the private sector to speed the development and evaluation of therapies for ALS and other neurodegenerative diseases. And third, it creates a giant program at the FDA to develop new ways to prevent, diagnose, treat, and cure ALS and other neurodegenerative diseases. This bill really matters. You all know ALS robs patients and families of so much. The immense physical, emotional, and financial toll, loss of dignity and the loss of time. For too long, there have been no survivors of ALS, but this bill could get us closer to changing that. To Brian and Sandra, to the patients and caregivers who built and led this movement.

Joe Biden: (07:20)
Thank you. Thank you. Thank you. And know this, there are countless people who, even if they haven’t experienced ALS, they’ve experienced some other cruel twist of fate. They see you and you give them hope as well. I see on the screen, a fellow who used to work for my son, Bo, and whose mom was a leader at the University of Delaware in physical therapy. And whose dad died of ALS, Alex Makler. The fact is, Alex, you, for me and my family, when you worked for Bo and then worked for us, we experienced watching our son battle cancer and go through the process so many of you experienced. And you gave us hope. Getting the news, trying to find hope, knowing that the time would come, but as hard as it is, we found a way forward by finding purpose from the pain and by finding strength from others like you.

Joe Biden: (08:22)
One of the reasons I ran for president was to end cancer as we know it. Just as we can end ALS as we know it. And so many other diseases. The Defense Department has something called the Defense Advanced Research Agency, DARPA, that advances cutting edge research to protect our national security. That’s led to things like GPS and the modern internet. In my budget, as president, I’m calling for the creation of Advanced Research Project Agency for Health, ARPA-H. That will advance breakthroughs in how we detect, treat and cure cancers, diabetes Alzheimer’s, and other neurological diseases. It’s about showing the American people that as a country, we can come together, Democrats, Republicans, Independents, and do big things because of the best researchers in the world. That our democracy can deliver. There’s nothing beyond our capacity when we do it together as United States of America.

Joe Biden: (09:25)
I believe this bill is an example of that truth. And I’m honored to sign the Accelerating Access to Critical Therapies for ALS Act into law right now.

Joe Biden: (09:37)
May God bless the patients and their families and caregivers and all of you on the screen who’ve dealt with this disease in so many ways. You’re amazing. You’re truly amazing. God bless you all. And I’m going to go over and sign this legislation. Thank you.

Joe Biden: (10:19)
HR3537 Accelerating Access to Critical Therapies for ALS Act. God willing, we’re going to make real progress. Again, thank you all. And God willing, have a happy holiday. I wish I could see you all in person.