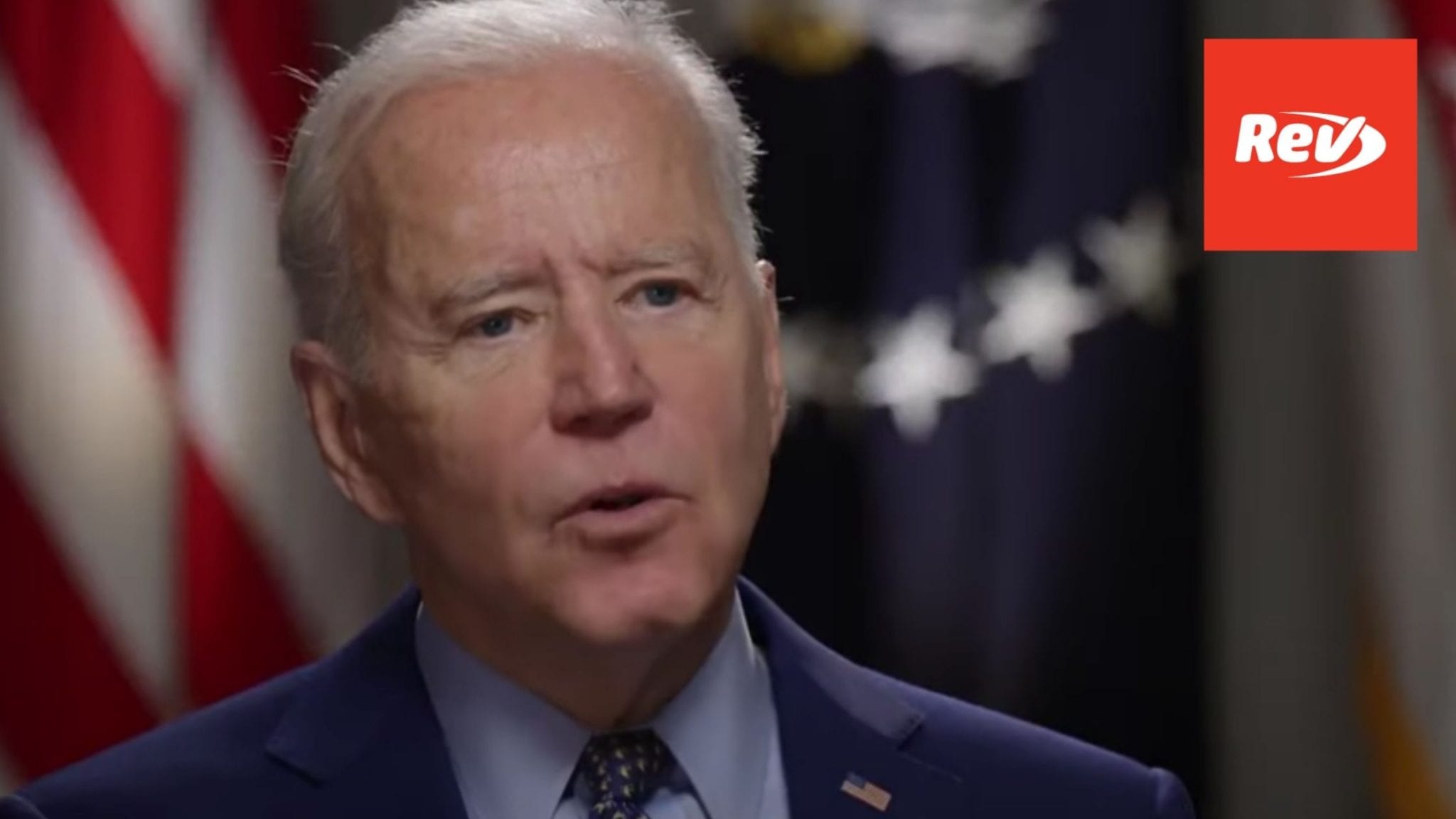 President Joe Biden participated in an interview with NBC’s TODAY journalist Craig Melvin that aired on April 30, 2021 to discuss his first 100 days in office. He answered questions on spending proposals, immigration, COVID-19, race, Rudy Giuliani, and more. Read the transcript of the interview speech here.

Craig Melvin: (00:00)
And your first 100 days, you proposed $6 trillion in new spending and you plan to pay for it by raising taxes on people, on businesses, on investments. Why tax and spend so much when the economy is still recovering as a result of the pandemic?

President Joe Biden: (00:18)
That’s the reason why it’s recovering because we’re investing. Look how rapidly it’s recovered since we passed the last piece of legislation, and that legislation was $1.9 trillion. If we don’t invest in this country, we’re going to fall behind even further.

Craig Melvin: (00:38)
Democrats, Republicans for generations have been, shall we say, skeptical about the ability of big government to do big things. What makes you so confident that skepticism has changed?

President Joe Biden: (00:51)
Well, first of all, the facts don’t reflect that. I don’t have any inordinate faith in government, but there’s certain things only the government can do. We rank number eight in the world in terms of infrastructure for God’s sake. Is the private sector going to go out and build billions of dollars worth of highways, ports, airports, bridges? Are they going to do that? And so these are things that only government can really do.

Craig Melvin: (01:15)
I watched the speech last night. I watched the address and then I watched the rebuttal from the junior Senator of South Carolina last night, Tim Scott. He said, among other things, America isn’t racist. Is it?

President Joe Biden: (01:29)
No, I don’t think the American people are racist, but I think after 400 years, African-Americans have been left in a position where they’re so far behind the eight ball in terms of education, health, in terms of opportunity. I don’t think America is racist, but I think the overhang from all of the Jim Crow and before that slavery have had a cost and we have to deal with it.

Craig Melvin: (01:57)
Let’s talk about the pandemic. It is a defined your first 100 days. There’s a recent poll that came out that showed 40% of Marines said, they’re not going to get vaccinated. Once the FDA gives final approval for the vaccinations, not emergency use authorization, but final approval, will you order service members to get the COVID vaccine?

President Joe Biden: (02:23)
Well, I’m not saying I won’t. I think you’re going to see more and more of them getting it. I think it’s going to be a tough call as to whether or not they should be required to have to get it in the military because you’re in such close proximity with other military personnel, whether you’re in quarters where you’re all sleeping or whether you’re out in maneuvers.

Craig Melvin: (02:49)
Kids in K through 12 schools, obviously are not going to be able to get the vaccine by the fall. Should all schools in this country be open this fall for five days a week in person learning, regardless?

President Joe Biden: (03:01)
Based on the science and the CDC, they should probably all be open. There’s not overwhelming evidence that there’s much of a transmission among these young people.

Craig Melvin: (03:09)
CDC guidance this week about outdoor mask wearing. A lot of folks excited that they can now shed these masks if they’ve been double vaccinated. Are you going to be one of these folks now? We no longer going to see the President of the United States outside with a mask on?

President Joe Biden: (03:24)
Sure, sure. I mean, but what I’m going to do though, because the likelihood of my being able to be outside and people not come up to me is not very, very high. So it’s like, look, you and I took our masks off when I came in because look at the distance we are. But if we were in fact sitting there talking to one another close, I’d have my mask on and I’d make you to have a mask, even though we both been vaccinated. And so it’s a small precaution to take that has a profound impact. It’s a patriotic responsibility for God’s sake. It’s making sure that your wife, your children, if in fact they haven’t been vaccinated, making sure that they’re not going to get sick.

President Joe Biden: (04:33)
It is getting urgent action. Now, for example, a month ago, we had thousands of young kids in custody in places they shouldn’t be, controlled by the border patrol. We have now cut that down dramatically. Hey, look, here’s what happened, Craig. The failure to have a real transition, the two departments that didn’t give us access to virtually anything were the Immigration and the Defense Department. So we didn’t find out they had fired a whole lot of people, that they were understaffed considerably.

Craig Melvin: (05:04)
But in April alone, Mr. President, 170,000 people, migrants apprehended at the border to 20 year record. There are 22,000 unaccompanied children in our country right now. That’s a record. That sounds to most folks like a crisis.

President Joe Biden: (05:20)
Well, look, it’s way down now. We’ve now gotten control. For example, they didn’t plan for which it comes every year, this flow, whether it’s 26,000 or 10,000, they didn’t have the beds that were available. They didn’t plan for the overflow. They didn’t plan for the Department of Health and Human Services to have places to take the kid from the border patrol and put them in beds where there were security and there were people that could take care of them. So there’s a significant change right now, significant change in the circumstance for children coming to and at the border.

Craig Melvin: (05:59)
During the campaign, you pledged to reunite hundreds of children who have been separated from their parents by the previous administration. According to our reporting and in your first 100 days, not one child has been reunited. How is that?

President Joe Biden: (06:16)
I don’t think that’s true, but that could be. What we have done is we have united children with their families as they’ve come across the border, but one of the things is we don’t know yet where those kids are. We’re trying like hell to figure out what happened. It’s almost like being a sleuth and we’re still continuing to try like hell to find out where they are.

President Joe Biden: (06:52)
Do not send your kids, period. There are most they’re in jeopardy going and making that thousand mile trek. And so what we’re doing now is we’re going back to those countries in question where most of its coming from and saying, look, you can apply from your country. You don’t have to make this trek.

Craig Melvin: (07:10)
Federal investigators searched the home and the office of Rudy Giuliani as part of an investigation into his time as President Trump’s attorney, his dealings with Ukraine. Were you aware of that raid before it happened?

President Joe Biden: (07:25)
I gave him my word, I was not. I made a pledge. I would not interfere in any way, order or try to stop any investigation the Justice Department had in way. I learned about that last night when the rest of the world learned about it.

Craig Melvin: (07:39)
Have you been briefed on any other investigations involving?

Craig Melvin: (08:00)
We should note that Rudy Giuliani responded to that overnight saying whether President Biden knew or not, he is being unfairly targeted as well.