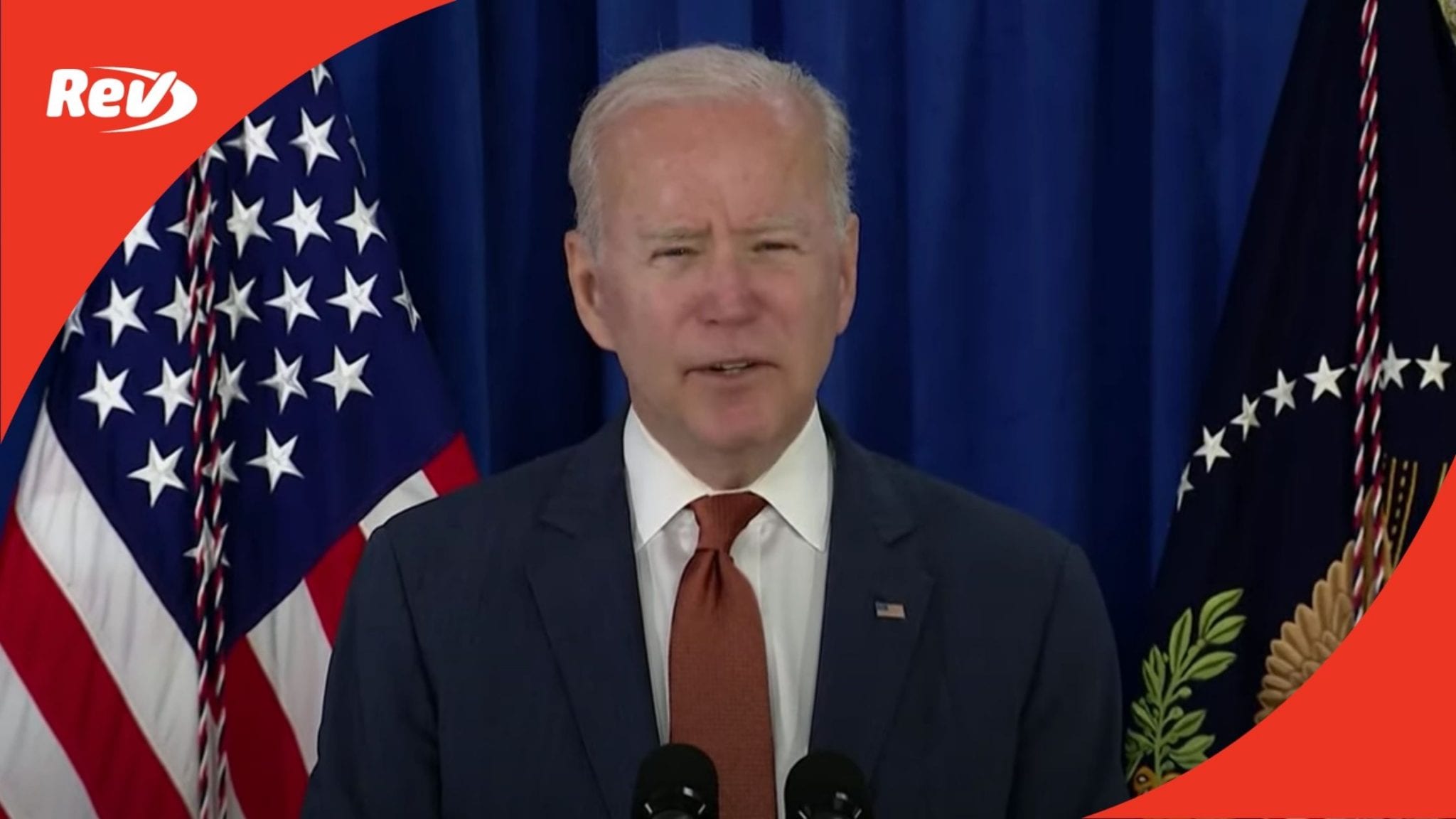 President Joe Biden gave a briefing on the May jobs report on June 4, 2021. He announced that the unemployment rate is below 6% for the first time since the pandemic began. Read the transcript of his speech remarks here.

President Biden: (00:01)
Hello, folks. Good morning. Today, we received great news for our economy and our recovery and for the American people. This morning, we learned that in May, our economy created 559,000 new jobs, unemployment rate fell to 5.8%, and wages went up for American workers. That means we have now created over 2 million jobs in total since I took office, more jobs than ever been created in the first four months of any presidency in modern history, triple the rate of my predecessor, eight times the rate of President Reagan.

President Biden: (00:47)
The unemployment rate is now below 6% for the first time since the pandemic hit. The first time in 14 months, we saw the largest decline in the number of long-term unemployed in more than an entire decade in the last 10 years. Long-term unemployment dropped by the second-largest amount ever recorded. Not only that, but the signs of further progress are already here.

President Biden: (01:13)
This report is based in a week in early May. That’s how they determined the job rate of growth or loss. We have growth. And that week in May, we only had 35% of working-age adults that had been fully vaccinated. Now, they were still all wearing masks. Since then, 21 million more adults have gotten vaccinated, making it easy for them to return to work safely. In short, this is progress, historic progress, progress that’s pulling our economy out of the worst crisis there has been in 100 years. And it’s testament to the new strategy that is growing this economy, not only growing up, but growing from the bottom up and the middle out. Remember when I took office in January, our economy was in a tailspin.

President Biden: (02:04)
Job growth had stalled. COVID was raging. Average initial claims for unemployment insurance were over 830,000 per week. Now those claims have fallen below 430,000, about half of what they were when I took office. Before I took office, almost 24 million Americans were going hungry. Remember those long lines of cars, miles long people waiting for just a box of food to be put in their trunk? That number is already dropped by 25%, still too many but clear progress.

President Biden: (02:39)
Before I took office, independent experts were projecting that the American economy would grow by three or 4% in 2021 this year. This week, the organization of economic cooperation and development, the so-called OECD, which makes up a group that includes the most of the world’s largest in its membership, and has been one of the leading bodies analyzing economic growth worldwide and individual nations, increased their projection for US economic growth this year to 6.9% in 2021. That’s the fastest pace in nearly four decades. In fact, the US is the only major economy where projections of future growth are stronger today than they were before the pandemic hit in 2020.

President Biden: (03:28)
And in May, manufacturing activity was nearly as strong as it was in more than 15 years, stronger than in 15 years. No other major economy in the world is growing as fast as ours, no other major economy is gaining jobs as quickly as ours. And none of this success is an accident. It isn’t luck. It’s doing no small part, first of all, the cooperation of the American people in responding to my effort to get COVID under control, wearing masks initially, and getting vaccinated, and is no small part to the bold action we took by passing the American Rescue Plan.

President Biden: (04:08)
The plan provided those resources to get shots in people’s arms, underwrite the vaccination effort, enough vaccine supply for every single American, more vaccinators, people to put shots in the arms and more vaccination sites. And now, 52% of American adults are fully vaccinated. 75% of our seniors are fully vaccinated and the American Rescue Plan delivered economic benefits directly to the American people. Because of that law, more than 167 million of those rescue payments of up to $1,400 have gone out to individual families. A recent study, the census bureau data found just how much these checks mattered. They drastically reduce depression, according to the study, anxiety and hardship for families.

President Biden: (05:06)
More than 40% fewer families struggled to afford food, rent, utilities, car payments, student loans, and healthcare expenses. Small businesses and restaurants were getting killed. Now, we’re delivering loans and support they need to reopen and to stay open. Schools are struggling to reopen. So we made vaccinated teachers a priority. We deliver schools the much support they needed. State and local governments had to lay off tens of thousands of educators and first responders. Many are now back on the job, thanks to the rescue plan. In fact, in May, state and local governments added 103,000 education jobs and returned them to work.

President Biden: (05:49)
These funds are continuing to get out this month to support state and local governments, which will help get more people back to work. Small and medium medium-sized businesses are now able to take advantage of a special tax credit called the employee retention tax credit. It provides businesses a generous tax credit to retain or hire more workers.

President Biden: (06:12)
Through our restaurant revitalization fund, we anticipate being able to help over 100,000 hard hit restaurants stay open or reopen. And beginning next month, most families or children will be getting a tax cut, which should be going and deposited into their accounts directly into their bank accounts every month. We know that access to childcare is one of the biggest barriers in the way of parents going back to work. Our administration is delivering $39 billion in childcare relief to help childcare providers get back on their feet, the providers, and serve more families.

President Biden: (06:49)
And this month, our economy added nearly 20,000 more childcare jobs that weren’t there last month. In fact, allowing parents to have access to get help. And temporary boost in unemployment benefits that ended, that we enacted, I should say, help people lost their jobs through no fault of their own and who still may be in the process of getting vaccinated, but it’s going to expire in 90 days. That makes sense that it expires in 90 days.

President Biden: (07:18)
To sum it up, look, COVID cases are down. COVID deaths are up. Unemployment filings are down. Hunger is down and vaccinations are up. Jobs are up. Wages are up. Manufacturing is up. Growth is up. People gaining healthcare coverage is up and small business confidence is up. America is finally on the move again. As we continue this recovery, we’re going to hit some bumps along the way. Of course that’ll happen.

President Biden: (07:51)
We can’t reboot world’s largest economy like flipping on a light switch. There’s going to be ups and downs in jobs and economic reports, but we’re going to be a supply chain issues and price pressures on the way back to stability and steady growth. In the coming weeks, my administration is going to take steps to combat these supply constraints, building on the work we’re doing on the computer chips. That is we’re providing more computer chips to be manufactured here in the United States, so it doesn’t slow up the manufacturing of automobiles, for example.

President Biden: (08:24)
Everyone needs to get their shots though. Now’s the time to accelerate the process we’ve been making. Now’s the time to build on the foundation we’ve laid. Because while our progress is undeniable, it is not assured. That’s why I propose the American Jobs Plan and the Americans Family Plan for generational investments we need today. We need to make those investments today to be able to continue to succeed tomorrow. We have a chance to seize on economic momentum of the first months of my administration. Not just to build back, but to build back better. This much is already clear. We’re on the right track. Our plan is working and we’re not going to let up now. We’re going to continue to move on. I’m extremely optimistic. I hope you are as well. And may God bless you and God bless America and may God protect our troops. Thank you all for being here.

President Biden: (09:25)
I’m going to be having a talk this afternoon. We’ll be able to report to you after that.

President Biden: (09:30)
I’ll tell you after I meet this afternoon.