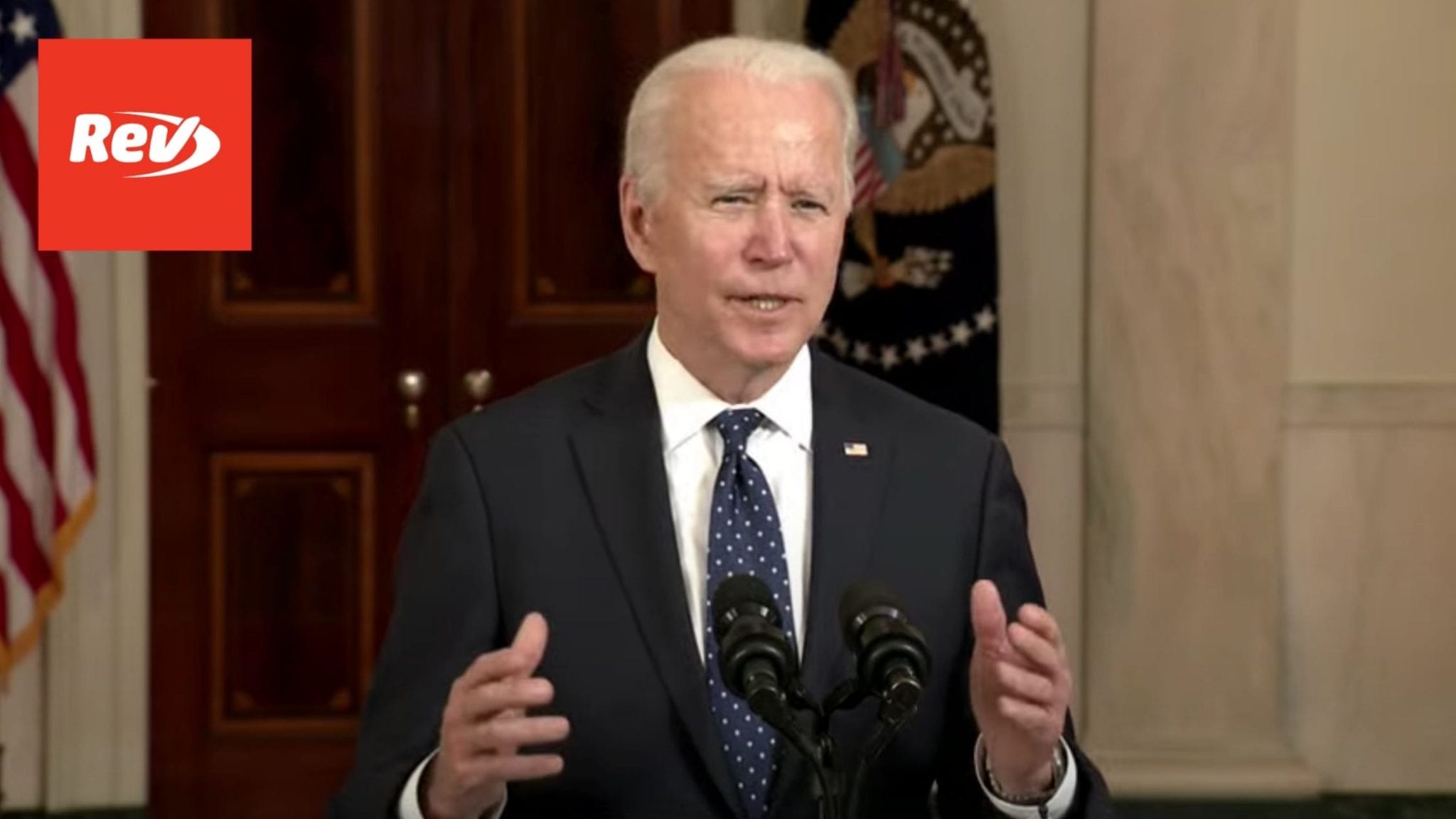 President Joe Biden & VP Kamala Harris gave speeches after the Chauvin verdict was announced on April 20, 2021. Derek Chauvin was found guilty on all charges in the murder of George Floyd. Read the transcript of their speech remarks here.

Kamala Harris: (02:40)
Because of smartphones, so many Americans have now seen the racial injustice that black Americans have known for generations, the racial injustice that we have fought for generations, that my parents protested in the 1960s, that millions of us, Americans of every race protested last summer. Here’s the truth about racial injustice. It is not just a black America problem or a people of color problem. It is a problem for every American. It is keeping us from fulfilling the promise of liberty and justice for all, and it is holding our nation back from realizing our full potential. We are all a part of George Floyd’s legacy, and our job now is to honor it and to honor him. Thank you. Now it is my great honor to introduce the President of the United States, Joe Biden.

Joe Biden: (04:13)
A jury in Minnesota found former Minneapolis police officer Derek Chauvin guilty on all counts in the murder of George Floyd’s last name. It was a murder in full light of day, and it ripped the blinders off for the whole world to see the systemic racism the Vice President just referred to. This systemic racism is a stain on our nation’s soul. The knee on the neck of justice for black Americans, profound fear and trauma, the pain, the exhaustion that black and brown Americans experience every single day. The murder of George Floyd launched a summer of protest We hadn’t seen since the civil rights era in the ’60s, protests that unified people of every race and generation in peace and with purpose to say enough, enough, enough of the senseless killings. Today, today’s verdict is a step forward. I just spoke with the Governor of Minnesota, who thanked me for the close work with his team.

Joe Biden: (05:37)
I also spoke with George Floyd’s family again. Remarkable family of extraordinary courage. Nothing can ever bring their brother or their father back, but this can be a giant step forward in the march toward justice in America. Let’s also be clear, that such a verdict is also much too rare. For so many people, it seems like it took a unique and extraordinary convergence of factors, a brave young woman with a smartphone camera, a crowd that was traumatized, traumatized witnesses, a murder that lasts almost 10 in broad daylight for ultimately the whole world to see, officers stay standing up and testifying against a fellow officer instead of just closing ranks, which should it be commended. A jury who heard the evidence, carried out their civic duty in the midst of an extraordinary moment, under extraordinary pressure. For so many, it feels like it took all of that for the judicial system to deliver a just, just basic accountability.

Joe Biden: (07:08)
We saw how traumatic and exhausting just watching the trial was for so many people. Think about it, those of you who were listening. Think about how traumatic was for you. You weren’t there. You didn’t know any of the people, but it was difficult, especially for the witnesses who had to relive that day. It’s a trauma, on top of the fear so many people of color live with every day, when they go to sleep at night and pray for the safety of themselves and their loved ones. Again, as we saw in this trial from the fellow police officers who testified, most men and women to wear the badge, serve their communities honorably.

Joe Biden: (07:58)
But those few who failed to meet that standard must be held accountable and they were today. One was. No one should be above the law and today’s verdict sends that message, but it’s not enough. We can’t stop here. In order to deliver real change and reform we can, and we must do more to reduce the likelihood that tragedy like this will ever happen to occur again, to ensure that black and brown people or anyone, so they don’t fear the interactions with law enforcement, that they don’t have to wake up knowing that they can lose their very life in the course of just living their life. They don’t have to worry about whether their sons or daughters will come home after grocery store run, or just walking down the street or driving a car or playing in the park or just sleeping at home.

Joe Biden: (08:56)
This takes acknowledging and confronting head-on systemic racism and the racial disparities that exist in policing and in our criminal justice system, more broadly. State and local government and law enforcement needs to step up, but so does the federal government. That’s why I’ve appointed the leadership of the Justice Department that I have, that is fully committed to restoring trust between law enforcement and the community they are sworn to serve and protect. I have complete confidence in the Attorney General, General Garland’s leadership and commitment. I’ve also nominated two key Justice Department nominees, Vanita Gupta and Kristen Clark, who are eminently qualified, highly respected lawyers who have spent their entire careers fighting to advance racial equity and justice. Vanita, and Kristen have the experience and the skill necessary to advance our administration’s priorities to root out unconstitutional policing and reform our criminal justice system.

Joe Biden: (10:09)
They deserve to be confirmed. We also need Congress to act. George Floyd was murdered almost a year ago. There’s meaningful police reform legislation in his name. You just heard the Vice President speak of it. She helped write it. Legislation to tackle systemic misconduct in police departments, to restore trust between law enforcement and the people that are trusted to serve and protect. But it shouldn’t take a whole year to get this done. My conversations with the Floyd family, I spoke to them again today. I assured them we’re going to continue to fight for the passage of the George Floyd Justice and Policing Act so I can sign a law as quickly as possible. There’s more to do. Finally, it’s the work we do every day to change hearts and minds, as well as laws and policies. That’s the work we have to do. Only then will full justice and full equality will be delivered to all Americans. That’s what I just discussed with the Floyd family. The guilty verdict does not bring back George.

Joe Biden: (11:25)
But, through the family’s pain, they’re finding purpose so George’s legacy will not be just about his death, but about what we must do in his memory. I also spoke to Gianna, George’s young daughter again. When I met her last year, I’ve said this before at George’s funeral. I told her how brave I thought she was and sort of knelt down to hold her hand. I said, “Daddy’s looking down on you. He’s so proud.” She said to me then, I’ll never forget it, “Daddy changed the world.” I told her this afternoon, “Daddy did change the world.” Let that be his legacy. A legacy of peace, not violence and justice. Peaceful expression of that legacy are inevitable and appropriate. But, violent protest is not. There are those who will seek to exploit the raw emotions of the moment, agitators and extremists who have no interest in social justice, who seek to carry out violence, destroy property, and fan the flames of hate and division, who do everything in their power to stop this country’s march toward racial justice.

Joe Biden: (12:47)
We can’t let them succeed. This is a time for this country to come together, to unite as Americans. We can never be any safe Harbor for hate in America. I’ve said it many times. The battle for soul of this nation has been a constant push and pull for more than 240 years, a tug of war between the American ideal that we’re all created equal, and the harsh reality that racism has long torn us apart. At our best, the American ideal wins out. So, we can’t leave this moment or look away thinking our work is done. We have to look at it. We have to look at is as we did for those nine minutes and 29 seconds. We have to listen. “I can’t breathe. I can’t breathe.”

Joe Biden: (13:50)
Those were George Floyd’s last words. We can’t let those words die with him. We have to keep hearing those words. We must not turn away. We can’t turn away. We have a chance to begin to change the trajectory in this country. That’s my hope and prayer that we live up to the legacy. May God bless you, and may God bless the George Floyd’s family. Thank you for taking the time to be here. This can be a moment of significant change. Thank you.