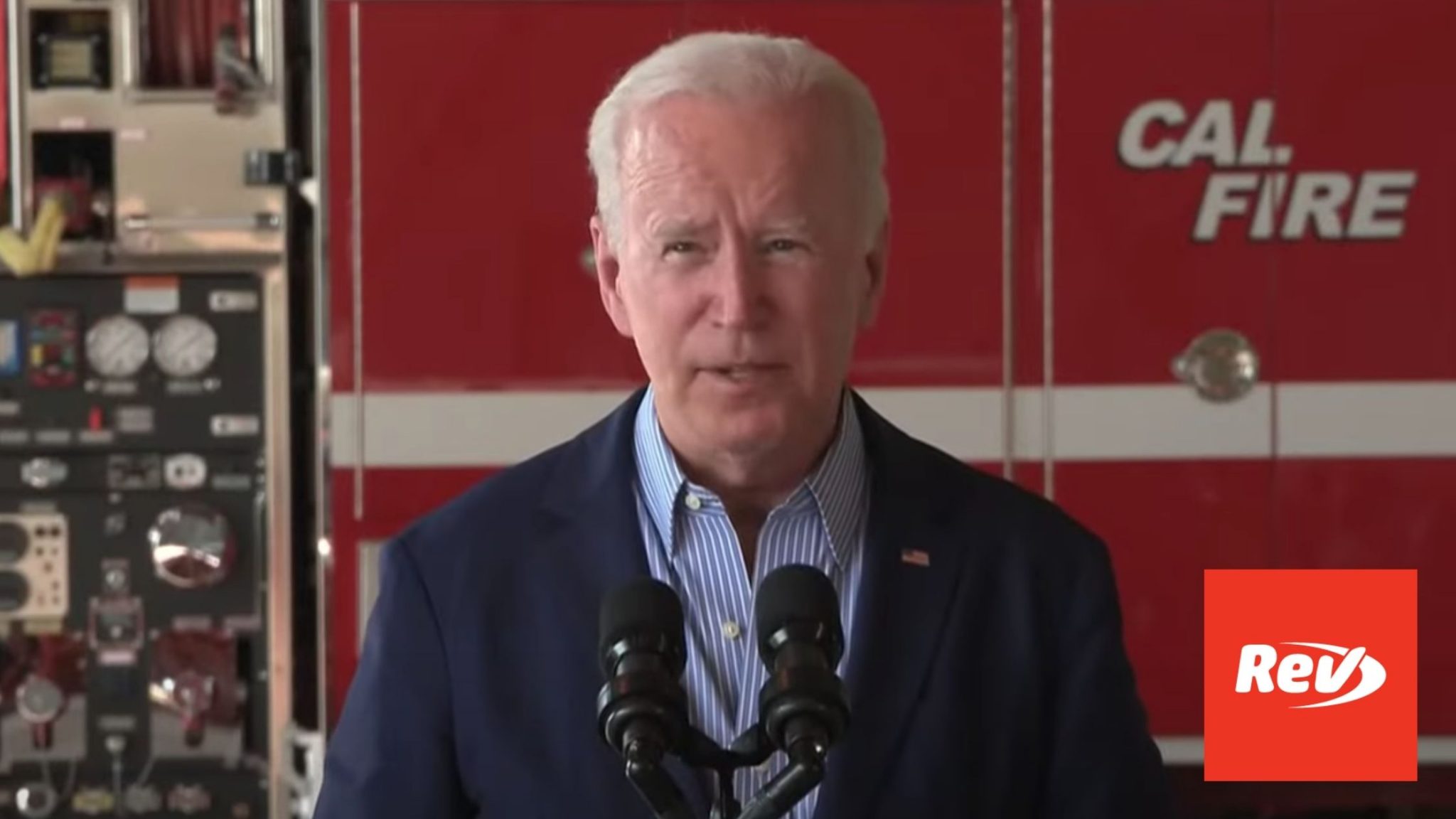 President Joe Biden and California Gov. Gavin Newsom spoke about the Western wildfires after surveying damage on September 13, 2021. Read the transcript of their speech briefing here.

Governor Newsom: (00:00)
… climate change, the likes of which were predicted, but predicted a decade or two from today. Those challenges are not only vexing, but those challenges create opportunities, and I know the president will be speaking a lot about those opportunities in the next day and upcoming weeks as he refers to the work he’s doing to advance this historic infrastructure package. But I want to just make a point, Mr. President, with your indulgence, that despite the president of the United States being here, I would stipulate the most powerful force on the planet is not even the president of the United States, it’s mother nature. Now, as others have said, all she has is chemistry, biology, and physics. She bats last, she bats a thousand. We are dealing with extremes, the likes of which we’ve never dealt with in our state’s history, including the most extreme weather in terms of the hottest summer we have ever experienced in California’s history between June and August, a West Coast drought that some have referred to as a mega drought that arguably began in 2000.

Governor Newsom: (01:11)
The hots are getting a lot hotter, the dries are getting drier, and as you saw on the East Coast of the United States, where people quite literally were drowning their cars, the wets are getting a lot wetter with atmospheric rivers and the consequences of warming seas and more intense tropical storms, as well as hurricanes. And so I’m here sobered by the challenges and that reality, but also, as I noted, optimistic by not only California’s capacity to work through situationally, and we are. The Caldor Fire that we just visited that took the town of Grizzly Flats, that fire now is 67% contained. The Dixie Fire, now three-quarters contained. Situationally, we are battling these wildfires and making progress, but the sustainable mindset we have is to address these smash-mouth realities, and to lead the conversation anew in this country to radically change the way we produce and consume energy, and to continue to lead our nation-leading efforts as it relates to low-carbon green growth.

Governor Newsom: (02:19)
California’s leadership is demonstrable. California’s leadership has been challenged in the last four years, but those headwinds now are tailwinds with the Biden administration. We’re not sparring partners, we’re working partners as it relates to issues of climate change and dealing with the challenges of wildfires. And so, Mr. President, I’m just honored that you’re here. We are all blessed, 40 million Californian strong, that you took the time to be here. But as I began, let me end by saying this is not your first foray into this issue. We held two summits with West Coast governors, proactively held with the president’s assistance. Not only did he show up to make remarks, he stayed until the end of both conversations. I’ve been around this business long enough to note the distinction between people that are interested in things and people that are committed to solving things.

Governor Newsom: (03:16)
The president of the United States’ commitment is demonstrable, now the third time here, physically seeing the impacts of these wildfires for himself. But his commitments he made in June, the commitments he made in July, the promises that he made to follow-up, he delivered on. We had specifically four things we requested of the president of the United States. All four, he delivered on. And so, Mr. President, let me also take this moment not just to thank you for being here at this critical juncture, but thank you for delivering on your promises. Thank you for meeting this moment head-on, and thank you for leading a conversation anew in this country around resiliency and around painting an optimistic picture of the future as we transition to a low-carbon green-growth future. And so with that, let me introduce the president of the United States, Joe Biden.

President Biden: (04:19)
Thanks, Governor. Well, folks, thank you, Governor, for those comments. I want to say good afternoon to all of you here in this cool hangar. Earlier today, we were briefed by the National Interagency Fire Center in Boise, Idaho. The center is a locational hub for our federal firefighting resources of the region, and we just surveyed some of the damage of the Caldor Fire here in California, which in less than a month has wiped out over 200,000 acres and 1000 structures. Homes, precious memories destroyed, air quality degraded, local economy stopped in its tracks, and nearly 200 people in the area forced to live in shelters. Everyone in Northern California knows the time of the year when you can’t go outside, when the air will be filled with smoke, and the sky will turn apocalyptic shade of orange. Parents worried about keeping their children safe in a pandemic worry about air quality as well.

President Biden: (05:43)
Thus far, the nationwide over 44,000 wildfires have burned nearly 5,300,000 acres, roughly the size of the state of New Jersey. In California this year, more than 2.2 million acres have burned. The Dixie Fire burned nearly one million alone, and we’re working closely with Governor Newsom to make sure California has every resource, every resource available to keep families safe. And the governor has led his state with poise and strong leadership. He’s been an innovator in items for long-term solutions, and he and I are both optimistic. These fires are blinking code red for our nation. They’re gaining frequency and ferocity, and we know what we have to do, and it starts with our firefighters putting their lives on the line in rugged and dangerous conditions. I never forget coming out to Arizona in 2013 to speak at the memorial of the 19 Granite Mountain Hotshots who gave their lives. Firefighters are unmatched in their bravery.

President Biden: (07:00)
That’s why I took the action I did in June to ensure that all federal firefighters earn at least a minimum wage, and we’re working on fundamentally changing the benefits that are available to them. FEMA has approved 33 fire management assistance grants to help Western states pay for the cost of fighting these awful fires. We used the Defense Production Act to address the shortage in fire hoses. Because of the pandemic, we found ourselves in a situation where there’s a backlog in an awful lot of things. We restarted the idle production line in Oklahoma, bringing back to work and delivering thousands of new feet of new fire hoses to the front lines. It’s hard to believe, short on fire hoses. In addition, we’ve tapped DOD, the Department of Defense, for 10 aircraft, 20 C-130s, a modular airborne firefighting systems, with those systems, and to help fire suppression, the RC-26 aircraft to provide critical imagery from space.

President Biden: (08:15)
They’re based in California, and they’ve now flown over 1,000 missions across the West. 250 active duty military troops on the ground at Dixie Fire in California, working alongside firefighters. We’re sharing satellite imagery to help detect and monitor fire growth, and the EPA is using new technologies to deliver fire, smoke, and air quality information directly to people’s cell phones. Our friends from Canada and Australia are provided help through both firefighters as well as aircraft. And my Build Back Better plan includes billions of dollars for wildfire preparedness, resilience, and response, forest management to restore millions of acres, and to protect homes and public water sources. This bipartisan bill includes more than $8 billion to increase resilience in wildfires. And to add to that, the continuing resolution package includes $14 billion in disaster needs, including 9 billion for communities hit by wildfire and drought. We’re not going to leave these people in distress.

President Biden: (09:37)
We know that decades of forest management decisions have created hazardous conditions across the Western forest, but we can’t ignore the reality that these wildfires are being supercharged by climate change. It isn’t about red or blue states. It’s about fires, just fires. In the past two weeks, I’ve been to Louisiana, where Hurricane Ida hit, and with winds up to 179 miles an hour, gusty. New Jersey and New York, walking down the streets, main streets, meeting with families and first responders, seeing the destruction of these disasters caused, dreams crushed, lives interrupted. Scientists have been warning us for years that extreme weather is going to get more extreme. We’re living it in real time now. Extreme weather cost America last year $99 billion. Let me say it again. Extreme weather in the United States cost the United States of America a total of $99 billion. And this year, unfortunately, we’re going to break that record.

President Biden: (10:54)
It’s a devastating loss to our economy and for so many communities. When we fail to curb pollution from smokestacks and tailpipes and continue to use fossil fuels as we do, we increase risks that firefighters face. But each dollar we invest in resilience saves up to $6 down the road when the next fire doesn’t spread as widely, and those investments also save lives. When I think about climate change, I think about not the cost, I think about good-paying jobs it will create. But I also think about the jobs we’re losing due to impacts in the supply chains and industries because we haven’t acted boldly enough. We have to build back, and you heard me say it a hundred times, not just build back, but build back better as one nation. We got to do it together. We’ll get through this together. We just have to keep the faith.

President Biden: (11:59)
Folks, we have the bipartisan infrastructure bill that’s been passed. It is bipartisan, and I believe we’ll get done the so-called reconciliation bill that has another several trillion dollars in it. Let me close by saying when people talk about the cost of the Build Back Better proposal beyond the infrastructure, let me remind you the cost may be as much as $3.5 trillion, but to put that in perspective, it’s spread out over 10 years, number one, and number two, it’s expected our economy will grow to $366 trillion GDP by that time. That’s less than 1.5% total in terms of deficit of that total amount. In addition to that, 90% of it’s paid for. And so folks, we have to think big. Thinking small is a prescription for disaster. We’re going to get this done. This nation is going to come together, and we are going to beat this climate change. Thank you.