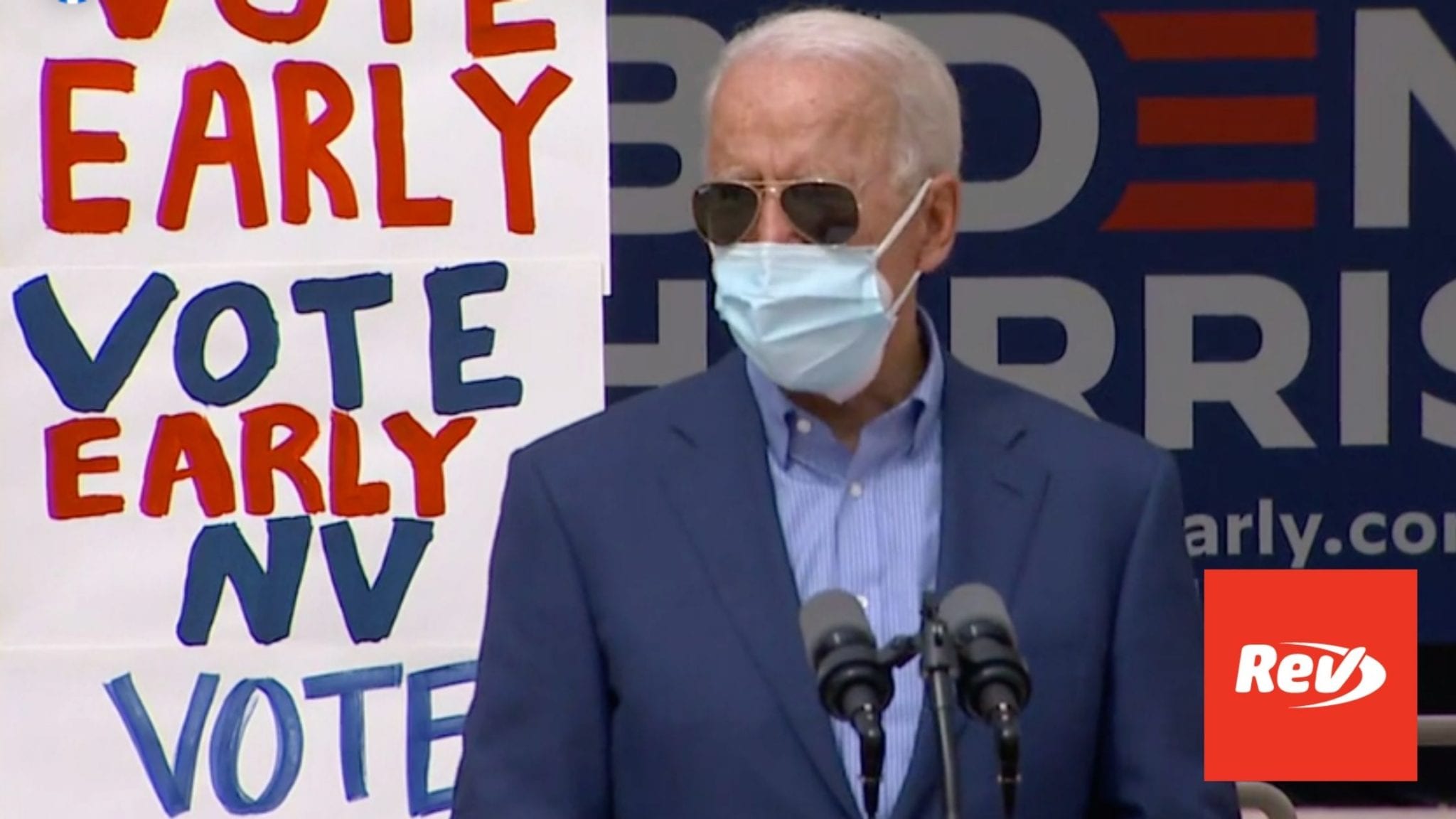 Joe Biden visited a community center in Las Vegas on October 9 for a campaign stop. Read the transcript of his speech remarks here.

Joe Biden: (00:00)
I’ll tell you. And I asked her, “Is that my sister?” I said, “Yeah, yeah.” Look, the thing I love about being here, and it’s been about a year since September I was here last at this very spot, is the one thing we have in common. I mean, this sincerely. I first ran for the United States Senate years ago and I had one billboard. It said, “For all our families.” For real, that’s all it said. All my literature, “For all our families.” And the thing I love about you all, it’s all about family. It’s about family. It’s about family and faith and loyalty, and that’s what I think every time I think you here. And so I want to thank you.

Joe Biden: (00:43)
Now, I’ll tell you what, Edgar planned on bringing in 20 horses in here, but he couldn’t get them in today. Tell you what, I’ve had people campaign for me but never had them go through the neighbors with me on horses. But my dad, who was a real equestrian, would have really been flattered to know you’re doing this. Folks, look, it’s great to be back at the center and I don’t have to tell you all, there’s so much at stake. And here we are, we’ve gone through so much since I was here last, because of the incompetence of this administration. 210,000 people dead. We’re in a situation where that’s 40,000 Latinos nationwide, 40,000. 30 million people lost their jobs. Three million Latinos lost their jobs. One in three Latino businesses have closed, and the deep racial injustices that Trump continues to fan the flames of. It’s just wrong. We have to end this cycle where in good times, you’re being left behind. In bad times, you’re the first in trouble, and as we come out, always the last to come out.

Joe Biden: (01:56)
This crisis, we have I think though an enormous opportunity to build back better. I’m going to be very short, so I’m not going to keep you standing very long. Don’t worry. But I really feel strongly about this. I think we’re in a circumstance where you all understand it, but the American public is beginning to understand it. You are the core of the American story. You have a potential. You’re already an economic powerhouse, but the potential to lead the country in the 21st century into the direction that we need to go. You have close to 20% of the population in the United States, 24 out of every 100 kids in grade school through high school are Latino, and it’s ridiculous that we continue to policies that this administration has moved forward on and not embrace that and see it as our future. I’m not trying to be solicitous with it. I’m not trying to be nice. You are the future of the country. I mean, you really are.

Joe Biden: (02:54)
If, in fact, we’re in a situation where the Latino community in the United States of America and the GDP, the wealth that they generate nationwide, if we just took just the Latino population, you’d be the eighth largest economy in the world, in the United States. Why can’t we see that the future is just absolutely breathtaking if we just use our heads and begin to operate in a way that I think the American people are ready to do? The blinders have been taken off the American people. They get it. They understand. They understand that all those folks in the front lines, look at how many dreamers are out there risking their lives? I mean, you know it, but the American people don’t know it, and I keep telling them all over the country. The dreamers, there’s thousands and thousands and thousands and thousands of them risking their lives, making sure that people are staying alive, they can stay home.

Joe Biden: (03:53)
And so, folks, look, we’re going to be in a situation where we can’t make this, we can’t do it without you all. We cannot win without the community. And I’m going to say something somewhat self-serving about you all. The fact is you can determine the outcome of this election, not just, not just for President, but for the Senate, for the Congress. And that’s the biggest mark, the single most consequential thing anyone can do is vote. And when you vote and they add it up and they see who delivered the vote, that’s the thing that guarantees significant input on what happens next. So folks, early voting starts. The clock is ticking. Voting starts here in just eight days on the 17th and I’d encourage you to tell all your friends. Go to Iwillvote.com now. Make sure they’re registered, their addresses are up to date on the ballot, and they have a plan to vote in the early voting right here, right at this spot.

Joe Biden: (05:03)
So come back next weekend, bring your family, and bring five friends. I really mean it. Bring other people with you, because he’s trying to scare us. He’s trying to convince everybody there’s ways they can play with the vote and undermine the vote. They can’t. If we show up, we win. And look what’s happened in early voting all across America. Long lines, long lines. We can’t just win, we have to win overwhelmingly, so he can’t be in a position where you can put the phony challenges that he’s talking about. So, folks, the American people, they’re the ones who decide our future, not this President and Attorney General, who is less than straightforward. You’re the ones. So let’s get out and vote. I know the sun is hot. I don’t want to keep you standing. And I want to thank the elected officials. This we call a bus man’s holiday. That means when a bus man has a holiday, he has the day off, the guy driving, he doesn’t get back on the bus.

Joe Biden: (06:05)
Well, these folks are all on the bus. They’re elected officials. They’re another elected official. I can’t thank you enough for your support. I give you my word I will do everything in my power to deliver on all that I’ve said. I mean it from my heart. You are family. Family and faith are what’s driven this community and is going to drive this country. And so, folks, let’s go get them. This is off. I guess I should have stayed where I was. My grand pop was not Hispanic. He was an Irishman. And every time I’d walk out of his door up in Scranton, Pennsylvania, he’d say, “Joey, keep the faith.” My grand mum, when she was alive, would yell, “No, Joey. Spread it!” Let’s go spread the faith, okay? Thank you. Thank you. Thank you. By the way, I promise you, if I win, you’re getting an invitation to Washington, okay? Not a joke, not a joke. Thank you. You’re the best.