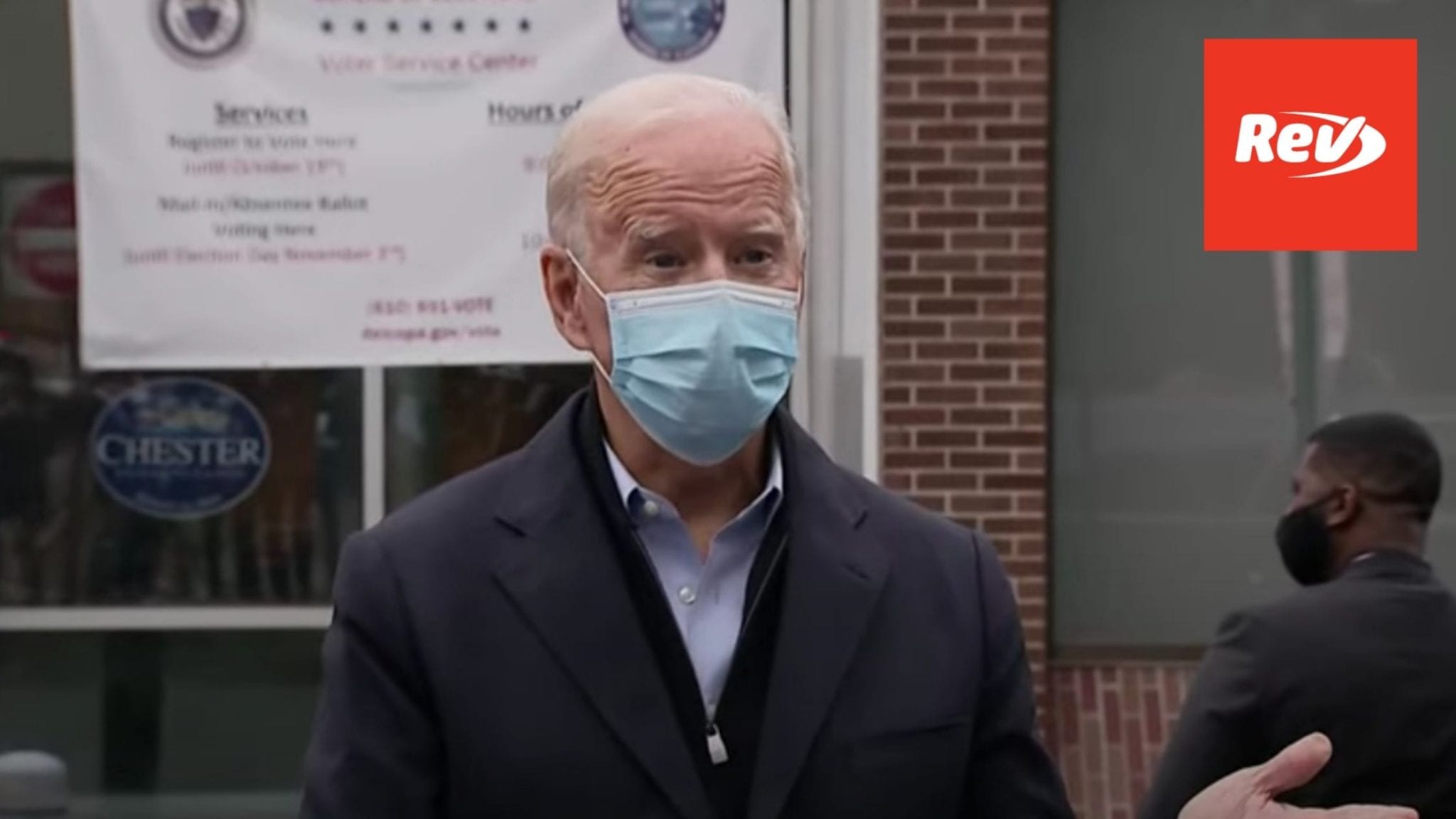 Joe Biden gave a speech at a campaign stop in Pennsylvania on October 26. He discussed President Trump’s response to the current national spike in coronavirus cases. Read the transcript of his speech here.

Joe Biden: (00:03)
Thanks for letting me be here. The state rep, the mayor’s here as well. I want to thank him very much. Look, yesterday, the White House Chief of Staff Mark Meadows went on television to admit to the country that the administration wasn’t even trying, trying anymore to deal with the pandemic. He said and I quote, “We’re not going to control the pandemic.” A Washington Post headline today says is, White House gives up on trying to slow virus spread. No caveats, just a deadly admission.

Joe Biden: (00:40)
Early in this pandemic some of you have had to cover me for a long time, Trump called himself a wartime president fighting a war against an invisible enemy. I’ve been saying for months as you well know that he waved the white flag all the way back then. He wasn’t doing much at all. Some people said I was being harsh, that I was being unfair. The White House was coming right out now and admitting what I said months ago was absolutely true. And look how many people are dead. 220,000 and it’s expected as many as another 200,000 could die between now and the end of the year.

Joe Biden: (01:22)
And he said, “We’re not going to control it.” Not going to control it. The bottom line is Donald Trump is the worst possible president, the worst possible person to try to lead us through this pandemic. I don’t think he just either doesn’t have any idea what to do or he just doesn’t care. On Friday, Dr. Tony Fauci, the nation’s most respected infectious disease expert publicly acknowledged that the president has not even met with his COVID team for months, for months. Even worse, Saturday, Donald Trump said that, “the COVID 19 count was wasn’t really going up. Everything was leveling out.” He suggested the doctors were inflating the numbers.

Joe Biden: (02:06)
Catch this. Because doctors get more money. What in the hell’s the matter with this man? A thousand doctors and nurses have given their lives trying to save lives. And he’s said the reason they’re talking about testing is that they want to make more money. Mr. President, more than 1,000 healthcare workers have lost their lives fighting COVID. Doctors, nurses, they’re not profiting, they’re dying. And you remember during the debate, whatever you want to call it that. During the debate, Trump said that, “We’re learning to live with this COVID.

Joe Biden: (02:50)
No. He’s asking us to learn to die with it. Folks, this has got to end. We can in fact end this crisis. If he would only get together with the House and Senate, work out a compromise on the spending bills that are out there in order to deal with everything from safely open our schools. It will cost $200 billion to do it, but it’s worth doing it. We should do it. We can lower class sizes, more teachers, ventilation PPP, the masks, gloves, all the sanitation. The businesses will be able to be open if we provide the same kind of help, which we said we would do.

Joe Biden: (03:31)
There’s so much more to do. Testing and tracing, we should be pouring billions of dollars into determining how we get rapid testing, rapid testing. So you know within hours whether or not the test is negative or positive. Many places you have to wait some from five up to six or seven days. He’s not doing what needs to be done. And look, folks, I promise you this. I’m never going to give up. You know, Mr. President, you have to have a little bit of shame, just a little bit of shame because people are dying.

Joe Biden: (04:07)
Here’s the point I want to make. Let me say it clearly. More people are going to die as many as 200,000 suggested by some. And it’s pointed out if you just wore a mask, kept social distancing, got tested where we can save within now and the end of the year over a 100,000 American lives. I’m not going to give up. I don’t know what we’ll inherit from January the 21, but the rate he’s going it’s not going to be good, but we’re going to be able to make.

Joe Biden: (04:43)
And by the way, I’m happy to take some questions from the press, but let me make it clear. I’m not shutting down oil fields. I’m not eliminating fracking. I’m investing in clean energy and we’re going to make sure that we don’t continue to subsidize the oil companies. There’s two estimates. They get somewhere between 25 billion and 40 billion in subsidies. That money should go in to making sure we do a lot of other good things. So with that, why don’t I take? Yes, sir.

Speaker 2: (05:15)
Thank you so much., Mr. Biden. You kept a relatively light public schedule in the past few days. Can you give us a sense of how much you’ll be traveling in the next few days where you might be going?

Joe Biden: (05:29)
I’m going to be going to Iowa. I’m going to Wisconsin. I’m going to Georgia. I’m going to Florida and maybe other places as well. There’s a lot we’ve been doing as well in terms of being online and social … excuse me. Everything from fundraising efforts to making sure we meet. I met today with a group of leaders in the democratic party laying out where we’re going to go, getting their input and like so. We’re constantly, there has not been a day that hadn’t been a 12-hour day yet.

Speaker 3: (05:58)
Mr. Vice President, are you confident enough in your standing in states like Pennsylvania, Wisconsin, Michigan to be expanding the map and traveling to Iowa?

Joe Biden: (06:43)
So fortunately because of over six million individual voters, average contributors, average contribution $49, we’re able to compete like we haven’t been able to compete before in all these different states. So that’s why I said we’re going to be traveling, continue to travel. But the big difference between us and reason why it looks like we’re not traveling, we’re not putting on super spreaders. We are doing what we’re doing here. Everybody’s wearing a mask and trying as best we can to be socially distanced. And that’s what we’re doing. You’ve attended a number of our press conferences as well. It’s important to be responsible.

Speaker 4: (07:23)
Mr. Vice President, you mentioned just a minute ago there as part of your commission, you would look at how long justices serve on the court. Does that mean that you’re hoping to term limits?

Joe Biden: (07:32)
No, no, no, no, no. There is a question about whether or not it’s a lifetime appointment. I’m not going to attempt to change that at all. There’s some literature among constitutional scholars about the possibility of going from one court to another court, not just always staying the whole time in the Supreme Court. But I have made no judgment, my word. My word is about I made no judgment. There are just a group of serious constitutional scholars who have a number of ideas how we should proceed from this point on. And that’s what we’re going to be doing. I’m going to give them 180 days god willing if I’m elected from the time I’m sworn in to be able to make such a recommendation.

Speaker 5: (08:11)
[crosstalk 00:08:11] Do you have any reaction to President Trump planning an outdoor event at the White House tonight to celebrate the anticipated confirmation of Judge Barrett?

Joe Biden: (08:30)
Look, If you have children and you were raised, all parents are taught that the example you set impacts on how your kids react. When you’re a boss of an operation, the example you set, what you do matters to the rest of the company. Well, the words of a president and the actions of a president, they matter and matter a great deal. And when the President of United States puts on these super spreader events, you saw what happened when she was announced. All the people, including his family, thank God they seem to be okay. All the people came down with COVID.

Joe Biden: (09:15)
I just hope he is willing to have learned a lesson and there’ll be significant social distancing. I don’t blame him for celebrating. There’s a lot of things we could be doing with having massive crowds, but the fact is that it’s just not appropriate now. I just hope he and the vice president and others act with some dispatch and do it what everybody knows. People should be tested first before they even show up, number one. Number two, they should be wearing masks. Number three, they should be socially distanced. And number four, it shouldn’t be a huge crowd, whether it’s outside or not. Thank you all very much. I appreciate it.