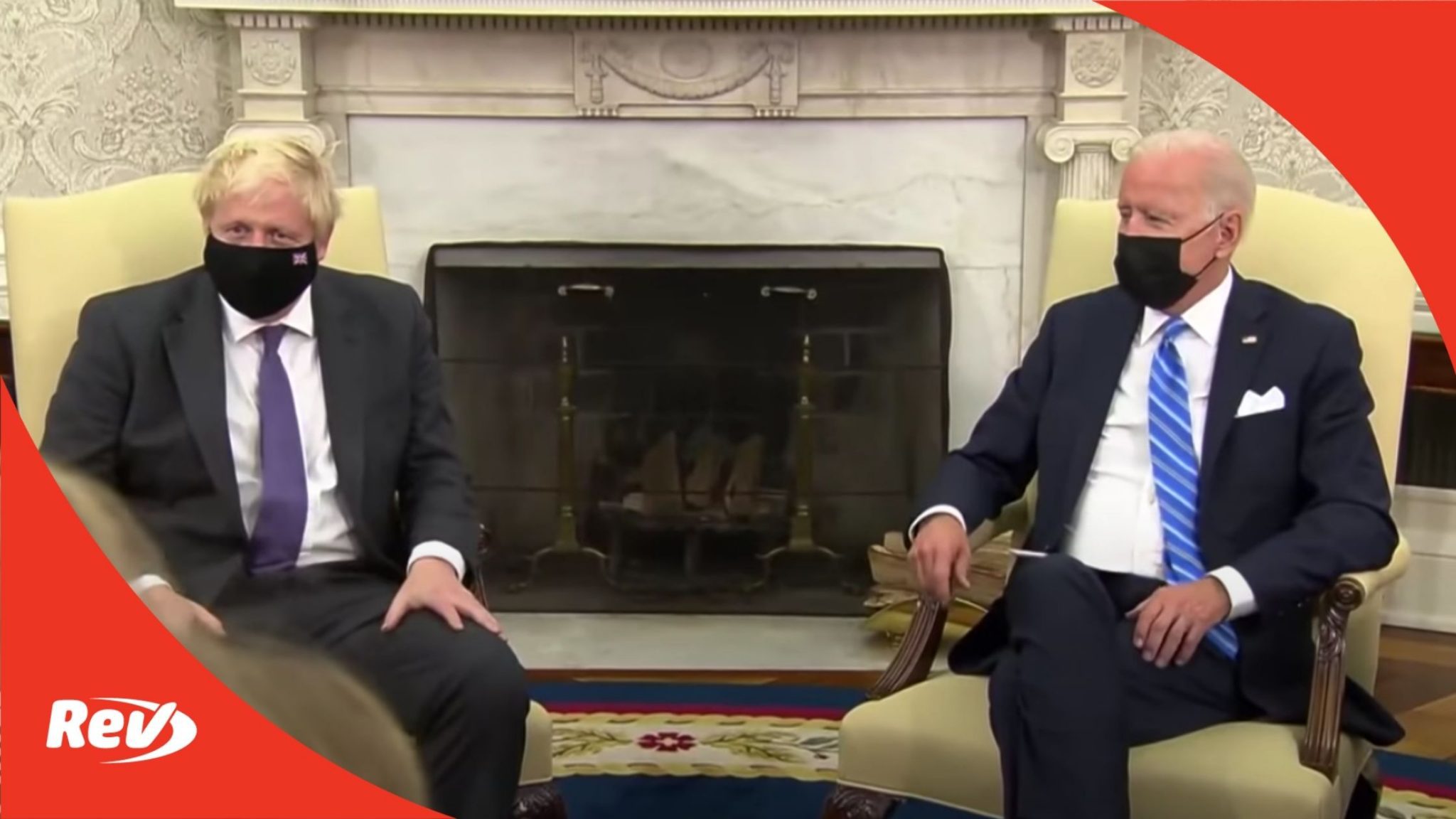 President Biden: (00:00)
I’m honored to have a chance to have him here. He returned a small amount of hospitality compared to all the hospitality he provided for the G7 and our families in Cornwall. And since then our countries have worked with close cooperation on a whole range of things in our fellow democracies. We continue to work on, and we’re going to talk about today, the ambitions we made out at the G7 and we’re turning to our revitalized Atlantic Charter to make it something to turn into real action. So it plays a major role with the challenges we face.

President Biden: (00:42)
Earlier today, I addressed the United Nations General Assembly, and I made clear the climate has to be the core area of action for all of us. As we look ahead to UK-hosted COP26, which I am really anxious to attend in Glasgow in November, Mr. Prime Minister.

President Biden: (01:04)
With bells on, as they say. We’re going to also … Our economies have to work together, including through our Build Back Better World Initiative that we launched at Carbis Bay. Today we’re going to discuss the next steps on all of this, and as well as how the US and UK can continue our cooperation in Afghanistan and the Indo-Pacific and around the world. I want to thank you again, Boris, for making the effort to be here. And I understand, Boris, I just want you to know Boris, you came down on Amtrak, is that right?

President Biden: (01:52)
Well, they should. I travel more on Amtrak. I think if I were conductor, I’d be number one in seniority. I got to tell you a quick story that has nothing to do with anything. When I was vice president, the secret service didn’t like me traveling on Amtrak because there we’re too many options for people to cause trouble along the way, but I insisted I do it. One day they put in the newspaper, “Biden travels 1 million … I think, don’t hold me to exact numbers, I think it was 350,000 miles on Air Force Two. And walking up to getting on the train on that Friday, and a guy who was the number three guy from New Jersey on seniority as a conductor, walked up and grabbed me, and he goes like this, “Joey, baby.” Grabs me cheek. I thought the secret service was going to shoot him.

President Biden: (03:16)
I thought they should name the railroad after me or something, but anyway.

Prime Minister Johnson: (03:19)
They named a station after you.

Prime Minister Johnson: (03:23)
It’s big news there. Anyway. Joe, I want to thank you. I share your belief in transport infrastructure, particularly trains. I want to thank you very much for the warm welcome today, and it’s great to be with you in the White House. This is a very important trip for us in the UK. And we’ve seen some great progress just in the last period. It’s great that the ban has been lifted on British beef and the people of the United States of America can eat British beef.

Prime Minister Johnson: (03:56)
And the lamb. We’re working on the lamb. But what you did with the travel so that people can travel to the US with two jabs, is also fantastic and very welcoming. We’ve be working on that for a long time. But I think the most important thing today has been your speech, Joe, to UNGA, where you made a commitment on supporting the world to adapt to climate change, doubling the American commitment. Very important for us. We made a 11.6 billion pound commitment I made when I first became prime minister, but it’s fantastic to see the United States really stepping up and showing a lead, a real, real lead. Then of course, there’s the progress that we’re making in the defense technology partnership that you’ve led with our Australian friends that I think has great potential to benefit the whole of the world and the security of the whole of the world.

Prime Minister Johnson: (05:04)
So, Joe, thank you for having us. I think we’re boosting our shared agenda. We want to build back the world together with you. I think we want to renew and strengthen our transatlantic bond. It feels to me like it’s going very, very well. But I think, would it be okay if we just have a couple of questions? Just a couple of questions.

Harry Cole: (05:59)
And may I just ask, what possible justification is there for Anne Sacoolas not to be exiled to the United Kingdom to face justice in the death of Harry Dunn?

President Biden: (06:18)
Based on what I’ve been told, it was not an intentional act. It was someone who is new to driving on the wrong side of the road, quote unquote. But, I’ll follow up on that. I express my sympathies when it occurred, but I don’t know the status of that case right now. The other question was?

President Biden: (06:44)
A Brexit free trade … Well, we’re going to talk about trade a little bit today, and we’re going to have to work that through.

Prime Minister Johnson: (06:51)
Let me just stay on that, Harry, I mean, don’t forget folks, we’ve, settled the Boeing Airbus thing, which was a massive problem between us and we were making a lot of progress. To say nothing of the beef and the whiskey, which I already mentioned. Just to kind of say one-

Prime Minister Johnson: (07:11)
He’s a grade-A ambassador for them. But on the Harry Dunn case, which is a very sad case. And everybody’s sympathies are with the family of Harry Dunn. I know that the president has been personally trying to move things along and I’m grateful for that. We’re going to take one more question. I’m going to go to Beth.

Beth: (07:35)
Thank you. President Biden, President Trump said that the UK was in front of the queue when it came to it to a trade deal, you seem to have a different approach. Is that because of your heritage, your concern about the Irish protocol, is that what’s holding it back when it comes to doing this deal with the UK?

President Biden: (07:58)
There are two separate issues. On the deal with UK, that’s continued to be discussed. But on the protocols, I feel very strongly about those. We spent an enormous amount of time and effort in the United States. It was a major bipartisan effort made. I would not at all like to see, nor I might add would many of my Republican colleagues like to see a change in the Irish courts, at the end result having a closed border again.